I could not believe when the Banana – Plantain plant that was growing in one patch of our garden flowered one day. 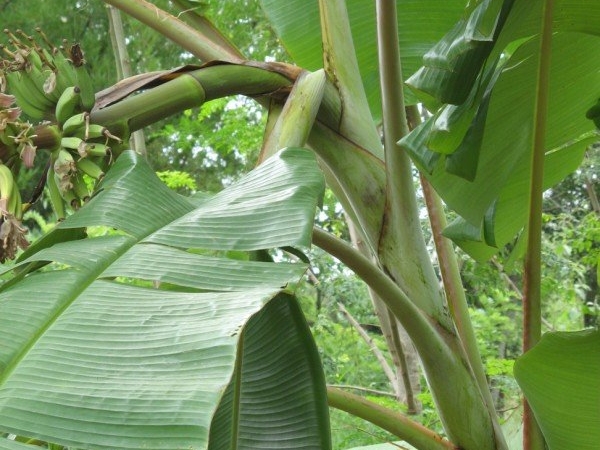 We kept a vigil for the flowers to convert into fruit and we were successful in harvesting few bunches of Banana. I have used the leaves of this plant to serve food and prepare dishes, which involved wrapping in Banana leaf and steaming. 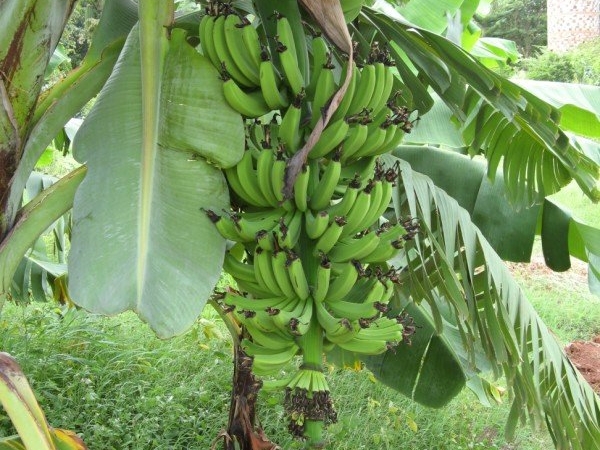 Banana is considered a complete meal and parents ensure that children have at least one Banana a day. This is because, the Banana fruit is power packed with goodness, which gives instant energy. The botanical name is Musa paradisiaca and belongs to the family Musaceae (Banana). Banana is a native of Africa and South East Asia but is grown all over the world for the edible fruit. There are around 70 species of Musa family including plants cultivated for its ornamental value. The propagation of Banana is through shoots from the rhizomes also known as corm. The trunk of Banana plant is a pseudostem (false trunk). Fully grown plant reaches a height of 10 to 30 feet. The leaves are large and the base of the leaves overlap and forms the false trunk. Stalk (petiole) and blade (lamina) are the parts of the leaf. Leaves are spirally arranged and grow up to 9 feet long and 2 feet wide. From the center of the mature pseudostem a stem develops and grows inside and eventually emerges at the top as the Banana flower. Only female flowers develop into a Banana fruit. The inflorescence contains many bracts between rows of flowers. A bunch of Banana is made up of 3 to 20 tiers called hands with around 20 fruits per tier. The fruit varies in size depending on the variety and is elongated and curved. Soft flesh rich in starch is covered with a skin (peel), which may be green, yellow, red, purple, or brown when ripe. Thin strings are attached between the skin and the soft flesh. After fruiting, the pseudostem perishes, but offshoots develop from the base. Uses:
Raw and ripe Bananas, Banana stem, and Banana flowers are used for cooking around the world. The leaves are used as a wrapper while cooking and the leaves are extensively used as plates to serve festive food in South Indian states. The strands of the Banana stem are used to tie flowers into a garland. The whole banana plant called as Bale kandu in Kannada is used during festivals and they are tied or placed on either side of the presiding deity, which is considered auspicious. Banana fruit along with other fruits are offered to gods and goddesses. Cut Banana fruit is part of the Phala Panchamruta.  Banana bunches also known as Banana Chippu in Kannada is given to expecting mothers during baby shower. Banana bunches is also distributed to friends and neighbors during Shankranthi festival. All this frenzy over the humble Banana shows the goodness and popularity of the fruit from time immemorial.