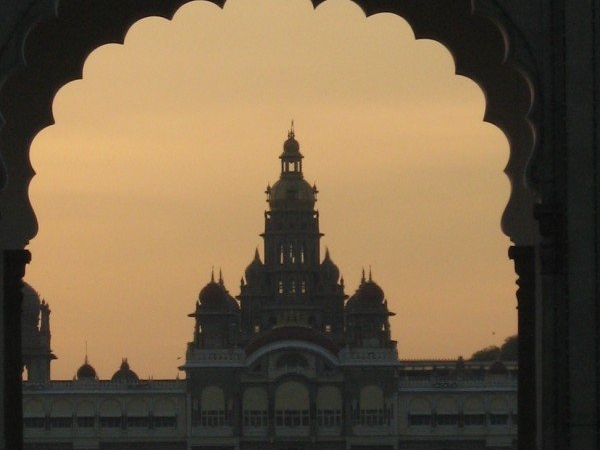 Ambavilas / Mysore Palace complex comprises of many Hindu temples. The oldest temple was built in the 14th century and the newest one was built in 1953.  Kote Anjaneyaswamy and Kote Ganapathi temples located near the North Gate / Balarama gate of the palace are very popular among the citizens of Mysore.

I have a lot of attachment to these temples of Mysore Palace as we used to visit them often, as it was a few blocks away from where we lived.  My grandmother was a devotee of Ambujavalli the presiding goddess of Shwetha Varahaswamy temple and she would often give Abhishekha in the temple and we would all congregate and spend half a day there taking part in the pooja and relishing the delicious prasada / blessed food.  Even now we make a point to visit the place and offer saree to the goddess.  I also remember going to the Mariamma temple with a group of street friends as we were all cured of Chicken pox at the same time and it is believed that the cured need to visit this temple and offer tender coconut water to the goddess as thanksgiving.  The purpose of visiting Kote Anjaneya temple would be to get a charged talisman tied around the neck from the priest who would tie and splash a handful of thirtha / sacred water on the face with a shout accompanying it.  It is believed that the talisman would protect from diseases and fear.

My brother-in-law is a great devotee of Kote Ganapathy and is sure to make a bee line to the temple every time he visits Mysore for a Benne Seve / Butter decoration to the idol.

Information compiled on some of the temples of Mysore palace is as below. 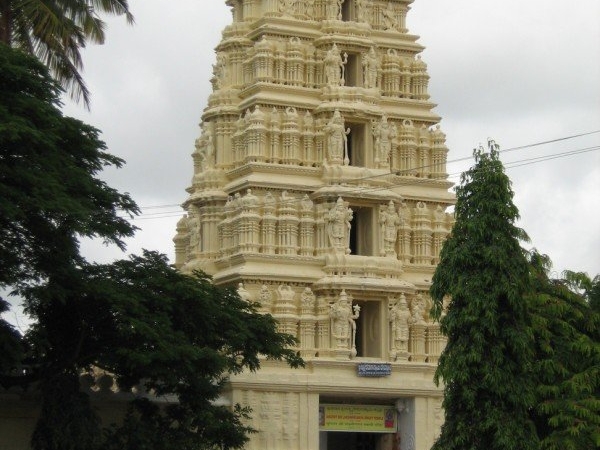 Lakshmiramana Swamy Temple: It is one of the oldest temples in the city dedicated to Nambinarayana / Vishnu located on the western part of the palace.  The temple was built in 1499 by the order of King Narasa Nayaka of Vijayanagar who was the father of Krishnadevaraya.  In 1851 the temple was renovated the Mahadwara tower.  The Maharajah’s 2 feet tall idol is installed in the temple.

The idol of Nambinaryana is holding the discus and the conch.  Another shrine is dedicated to goddess Lakshmi.  A 4 feet idol of Venugopala / Krishna is also installed in this temple.  This temple has also witnessed an historical event, which is the coronation of 5-year-old Krishnaraja Wodyar III by the Britishers in 1799 after the death of Tipu Sultan.

It is believed that prayers at this temple are always answered. 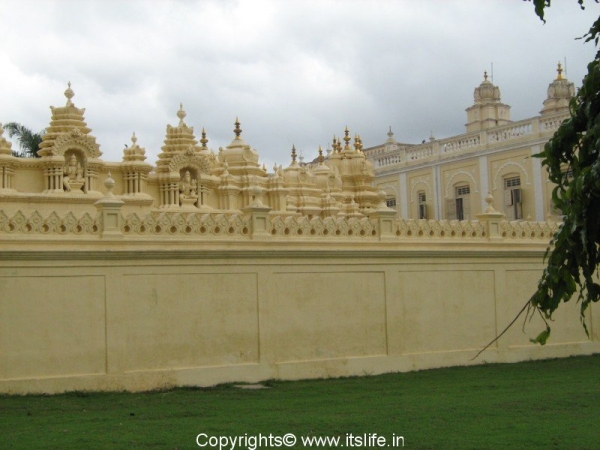 Prasanna Krishnaswamy Temple: Krishnaraja Wodeyar III built Prasanna Krishnaswamy Temple in 1829.  The idol of Krishna is in the crawling pose with butterball in the hand.  It is said that when Krishnaraja Wodeyar visited Mallur he was fascinated by the beauty of the crawling Krishna idol installed there and he ordered men to remove the idol from Mallur to be taken to Mysore.  Even though hundreds of men tried to move the idol from its place, it did not budge a millimeter.  Maharajah gave up the idea and got another idol of crawling Krishna in chlorise schist installed in the temple. 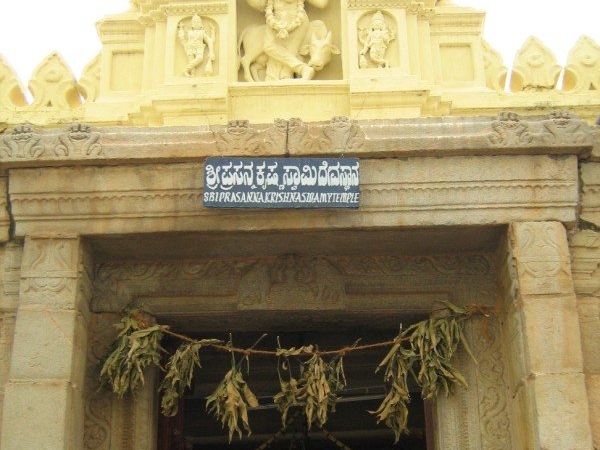 There are around 40 bronze images of gods, goddesses, saints and sages in the temple.  The figurines of Krishnaraja Wodeyar along with his wives are still worshiped in the temple.  Another shrine is dedicated to Sage Atri who was the priest of the Maharajah and his gotra was Atreya same as that of the Mahrajaha.  There is another shrine with idols of Ramanujacharya, Paravasudeva, Anathasavna and Rajamannar.

The central pillared hall of this temple has the traditional Mysore paintings done on the walls.  The paintings portray the stories of Bhagavatha (life history of Lord Krishna).

Grand celebrations are held during Krishna Janamashtami festival for 8 days.  Govina Utsava / cow procession is a major attraction during the festivities. 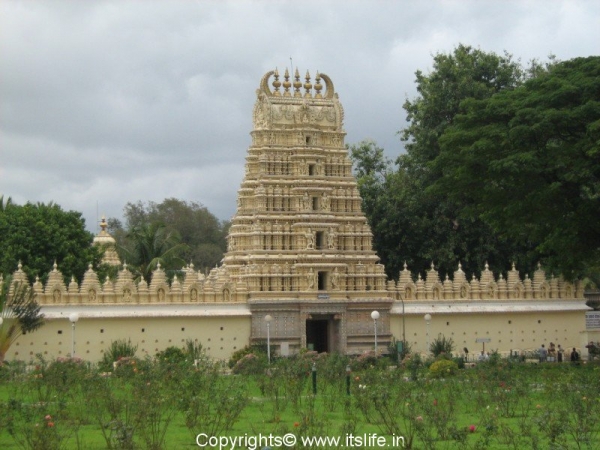 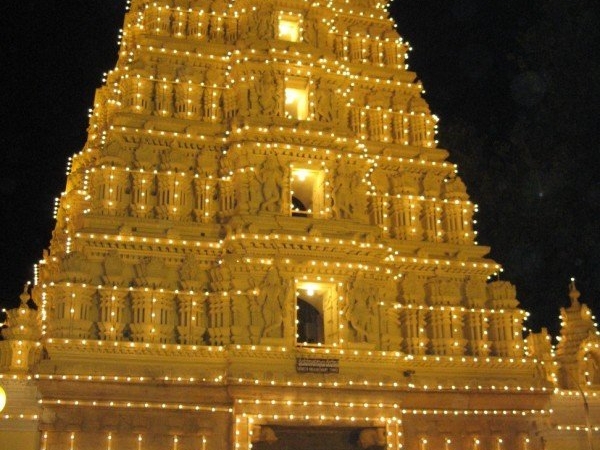 Dewan Purnaiah using materials of a Hoysala building in Shimoga district built Varahaswamy Temple.  Then Mysore King Chikka Deva Raja Wodeyar (1672-1704 A.D.) procured the stone image of Sweta Varahaswamy from Srimushnam in Tamil Nadu and installed the idol in a temple in Srirangapatna.  However, this temple was demolished and the idol was shifted to Mysore and set up in this temple in 1809.

In the navaranga (pillared hall), Mysore paintings decorate the walls.  The temple is within a high walled enclosure and the southeastern wall has a mural representing Rama Pattabhisheka, the coronation of Lord Rama. The painted inscription below the panel states that the painting was executed on Monday the second of the bright half of the month Magha in the cyclic year Bhava of Saka era 1797 (1875). 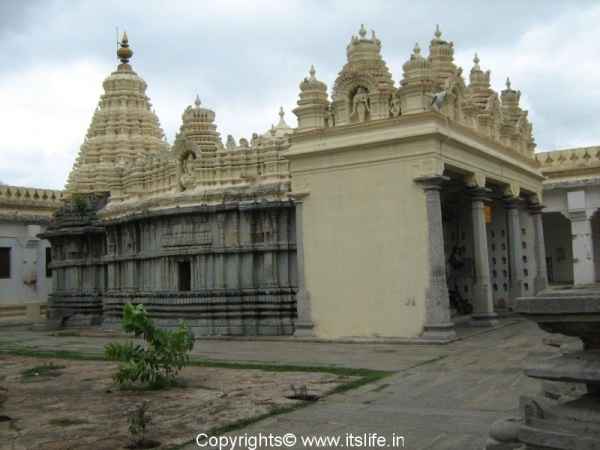 Ambujavalli Temple: This independent shrine inside the compound of Varahaswamy temple is dedicated to Ambujavalli / Lakshmi consort of Lord Varaha.  The temple is beautiful with reflections of the Hoysala architecture.  The doorway to the shrine is carved sophisticatedly.  Well-proportioned pillars and tower form the temple.

The pillared hall of this temple also has paintings on its walls. The paintings represent scenes from Ramayana and Bhagavata / stories of Lord Krishan. The temple has images of Acharyas/ Masters – Deshikar and Jiyar, both Srivaishnava teachers with inscriptions. 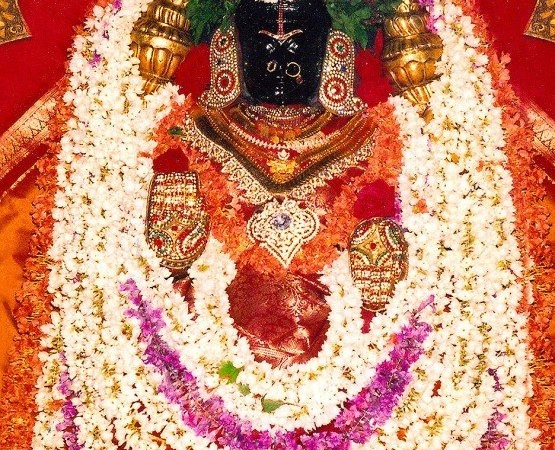 It is believed that by performing the seva / service, pradakshina namaskaram / circumambulate and having the darshana / view of Goddess Ambujavalli one can overcome their problems troubles/hurdles/difficulties in life and acquire peace of mind.

Gayathri Temple: This temple is the latest built in 1953 by Jayachamaraja Wodeyar.  He was a great devotee of the goddess and installed the idols of Savitri, Gayathri and Lakshmi sculpted by Siddalingaswamy in the temple.  He named his daughter Gayathri Devi.  ( Late Maharaja Kumari Gayatri Devi was married to Sirdar Ramachnadra Raj Urs adopted son of Rajkumari Leelavati and Sirdar Basava Raj Urs. He is very much a Mysorean and still lives in Mysore at his Bungalow named as Leela Vihar in Jayalakshmi Puram. – This information is as per reader Mr. R. Rajachandra)

Trinesvaraswamy Temple: This Dravidian styled temple is situated to the northeast of the palace dedicated to Lord Trinesvaraswamy / Lord Shiva.  It was in existence even before Raja Wodyar (1578-1617).

An idol of sage of Trinabindu is present to the left of the Sukhanasi entrance.  According to folklore, Sage Trinabindu performed penance at this spot and Shiva appeared before him.  The sage then consecrated the Linga here. Hence, the Linga / representation of Shiva is known as Trinesvara or Trinayanesvara, the three-eyed Shiva. Facing the south entrance is a cell, which contains the metallic figure of the god and two goodu / niches containing figures of Ganapathi flank it.

Mahashivaratri festival is celebrated on a grand scale and special worship is arranged for every three hours during jagarane / keeping awake the whole night till early morning.

Kodi Someswara Temple: This Temple is situated in the northeast side of the palace. It consists of three shrines / chambers.  The middle shrine is dedicated to Someshwara / Shiva and the shrines on either side are dedicated to Goddess Somasundari / Parvathi and Lord Narayana / Vishnu. The navagraha / 9 planets is also installed in the temple.  Jayachamaraja Wodeyar used this temple during Dasara for religious rituals during the daily Durbar.

Kodi Bhairava Temple: This is the oldest temple and is part of the beginning of the Wodeyar dyanasty in Mysore.  According to the temple legend, the princes from Dwaraka in Gujarat by name Yaduraya and Krishanaraya took shelter in this temple just before they fought the Kurugahalli chieftain.

The temple is situated to the Northeast of the Palace and is dedicated to Lord Shiva.  “Kodi” in Kannada means a wall or barrier of Doddakere maidan /dried tank bed on which the temple was built.  Yaduraya married the princess and became the progenitor of the Yadu dynasty. This little shrine has an image of Bhairava of about a metre height. In its four hands are a trident, a drum, a skull and a sword as its attributes. It is flanked on the left by the image of Bhadrakali, holding a sickle in her uplifted right hand and on the right a female chauri-bearer.

Bhuvaneswari Temple: This temple is located on the northern side of the Palace dedicated to goddess or earth Bhuvaneswari.  This temple was built in 1951 by Jayachamaraja Wodeyar in Dravidian style.  The services of the famous sculptor Siddalingaswamy was called for to sculpt the idol of the goddess.

Idols of Gods and Goddesses like Surya, Vishnu, Maheswara / Shiva, Rajarajewari, Ganapathi and Chamundeswari are also installed in the temple.  Jayachamarajendra Wodeyar gave a copper Surya Mandla plate, which was in the possession of the palace, to the temple.  This plate is offered special pooja on Rathasapthami festival that falls in Feb – March every year. 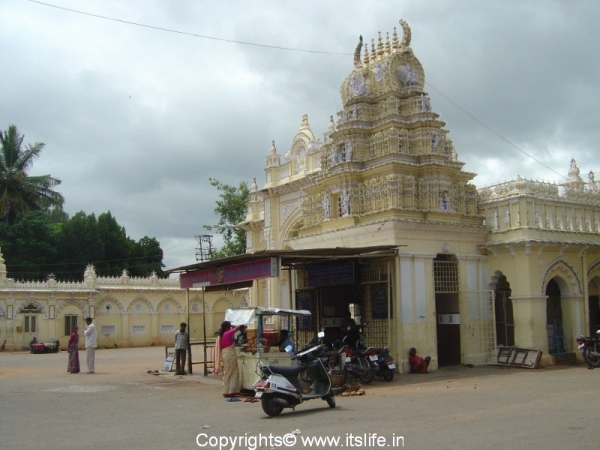 Kote Anjaneya Temple: The temple of Anjaneya / Hanuman is situated to the north of the palace, near the Balarama Gate.  On Amavasya a special pooja is performed and the thaithas /talisman to be given to the devotees are charged by chanting of powerful mantras. Kote Anjaneyaswamy has its share of Muslim devotees too as the divine being is believed to cure diseases by tying the thaitha.  This goes to show that Mysore was a city, where people of different cultures lived in harmony without any political twists.  A grand celebration is held during Hanuman Jayanthi.

Kote Ganapathy Temple: The temple though very small with a small yet glowing Ganesha idol is very popular among the people.  It is situated on the left side of Balarama gate.

Mariamma Temple: This temple is situated outside the palace fort facing to the road   dedicated to Mariamma or Parvathi in a more aggressive mood.  She is the protector of the people from all diseases.  People after they are cured of diseases like chicken pox or measles visit the temple and offer tender coconut water on the stone installed in the shrine representing Mariamma.  This ritual is known as “thannir yereyuvudu” / pouring tender coconut to cool down the goddess.

You have stated : He named his daughter Gayathri Devi, who later was married to a King in Rajasthan.

Late Maharaja Kumari Gayatri Devi was married to Sirdar Ramachnadra Raj Urs adopted son of Rajkumari Leelavati and Sirdar Basava Raj Urs. He is very much a Mysorean and still lives in Mysore at his Bungalow named as Leela Vihar in Jayalakshmi Puram.

It should be Maharaja Kumari not Maharani Kumari ! This is the way Royalty in India used to call the Maharaja’s children (Maharaja Kumar / Kumari ). English word Prince / Princess is used in much wider sweep. Take the instant case where Raja Kumari ( princess) Leela Devi was the only child of Maharaja Kumari (Princess) Jayalakshammanni and Diwan M. Kantha Raj Urs.

Wow…that is so interesting. Thank you Sir!