Beautiful green blades of paddy swishing to the music of the wind and Egrets dotting the field to feed on insects or the left over seeds is a common scene you encounter as you travel in South and East India countryside.

The presiding deity in Udupi Lord Krishna is known as Anna Brahma (provider of cooked rice) as thousands of devotees are fed everyday with hot steaming Rice drowned in a delicious lentil soup or curds.

Rice grains are used to worship god, offered to the departed, offered to gods and goddesses, and is consumed for sustenance. 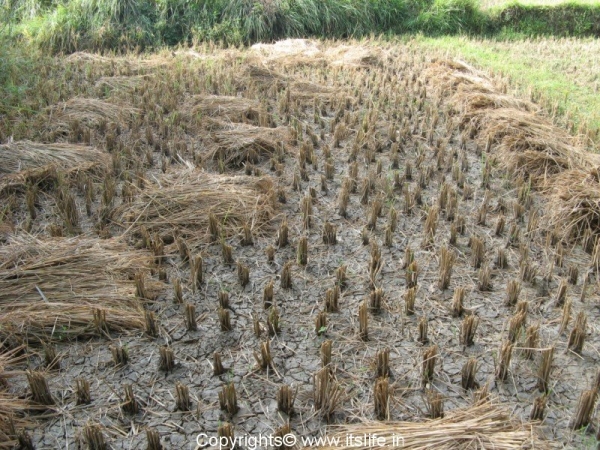 Rice is the seed of the grass species Oryza sativa (Asian) or Oryza glaberrima (African). Genetic evidence in China shows that it has been around for the past 13,500 years. 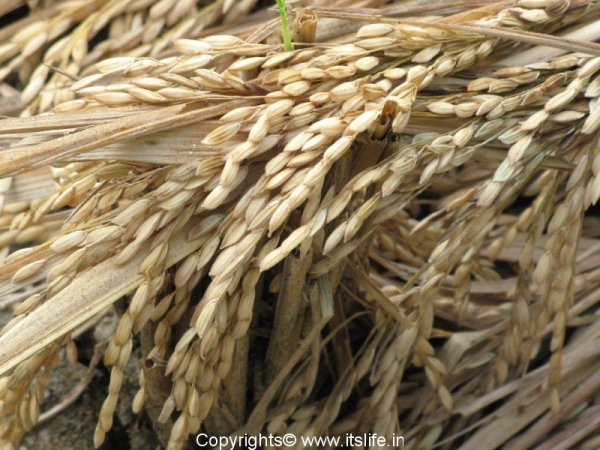 Now, Rice is one of the most important crops of the world and is consumed by half the population of the world. Top three rice producing countries are China, India, and Indonesia. Cultivation is best suited in countries with high rainfall and low labor costs.

Rice requires above 20 °C but not more than 35 to 40 °C to grow. Plant grows to about 5 feet tall and the leaves are green when young and turn yellow when mature and are slender blades. The delicate white pendulous inflorescence is about 20 inches long. 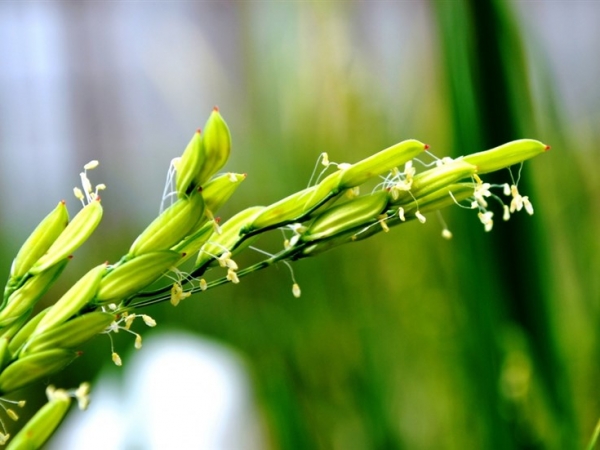 The fruit is again in a group with the wondrous edible seed or grain is capsuled in a rough skin known as husk or bran. 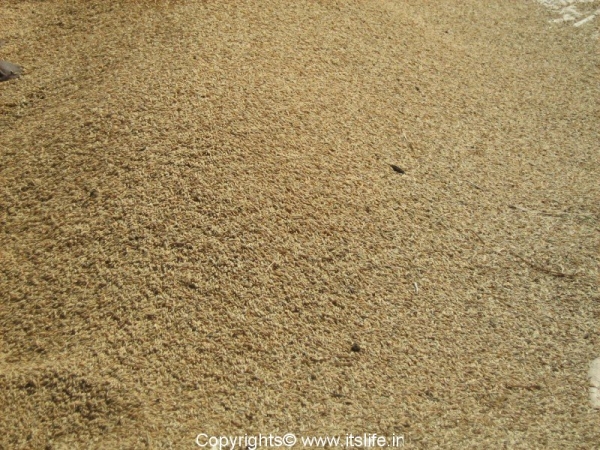 Paddy (Rice with husk) is hand and machine harvested. It is common in India to see Paddy spread on the road  to dry and when vehicles zip over them, the grain is separated from the plant. Sometimes it is very annoying as the paddy layer can be over a feet high. Later, the dust and the paddy grains are separated by hand winnowing. 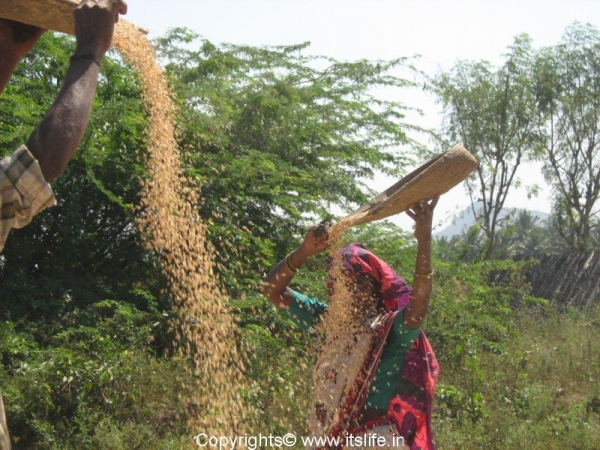 This is usually done for the consumption of the family. There are also Rice mills, where the Paddy is dried and the husk separated using machines. Rice accordingly is stored raw or the paddy is steamed before it is separated from the husk.

Rice is available in different aroma, shapes, size, and colors. The varieties of rice are classified as long, medium, and short-grained. These can be either raw or steamed. The older the Rice is stored; it is better for consumption and is more expensive. Wild rice is a variety, which was grown wild but the same species is now domesticated and is widely used mainly for its crunchiness. 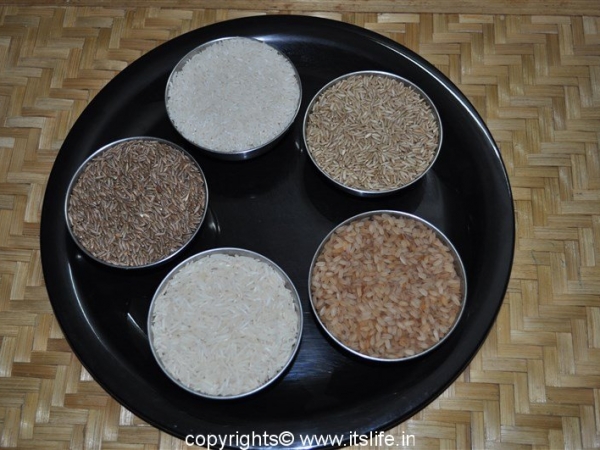 Rice is rich in carbohydrates and unpolished Rice is rich in antioxidants. It is the staple food in many countries and can be cooked to make innumerable dishes from starters to desserts. It is comfort food for many and easy on the digestive system. It can be consumed when hale and hearty and also consumed when sick. 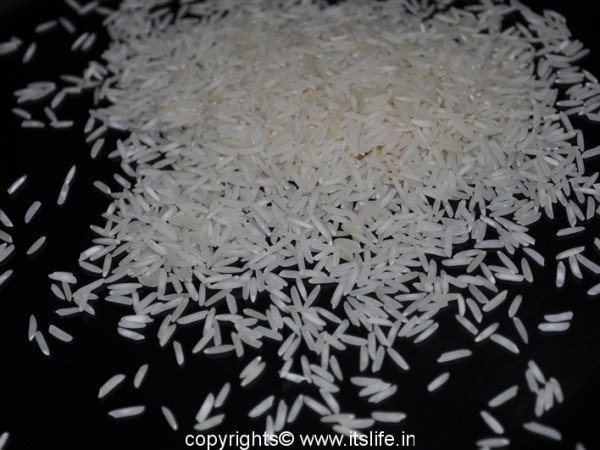 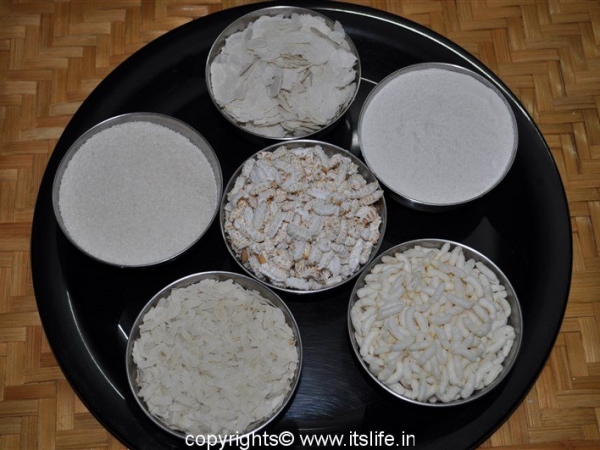 Black Rice is flavorful and is widely used to make salads.

Rice wine or toddy is prepared in Kerala and Philippines.  Oil extracted from Rice bran is good for the heart. 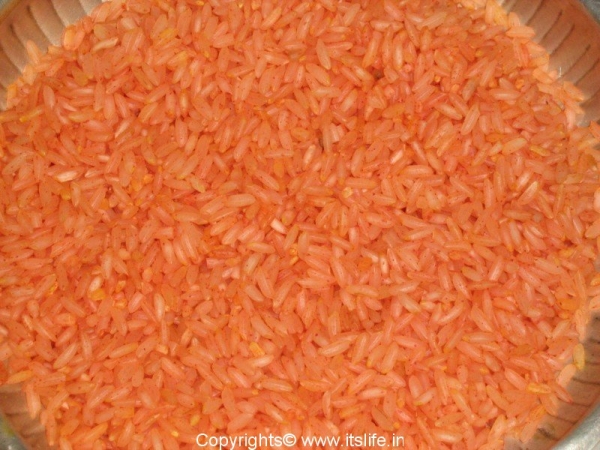 Picture above: Manthrakshate: it is used to worship god

Anna or cooked rice is the main course in any of the auspicious and not so auspicious ceremonies. Both types of ceremonies appease the living and the dead by offering anna. Hence the following shloka (chant) is apt to show the importance of Annadana (serving of rice):

The meaning of the above shloka is as follows: annadaana is greater than donating many horses, elephants, gold ornaments, vessels, land, education, or daughter in a marriage (kanyadhanam).