There are many temples in Pondicherry. Many of them were built during the reign of Cholas in the 10th Century AD.

Manakula Vinayagar Koil
The strinking gopuram painted with bright colors greet you at this temple. The temple was built 300 years ago dedicated to the popular God Ganesha. People in large numbers come here to worship and pray. 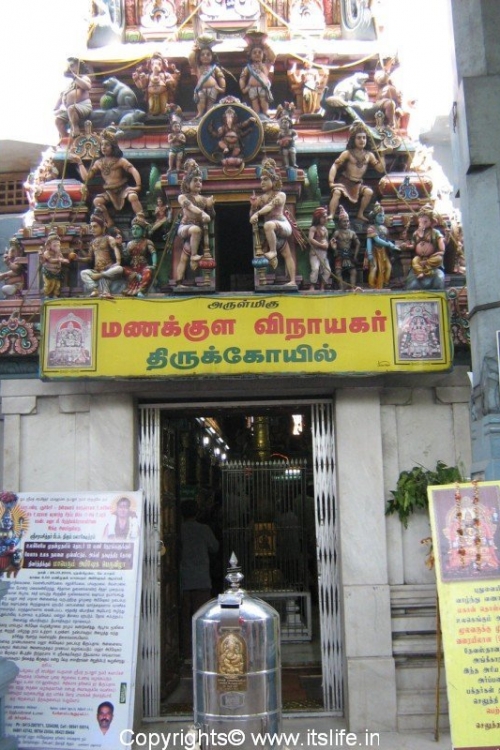 The temple also has shrines dedicated to Murugan and goddess Lakshmi. A decorated temple elephant blesses devotees by a pat from its trunk for an exchange of a coin.

Kamatchiamman Temple
This temple dedicated to Goddess Durga / Parvathi, is a contrast compared to the other colorful temples found in the city. This temple is rust colored giving an antique look and is located on Bharathi Street.

Varadaraja Perumal Temple
In the middle of the city on M.G.Road, is the oldest temple of Pondicherry dedicated to Lord Varadaraja Perumal / Lord Vishnu. The Dravidian style temple was built in 600 AD complete with colorful Gopuram and sculpted pillars. There is a separate shrine for Lord Narasimha.

Vedhapureeswarar Temple
This temple also located on M.G.Road is also known as Eashwaran koil and dedicated to Lord Shiva. 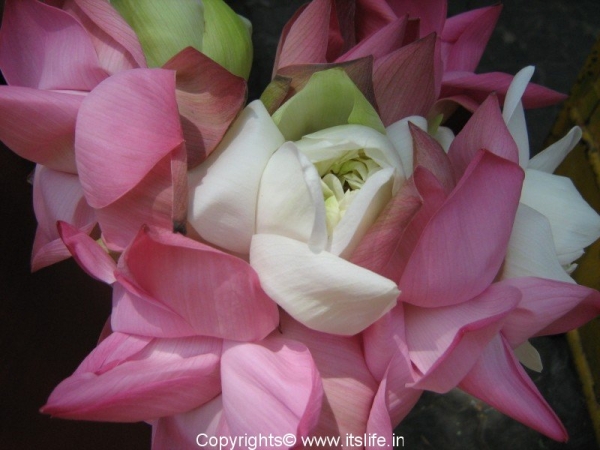 Picture – Lotus flowers sold by hawkers in front of temples

Kanniga Parameswari Temple
Yet another temple on M.G.Road, this temple is dedicated to goddess Parvathi, consort of Lord Shiva. The architecture of this temple is unique as it is a blend of French and Tamil styles.

Sri Gokilambal Thirukameshwara Temple
This temple is situated 11 Km away from Pondicherry in Villianur town and is dedicated to Lord Shiva, Parvathi and Murugan. It was built by the Cholas in the 12th Century.

The annual car festival is held on the full moon day during May and June. On this day the 15m tall chariot is pulled by the people in a procession on the streets. During the French rule the Governor used to actively participate in the festival by drawing the chariot. This tradition is still followed and the current Lieutenant Governor of Puducherry participates in the festivities.

[…] Dedicated to Lord Vishnu, Sri VaradarajaPerumal Temple is the most ancient temple in Pondicherry. The history of the temple dates back to as early as 600AD and you have to come to the temple just to look at the majestic Dravidian style of architecture. This temple complex is huge. • Timings – 5AM to 10.30PM • Entry fee – Free • Website – http://www.itslife.in/travel/temples-in-pondicherry […]