Sri Ranganathaswamy Temple is situated in the historical island town of Srirangapatna, Mandya district.  Srirangapatna is 15 Km away from Mysore. 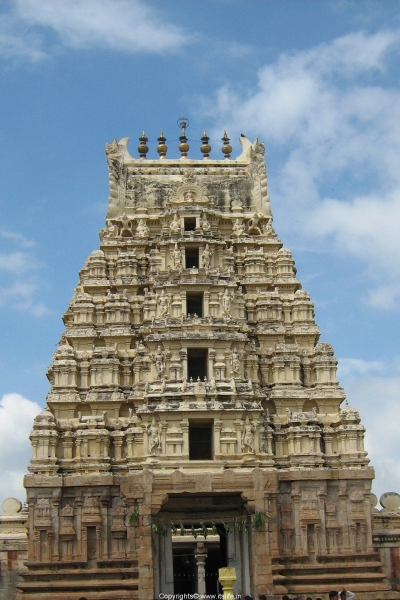 The Sri Ranganathaswamy temple comprises of the Navaranga mantapa surrounding the sanctum sanctorum.  The presiding deity Sri Ranganatha is in a sleeping posture on Adi Shesha, the seven-headed serpent.  An idol of Goddess Lakshmi is installed at the foot of Lord Ranganatha.  The presiding goddess of the temple is Goddess Ranganayaki.  A diamond nose ring gifted by Alumelamma wife of Srirangaraya the viceroy of Vijayanagara empire is still worn by the goddess. 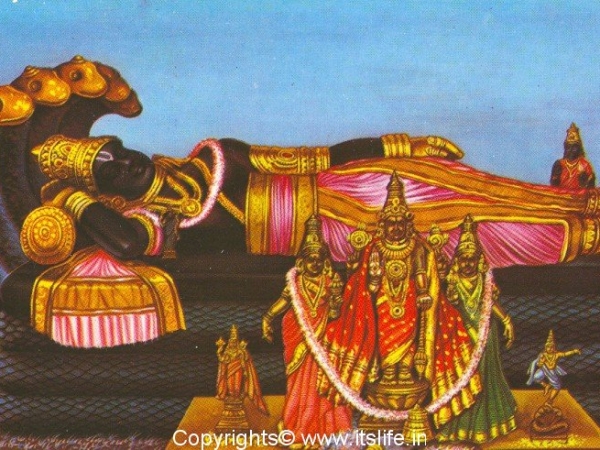 The temple was built during the 9th century by kings of Vijayanagara Empire and then maintained and expanded by Hyder Ali, Ganga dynasty and Hoysala dynasty.  Hyder Ali was a great devout of Lord Ranganatha and made a lot of contributions and donations to the temple.  There are many shrines inside the temple dedicated to other gods and gurus like Panchamukha Hanuman, Sri Krishna, Lord Srinivasa, Alwars and Vaishnava Acharya/Gurus of Vaishanava faith. 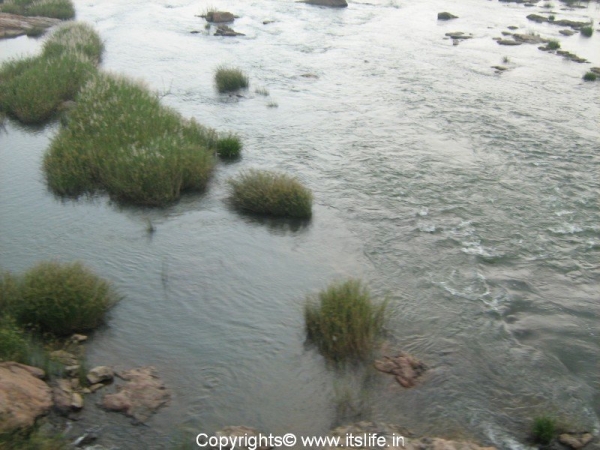 River Cauvery has formed three big islands on her journey from Talacauvery to join the Bay of Bengal Sea.  The islands are Srirangapatna, Shivanasamudra in Karnataka and Srirangam in Tamil Nadu.  All the three islands are pilgrimage centers with temples dedicated to Lord Ranganatha.  These three temples are known as Adi Ranga/first Ranganatha at Srirangapatna, Madhya Ranga/Middle Ranganatha at Shivanasamudra and Anthya Ranga/Last Ranganatha at Srirangam.  It is believed that people who visit the three temples in one day gain moksha/Salvation.

Every year in the Hindu month of Dhanur i.e., January a grand utsava/festival to the Lord, is held known as Kotarothsava.

The other temples of Srirangapatna are Sri Lakshminarasimha, Sri Gangadhreshwara, Sri Jyothirmaheswara and other small temples.

nice info, i was here few days back but unfortunately not able to see the Idol.

I recently visited the historic temple and Lord Sri Ranganatha Swamy and Sri Lakshmi Deveri on 15th March, 2010 with family members.
We spent a nice devotional time and never forget such a nice place

Hi Nistala,
Good to hear that you had a good place in this divine place.
Regards,
Shantha

About the historicity of Srirangapatna,it is the Ganga Dynasty in 9th century which founded this temple,patronised later by Hoysala and Vijayanagar Kingdoms,in that order.May be the later structures were the contribution by the Vijayanagar rulers.

Thank you J.V.V.Murthy for the information.
Regards,
Shantha

The Lord Himself stays here.
Fortunate to have been able to get HIS Darshana.
Must visit for all devotees.

Visited 4 times in last 4 months, but my eagerness to visit again never ends.
I wish Sri Rangnatha swamy call me again to visit.

Hi Kamal,
Wonderful to hear about your visits to this temple and I hope you can visit again.

I totally connect with your sentiments.
Shantha

I am fortunate that I had Thrice or more Swamy darsan. I worship the name every day inmy pooja.
It is great that Swami is worshipped by Ali and others.

Hi Lokanadham,
Good to hear that the lord is in your prayers everyday.
Regards,
Shantha

You are so right Mangala.

Hai. I also had the darshan of the Deity last month

when i attanded a marriage. Really a Holy place and

not crowded like Srirangam at Trichy. Your can have

the Lord’s Darshan without any disturbance.. Now I

am planning to take my wife to the Holy place.

Hi Ganeshan, Thanks for sharing your experience and visiting the website.
Regards,
Shantha