The first time I visited Shravanabelagola was in 1982 on a school trip. It was Mahamasthakabhishekha time and we climbed up the rickety scaffolding up to the head of the monolithic statue of Bahubali along with a swarm of people. It was a scary experience and it was only Lord Bahubali who saved us from falling off! But I am glad to have climbed up as the view from the head of the statue was fabulous and we could touch the curls on the head of the lord! 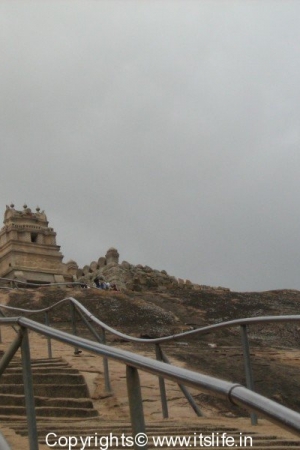 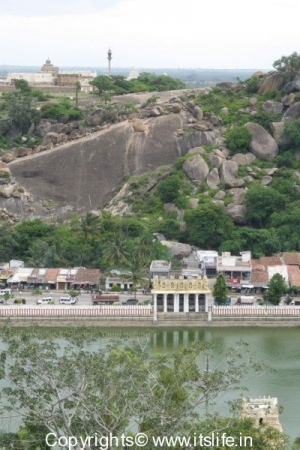 Shravanabelagola is located 13 Kms from Chennarayapatna in Hassan district, Karnataka with 2300 years of Jain heritage. There is a beautiful pond called Belagola meaning White pond. It is an enchanting and spiritual place interspersed with natural beauty. This is a place where tyaga / renunciation and Ahimsa / non violence are a part of everyday life. Shravanabelagola is an abode of kings, monks, tourists, researchers and pilgrims. 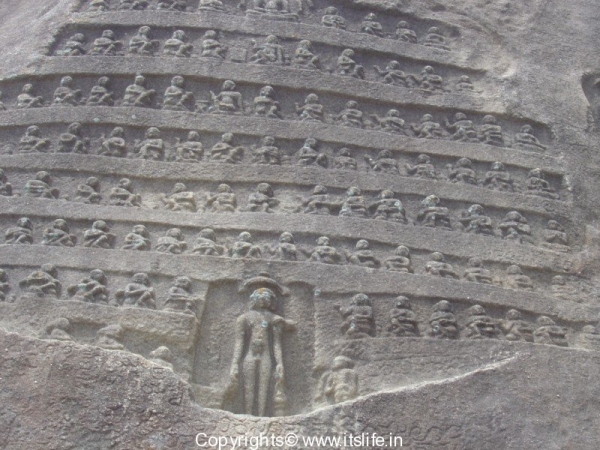 People flock to this place to pay respects to the monolithic statue of Bhagavan Gomateshwara Bahubali. Shravanabelagola is an important Jain pilgrim center. 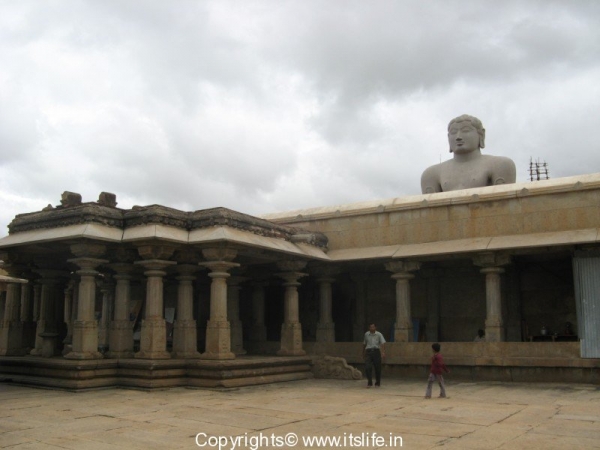 There are two hills here known as Chandragiri (Chikkabetta) and Vindyagiri. 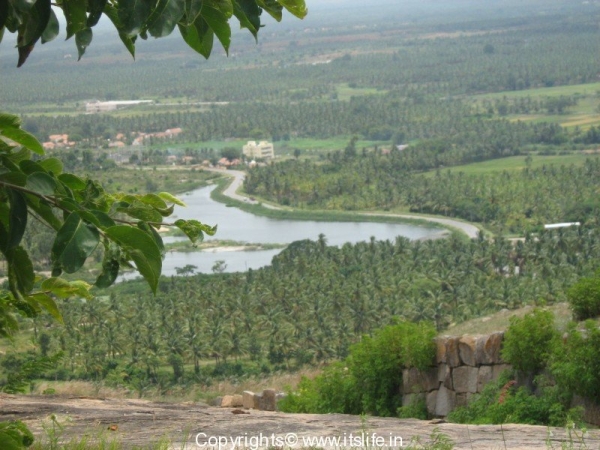 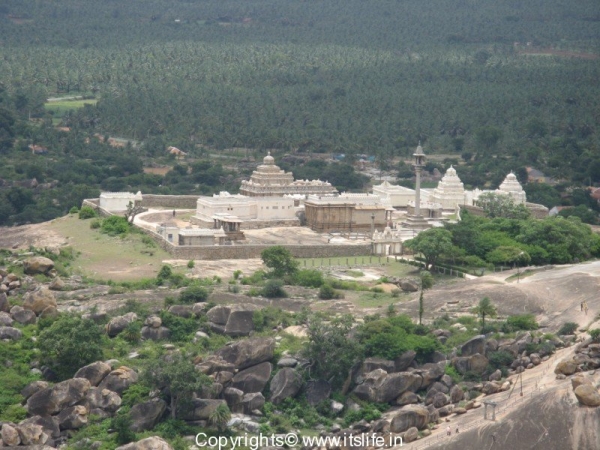 There are steps carved out for an easy ascent. There many other monuments of importance, which are worth a visit.

Vindyagiri
Vindhyagiri hill is a big rock, which is 470 feet high with 500 steps cut in the rock. 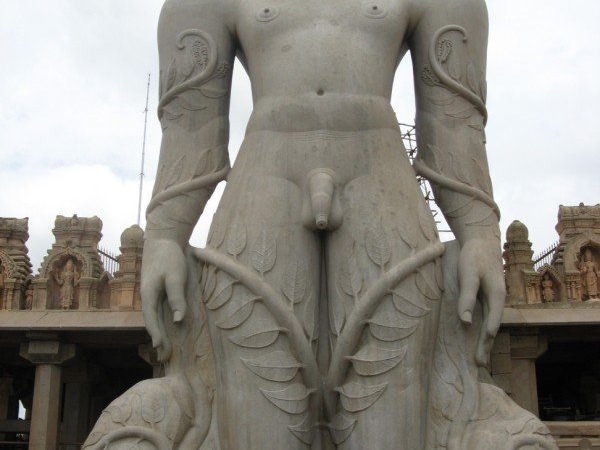 The monolithic statue of Bhagavan Gomateshwara Bahubali is located on this hill. The statue is 57 feet tall and was erected by Chamundaraya, a general of King Gangaraya for his mother in 988 AD. He is a symbol of victory over greed, pride, himsa, and selfishness and is an enlightened divine force of truth. 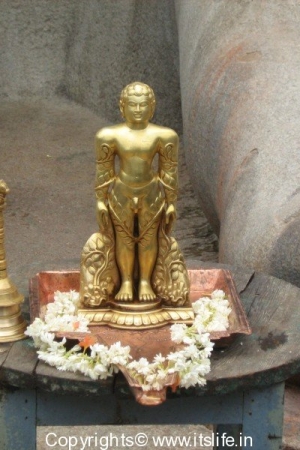 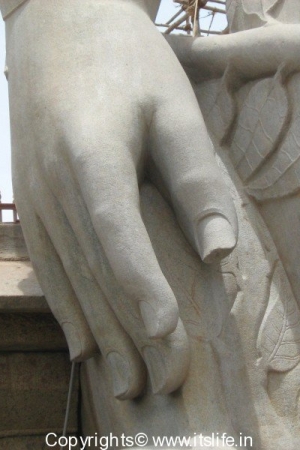 The statue is the biggest in the world and is carved to perfection. After the steep climb, it is peaceful to sit in the courtyard of the Sanctum and meditate. 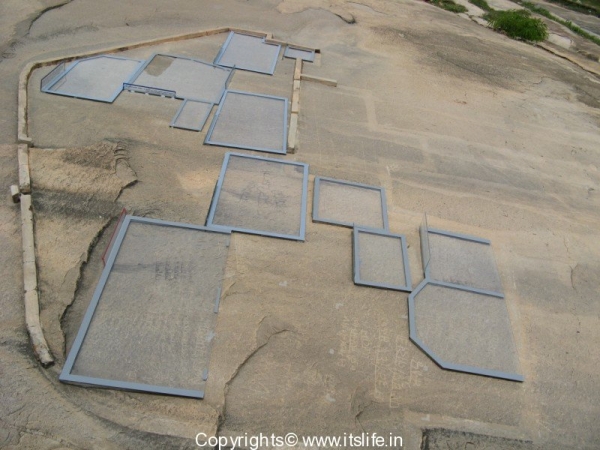 There are old Kannada inscription at the foot of the idol belonging to the western Ganga dynastic in 981 AD. The inscriptions explain the various rulers of the region like Gangas, Rashtrakutas, Hoysalas, the Vijayanagar Empire, and Mysore Wodeyars. 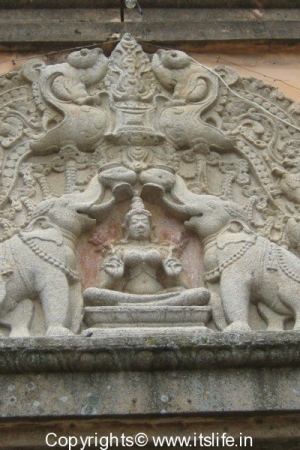 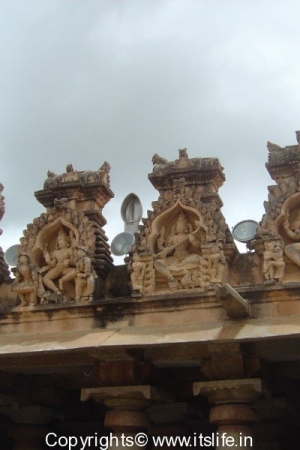 Shravanabelagola is the seat of the ancient Bhattaraka Mutt from the Digambar monstic tradition. The Bhattarakas are all named Charukirti and the guru lives in the Mutt. The Jain matha and mandir / temple are situated at base of Vindhyagiri paravat. 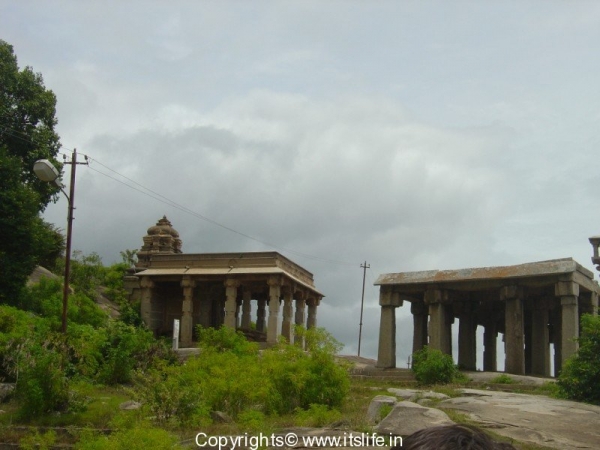 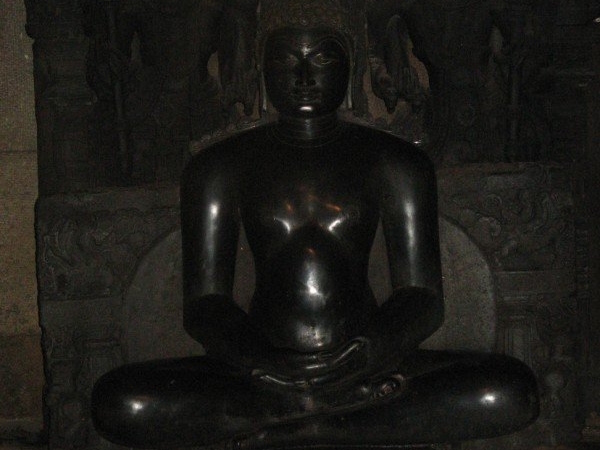 Mahamastakabhishekha
Every twelve years the Mahamastakabhishekha is held for 12 days. Thousands of people congregate here to witness the spectacle. The statue is worshiped according to Jain Agama. 1008 pots filled with sacred water are placed in the front of the statue. The statue is first bathed in milk, curds, ghee, turmeric, kumkum and flowers while the Mantras are chanted. After this, the 1008 pots of water abhishekha take place. Each of the pot are bid by devotees and they have the privilege of pouring the water on the lord. It is a custom that the first to offer is the ruler of Mysore who is held in great regard. 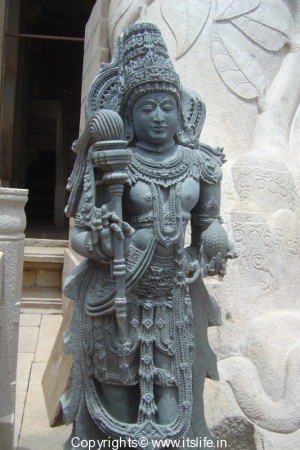 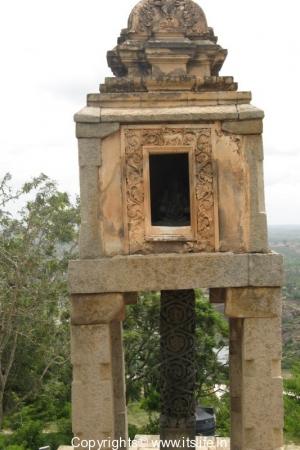 The next Mahamastakabhishekha is due in 2018.