The route of River Cauvery’s journey from her birthplace Talacauvery to Bay of Bengal is dotted with picturesque waterfalls, pilgrimage centers, islands and confluence of rivers. 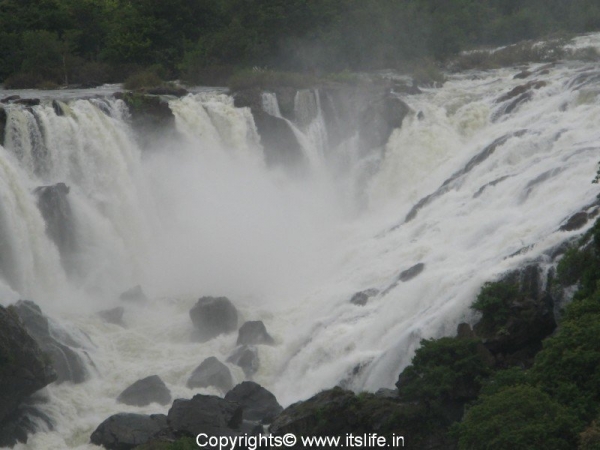 In Shivanasamudra (Sea of Shiva) the river bifurcates into two forming an island and both the branches plummet into rocky gorges to form awesome waterfalls.  The branches of the river meet again and continue their onward journey.  The two waterfalls are Gaganachukki flowing from Mandya district and Bharachukki flowing from Chamarajanagar and together are also known as bluff. 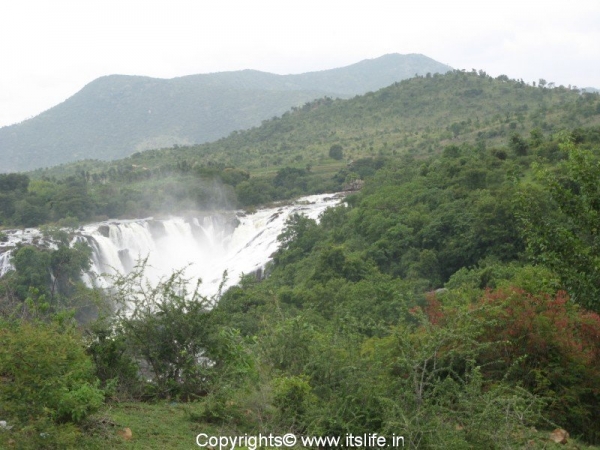 Shivanasamudra is a small island town situated 65 Km from Mysore and 123 Km from Bangalore.  The Mysore Maharajahs established Asia’s first hydroelectric project here in 1902. This island is one of the fourth largest islands formed by river Cauvery. 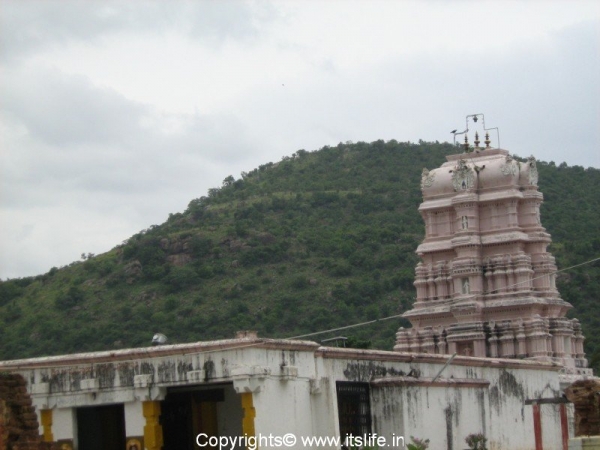 There is a beautiful ancient Dravidian temple on the island dedicated to Lord Ranganatha known as Madhya Ranga, which is a pilgrimage center.  Lord Ranganatha swamy/Vishnu’s idol is in a sleeping pose on Adishesha/the seven-headed serpent.  There are two more Ranganatha temples on banks of river Cauvery, which are Adi Ranga at Srirangapatna and Anthya Ranga at Srirangam, Tamil Nadu. 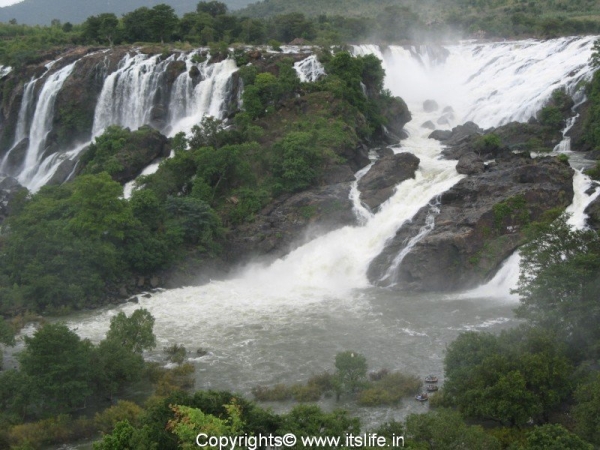 Bharachukki falls is 3 Kms away from Gaganachukki falls.  The segmented falls are listed in the 100 most beautiful waterfalls in the world.  Bharachukki falls from a height of 90 meters but the width of the falls is almost 800 meters.  The greenery surrounding the falls the blue skies and milky white water roaring consistently are sights and sounds not to be forgotten easily. 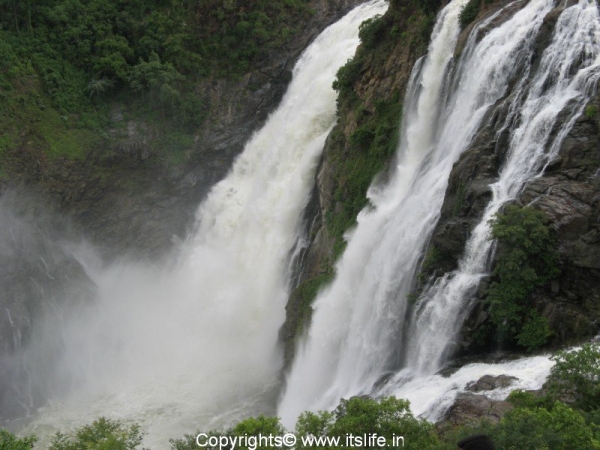 Gaganachukki falls from a height of 100 meters or more and cascades with force and elegance on the rocks resulting in huge sprays of water dashing on the rocks on either side.  The gorge formed by this waterfall at the bottom is in the shape of a horseshoe.  There is a watchtower on the eastern side of the falls and on the western side is the tomb of Muslim saint Phir Ghaib. 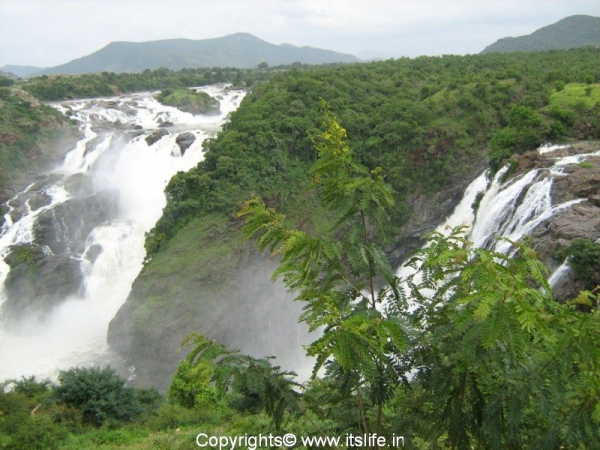 It is no surprise that the waterfalls caught the fancy of the 19th century traveler and then Chief Commissioner of Mysore Lewin Bentham Bowring. 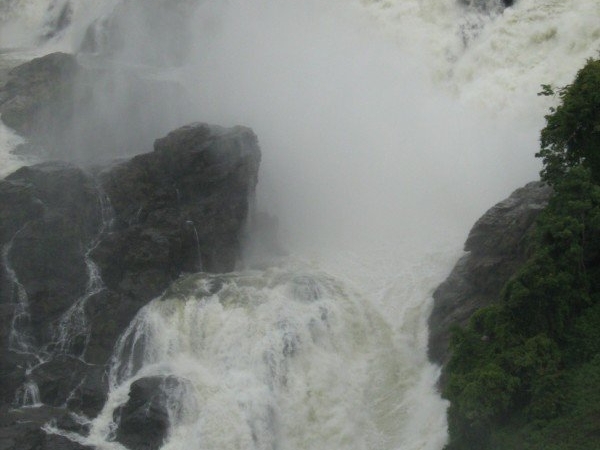 
One rock formation caught my eye (Picture7), which looked exactly like the face of the dog that starred in the 1973 movie “Digby, the biggest dog in the world” and we named the rock “Digby”.

On the way to Shivanasamudra we came across beautiful lakes with Lotus blooms and few Painted Storks wading in water bodies.  The waterfalls true magnificence can be enjoyed during July to September.  A waterfalls festival for two days is celebrated every year during the rainy season (July- August).  The other interesting places nearby are Talakadu with innumerable legends, 30 Km from here and Somnathapura with the beautiful Chennakeshava temple is situated 50 Km from Shivanasamudra. 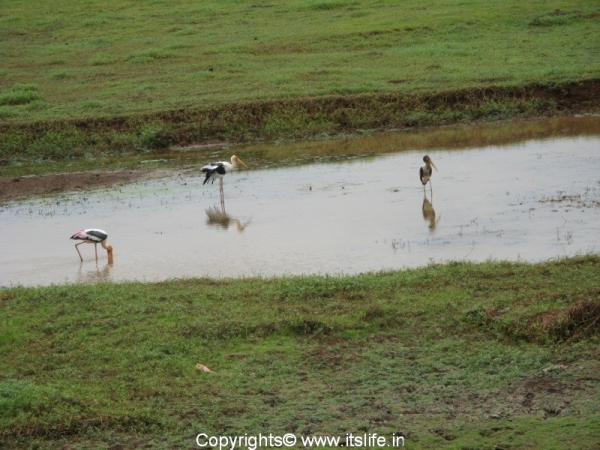 The way you write is very exciting. We feel like visiting this place this monsoon. Thanks for writing and keep up the fantastic work.

i bet u meant tala-cauvery to Bay of Bengal instead of Arabian Sea.

Hi Ashok,
Thanks for pointing out, you won the bet!
Regards,
Shantha

Is this the right time to go?

Hi Suvadeep,
This is not the right time to go, as it is summer and the water flow will be restricted from Kabini dam. Just wait for the rains and visit the place.
Regards,
Shantha

Is this the right time to go there.
I am in B’lore only till July, so shud I visit the falls now, wait for a little more rains as I cannot wait till August, when the falls will be in full bloom.

Hi Shweta,
Wait a while longer and plan your trip sometime in the 3rd week of July…you might be rewarded with a good sight.
Thanks for reading,
Shantha

Breath-taking pics! I am glad I chanced upon this site when I was looking for something else (Karibevinasoppina chutney pudi!). I had lived in Shivasamudram as a little girl more than fifty years ago. Thanks for helping me re-live some old memories.

Hi Shailaja,
Thanks for your comments. It must have been great living in such a beautiful spot! I have visited the falls innumerable times in all seasons but I am still looking forward to visit the place again this August.
Regards,
Shantha

Now, it is the best time to go….the water is overflowing and this will look like niagra falls…make time to visit the same

Thanks Hemanth for the information.

Hey Guys, we are planning to visit this place for the Friendship day this year, ie on 2nd Aug.
Please let me know if we can get down in the water fora small splash. If swimming is allowed we will be the happiest people on Earth.

There are steps that lead to the base of the falls. Locals offer you coracle rides at the base. However it is extremely dangerous to go on these rides. We have heard that many have lost their lives trying to swing in the waters.

Setting all this aside, this is a must see place and August is a good time to be there.

Have fun but do take care of yourselves.

The photographs are excellent. Even i tried visiting the place when i was working in mysore, but could not dare to move ahead after talakad. have you seen the idol of Ranganatha there? Is it similar to the one in Sri rangapatna and Sri rangam of chennai?

Hi Srinivasan,
Yes, I have seen the idol at Madhyaranga. It is very similar to the one in Srirangapattana, but a little smaller. I have not yet been to Srirangam, but I have heard that the idol is similar but extremely huge. Hope you can visit Madhyaranga the next time.
Regards,
Shantha

My parents are comming to bangalore this weekend and want to visit Shivanasamudra , I know its not the right time, but will there be water in the falls, I can;t wait till moonsoons as they will head back in a weeks time … in case u know of a better place for a days visit please advice

Can you let me know other places in & around bangalore or mysore .
Cheers!!!!!

Why is it called bluff ? I have never understood the meaning as applied in this context.

Hi Nagesh,
Good question. As a child I have wondered why the falls is called as bluff!

Hope some reader will throw light on this.
Regards,
Shantha

Just visited the falls the day before, its summer and so not much water, so could bath and swim and also take rides on the coracle. The trip was planned thanks to the net, it would have been a city circle otherwise. Thank youuu

Hi Pradeep,
Yes, in summer it is just a trickle. Good you could bathe and swim as it is impossible to do these activities during monsoon.
Cheers!
Shantha

I am planning to visit the place this weekend, is it good time to visit?

Hi Sarika,
No, this is not a good time to visit. Late July to August end is the best time to visit the falls.
Regards,
Shantha

I have planned to visit shivasamudra with family on 22/23rd of sept. Is it good time? Can I see the falls in full bloom? Kindly reply

Yes Subramanian, Sept is a good time to visit the falls.