While driving to Jaisalmer, our driver Navalji asked us whether we would like to visit Ramdevra temple. We immediately agreed thinking it would be yet another ancient temple dedicated to Rama Devaru / Lord Rama. But we were surprised to find that it is a temple dedicated to a saint called Ramdevra, whom we had never heard of! We are indeed blessed to have visited this place where thousands of people belonging to both Hindu and Muslim faith congregate to pay their respects. 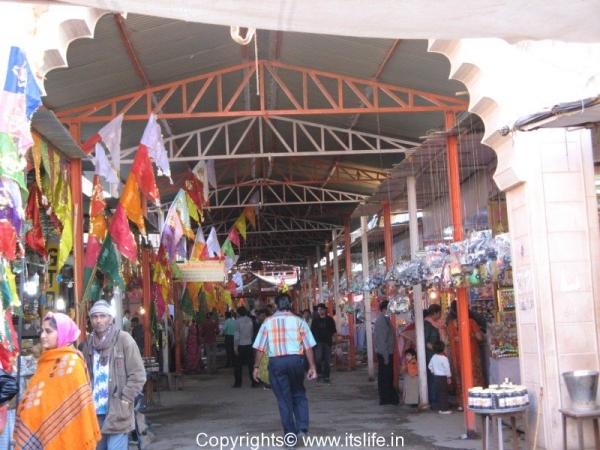 12 Km to the north of Pokhran is a village called Ramdevra in Jaisalmer district of Rajasthan. Baba Ramdevji, a Tanwar Rajput and a saint took Samadhi in 1459 AD, at the age of 33 years in this village. The village is hence named after the baba / saint. A temple was built around the Samadhi by King Ganga Singh of Bikaner in 1931 A.D. 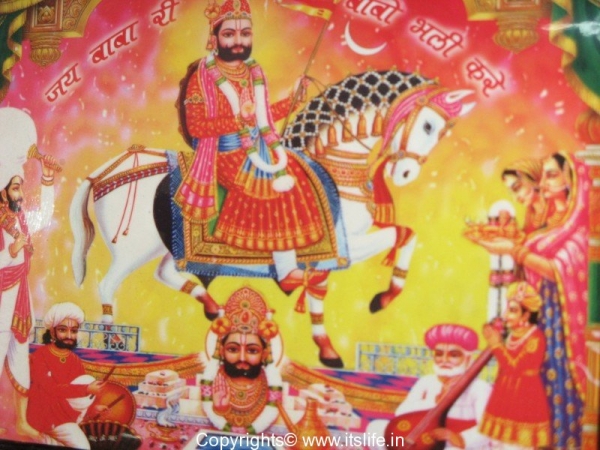 The Hindus consider the baba to be a reincarnation of Lord Krishna. Baba Ramdevji’s powers were heard far and wide and five pirs / Sufi masters from Mecca came to Ramdevra to test the baba. They were convinced beyond their imagination and they paid homage to him. Hence, he is held in high esteem by the Muslims and they call him Ramshahpir or Ramapir. Baba Ramdevji believed in equality of human beings and granted wishes to the poor and down trodden.

A tank known as Ramsar tank is near the village, which is believed to have been constructed by Baba Ramdev. There is also a large step well, the Parcha Baori situated nearby. 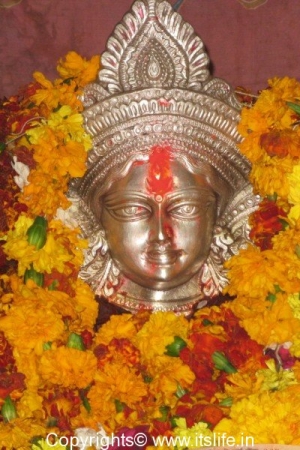 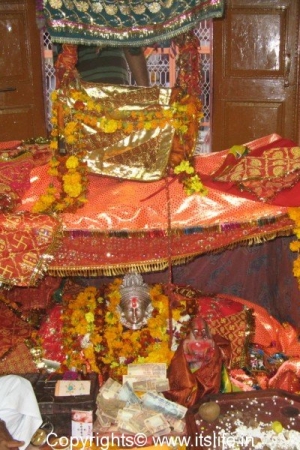 There is a shrine inside the temple dedicated to Daali Bai, a devotee of Baba Ramdev.  There is a bangle structure constructed in concrete known as Daali Bai Ki Kangan / Daali Bai’s Bangle.  It is believed that if you crawl out of the bangle and tie bangles near the shrine your wishes will be fulfilled. 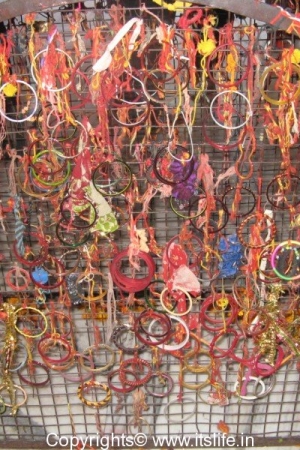 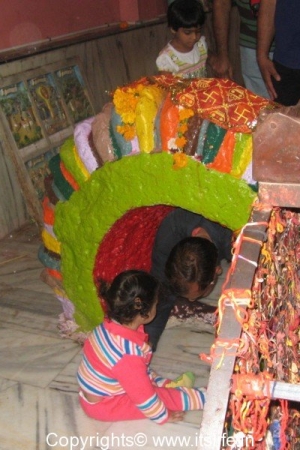 The Ramdevera Fair is held here during August – September, which attracts large number of devotees. Many bhajans and kirtans / devotional songs are sung by devotees to pay homage to the Baba. 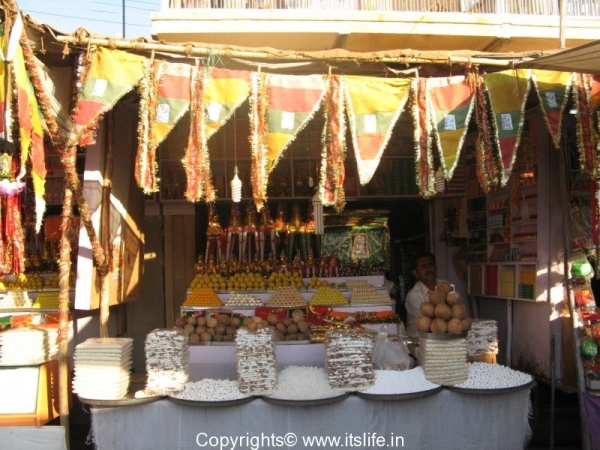 There are many shops lined on either side of the path leading to the Samadhi / Temple selling flowers, coconuts, sugar and decorated toy horses to offer to Ramdevpir. The horse is offered because the baba liked riding horses. 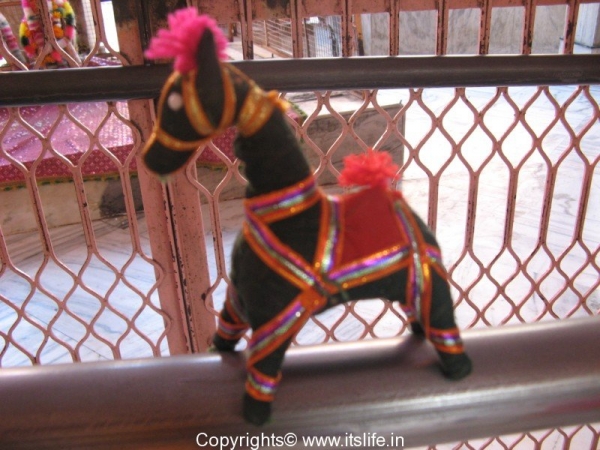 I would love to tour Rajastan, Delhi, Jaipur, Agra and Varanasi. Sounds so interesting. Pics are beautiful, you are lucky.Thanks for posting.

Thank you….I am yet to visit Varanasi…and a lifetime is not enough to explore India

More then 25 yrs myself n my wife belive in shri rampir bapu.after marriage v have visited ramdevra for the darshan/pooja of ramdevpirbapu and our honeymoon. i still fiill he is there by his purcha. V R PLANING TO BUILT TEMPLE OF RAMDEVPIR BAPU ON SAMLL SCALE.WILL U PLEASE GUIDE ME WHAT WILL BE COAST/LEGAL REQUIREMENT/how to start.pl provide me more details.thanks,navin surti

Dear Navin,
It is very nice to know that you are planning to build a temple of Baba Ramdev.

I live in Bangalore and I visited the divine place during our tour to Rajasthan in December last year. I am sorry, I will not be able to answer your queries.

i visitet ramdevra in the yeae 1973 for the first time
when ijoned my first service.
then i visited ramdevra in the year 1978 or 79
. realy it is very holi place where every person
get every thing whatever he think. realy
baba ramdev ji is god in this kayug.
i pray the baba ramdev.
shri ramdevay namah.

baba ramdevji maharaj full fill all wishes
who remember him at any time.
shri ramdevay namha .

very nice place. I visited so many time. ramababari jayyyy. I love this place.

Yes Shushi, it is a nice place.

Nice post. I have not seen my grand mother but she was firm believer of Lord Ramapir. I would visit this temple very soon. Thanks for the info and pics.

Hey Chandan Vyas,
Yes, he seems to be a powerful saint. Do visit and let me know your experience.
Regards,
Shantha

I WANT TO wish I will come hn this holy place

I hope you can visit the place soon Praveen.

Yes it is a pavitra sthan Surana.

I live in Madangir, New Delhi 110062.
and I did visit ramdevra long time a go. I know you all will think I am mad, but I did see lord ramdav. ever since I have been in real hell, very nice place. I love this place visitet ramdevra in the yeae 1970 for the first time.
Realy it is very holi place where every person
get every thing whatever he think. realy
baba ramdev ji is god in this kalyug.
I pray the baba ramdevji.
shri ramdevji namahh.
Regards,

Thank you Rajkumar for sharing your experience and very much connect to your sentiments.
Regards,
Shantha

the name of shri ramapir wife : Netarji and lord &goddess have no case. they are above caste & creed

We visited Ramdevra last year in July…in acute rains from Jaipur….almost everyone in my family wanted to back out…we went via Bikaner….when we reached Dungargarh….my father took the driving seat forcibly…..and immediately after that we were saved by a fatal accident….a headon collision with two trucks on high beam from opposit side….my father couldn’t recognise it….it was around 9pm n then he handed the vehicle back to me….it was none other than Baba Ramdev ji Maharaj who gave his Parcha n saved us….this time again I m going to visit Ramdevra….Baba Bhali Kare….

Hi Sanjay,
Thanks for sharing your experience.
All the best,
Shantha