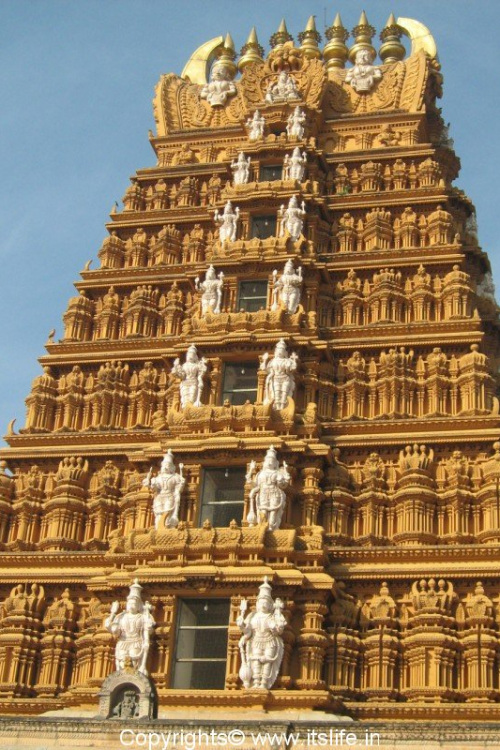 Nanjangud is another way of pronouncing the name of the place and it is also known as Dakshina Kashi.

Srikanteshwara Temple:
The lord here is also referred as Sri Nanjundeshwara, who is the god who drank the poison that was churned in the ocean by the gods and the demons to save mother earth. The poison remained in his throat and thus derived him many names like Nanjundeshwara, Neelakantha and so on.
The temple was built during the Ganga period (325 – 1000 CE) and has gone through renovation by the Hoysala and Wodeyar kings. The gopura / tower was built in 1845 by Krishnaraja Wodeyar III. Srikanteshwara Temple is the largest temple in Karnataka, and the whole compelx is 385 ft. in length and 160 ft. in breadth. 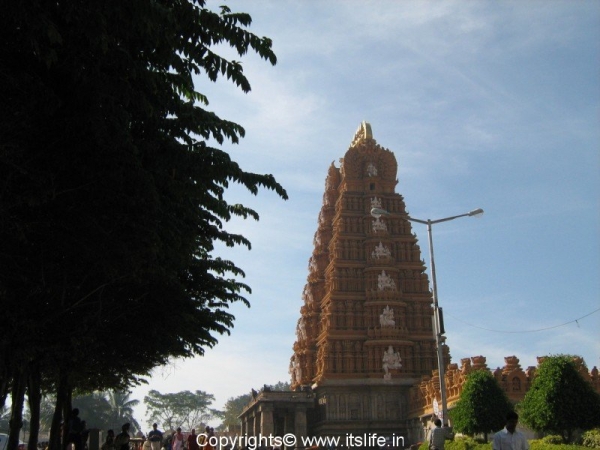 There are 200 big and small shrines inside the temple like the Narayana, Chandikeswara, Parvathi, Natya Ganapathi and others. There are 121 statues of Shiva in different avatars, 65 Lingas, mantapa, vahanas(carriages) and Uthsava Murthis(idols used during procession). There is a pancha mukha (five-faced) Ganapathy, and a huge Nandi (vehicle of Lord Shiva).

Surprisingly Hyder Ali and Tipu Sultan have been associated with this temple and they used to refer the lord as Hakim Nanjunda as Tipu had prayed for the cure of his favorite elephant. When the elephant was cured, Tipu gifted a Linga made of Jade and an emerald necklace. Even today, the lord is believed to cure illness and people offer their gratitude by doing urulu seve / rolling and circumambulating the sanctum sanctorum or offer tula bhara (giving grains, jaggery, rice, and so on equivalent to the weight of the patient). Many pilgrims also offer their hair to the lord, by shaving off their head. 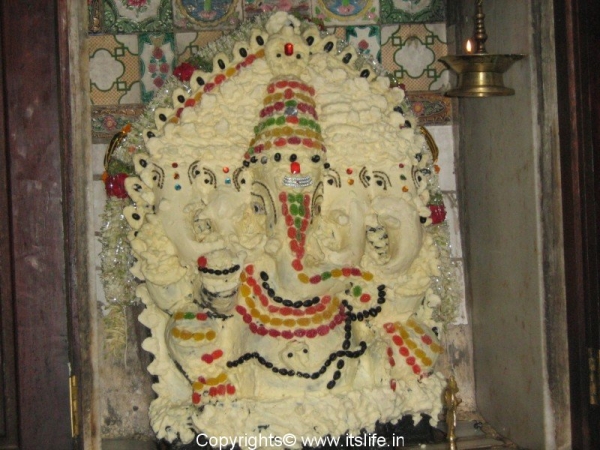 It is believed that Sage Gauthama stayed at this sacred plan and installed the linga here. Lakhs of devotees congregate during the two car / chariot festivals the theppothsava / raft festival every year. 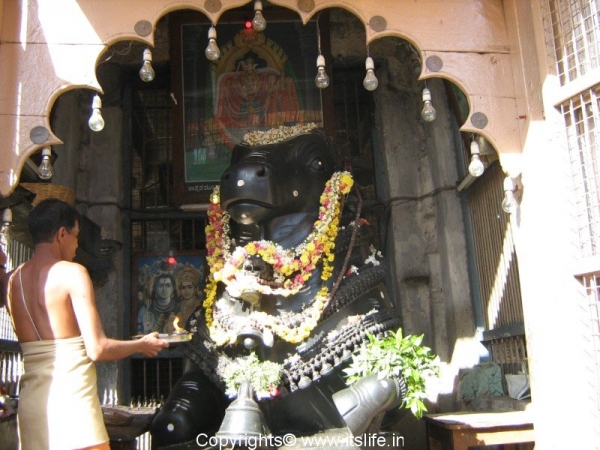 Festivals:
Doddajatre is held during March/April and Chikkajatra is held during November/December.  During these festivals, decorated chariots are pulled through the town. 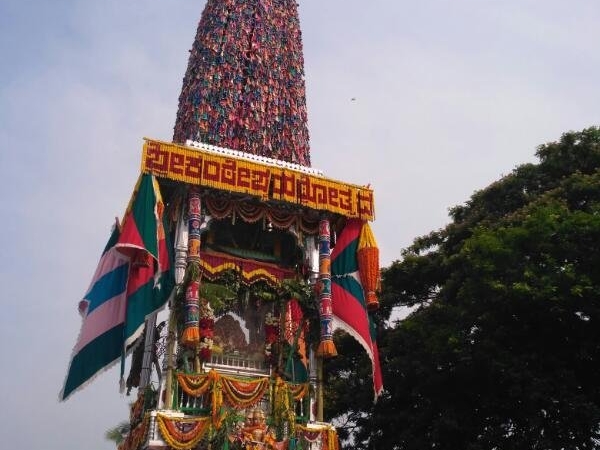 River Kapila / Kabini:
The oldest bridge in India is across River Kapila / Kabini near Sujathapuram. The bridge was built in 1735 and it is now declared as a heritage monument by the government of India. This bridge has both the railway line and a motorable road on the same bridge. 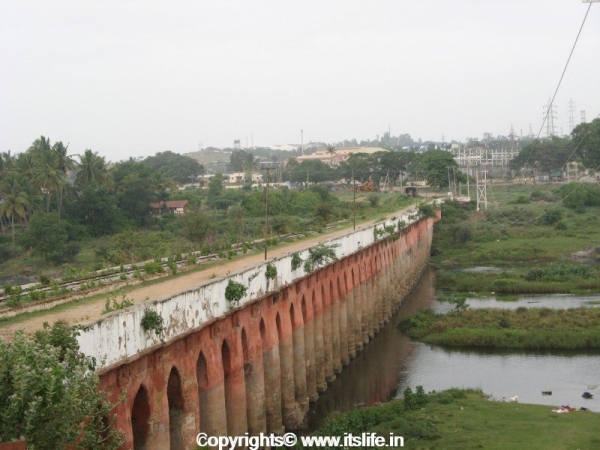 Parashurama Kshetra:
The confluence of River Kapila and Kaundinya is known as Sangam and is also known as Parashurama Kshetra as sage Prashurama is believed to have purified himself from the sin of beheading his mother. There is a Parashurama temple built in the Mysore style, the sanctum has an idol of Lord Parashurama and he is worshiped here. This place has shrines of Maruthi and a newly built Basaveshvara temple. 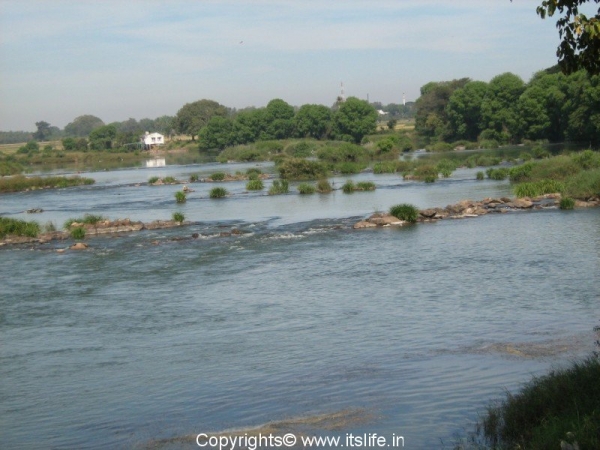 B.V.Pandit Sadvaidyashala:
Late Dr. B.V.Pandit was a successful Ayurveda doctor. He established the Sadvaidyashal, which process Ayurvedic medicines. The most famous product in 1950s and 70s was a tooth powder named “Nanjanagudina Hallupudi”. 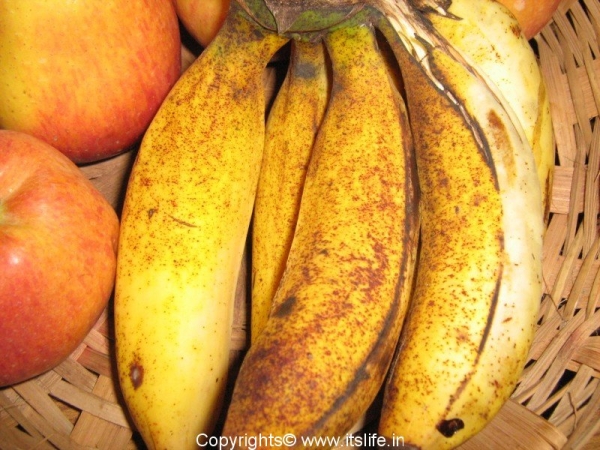 Bananas
Nanjanagudina Rasabaley is a variety of Banana that was grown in this region is very unique in taste. It is the best tasting variety with a pleasant aroma. Sadly, this species is near extinct. I only wish and pray that someone from CFTRI takes up a project to increase the yield of this variety of Banana.

Very nice shots, and write up. makes me want to visit these places 🙂

Yes Raja, it is worth a visit. It is on the way to Ooty from Mysore, so you can have the darshan and proceed from here.