Meenakshi Amman Temple is an ancient and popular temple in Madurai. The sheer size of the temple overwhelms you and the magnificent gopurams (towers) will make you gasp with awe. 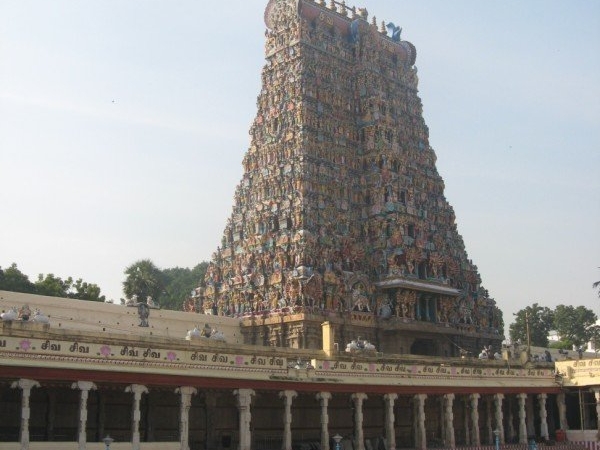 The main deity of the temple is Meenakshi (Parvathi) consort of Lord Shiva. There is another shrine dedicated to Lord Shiva known as Sundareswarar. 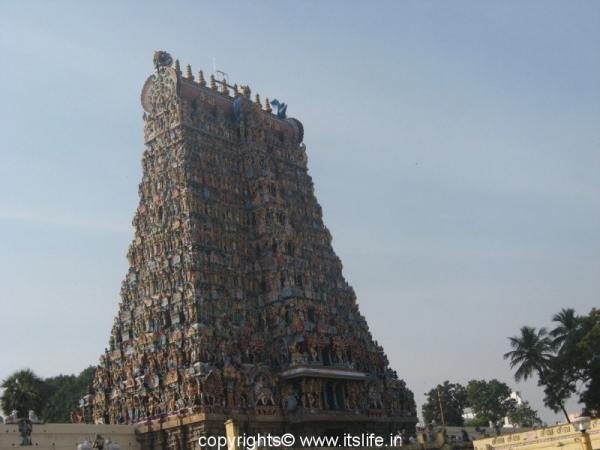 The 2500 year old Madurai city is sprawled around this temple.

Legend:
Goddess Parvati appeared in front of second Pandya king Malayadwaja Pandya and his wife Kanchanamalai from the holy fire while performing the Putra Kameshti Yagna (fire ritual for a heir). Goddess Parvati informed Pandya queen Kanchanamalai would have the privilege of mothering her and the girl baby appeared from the fire with three breasts. The King and Queen were informed that the third breast would disappear when the girl meets her husband. The girl was named Tadaatagai and was given all the relevant training befitting an heir.

Before her coronation, she conquered Sathyaloka (Brahma’s abode), Vaikunta (Vishnu’s abode), and Amaravati (Indra’s abode). Her next target was Kailasha (Shiva’s abode) and when she set her eyes on Shiva, she could not fight and turned coy. Immediately her third breast vanished and she realized that she had met her husband and also that she was the incarnation of goddess Parvathi. Shiva and Taddatagai returned to Madurai for the coronation and marriage ceremony. 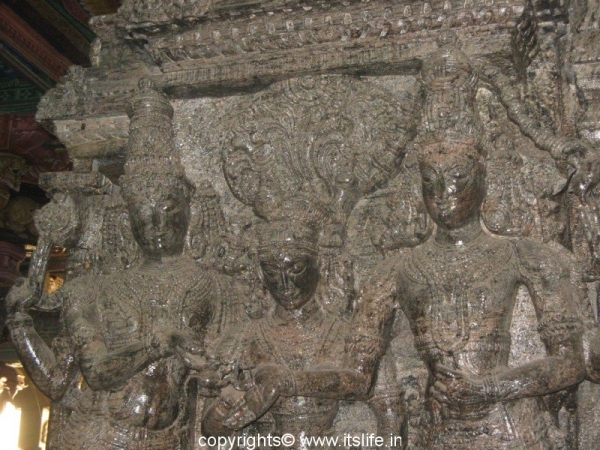 The marriage is celebrated annually as Chithirai Thiruvizha in Madurai.

Architecture:
Though the temple has been mentioned since thousands of years ago, the present structure was built in Tamil style of architecture between 1623 to 1655. 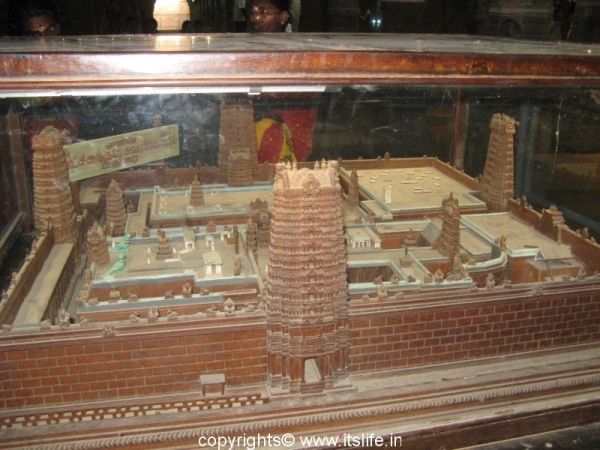 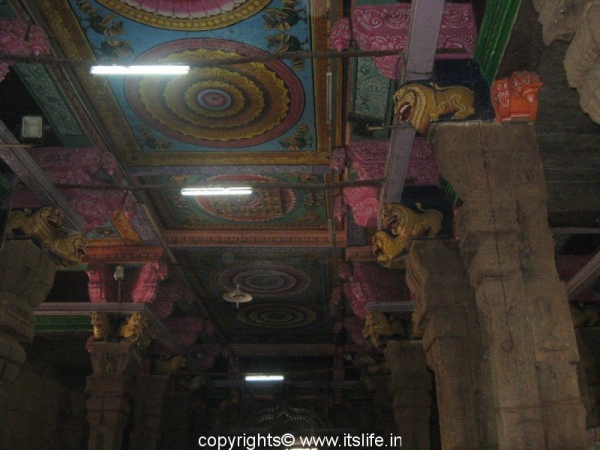 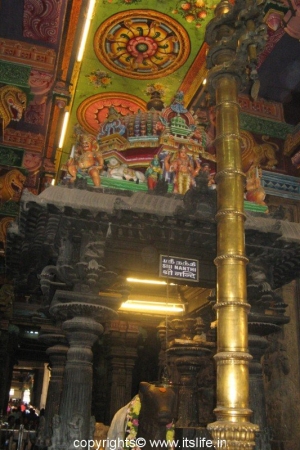 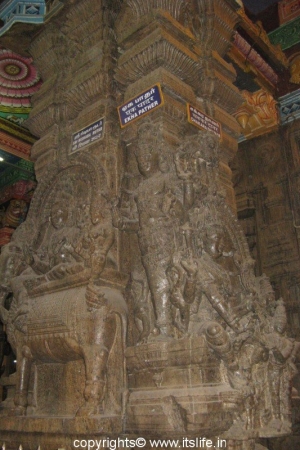 The idol of Meenakshi is in a standing posture with Andal hairstyle and a parrot in her right hand. The parrot is generally associated with the Vaishnava azhwar saint Andal. 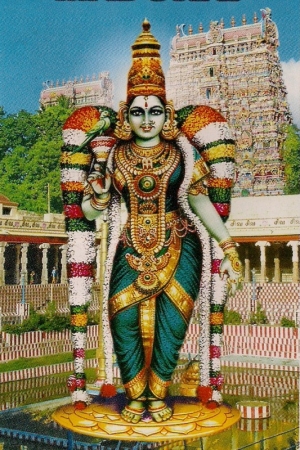 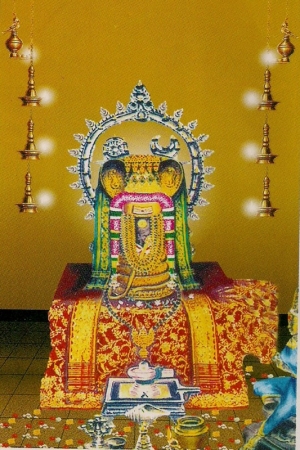 The gopuram built in 1216-1238 is in the east and built by Maravarman Sundara Pandyan. The gopurams are multistoried structures and decorated with thousands of stone figures of animals, gods and demons painted in bright shades. 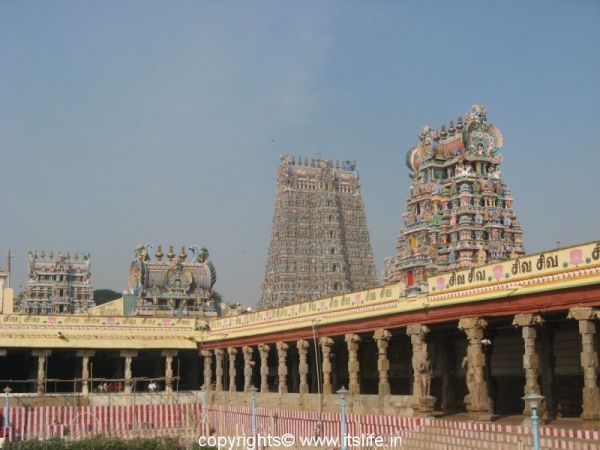 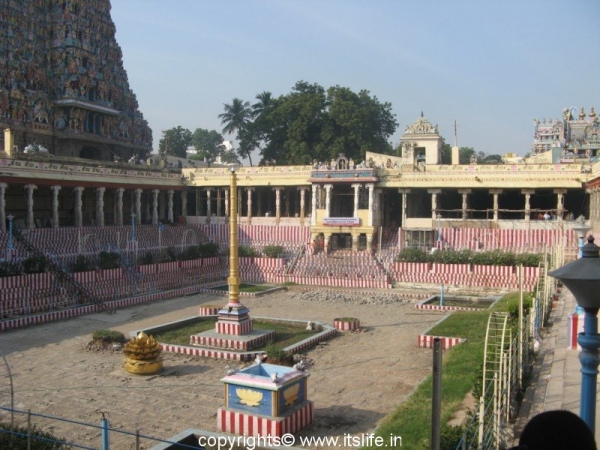 The Kambatadi Mandapam (hall of temple tree) has a seated Nandi (sacred bull and vehicle of Lord Shiva). Pillars surrounding the Nandi is carved with Shiva in various forms. The most famous and much loved is the sculpture depicting the marriage of Meenakshi. 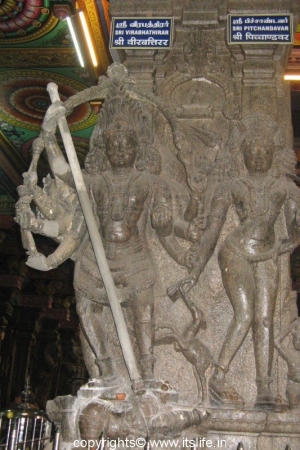 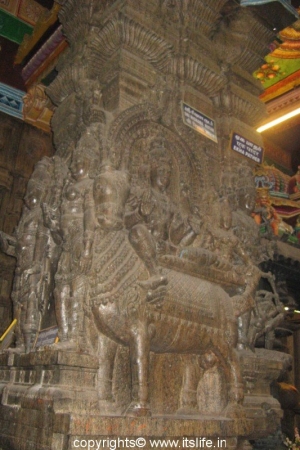 The Puthu Mandapam (new hall) was constructed by Tirumala Nayak and contains large number of sculptures.

The Ashta Shakthi Mandapam (hall of eight goddesses) is the first hall from eastern side of the temple. The hall contains statues of the eight goddesses. 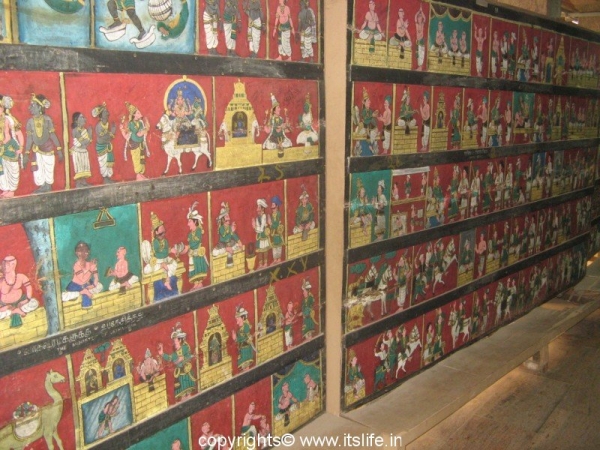 The Viravasantharaya Mandapam is a large hall with huge corridors. The Kalyana mandapam is situated at the south and this is the venue where the marriage of Shiva and Parvati is celebrated every year during the Chithirai Festival in mid-April.

The Mudali Pillai Mandapam or Iruttu Mandapam (dark hall) is built by Muthu Pillai during 1613. It is a wide and long hall. 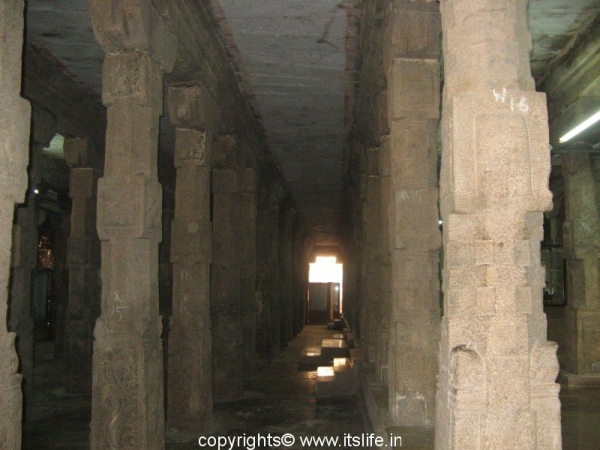 The Meenakshi Nayakkar Mandapam (hall of 1000 pillars) is a mesmerizing hall consisting of 985 carved pillars and is situated to the north of Sundareswarar hall. There are two rows of pillars carved with images of Yali (mythological beast with body of lion and head of an elephant), commonly used as the symbol of Nayak power. 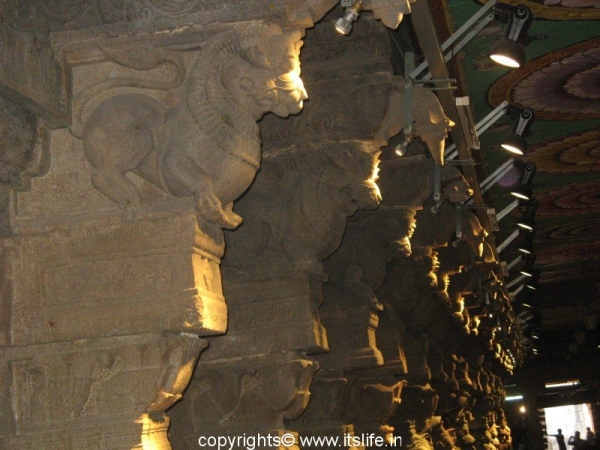 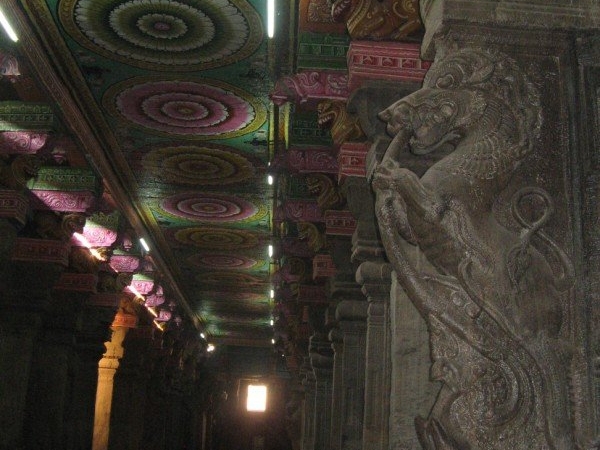 Festivals:
The annual 10-day Meenakshi Tirukalyanam festival, celebrated during April and May and attracts 1 million visitors. 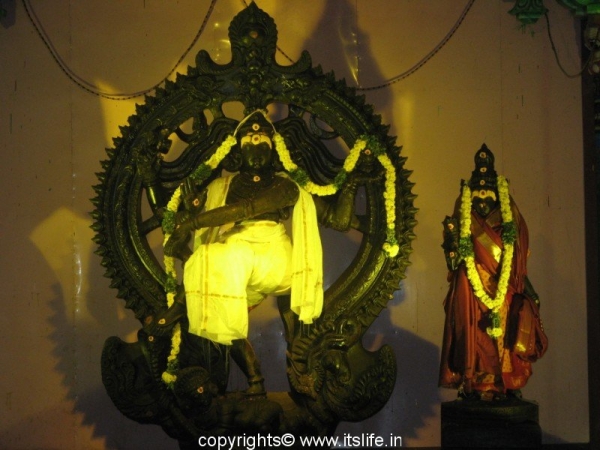 How about some splash of color and healt[...]

Other common names of Dragon fruit are P[...]

Creamy smoothie made from yogurt, dragon[...]

The Maharaja’s Sanskrit school was start[...]

The eighth day of Dasara is celebrated a[...]

Today is Saraswathi Pooja, which is part[...]