I had a strong desire to visit our family deity Sri Ranganatha Swamy also known as Mavinakere Ranga in Mavinakere and I could fulfill this desire last year. I had heard that we have to trek on a rugged path to the temple situated on a rocky hillock. We were pleasantly surprised to find a road built and 660 well laid out steps to the temple. Thanks to the trustees and the local politicians for this useful initiave. 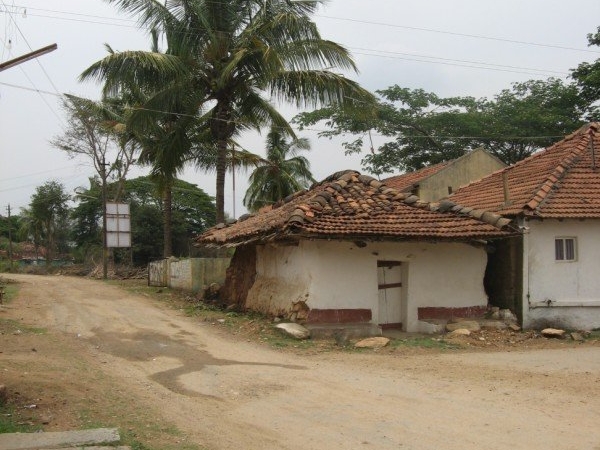 Mavinakere village is located near Holenarasipura, Hassan District. Mavinkere, was the residence of Palegar Lakshmana Nayaka and a ruined fort belonging to the Palegar is situated here. 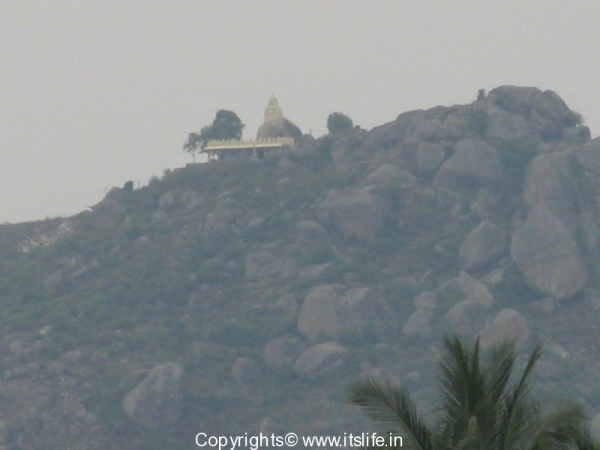 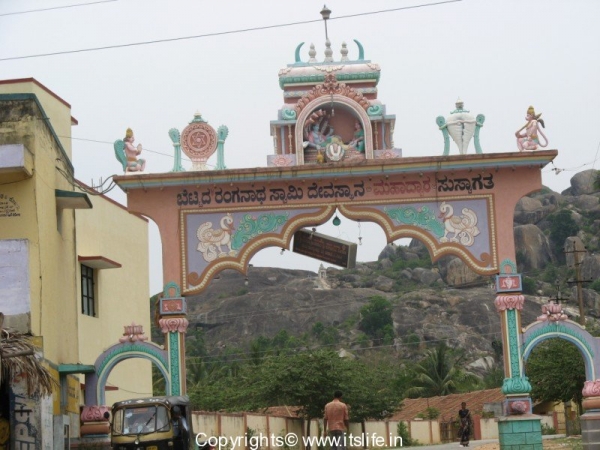 Mavinakere Sri Lakshmi Venkataramanaswamy temple
While driving from Hassan, take a right on the highway near Mavinakere and drive for 1.5 Km  to reach Sri Lakshmi Venkataramanaswamy temple. There is a board with this information.  It is situated a few meters away from Hemavathi river. The idol is about 3 feet high and very divine. The idol is in the form of Chathurbhuja (4 hands) with the right lower hand holding a lotus with a stalk. 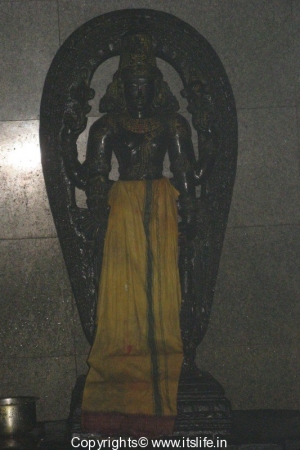 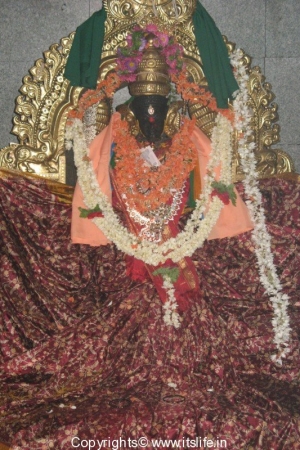 Goddess Padmavathi is installed in a separate shrine inside the temple. 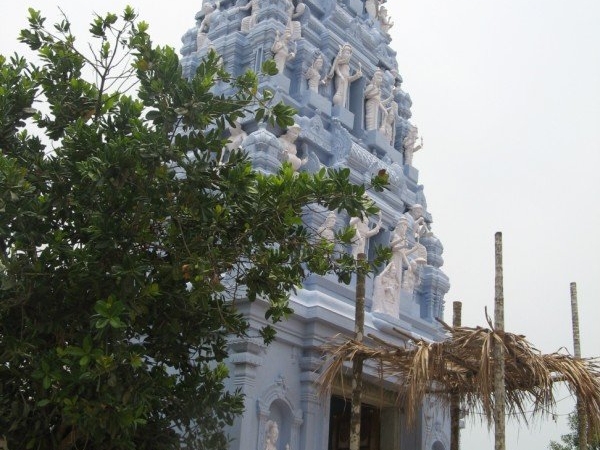 The gopuram / tower of the temple was newly built and the Khumbabhishekha was performed on 22nd Jan 2010 on a grand scale.  A single branch of a very old tree is surviving in this temple with the courtyard wall as a support. 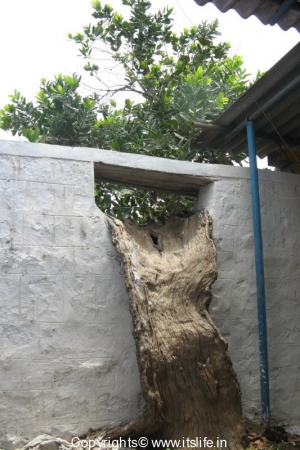 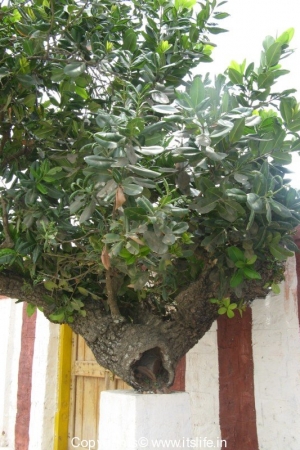 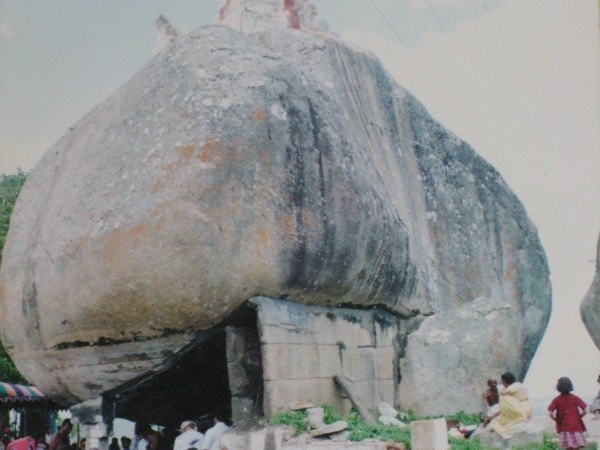 When Palegara Sri Lakshminarasimha Nayaka ruled this region, he noticed that one of his cows was emptying its milk on top of the Mavinakerebetta / hill. Out of curiosity, he followed the cow and indeed it was emptying on a stone in the cave. From that day onwards, the stone is worshiped as Lord Ranganatha, though at that time there was dispute that the stone was Shiva linga. The inscriptions call the deity as Thiruvengalanatha, who is none other than Lord Srinivasa / Balaji. It does not matter whether it is Lord Ranganatha or Srinivasa both are none other than the protector Lord Vishnu. 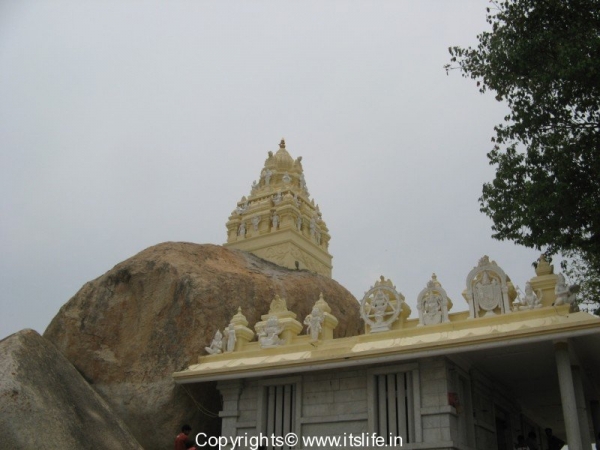 To this day, the offerings are offered right on top of the god. There is a 3 feet standing idol of the lord behind the Ranganatha stone.
On the other side of the cave is a Hanuman sculpted on a rock. The view from the hills is spectacular with cultivated lands and roads criss crossing them. Hemavathi River flows on one side and you can see the Gopuram / tower of Sri Lakshmi Venkataramanaswamy temple. 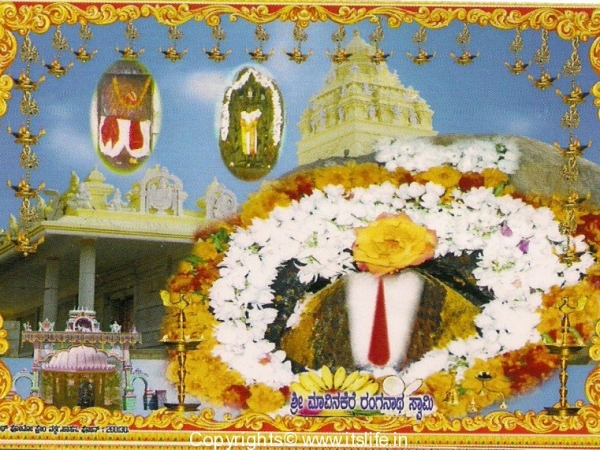 A cave at the foothill is two feet high stone and a rare phenomenon occurs here. Minute particles fall in the form of concentric circles around the bottom. Folk lore says that these particles have medicinal properties though nothing is proved yet. 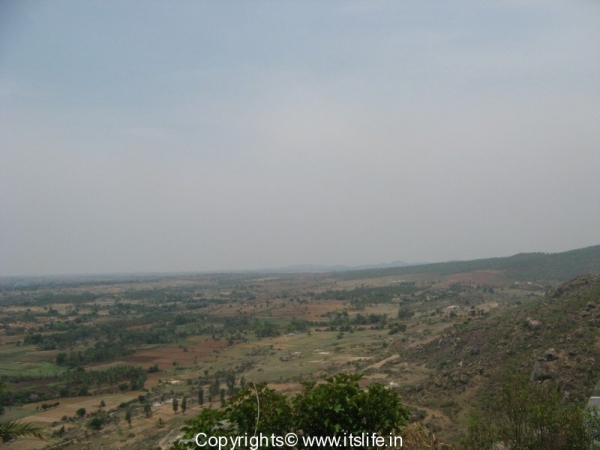 Every year Hanuma Jayanthi and Vaikunta Ekadashi festivals are celebrated on a grand scale.

We spotted few birds and they posed very well for us to take pictures. 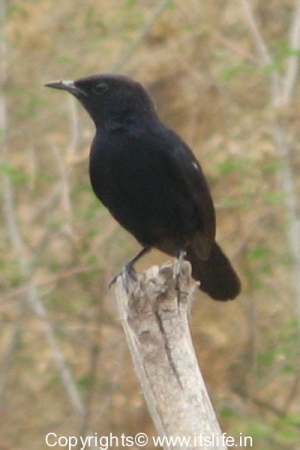 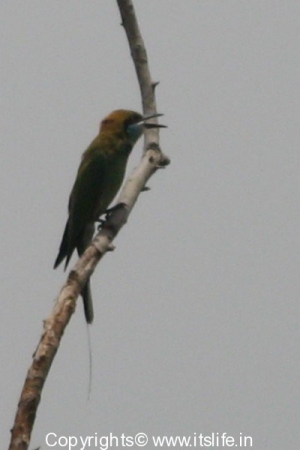 We visited Hemavathy river flowing in Mavinakere and it was a beautiful sight.  Please do not swim in the river it is very dangerous. 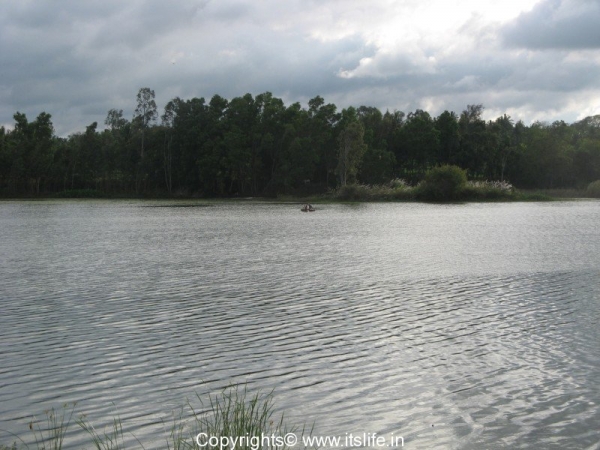 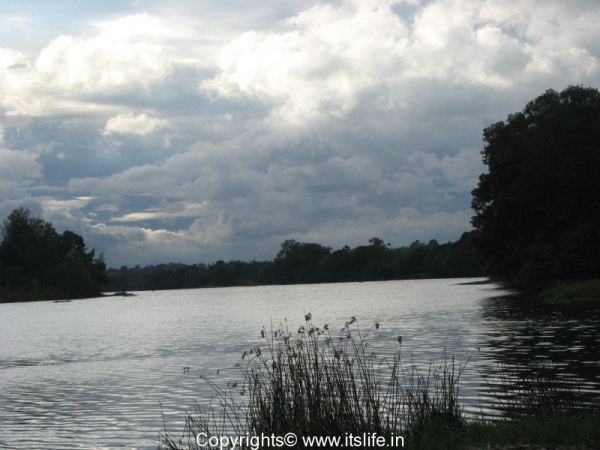 Namaskar
Returned to Chennai —and
Delighted to read on Mavinakere -temple, its background; also to see the photos of Sthala Vriksha surviving –

My Late Teacher Sri Nagesh Mavinkurve -was from this are a the surname is simlar, though he used to speak of Chitaldrug– Mysore, Karnataka area –
Glad to read in your blog posts
Kind Rgds
TR

Namaskar Sir,
Thank you for this note.

Yes it is a beautiful place and hope you can make a visit to this place.
Regards,
Shantha

Dear Shantha, Went thru your writing on Mavinakere Temples. Thank you very much. I should congratulate you for the excellent write-up with some great photographs. Very very informative. In fact our family diety is Mavinakere Sri Lakshmi Venkataramanaswamy. Not too many details and good photographs are available of the Temple and Diety in any site. But your precise narration is very good. Thank you once again.
Kind regards, Venkat Sundaresh, JP Nagar, Bangalore

I am glad that you found this information useful.

Dear Shantha
Excellent article on Mavinakere, very informative. I am planning to go there from Mysore where I live. Not able to get a direction on Google Map. It looks like we have to go to Holenarasipura and ask for directions. I would like to write the directions this time after I return and put it on Facebook
Thank you so much
Saraswathi

Thank you Saraswathi. Hope you have a good trip.
Regards,
Shantha

Dear Shantha I am from Mysore I promised to write the directions to the Mavinakere Temple from there. Here it is After Holenarasipura continue on the Mysore Hassan Road till you reach a village Kamasamudra and next soon after is an another village Halekote. This is at Holekote you will see on your right an Arch entrance to the Hill Top God Lord Bettada Shri Ranganatha Temple and exactly opposite is a Bill board facing the other way if you are coming from Holenarasipura can be missed easily is for Mavinakere Sri Lakshmi Venkataramanaswamy.. They are all written in Kannada… Read more »

Dear Shantha I am from Mysore I promised to write the directions to the Mavinakere Temple from there. Here it is After Holenarasipura continue on the Mysore Hassan Road till you reach a village Kamasamudra and next soon after is an another village Halekote. This is at Halekote you will see on your right an Arch entrance to the Hill Top God Lord Bettada Shri Ranganatha Temple and exactly opposite is a Bill board facing the other way if you are coming from Holenarasipura can be missed easily is for Mavinakere Sri Lakshmi Venkataramanaswamy.. They are all written in Kannada… Read more »

Thanks a lot Saraswathi for the valuable information.
Regards,
Shantha

you can see a temple of Shri Markandeshwara which is old and beautiful here you can see those beautiful sculptures very close.
I think people always preffer and go with show businesses and they often fail to figure out the real beauty.

DONT MIS TO VISIT THAT POOR AND BEAUTIFUL TEMPLE NEXT TIME !

Thanks for the information Nagaraja. I will surely try and visit the temple.

Dear Mrs Shantha,
I am the founder trustee, I went through your publication. It is very nicely drafted. I would like to meet you some time to exchange thoughts.
Presently I am in Us. You can reach me by mail. I will contact you once I reach Bangalore some time in. Over 2012
with warm regards,
Kumar.K.R

Sir, please let me know the names of trustees managing the temple and their address.Ranganath Rao

Hi Ranganath,
I do not have information regarding the trustees. Sorry!
Shantha

madam,
I visited this temple a week back with my family
and enjoyed the place. There are many problems for the
devotees to stay, drinking water,wash rooms are not mantained properly. In the guest house more than 8 people
were playing cards.One should look to this and to do the needful.
with regards

Hi Guruduth,
Yes, I do understand the problems that are present at this remote temple. Hope the environs improve.
Regards,
Shantha

Hi Madam,
Actually mavinakere bettada ranganatha is our family god(mane devaru). Earlier we used to go once in a year for Rathotsava. After my marriage, i am not getting any chance to visit this holy place. Today, i was just searching something i found this pictures. This remembers me my old days.
Thanks, for such a wonderful information.

Hi Deepa,
Hope you get a chance to visit the place soon. This time we visited the Hole / River too. I have updated the post with some pictures of the River.
Regards,
Shantha

I’m sridhar.i have stay in Bangalore
Shall you tell bus timing and rote

Please check in the bus stands.

When is the annual jatre? Which maasa n tithi?

Anyone please send 11th hd image to my mail ID karthiks12044@gmail.com
I need to frame it to my new house

Sent the picture to your email id.

Awesome article madam Shantha. I would like to donate a large amount to this temple. I want to donate it to the administrator of the temple. Where can I get d details of the administrator please? If u can help me on this I will be grateful. Thanks and regards.
HK Sathyan