Mallur also known, as Doddamallur is famous for its ancient Sri Aprameya (Vishnu), Sri Rama and Mallur Krishna Temple (Ambegalu Navneetha (crawling Krishna)) temples built and expanded by the Chola king Rajendra Simha. It is a village on the banks of river Kanva in Channapatna taluk, Bangalore rural district. Mallur is 60 Kms from Bangalore and 3 Kms from Channapatna. The temple is conveniently situated beside the Bangalore-Mysore highway. 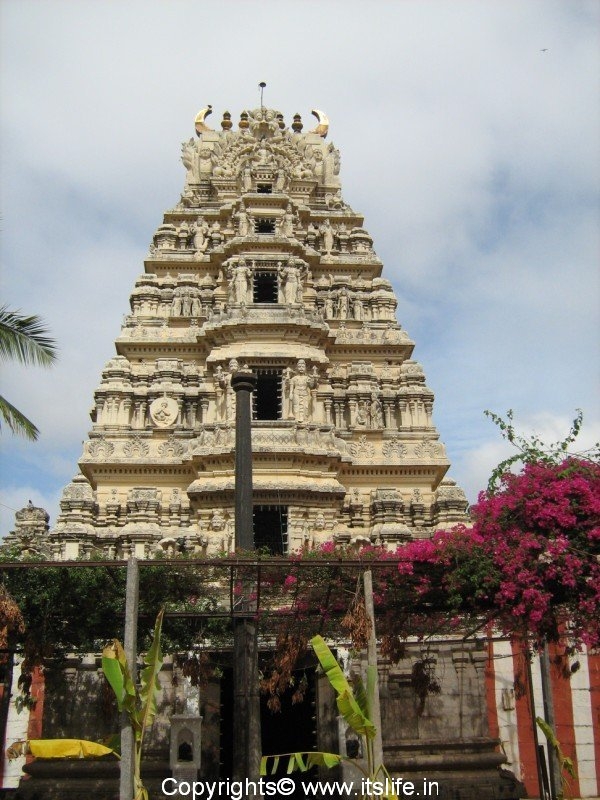 The utsava murthy (a small replica of the main idol for taking on a procession in a chariot) is placed in the sandalwood Shukanasika Mantapa (pedestal). The idol of lord Aprameya is beautifully bedecked with jewelry. Sridevi and Bhoodevi idols accompany the lord along with the idol of saint Ramanujacharya. 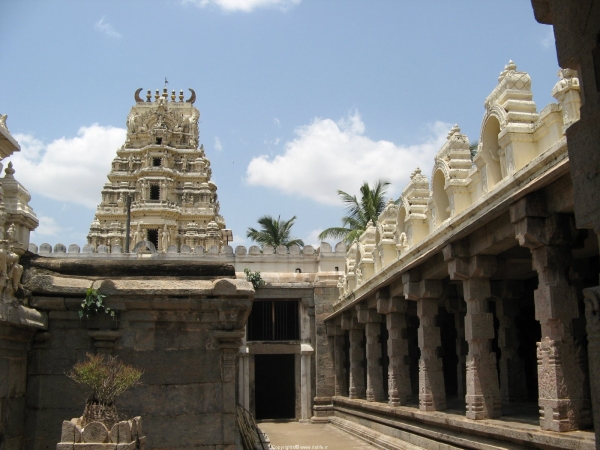 The legend says that Lord Rama stayed in this place and worshipped Lord Aprameya and hence the lord is also known as Sri Ramaprameya. Lord Rama also performed yagnas and homas (elaborate rituals invoking gods through fire) in Mallur and to stand testimony to these events are remnants of the structures where he conducted the yagnas and homas.

The presiding goddess of this place is Aravindavalli. The beautiful idol is placed in a separate enclosure and the divine vibrations felt while watching her glowing face is as though she is blessing you with all her energy. 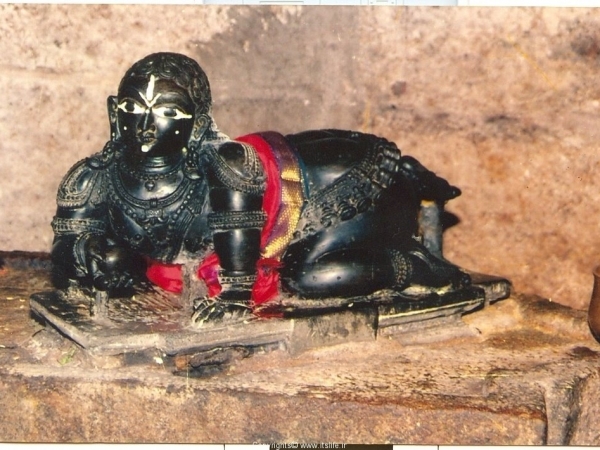 The crawling Krishna idol is adorable with beautiful eyes and butter in his hands. The sight of this idol kindles the maternal instinct in every devotee. Another belief is that barren women are blessed with children if they pray to this Krishna. After they are blessed they come and thank the lord by gifting small cradles to the temple. These can be seen tied to the ceiling above the Krishna idol.

There is also historical evidence that vishishta advaitha saint Sri Ramanujacharya worshipped the lord in the temple during his piligrimage to Karnataka and that the famous composer Sri Purandaradasa was so inspired and ecstatic by seeing Ambegalu Krishna, that he penned the famous song “Jagadoddharana Adisidalu Yashoda”. To commemorate him and his kriti/lyrics there is a Purandaradasa Mantapam facing the Rajagopuram. 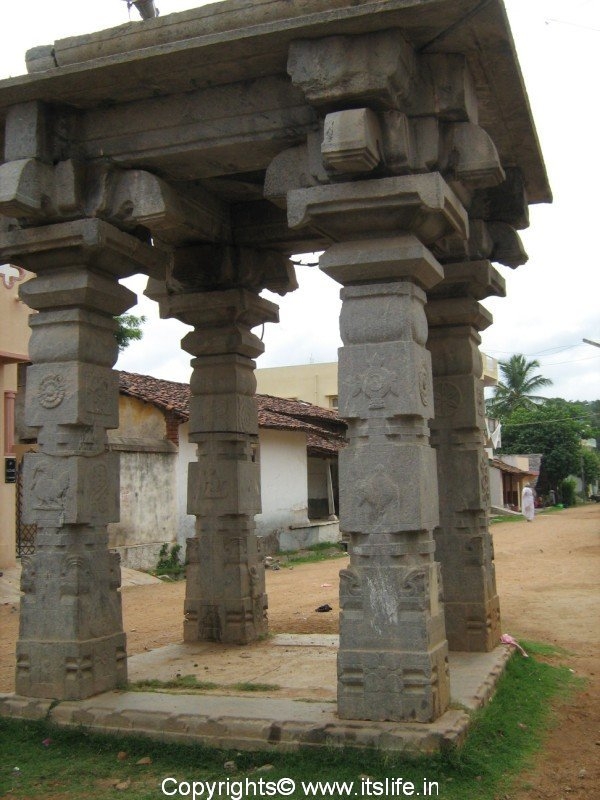 Brahmotsava the annual festival is celebrated in the months of April/May. Surprisingly this huge temple is built on sand and does not have any solid foundation. The temple architecture is built in such a way that the sunrays at sunrise fall directly on the grabhagudi (sanctum sanctorum) of lord Ramaapremeya during April/May.

Prasada / blessed food  is served as lunch on weekends and public holidays in the temple premises.

You can also visit Kokkrebellur, which is 20 Kms away from this place.

Dear Sir/Madam, After waitng for so many years I visited Malur on 28-10-09 even though i had been to Mysore so many times I was not able to visit this ancient temple. I was very much particular to visit this temple as I am staunch beliver in Great dasaru- Sri Purandara dasaru and his Great Devaranamas. It is understood that Sri Purandara dasaru created his famous devaranama-Jagadoddarana here. I was very much impressed by seeing Apremeya Swamy and Ambegalu Krishna. I have some comments on the maintenance of this great temple.The Govt, Mujarai dept and the temple trust have not… Read more »

Dear Vasudeva, It is unfortunate that you had an unpleasant experience during your visit. But I have had a great experience whenever I have visited the temple. The temple has been spotlessly clean and each and every devotee were patiently asked to give details for the Archane. As I was interested to know about the temple, the priest narrated the whole story with patience. We were also pleasantly surprised when they asked us to take part in theertha prasada / blessed food and the food comprised of generous helping of Kadamba, Puliyogare, Shakkare Pongal and Mosaranna. My mother who cannot… Read more »

Respected Sir/Madam,
Kindly forward the histroy of this temple at Mallur in Chanapatana as i am interested to know about the temple as i am intending to visit the temple with the name of the contact person and fone numbers.
Khalyas

Hi Khalyas,
I have posted everything I know with phone numbers. Please read the article carefully once again.
Regards,
Shantha

Only childless couples offer their prayers here or can couples wishing for particularly boy/girl can also pray? I know a couple from u.s.who need this info. Do they need to visit this temple first ?

I am not sure Shivan. But definitely there is no harm in praying from wherever they are. They can visit the temple once their wish is fulfilled.
All the best to the couple,
Shantha

Hi, I had visited this temple last year (when my wife was pregnant) and we are blessed now with a cute baby boy (Balakrishna :)). We had prayed GOD during our visit last year to have ‘Thulabaara’ of our kid. We would like to visit temple next week (on 6th Nov) to fulfil it. I’d like to know any contact details of any person to know the pre-requisites for Thulabaara in Aprameya Ambegalu Krishna temple. I read through your article and the contact details – Sri. E. Venugopal President Phone: 080-7200015 Mob: 9448077348 Would Mr. Venugopal help me out with… Read more »

Hi Darshan,
Congratulations on becoming the proud parent of Balakrishna. Wish him the best in life.

Please do call Sri Venugopal, he will definitely guide you.
Regards,
Shantha

Hi Ashwin,
Main deity is Aprameya / Vishnu. I am not aware of the deity name that you have mentioned. Are you inquiring about Lord Ranganatha, who is the presiding deity of Srirangapatna, Madhya Ranga and Srirangam?

Sir Venugopal today morning i was seeing T.V and i came to know about this temple. I am interested to Visit this temple and Ambegalu Krishna at the earliest. Before that can you please let me know whether we can pray only for kids or any health issues and others also…

I had married in the year 2007 and got miscarriage on July 2009. After watching TV 9 i had visited this temple in September 2009 and prayed Ambegalu Krishna. Till today i have not conceived. What to do? please help me.

Hi Chaya and Mamata,
Happy to hear that you visited the temple.

I write about the legends and stories associated with places and do not give advise on any other matter.

I wish you the best and hope all your wishes come true.
Regards,
Shantha

Hi Shantha. I just went through your website and found it interesting… Shantha i am married since 3 years i am planning for a baby now and hence i had been to Ambegalu Krishna Temple in Mallur also. I am actually planning for a baby boy… Can you tell me how it can be done… Either medically or by doing any poojas or chanting any mantras…. Please brief me in detail to my mail id provided above..

Hi Chaya,
I have already replied to your query.
All the best,
Shantha

I am from Kangayam , tamilnadu during the year January’ 2009 i am visit to this temple / when that time my wife was preganent. In june ‘ 2009 baby boy was born / I am so happy So, this temple definitely will get ( after Navaneetha Krishnan Darishanam ) child

Hi Prakash,
Congratulations on being a proud father of 3+ year son and thanks for sharing your experience.
Regards,
Shantha

Helow Shantha, i saw all the details of ambegalu krishna temple,realy i am so happy last week only we visited this temple and prayed one baby i am married since 3 years i know defnitly we will get baby and i lots of believed ambegalu krishna.

Hi Anitha,
Have faith, you will definitely be a mother soon.
All the best,
Shantha

Hi Yuvaraj,
Please call the temple and find out the address and if possible share it here for the benefit of readers.
Regards,
Shantha

Hi Kish,
Thanks for sharing your sentiments.
All the best and may god give you happiness.
Regards,
Shantha

I visited temple and kept Idol at home and performing Pooja to idol. Not yet concieved. Am worried will I die childless.

Hi Nandu, I can understand your anguish. Please have trust and accept whatever god decides for you. Be happy always.