The above lyrics are from a song sung in praise of Lord Mylar / Shiva.  Click here for the complete lyrics. 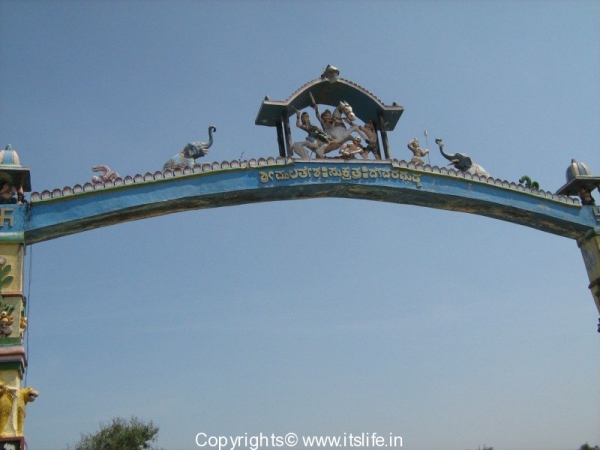 The temple is dedicated to Mailara Lingeshwara and is situated in Rannebennur taluk, Haveri district. Lord Shiva took the form of Mailara to slay the demon brothers, Mallasura and Manikasura. According to legend 7 Crore goravas helped Mylara to slay the asuras / demons. Many families have this form of Shiva as their family deity. 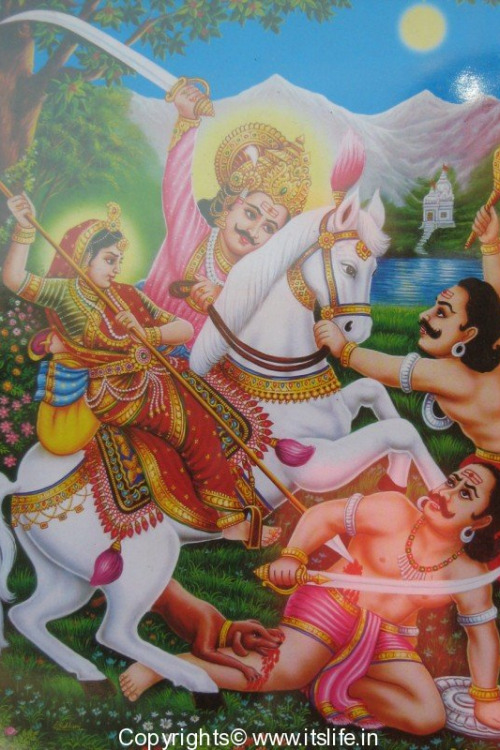 My maternal grandparent’s family deity is Lord Mailara. Another name for Mylara is Marthanda Bhairava, in Maharashtra he is known as Khandoba and in Andhra Pradesh as Mallanna.  In the Mysore region, Mailaralinga is worshipped by Hanumantha Kurubas as Mudukutore Mallikarjuna. 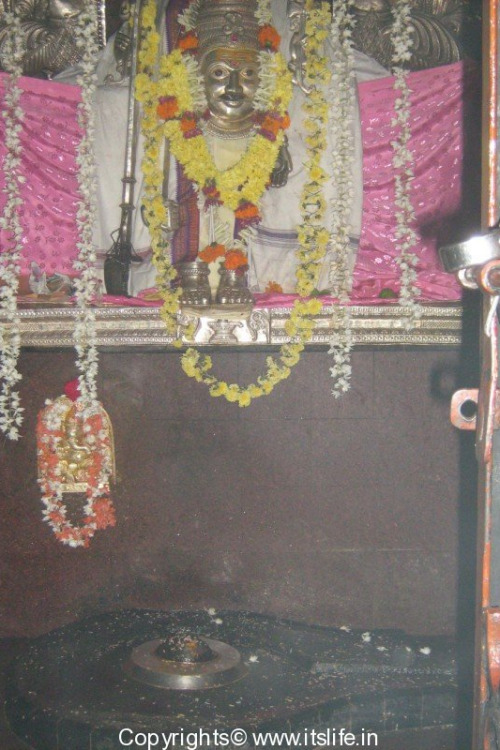 The temple is situated on a hillock and is referred to as Mailara Gudda. A fair known as Karnikotsava is held every year on the full moon day during the month of February coinciding with Bharat Hunnime festival. It is believed that on this day, Lord Mylara with his consort Gangamalavva visit Myalara riding on a white horse. 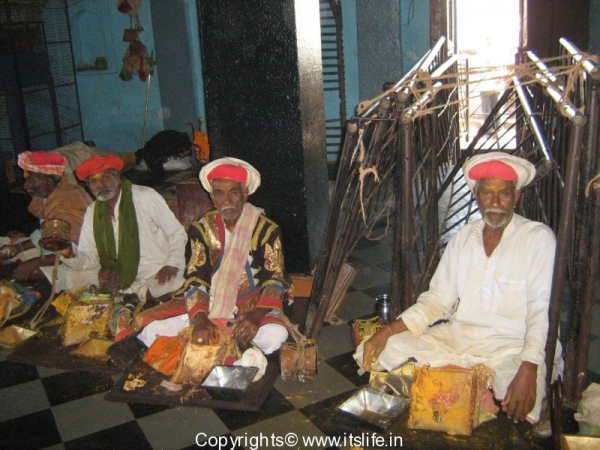 On this day, hundreds of devotees congregate at the temple and chant “Elukoti Elukoti Elukotigo…chanmalo changmalo”. Elukoti, refers to the seven crore Goravas who accompanied Mylara in the war. At noon a huge wooden bow is placed in Denkana maradi and a Gorava climbs up and announces a prophecy. 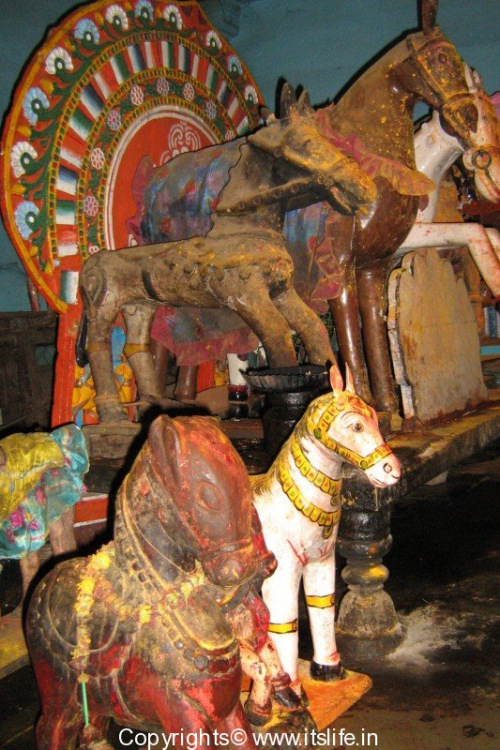 The Goravas are devotees of Mailara and they wear a black coat, white dhoti, and a black woolen rug is draped on their shoulders. The Goravas dance and act like a dog to signify the fact that Lord Mailara had mastered the Vedas so well that the Vedas were as faithful as a dog to the Lord. Just before auspicious functions like Upanayana, Wedding, and so on, a day is dedicated to the family deity and on this day the Goravas perform this dance. I have witnessed this many a time in Kurtakoti. A yellow powder known as Bhandara is given by the Gorava to his devotees. 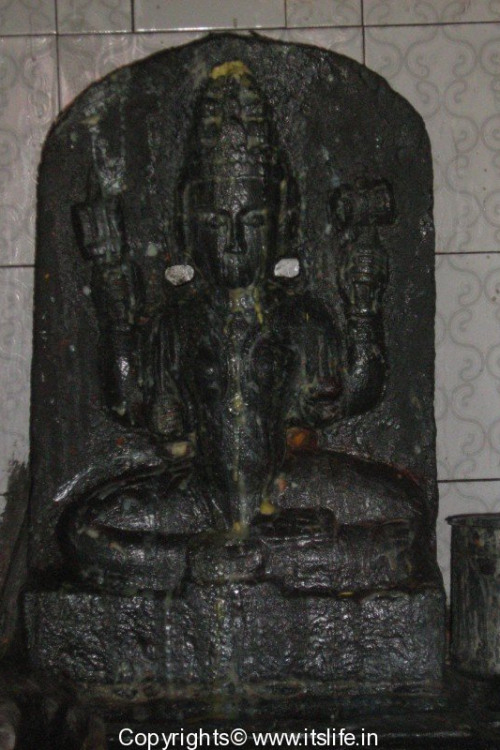 The presiding goddess of this place is Malasa called Gangimalavva. There is a big bow and big leather slippers at the entrance of the temple. The best time to visit the temple is from November to February. 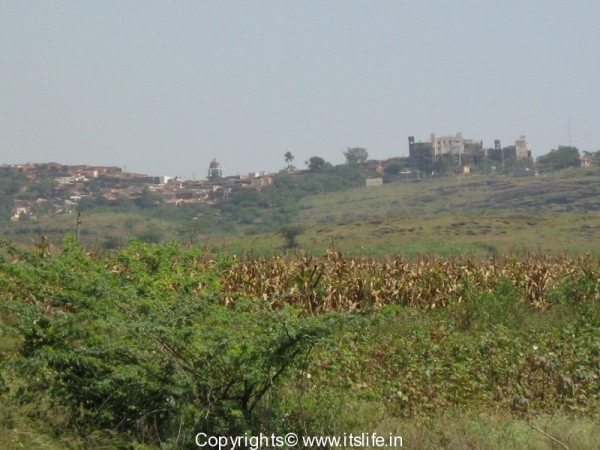 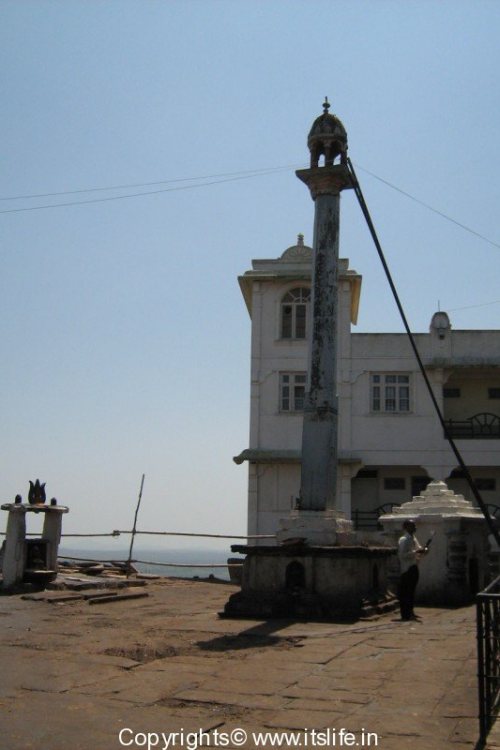 The view from atop the temple is good revealing kilometers of biluseeme / flat lands. 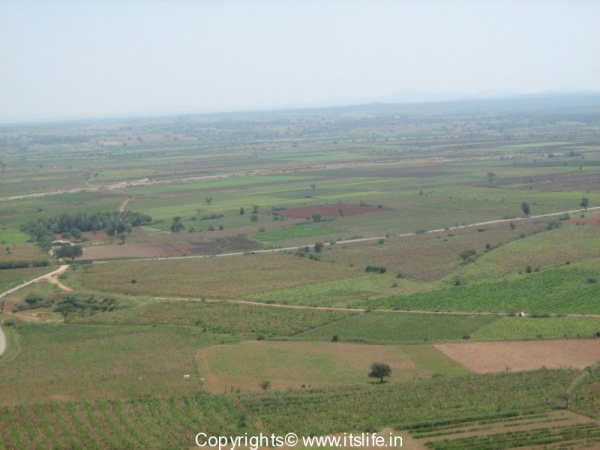 Another interesting place nearby is the Ranebennur Black buck sanctuary.

Nice write up Shantha! Did not know about this `kshetra

A very nice website with lot of good info. Well, i thought Mailara Lingeshwara is in Mailara which is in Hadagli Taluk & Devara Gudda’s deity is Malasa Marthanda Bhairava Malatesha. After reading your blog i got to know both are same 🙂
Here is some info on Ranebennur ..
http://travel.goudar.com/2011/04/ranebennur-karnataka-india-with-photos.html

Hi Shwetha,
Thank you for your visit and your note. Yes, I visited your blog. Keep it up.
Regards,
Shantha

Hi Shantha,
Thank you very much for the insight into Devara gudda.
I and my family plan to visit the temple .Thanks again.

Hi Nandini,
Thank you for your feedback. I knew about this place as it is family deity of my maternal grandfather.

Sorry for the delay in reply 🙁
Regards,
Shantha

Hi Subhanu,
Glad you are planning to visit the place. Let me know your experience.
The best,
Shantha

Hi Shantha,
Really you have done a good job. It is our family deity. we visit mailara every year. Can you please add a note about each ritual they celebrate there and significance of it like karnika, chati yetu, halu thuppa prasada. you have your grandfather to let you know about this. am curious to here from you.

Hi Dr. Renuka,
Thank you for your kind words. My grandfather passed away in 1980 and I have visited the temple only once. If you happen to visit the next time, please visit the office, they have many books regarding the place and the rituals.

I will try to get more info from my mother and post it here.
Regards,
Shantha

Good to hear that your prayers were answered.

Thanks for appreciating Mallikarjuna. Hope more people read about this place.
Regards,
Shantha

Hi Kiran,
Glad to know that you found the my website useful.
Thanks,
Shantha

Nice write up. We visited recently wit our baby. As our family deity is also Mailaralingeshwara.

Wonderful to hear that you could visit this temple.

Thanks for visiting,
Shantha

good narration but the addredd mentioned wrong it is

please change it, thank you

Thanks for update. I will change in the post soon.

Thanks for all the info. Devara guddada mailara lingeshwara is my father’s family deity. I used visit regularly. Can you give me lyrics of palisai bhandara ruchi ranga? I remember bits and pieces.

thanks for the info..
wanted more info regarding accomodation near ranibeenur .

Hi Sushma,
I am not aware of any good accommodation in Ranebennur.
Regards,
Shantha

Hello Shantha madam,
Thank u for ur most admireable information.The god mailralingeshwara is our family deity.Every year during the month of august that is in sharavan maasa we used visit tha scared and holy place mailara temple.And one more information i would like to inform u that mailaralingeshwar and malatheshaswamy are brothers.Malatheshaswamy leaves at Devaraguda and mailralingeshwaraswamy leaves at Gadhla or ppl who used to call as mailara where the scared Thungabhadra river flows….

Hi Sujatha,
Thanks for the additional information.
Regards,
Shantha

Thanks for the information Shankar Joshi. It is wonderful to know that your are publishing a book on this place and its people.

You can as well visit the place and get more information from the oldest people staying there which would help you.

Thank you so much for sharing the shloka in this post. It will benefit many readers.

Thank you so much for better understanding of Mylaralingeshwara swamy

Hi Gurumurthy,
I am glad you like what you read here. Makes my effort worthwhile.
Regards,
Shantha

Hope some reader can throw light on this story Lingesh.

Dear Shanta I did not get the postal address to send the MO to Mailara lingeshwara kindly send me the address .your effort is worth and we understood more about our mane devaru Mylaralingeshwara .

hi
Please inform me, how much distance Punt mailara Lingeshwara at Devara Guddu??

Please inform me , How much distance Pune to Mailara Lingeshwara Temple AT Devara guddu ????

can you send me the address of Mylaralingeshwara .temple which is on gudda (mountain) its some where in richoor karnataka

As far as I know, the temple is open throughout the day and closes late in the evening. I visited few years back and do not have the mobile number nor landline number.
I hope you have the darshan and the trip is pleasant.
Will try my best to update with these information.

Thanks for this information, would to be able to share that translated parini or shlokas on Mailaralingeshwara?
harsha1994mhv@gmail.com

I do not have the parini nor the shlokas of Sri Mailaralingeshwara. I will share if I get the above.

Thank you very much for the information. Nice article.

Can you please paste the entire lyrics of “palisai bhandaara ruchiranga”? I have been trying to find it online but can’t seem to find it.

Really appreciate the help. Thank you.

I think the book has been reprinted. I will update once I have the details.

Though many years have passed by, I went through your article today. Very lucid and informative.
Are you still there? India or abroad?

I am in Australia.
Possible to get the Mailar Linga Story in English?

Thank you for visiting and leaving the note. I live in India.

If I get the Mailara Linga story in English, I will definitely, let you know.