Lepakshi means “rise o bird” in Telugu and this place is situated in Ananthpur district of Andhra Pradesh. The legend says that Jatayu the mythical bird was injured by Ravana at this very place when it fought him to free Sita whom Ravana was abducting in his flying chariot. Hence the place came to be known as Lepakshi. It is one of the pilgrimage center of Shaivites / devotees of Shiva. 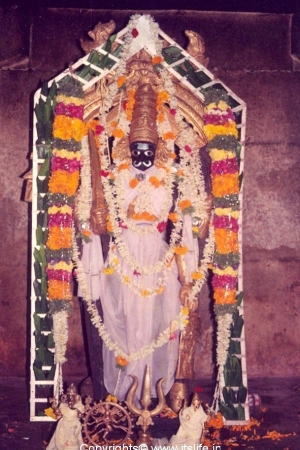 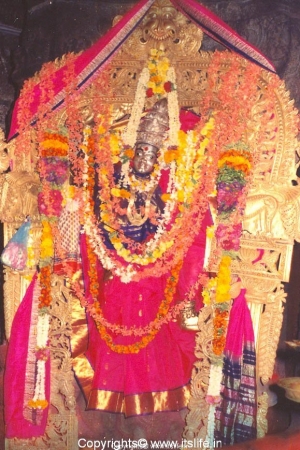 Lepakshi is famous for the ancient Veerabhadra / Lord Shiva temple, paintings and carvings in the temple. 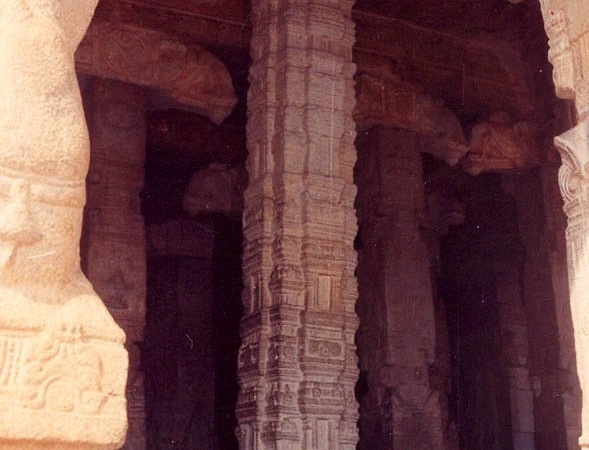 The temple is a fine example of Vijayanagar architecture built by Virupanna Nayak the chieftain of this region under the Vijaynagara king Achyutaraya in 1500 AD. The temple is incomplete maybe due to lack of funds as Virupanna built the temple without the knowledge of the king. When the king came to know that all funds were being utilized for building a temple without his consent, the king was angry and ordered that the eyes of Virupanna to be gorged. When Viruppanna heard about it he himself gorged his own eyes and threw it at the wall and the blood stains are still visible on the wall. These stories add to the spice of the place and rusticity and the divinity of the place will make you almost believe them! 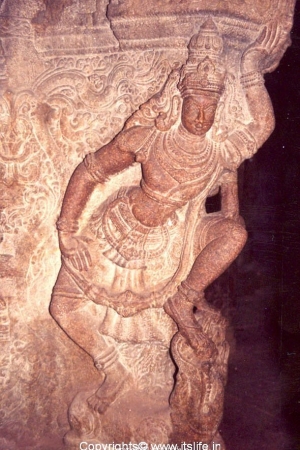 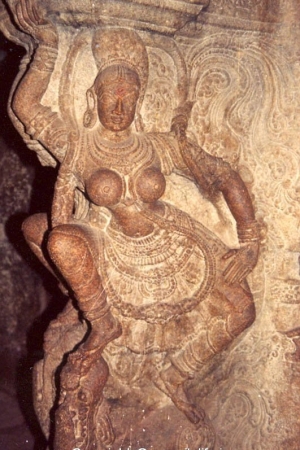 The legends and the builder are identified by the many inscriptions found on the floor. 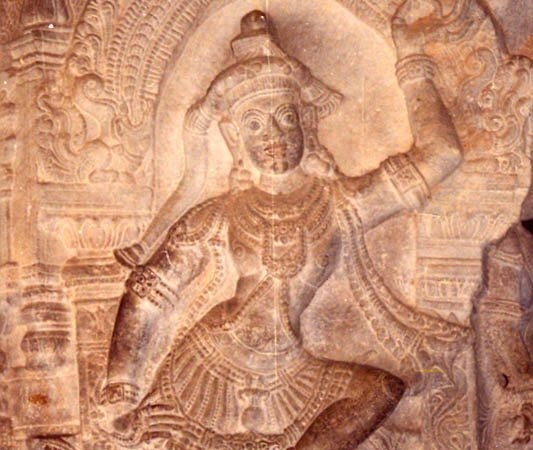 The temple complex is surrounded by a large exterior wall almost like a fort. There are stone porticos inside the temple attached to this exterior wall. The temple inside is divided into Natya Mantapa / Dance Hall, Mukha Mantapa / Main Hall, Artha Mantapa (intermediary space between the sanctum sanctorum and the temple exterior) and Garbha Gruha / Sanctum Santorum. The dance hall consists of 100 pillars with figurines in various dancing poses carved on the pillars. The central dome of the hall rises upto 20 feet in the shape of a lotus. The presiding deity Veerabhadra is a black granite idol, which is almost 6 feet in height is installed in the garbha gruha and in the main hall the presiding goddess Durga / Parvathi is installed. 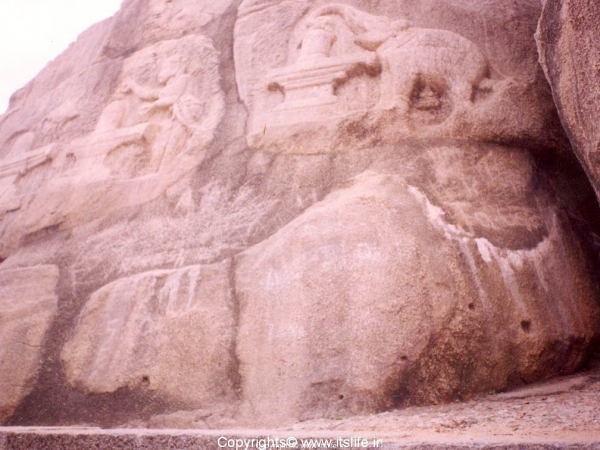 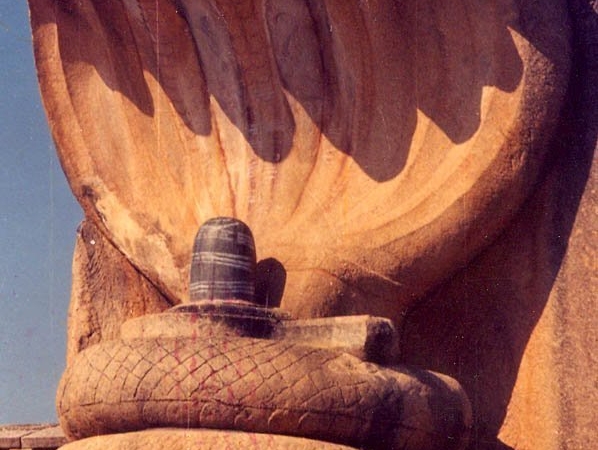 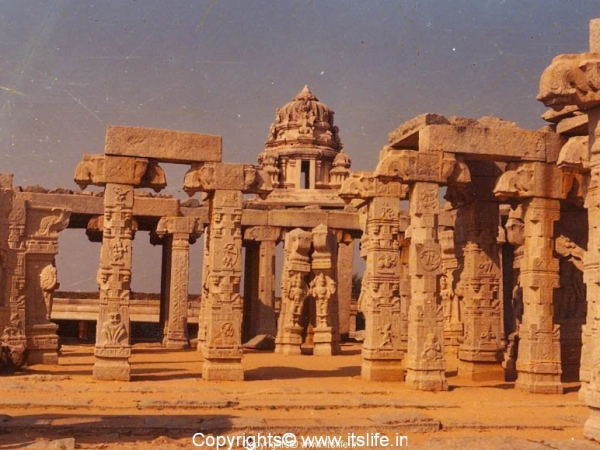 The designs on the pillars of the Latha Mantapa are that of different creepers and these designs are copied for the border of Saris / Indian costume.  The Kalyana Mantapa was supposed to have been the venue of the wedding of Shiva and Parvathi. 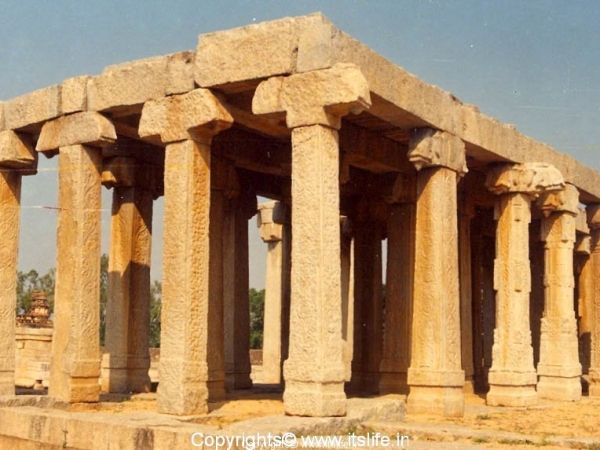 The story of Kala Hasti has been depicted on a bass relief near the Naga Linga. There is also a Kalyani / holy water tank in the temple complex. 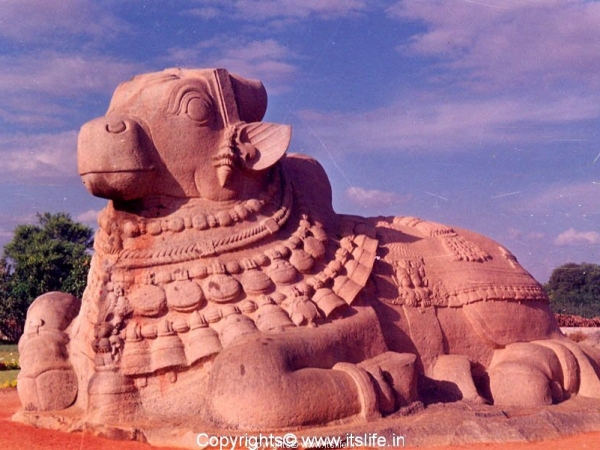 A kilometer away from the temple is the monolithic statue of Nandi, which is the largest in the world. From the Naga Linga pedestal the Nandi is visible and vice versa. At 6 pm, flood lights on the Nandi makes it look surreal.

Yes, you are right Soumya.