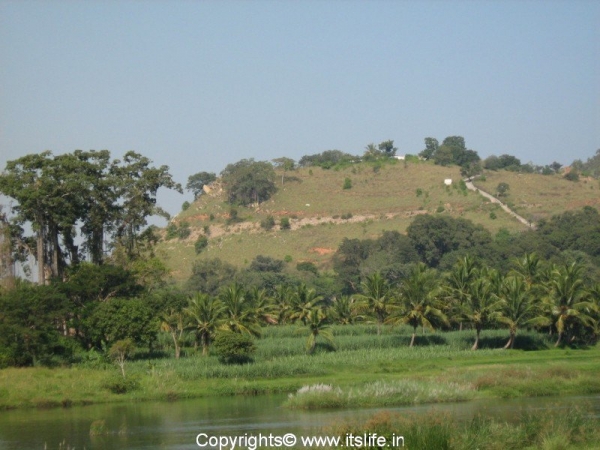 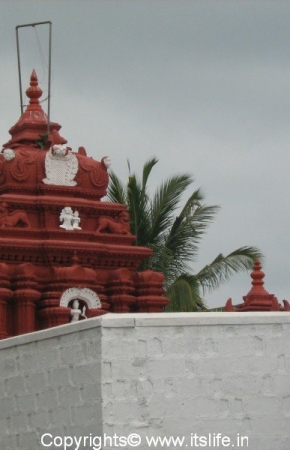 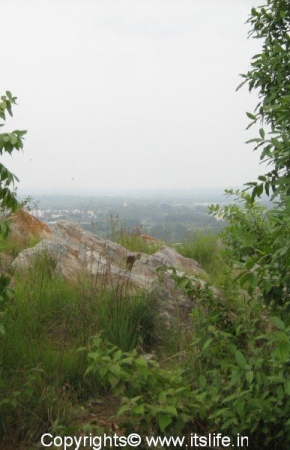 The hill is 2,697 feet above sea level.  Atop the hill is an ancient temple dedicated to Lord Vaikunta Srinivasa/Vishnu.  The black idol is beautiful and more than 6 feet tall, which was installed by sage Brigu.  The vibrations and devotion felt in the temple cannot be expressed but has to be experienced.  It is believed that if troubled people perform pooja/rituals here it brings about a positive change in their lives. 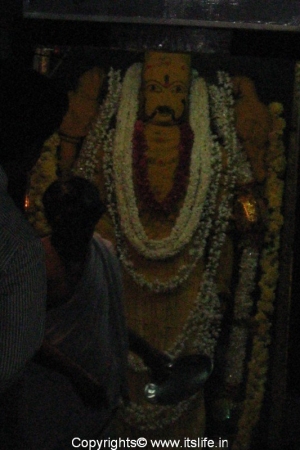 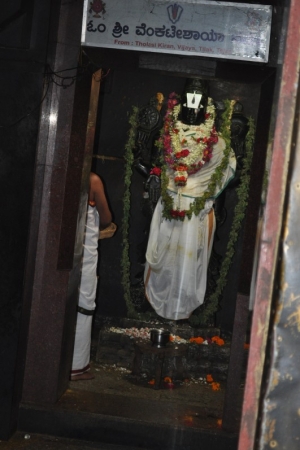 On the left of the main deity is Yoga Srinivasa and on the right are Bhoga Srinivasa idols.  Goddess Padmavathi the consort of Lord Srinivasa is installed in a separate sanctum. 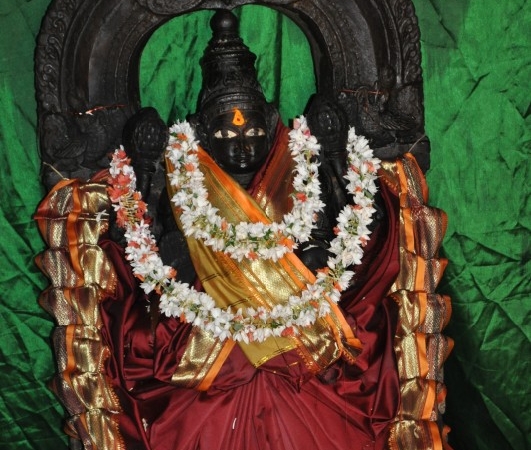 The statue of Garuda, the vehicle of Lord Srinivasa is installed facing the main deity along with the Garudastamba/the pillar of Garuda.  A big marriage hall is present in the courtyard, which was used to perform marriage.  A stone Vishnu Pada/footprint of the lord is present behind the temple. 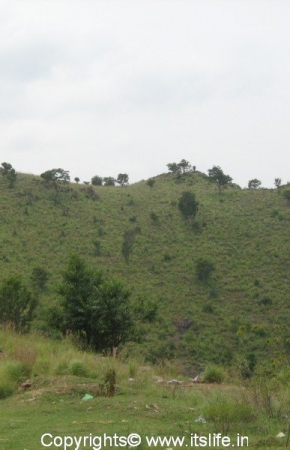 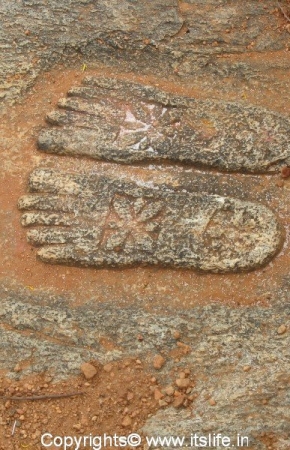 A well-maintained tar road leads to the temple.  There are 450 steps for people who want to climb up the hill.

The river Lokapavani a tributary of Cauvery flows beside the hills and joins Cauvery river at the foothills and continues to flow to meet Pashchima vahini/westwards branch of Cauvery river at Sangama.  This confluence of the rivers can be seen from the hill.  On a clear day, Chamundi hills, Mysore city, Srirangapatna Sri Ranganatha temple, Kunti Betta/hill and Nimishamba temple are all visible from atop the hill.  Now a bridge cutting across river Cauvery and Lokapavani is built near Nimishamba temple for easy access to the hill from the other bank. 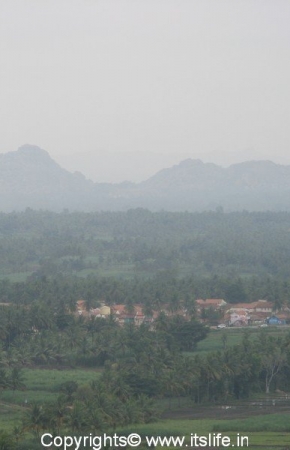 The hill has patches of grasslands, deciduous forests and tamarind trees.  The grass is sharp and is known as “Darbe”, which is offered to the lord.  Legend says that Vishnu during Varaha avatar/incarnation landed on this hill and shook his body and some of his hair fell and grew into these sharp “Darbe”.

There are few Dasayya/servants of lord Vishnu near the temple who recite the glory of the lord playing the cymbal and blow the conch shell in the end.  These people are still seen in south Indian cities begging the whole day reciting devotional songs penned by famous composers like Purandaradasa and Kanakadasa. 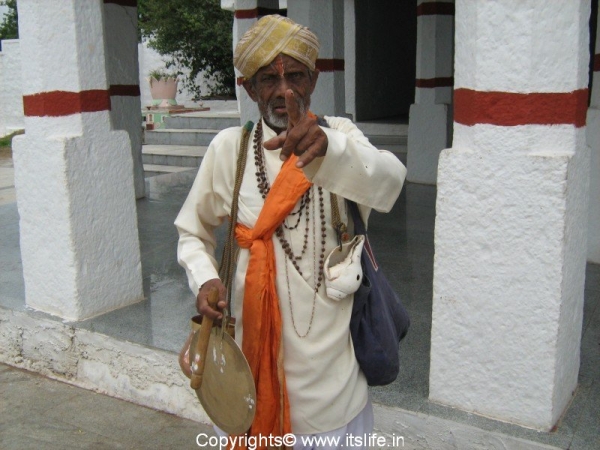 During the battle of Srirangapatna, the Britishers had placed their cannons at strategic locations on this hill.

The annual car festival was initiated by sage Vaikhanasa thousands of years ago.  The festival is held during Hindu month of Kumbha Masa Palguna, which is between February and March where many devotees congregate and take part in the festival.

like to know normal bus can go to top of the hill or not
or
atleast half dist or so ,how much time required to visit this hill

Hi Hemant,
Buses do go up to the temple and it takes approximately 1 to 2 hours to visit the hill.
Regards,
Shantha

Karighatta Srinivasa is our family deity and we visit Him every time we go to Bangalore.Going by car or a small van is the best means of travel.

Yes Anil…Srirangapattana is a historical place with abundant nature delights and also a pilgrimage center.

We perform vishesha pooje in kharighatta every 3rd shravana sheniva, this time its on 28th August 2010, please make yourself to visit temple during this time, we also prepare Bhojana(prasada) at temple premisses and serve lunch for around 600 devoties on this day.

Thanks Vinay for the invitation.

What’s the temple timings on week days as well as week ends? Also, let me know the phone no. of the Bhattar.

Hi Subramanyam,
The temple is open by 9:00 a.m till 1:00 p.m. I am not sure about the timings in the evening. I am sorry, I do not have the phone number of the priest 🙁
Regards,
Shantha

Hi Subramanyam,
I visited Karighatta on Sunday and I have updated the post with the timings and phone number.
Regards,
Shantha

You have provided excellent info. on the temple and the temple timings. I searched so many sites to know the timings. But to no avail. At last I got your site and got the required info. including the phone number of the Bhattar. Thanks.

I am travelling by bus from bangalore. can I reach the temple from Nimishamba temple in srirangapatna or I have to take a bus/auto from srirangapatna busstand to reach this temple.

Hi Sathish,
You can reach Karighatta directly from Nimishamba.
Hope you have great trip.
Shantha

are there frequent ksrtc buses to reach karighatta from srirangpatna? if yes, please tell me the timings………

No Abhishek, there are no KSRTC buses to Karighatta from Srirangapattana.

thank u for information given by u even we r going 2 visit this place due course.

Have a great time, Kasturi rangan.

I am visiting with karighatta this saturday with family. Thank you all for the info…..

Have a nice trip, Shankar.

After reading this, I visited twice. Very nice place. The view from the hill is enchanting. Onething I wanted to share with all. I am already aged about 69years. From the small child of 6years, I have been visiting Tirumala-Tirupati, as He is our kuladaiva. In some years I had to have two to three visits in a year, due to various reasons. My Upanayanam, my marrige, My children’s Namakarana, Annaprashana, Karnavedhana, etc., have been performed there itself. So, it is not at all strange if I say that I have visited TTD not less than 60times hitherto. But, according… Read more »

Hello Subramanya Sharma,
Thanks for visiting and sharing your experience. You are blessed to have visited Thirupathi so many times. My mother recollects the serene Thirupathi temple in early 70’s, which is quite a contrast to the present conditions. I have been to Tirupathi once and stood in the paid queue for 13 hours for a 5 second darshana! Hope to have a better experience the next time.
All the best.
With regards,
Shantha

Thank you Shantha. As I have already said that I have visited Tirupathi not less yhan some 60 times. I was aged about 6 years, when I visited for the first time. That was in the year 1951. I still remember that occasion, as if I am witnessing a black and white Kannada cinema of 1950’s. My father made me to sit on his neck and took me to the top of the hill, himself by climbing, on bare feet. At that time the rush could be compared to the rush of any popular nowadays temple in the heart of… Read more »

Hello again,
It is just awesome reading your experience. Yes, I would love to read the book you have written. I will inquire in Sapna book store, Navakarnataka, and Gangarams and buy it and will also place a request for it to be made available in a library in which I am a member. If the book is not available, then I will request you to send me the book. Thank you so much for offering to send the book.
Regards,
Shantha

It is available with Kamadhenu book store in Seshadripuram main road, near old swastik talkies. It is not available elsewhere. I have only published that book. In 1992, twenty years back, we, 17 persons walked the whole distance of 276 kms. from Bangalore, in 7days. I have written my experience of our padayatre. I wrote the manuscript in 1992 itself. But I published the book recently.

Thanks for the information. Will visit this book store soon.
Regards,
Shantha

Very nice all the needful information is well written illustrated with nice pictures. Very helpful for visitors. One can also visit NIMISHAMBA TEMPLE very close by ( one has to cross the river through a newly opened bridge).

u done a gud job

Thanks for the note, Achyutha.

Hi. Our diety is lord karighatta srinivasa. Have been visiting the place from a decade. It’s just awesome!! this November 30 we have planned a trip to karighatta from our yoga samiti. So we are coming there in a bus. Can a big bus come till the top of the temple? And since it’s a saturday,the temple remains open even in the afternoon right?

Hello all, karighatta srinivasa is our family diety and we visit him every year. We go there by car. My question is can a bus with a load of 50 members go up the hill?