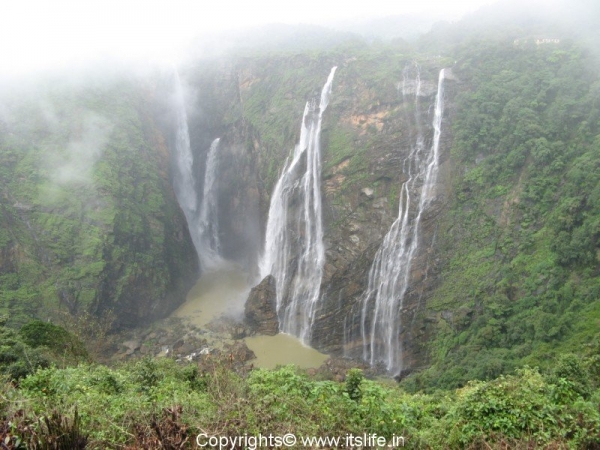 Like there is a saying “Visit Venice before you die”, the above thoughtful Kannada song written by Mugur Mallappa says “what all have you seen after being born as a human….till death, you are involved in up’s and down’s of life… and cannot carry everything with you when you die, so make sure you visit Joga Gundi / Jog Falls at least once in your lifetime! 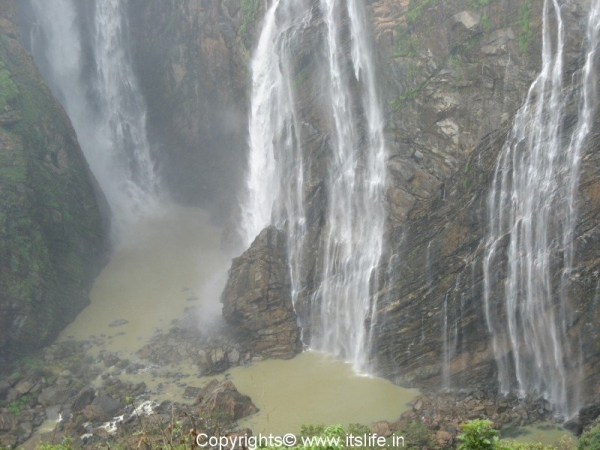 Jog Falls also known as Gerusoppa and Jogada Gundi is situated in Sagar Taluk, Shimoga District, Karnataka. It is 400 Kms from Bangalore and 30 Kms from Sagar town.

This waterfalls is the pride of Karanataka where river Sharavati falls from a height of 950 feet into the valley surrounded by hills covered with green wet forests. This falls is the highest water fall in India and the 5th highest in the world. 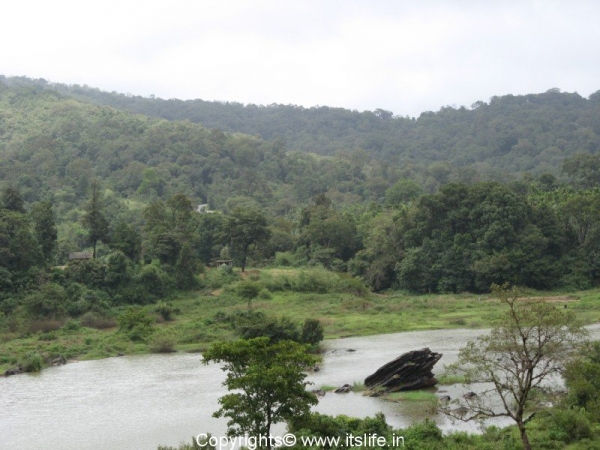 The birth place of Sharavathi River is at Ambuthirtha and from here she flows north-west in to the Western Ghats and leaps down to form the magnificent waterfalls and ends her journey at Honnavar to meet the Arabian Sea. 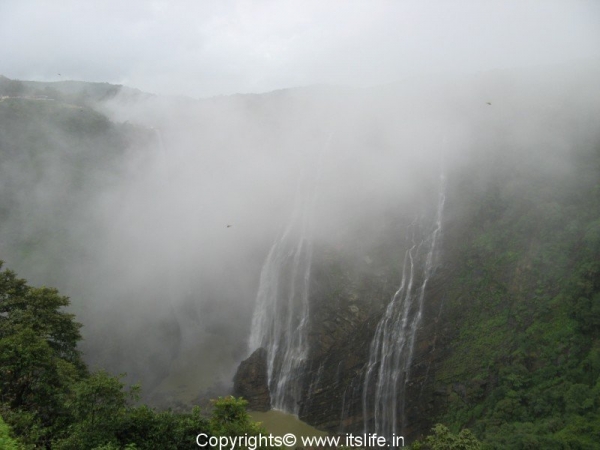 Jog Falls and its surrounding area have been declared as one of the top ten UNESCO ecological hot spots in the world. The splendor of Sharavathi River splitting into 4 and cascading straight down the valley can be enjoyed during July to October, when the rains fill the Linganamakki dam and the gates are opened to release the water back to the river. 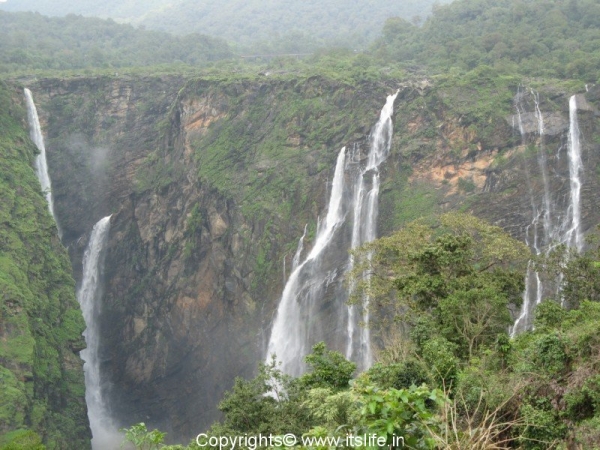 Each of the four branches of the falls has been named according to the pattern in which it cascades down the rock face. The names are –
Raja (King): The water in this section falls in a very dignified manner with great confidence.
Roarer: This part of the falls makes enormous amount of noise as it gushes down a slope and twists 90 degree and gushes out roaring.
Rocket: Here the water falls down at high speed into the valley. The water formations are like white small rockets coming down incessantly.
Rani (Queen) / Lady: Oh! The way she falls down is unbelievable. The water falls down this section so gracefully and elegantly to the extent of hypnotizing you to believe that it is falling in slow motion resembling the walk of a Queen on the aisle to the throne.

There are easy steps to trek down to the bottom of the falls. It takes around 40 minutes to get down and two hours to climb up. It is extremely slippery during monsoons. 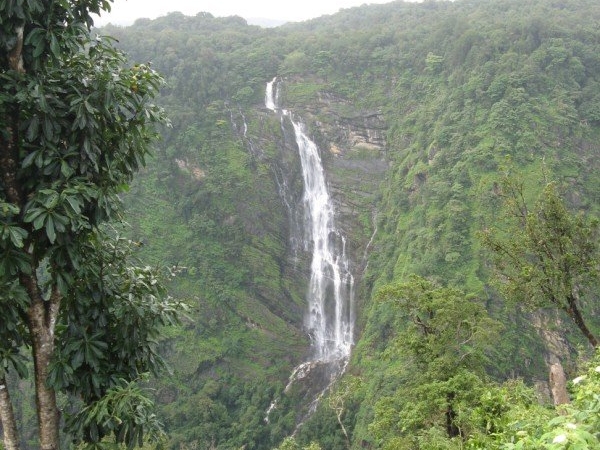 There is another waterfall on the opposite hill known as Mavina Gundi, which is visible only during the monsoon season. The scenic beauty all round is mesmerizing with never ending ocean of overlapping hills. 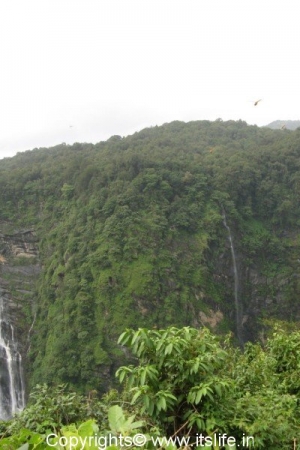 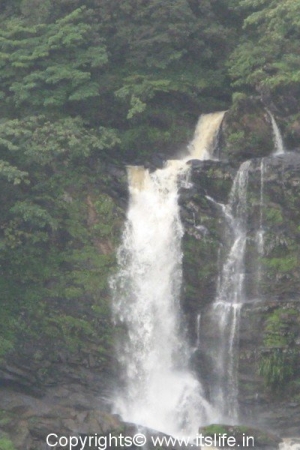 Drive around the hill to look down at the Sharavathi Valley, which winds in between the hills and also get a glimpse of the Hydraulic power station, which generates about 30% of Karnataka’s power requirement. The power station was started in 1949 and was named after the Mysore king as Krishna Rajendra hydro electric project. Now, it is known as Mahatma Gandhi hydro electric project. 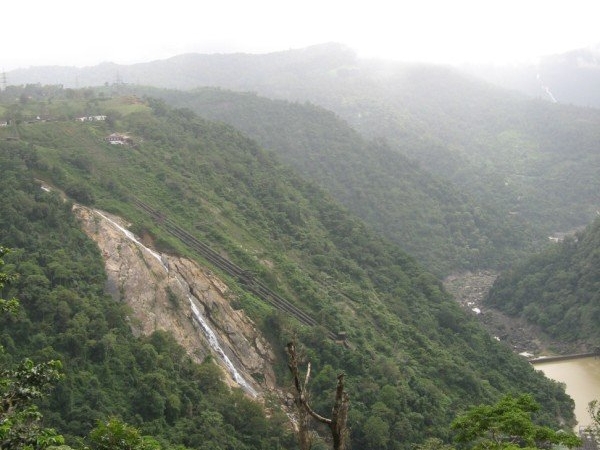 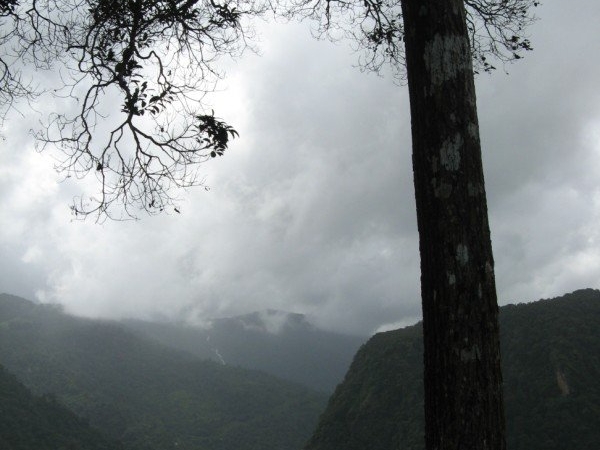 Drive to the other side of the falls, where you can see the roarer section of the falls take its first plunge. The view from here is entirely different and beautiful. 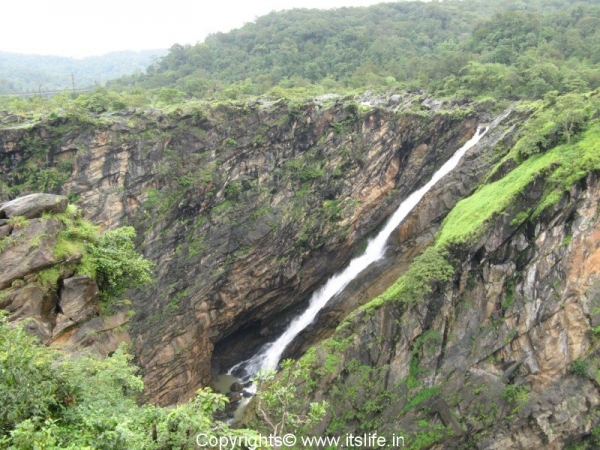 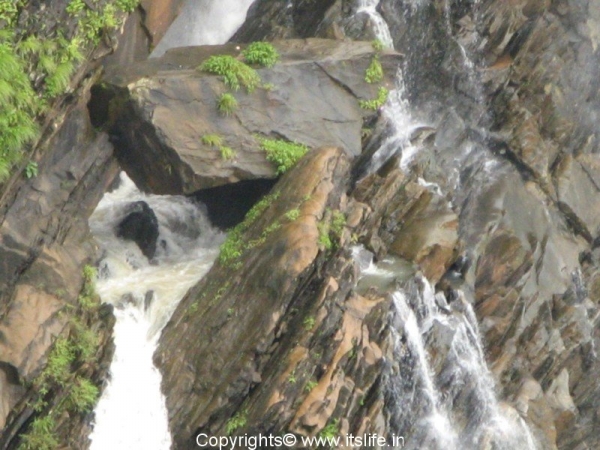 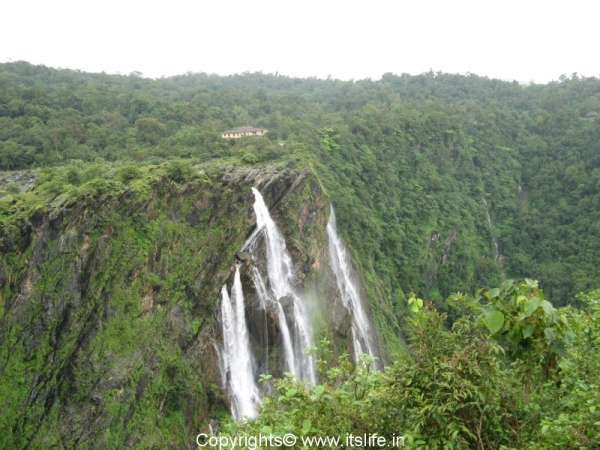 Some of the nearby places that you can visit are Varadamoola, Ikkeri, Keladi, Gudavi Bird Sanctuary and Varadahalli, which is the place of Sri Sridhara Swamigalu and Durgamba temple.

Place Statistics:
Type of Place: Water Falls
Situated: Sagar Taluk, Shimoga District
Distance: 400 Kms from Bangalore, 30 Kms from Sagar, 102 Kms from Shimoga, 60 Kms from Sirsi
Transport: Well connected by rail and road. Nearest railway station is at Talguppa (16Kms). Government run buses ply up to the falls.
Facilities: Rest room is available. KSTDC run restaurant and lodging facilities are available; Accommodation is available in PWD guest house, Electricity board guest house and Forest guest house for all the above prior bookings is needed at Sagar in the respective offices. Sagar and Sirsi have few lodges and many tiny restaurants.

p/s: We would like to invite all of you to join our blogging community which helps you to get more visitors to your blogs. It’s totally free and you get the chance to meet other celebrity bloggers. Visit us at IMCurtain

Kalyani, thank you for the comments. Shantha

We are planning a trip to Jog this week. Would like to know the rain conditions and overall if its the right time to visit. Please let know me know.

Hi Vasanth,
I visited Jog in August 1st week this year and the photographs are in this post. Since I live in Bangalore I don’t know the weather conditions there, but I have heard the Linganmakki dam has opened all the gates and hence the falls is in full splendor.
Wish you a safe and happy journey,
Shantha

Hi Shantha
Thanks for the quick reply.
I am a bit apprehensive abt travelling by car. Planning to take a bus from b’lore. If you could direct to some place where i can get info about bus services, it would be of great help. I am from Chennai

Hi Vasanth, Please access this link http://59.162.166.116/AWATAROnline to book online for KSRTC buses. Departure will be from Bangalore main bus stand known as Kempegowda Bus Stand. Rajahamsa buses are comfortable with AC and the rates from Bangalore – Sagar town are 275Rs for adults and 138 Rs for children. From Sagar you will have to hire a private vehicle to travel to Jog. For staying Varadashree hotel at Sagar is good and the number is 08183- 228999, please book before you go. If this is not available then try at Durga Lodge Sagar (08183) 226305. This link http://www.shimoga.nic.in/hotels.htm will give… Read more »

i have visited a jogfalla on tue & it was very good place to visit.