Tucked in the lush greenery of Manasagangotri is a quaint and grand mansion known as Jaya lakshmi Vilas Mansion in Mysore. This is part of the heritage buildings of Mysore and was built for Maharaja Chamaraja Wodeyar’s eldest daughter Maharajakumari Jayalakshmammanni who was married to Narasaraje Kemparaj Urs.  The foundation stone was laid by  her highness Sri Kempananjammanni Avaru,  Maharani Regent of Mysore in November 1901.  The building was completed in December 1905. 7 lakh rupees were spent to build this mansion and Rs. 1.17 crore rupees was spent to restore it. The restoration work of this heritage building completed in 2006 with the funds provided by Infosys. 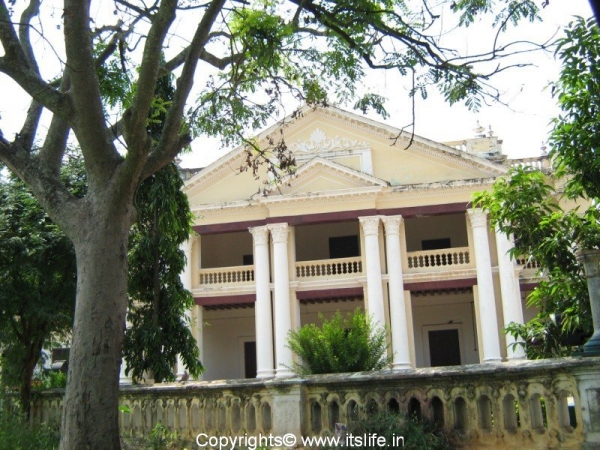 The Jaya Lakshmi Vilas mansion is built on a tiny hillock and it now belongs to the Mysore University. The Mansion has been converted into a museum, which displays objects from folklore, literature, archeology and geology.

The Jaya Lakshmi Vilas mansion has 125 rooms, 300 windows, 287 exquisitely carved doors and sprawls over an area of 1.20 lakh square feet. The building is built in European style and the interiors are undoubtedly Indian. The tall doorways with inbuilt ventilators give a very majestic look to the mansion.

The highlight of the building is the beautiful hall known as Kalyana Mantapa beautifully decorated with 12 carved wooden pillars. The floor is also of wood with a gallery on the first floor. The roof of this hall is covered with painted glass for natural light to stream in. In this area, objects used by Kannada literary giants are displayed.

Photography is not allowed inside the palace.  Other places of interest nearby is Kukkarahalli Kere / Lake.