This ancient temple was built here dedicated to Lord Kodandarama.  The uniqueness of the idol installed here is that Sita is standing to the right side of Sri Rama instead of the usual left. Legend describes that Lord Rama during his tenure in the forests stayed in this place on the behest of the tribal couple Chuncha and Chunchi.  It seems during that time there was not a drop of water here, and when Rama’s wife Sita wanted to have a bath, Rama instructed his brother Lakmana to facilitate Sita Devi’s wish.  Lakmana shot an arrow on the rocks and water started gushing out in plenty and Sita Devi could take her bath.  Also in this forest Lord Rama met Agnatha Rishi (Unknown Sage) and was impressed by his devotion to lord Narayana, so Rama asked the Rishi to ask for a boon and the Rishi asked Lord Rama that he desired to see Lord Rama with Sita on his right side.  The boon was granted and so was the idol installed in the same manner.  There are two Hanuman temples, one at the entrance to the temple and the other after the temple near the river. 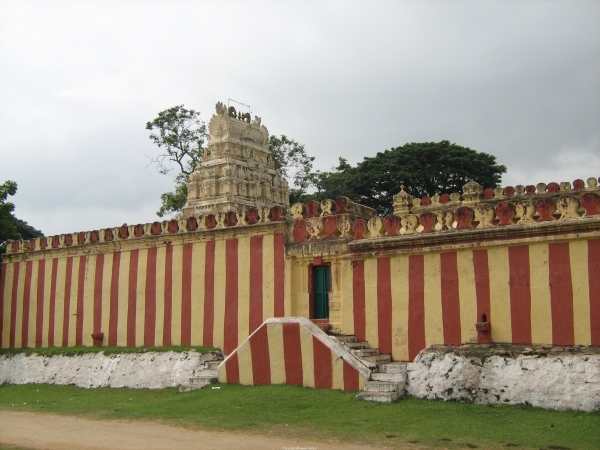 The most astonishing feature of this temple is that even though the falls beside the temple makes a deafening noise, inside the garbhagudi (Sanctum Santorum) nothing of the roar can be heard.  It is as though the falls does not exist.  The legend narrated for this phenomenon goes like this – it seems Lord Rama was tired of Sita Devi’s constant complaining so he cursed that women should not talk unnecessarily and add to the noise pollution.  Even though women till now do not seem to have been touched by the curse, river Cauvery’s (who is considered a woman) roar at least is not heard in the garbhagudi of the temple. 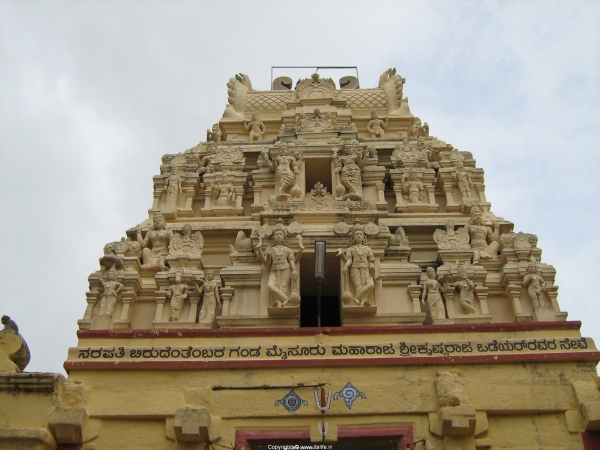 Brahma Ratotsava (car festival) is held on the day of Makara Sankranti every year.  This day falls in January.  The cattle festival, which is one of the biggest in this region, is held during August.

Many water and shore birds can be spotted here.  Good place to picnic but the litter around is quiet disappointing.

Place Statistics:
Type of Place: Waterfalls and an Ancient temple
Situated: Mysore District
Distance: 57 Kms from Mysore, 7 Kms from K.R.Nagar
Type of transport: It is well connected by Road.  Buses ply between Mysore and Chunchankatte
Facilities: Nil, but you can find bakeries and small eateries and hotels at K.R.Nagar