Usually a visit to a temple is to offer prayers and exit. But, there are many ancient temples in India from where you resist exiting and continue to go round in circles admiring the ornate carvings. One such temple is the Sri Chennakesava Temple – Belur. 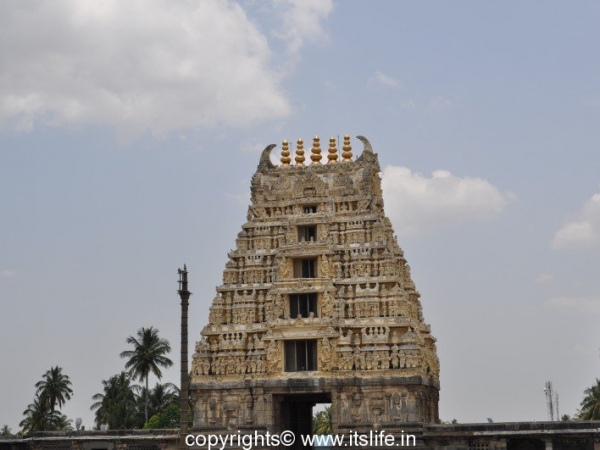 The Hoysala king, Vishnuvardhana dreamt about Lord Chennakesava while on a night out at Baba Budan Forest in Chikmagalur. Immediately he decided to build a temple in his capital city Belur dedicated to Lord Chennakeshava (Lord Vishnu). 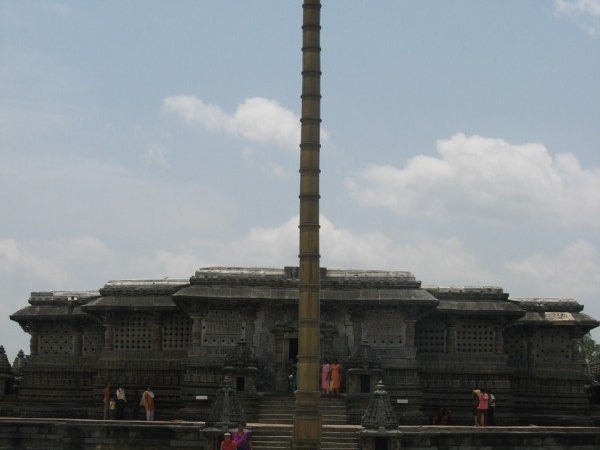 Thus, the temple was visualized in 1117 AD and the king appointed Dasoja and his son Chavana as the designers of the temple. The masterpiece was completed in 100 years and has stood the test of time and continues to enthrall the visitors till date. 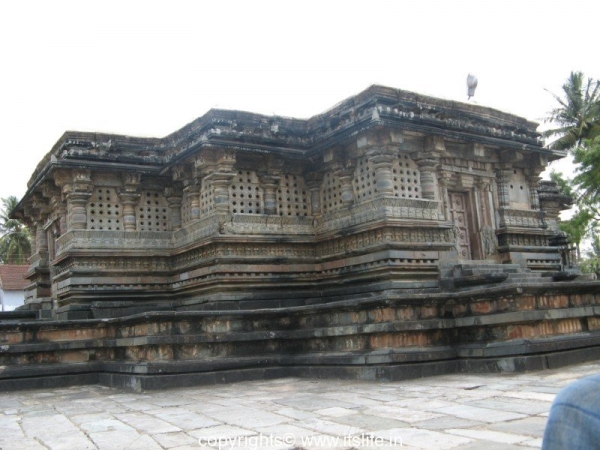 Various theories have emerged on the reason to build this temple. Whatever the reason might have been, it is a priceless gift for the people of the region to pray and admire the poetry in stone. 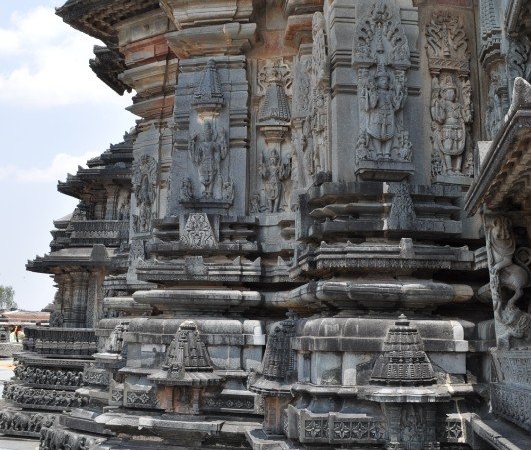 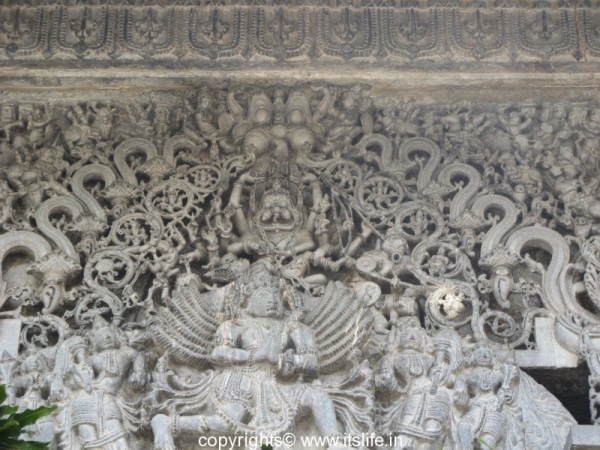 There are three entrances to the temple and at the main entrance is the sculpture of Garuda carrying Vishnu to greet you.  Each of the entrance is guarded by sculpted Dwarapalakas (doormen) on either side. 178 feet long (east-west wise) and 156 feet broad (north-west wise), the temple has 7 rows of friezes below the window level on the outer wall. The rows include elephants, lion faces, creepers, garlands, dancing men and women, and damsels in various poses. 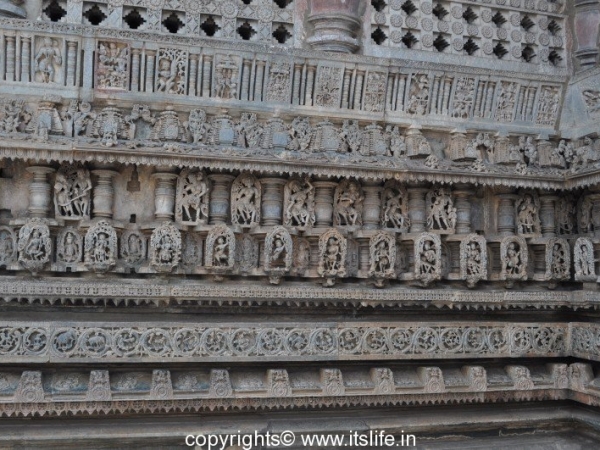 Over these rows are bigger sculptures depicting Dasha Avathara, 24 manifestation of Vishnu, scenes from the Upanishads, Purana, and other mythological stories. 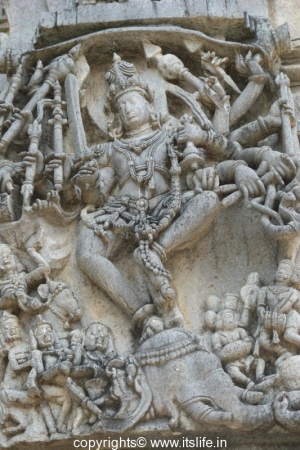 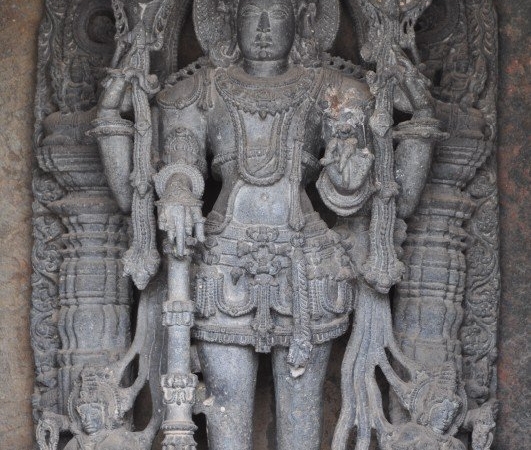 The windows in-between are intricately carved. 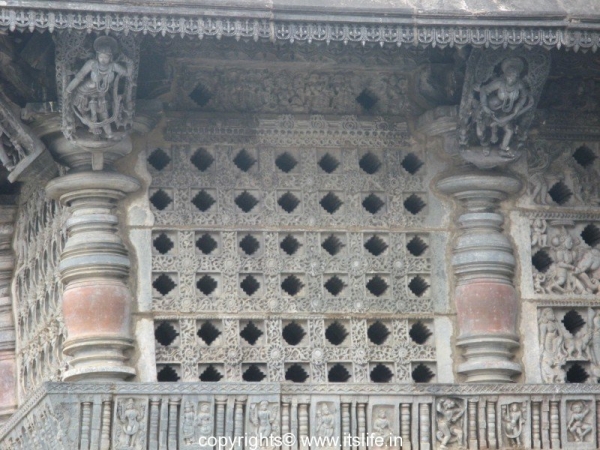 40 pillars on the outer walls have bracket figures of beautiful dancing girls. 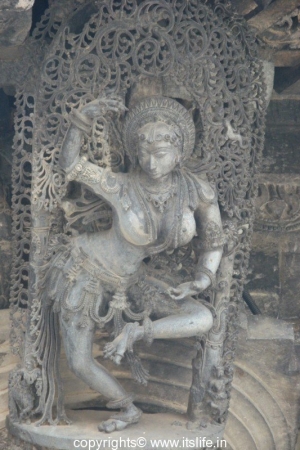 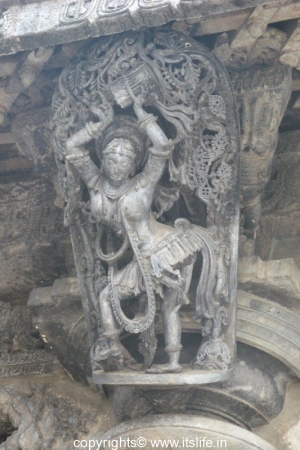 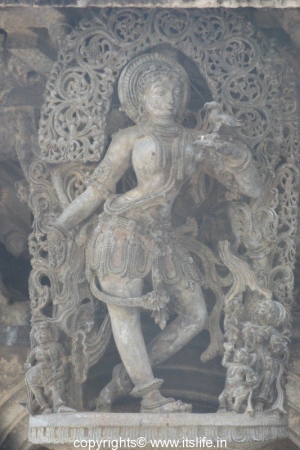 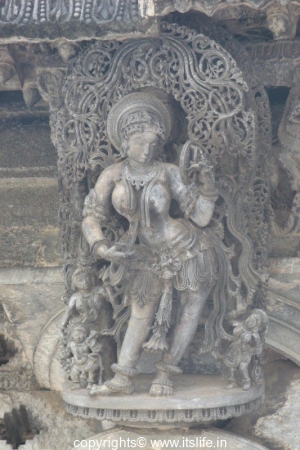 The Garuda Sthamba (Sacred pillar) facing the main temple was installed during the Vijayanagar period, whereas the Deepa Sthamba (pillar of lights) was installed during the Hoysala period. The Deepa Sthamba is 42 feet tall and known as pillar of Gravity as it has no foundation and stands on 3 points touching the pedestal.  The whole weight is balanced and is standing upright on its own. 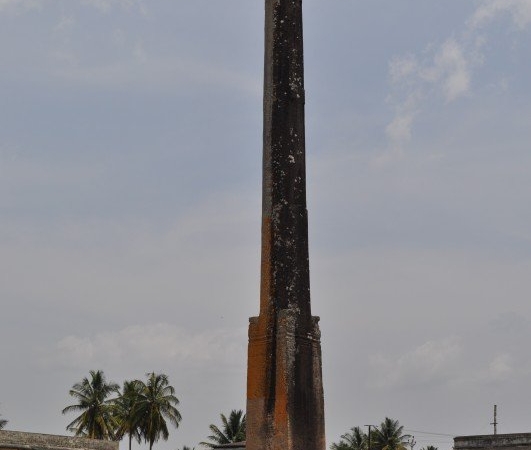 Inside the temple is the Navaranga (inner pavilion), which has stellar shaped and circular tall monolithic pillars with carvings. The ceilings are also intricately carved. 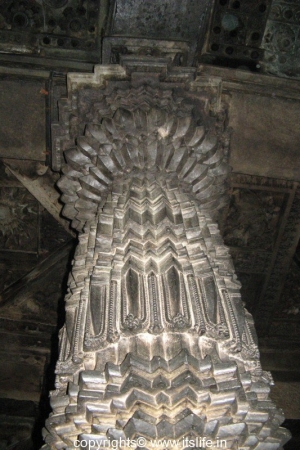 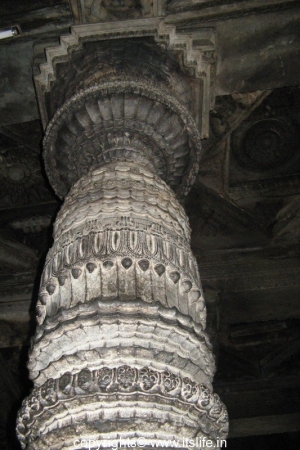 Here, the bracket figures of damsels on the four pillars are noteworthy for their proportion and are believed to be sculpted resembling Queen Shantala. 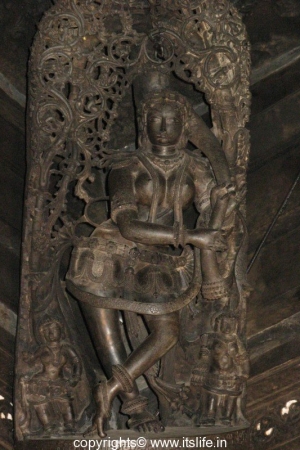 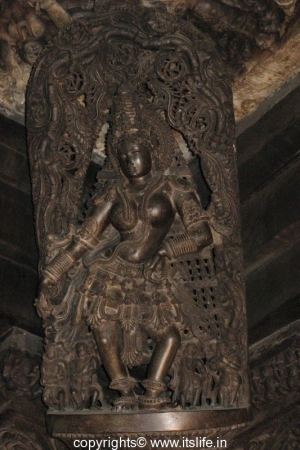 Queen Shantala was the wife of King Vishnuvardhana who was an accomplished classical dancer. 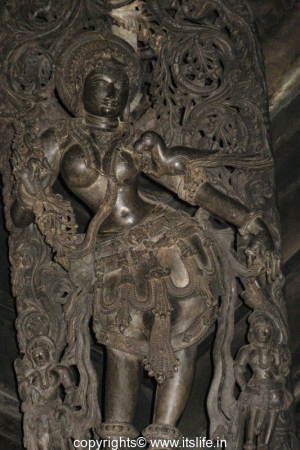 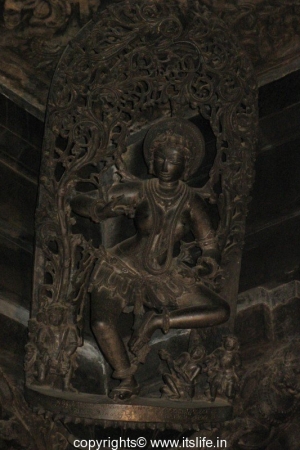 Another pillar with intricate design with many gods and goddesses carved on it is extremely attractive and is also worshiped. 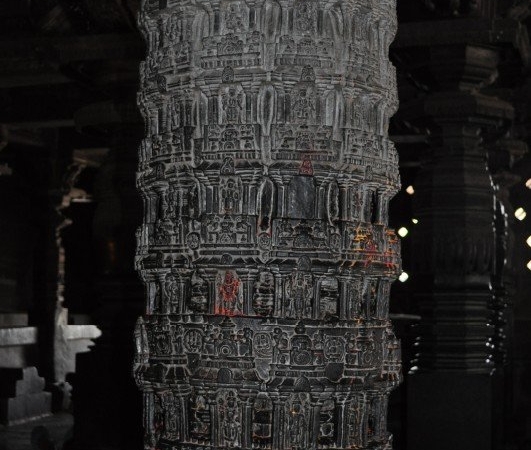 Darpana Sundari, Bhasma Mohini, and the Huntress sculptures are most popular among the damsels. 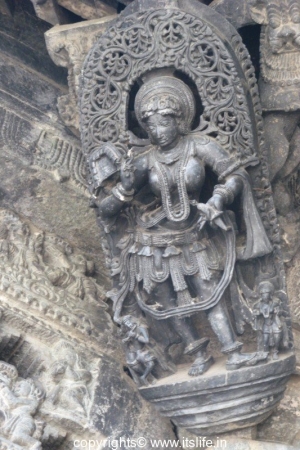 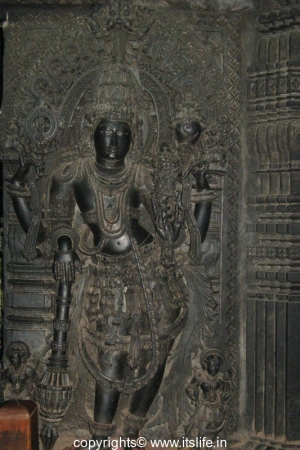 Lord Chennakesava stands majestic in the sanctum sanctorum. No words can describe the beauty of the statue of the handsome Lord. The idol is two meter tall with chaturbhuja (4 hands). 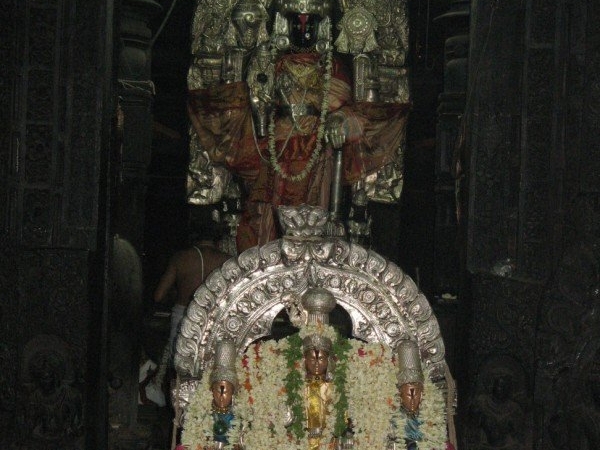 Kalyani (tank) is situated in the north east corner of the complex.  This tank is known as Vasudeva Sarovara.  The inscription says that it was built by Hoysala Ballala-II in 117 A.D.  At the entrance to this pond are two Elephants at the sides, and two pavilions to the north and south.  It has receding steps from all the four sides. 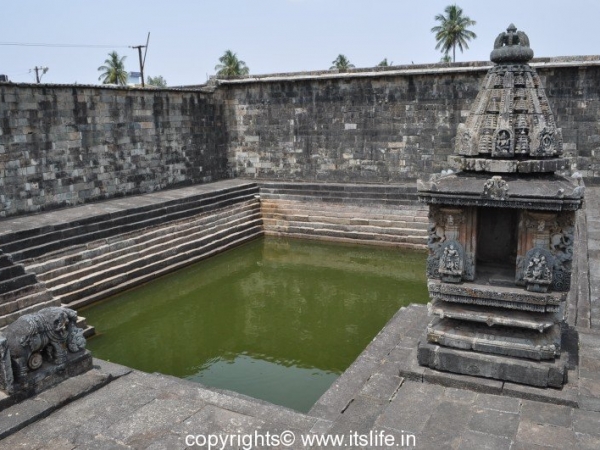 Artists have signed their work on sculptures and this has helped identify the number of sculptures sculpted by each of the talented artists. Ruvari Mallitamma, Dasoja, Chavana (son of Dasoja), Malliyanna, Nagoja, Chikkahampa, and Malloja have all sculpted making this a priceless national treasure.  108 inscriptions are found inside the temple complex in Kannada, which describes the temple and the architects. 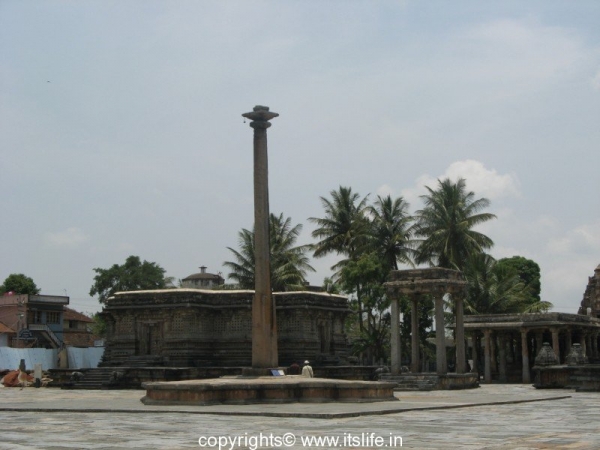 It is no surprise that it is recognized by UNESCO as a world heritage site. 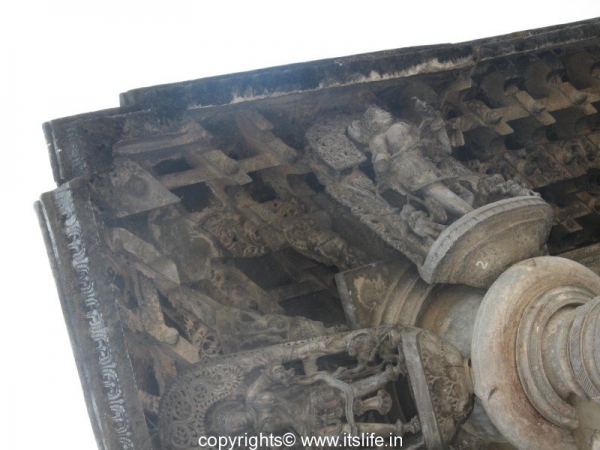 There are other temples like the Kappe Chennigaraya, Rangamanayaki, Soumyanayaki, Hanuman, Narasimha, Vijyanaryana, Saumyanayaji, Andal and so on in the precincts of the main temple.