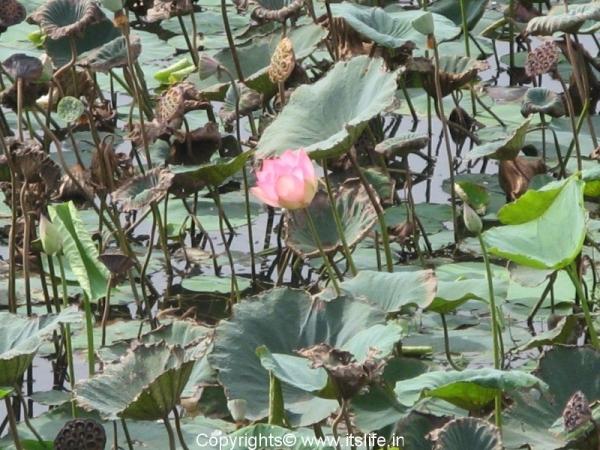 Picture1 – A Lotus pond on the way to Bheemeshwari

On an early morning of July we set off with a lot of enthusiasm to spend a day at Bheemeshwari fishing camp situated 100 kms from Bangalore.  Monsoon rains had washed the countryside to display soothing views to the eyes weary of blinking screen, artificial lights and temperature. 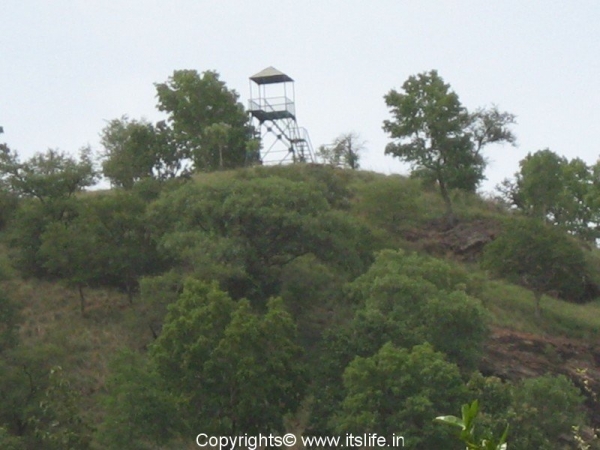 Down Kanakapura road we drove singing songs and exclaiming at beautiful unidentifiable birds.  The winding roads led into hills covered with greenery and as we passed Muthaththi we caught the first glimpses of river Cauvery.   Few minutes from there, the huge gates of Jungle lodges at Bheemeswari opened to a treasure trove of adventure and nature. 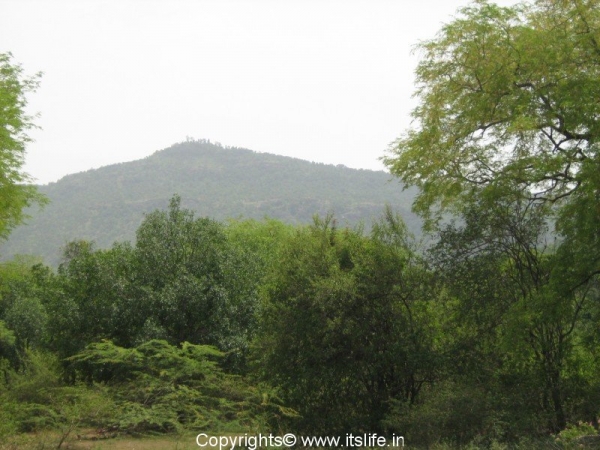 Bheemeshwari fishing camp is spread on the banks of river Cauvery in between the splendid Shivanasamudra falls and Mekedatu.  After a welcome drink you are given the option of going on a short or long trek along with a guide. 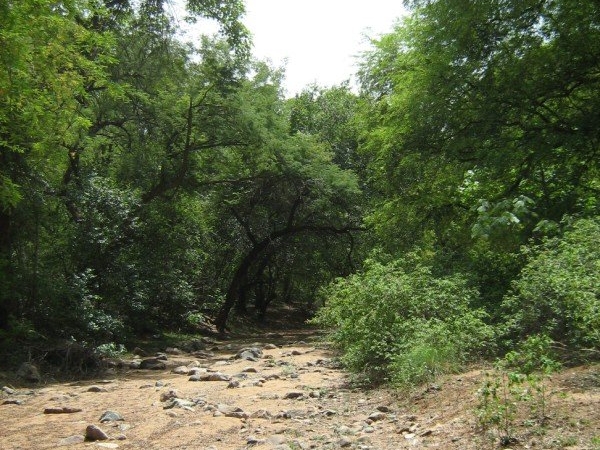 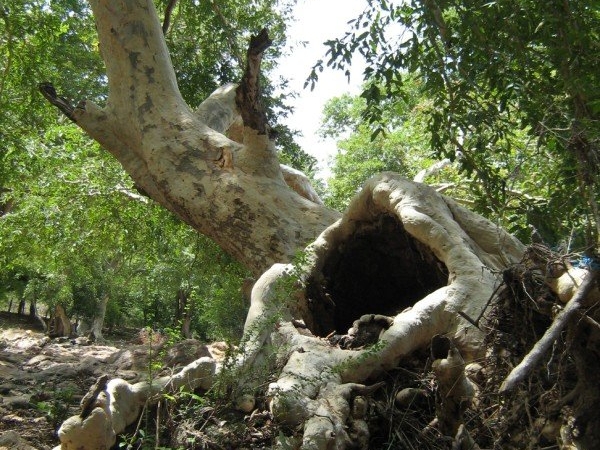 Picture4 – Dry River Bed and an interesting trunk of a tree

Trekking along the riverside is a wonderful experience and I collected very small driftwood in some amazing shapes for Ikebana. 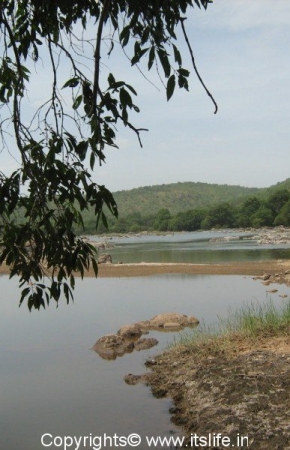 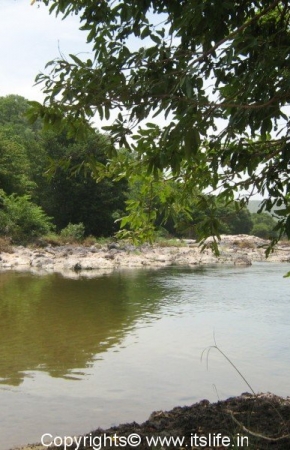 While trekking there are opportunities to spot wild animals like deer, elephants, jackal, leopard etc. 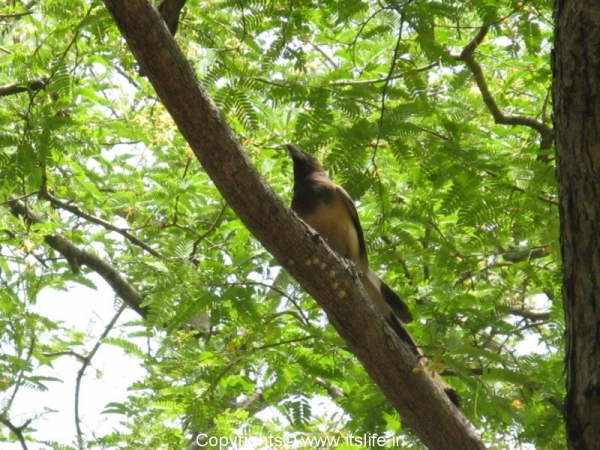 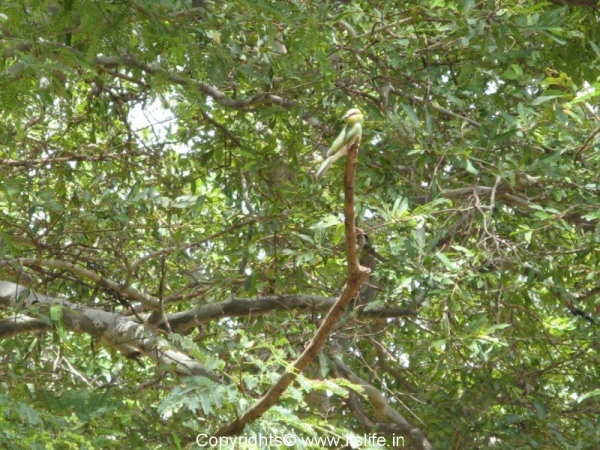 This place is home to more than 200 species of birds.  We spotted deer, grizzled squirrel, monkeys and birds like bee-eater, pied crested cuckoo, and kingfisher.  Giant butterflies flutter around adding color and life. 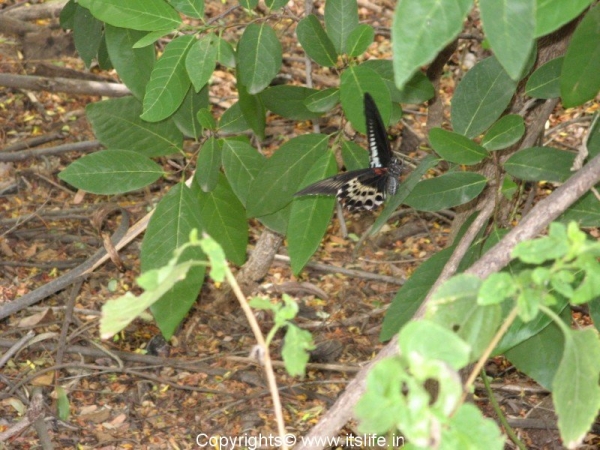 Back from trekking you can go for Ayurvedic treatments, or just laze on the hammocks looking up at the sky through the canopy of tamarind and rain trees or shop for a souvenir or clamber on a rope walkway or swing to your heart’s content.

After a buffet lunch, in the gazebo restaurant, the coracle rides start.  While walking up to the river we saw many grizzled squirrels endemic to the Cauvery basin scurrying up the trees. 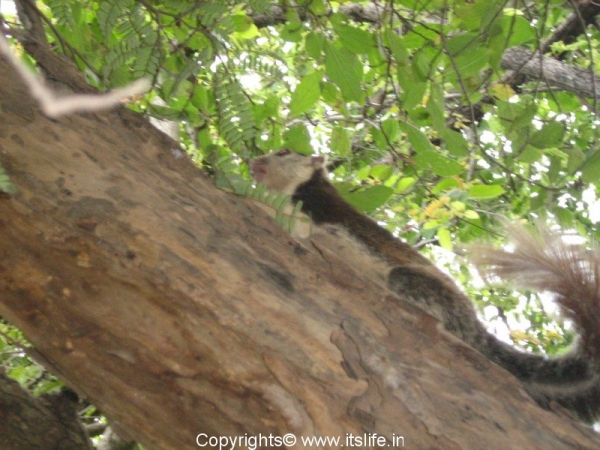 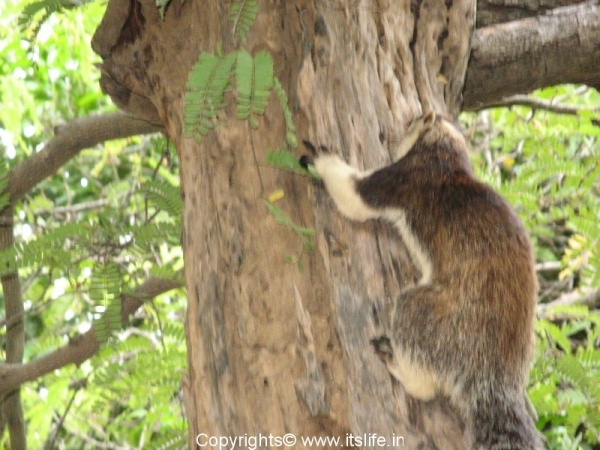 Wild plants with flowers were spread on the sandy river beach. 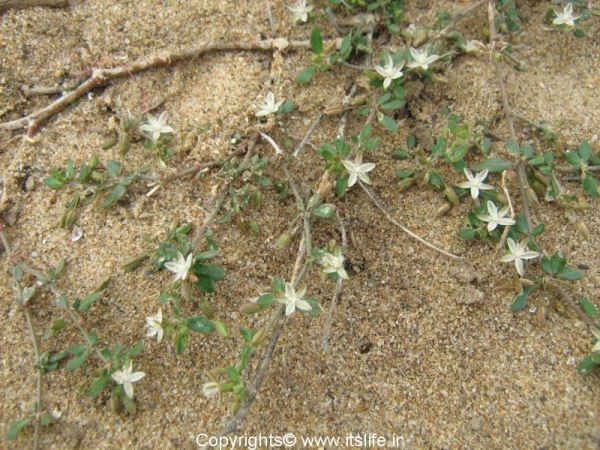 The coracle ride will give you glimpses of crocodiles either swimming or basking on rocks. 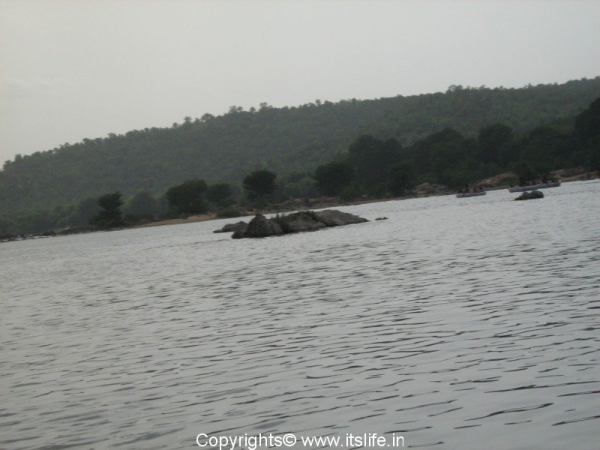 Picture11 – Coracle Ride
We saw many of these lying around with their mouth wide open displaying a forbidding set of teeth. 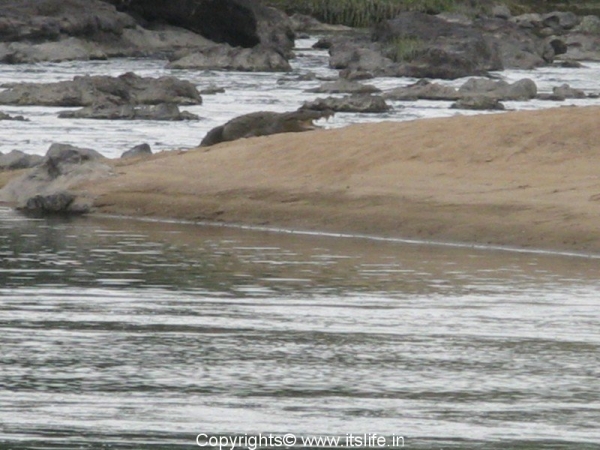 After the coracle ride, the other guests wandered back to the camp to play football, volleyball etc., but we stayed back and sat on the rocks with a crocodile for company a few rocks away.  We marveled at our bravery and thanked Steve Irwin of Animal Planet for educating us on the behavior of crocodiles. 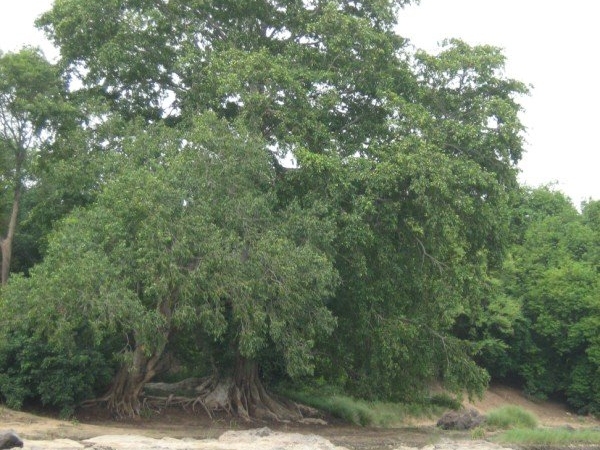 As we sat soaking in the silence and beauty of the place we heard elephants trumpeting from the opposite bank.  We sprang to our feet and 6 pairs of eyes scanned to catch a glimpse of the elephants but were greeted with silence interrupted by the gurgle of the river.  After about 15 minutes, we were treated to a wildlife encounter deserving a standing ovation! On the opposite bank was a herd of 20 or more elephants comprising of male, female and baby elephants walking towards the river.  They started drinking, spraying water on themselves and others and few started rolling in the water.  This spectacular show ended after 15 minutes as the leader lead them back into the forests trumpeting their exit.   The forest officials themselves were surprised and said we were lucky to have witnessed this, as it is very rare to come across such a big herd.  I only wished that we had more powerful cameras. 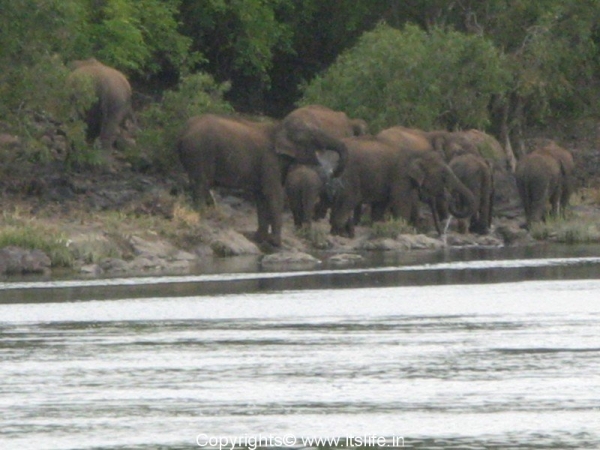 Picture14 – Elephants on a water spree

For fishing enthusiasts this place offers one of the finest gaming fish, which is the Mahseer or The Large Headed One.  The fishing season is from November to February.  The Mahseer can weigh more than 100 Kgs and is known to be a great fighter and impressed one of the best adventurers of all times Jim Corbett.  There are four types of Mahseer found in these waters; they are Silver, Gold, Black and Pink.  To protect these fishes, “catch and release” is practiced. A local guide called “Gillie” accompanies the anglers in a coracle to assist in catching and releasing the fish.  Fishing usually starts in the early morning until midday and again starts at 4 PM until dusk. 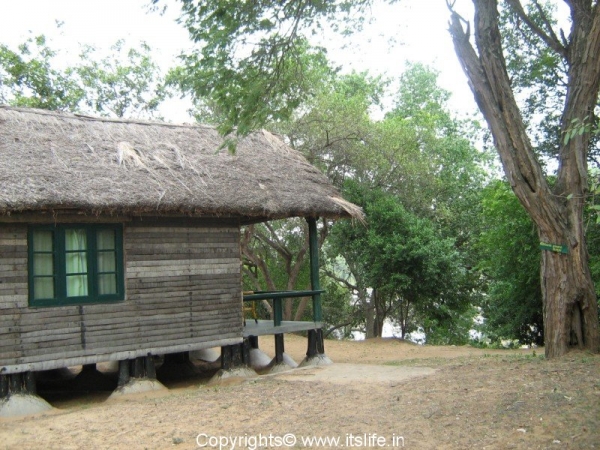 Nearby interesting places are Doddamakali, which is 8 Kms away and Galibore, which is 16 kms away from this place.  Both these places are similar to Bheemeswari but the experiences differ.

This was one of the most amazing trip I took which will be always etched in my memory. Sighting the elephants was exciting. Must see place for nature lovers like us.

Hey Kalyani,
Yes this was one of the best trips.
Cheers!
Shantha

Nandini, Thank you for visiting…

I am planning to go to bhemeshwari for a daylong trip.

Can you please mail me the contact details of any of the reasonably priced jungle lodges there.

Is prior booking absolutely required?

Jungle lodges is the one available there. Please access the following link for more details: http://www.junglelodges.com/

Yes, reservation is a must even for one day visit. Have a nice trip.
Regards,
Shantha

Hi,
Can any1 help me out in trying to know how to get there.
Tried all possible numbers but either its switched off or some problem.
Hw do u do prior booking to get in there.
We just wannna go in the mor and get back by evening