The meaning of the above shloka is as follows – Lord Krishna is partial with devotees who offer him the Tulasi leaf and a handful of water. 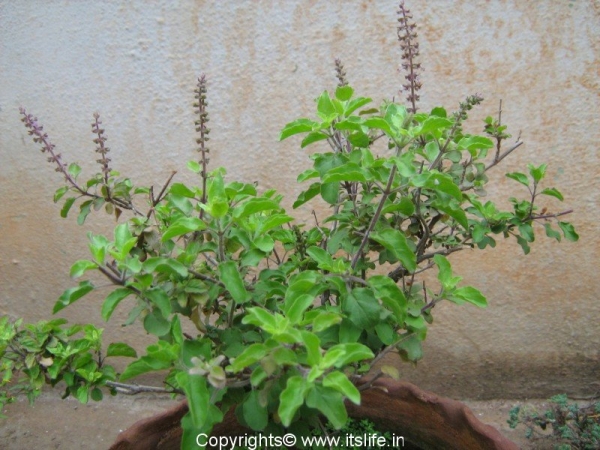 “Tulasi” the queen of herbs is also known as Holy Basil. Tulasi is planted in every Hindu household in a special container or a simple pot and worshipped daily. Some of them plant more than one Tulasi plant, which is called as Tulasi Vana / Tulasi forest. The plant belongs to the family Lamiaceae and the botanical name is Ocimum tenuiflorum or Ocimum Sanctum. 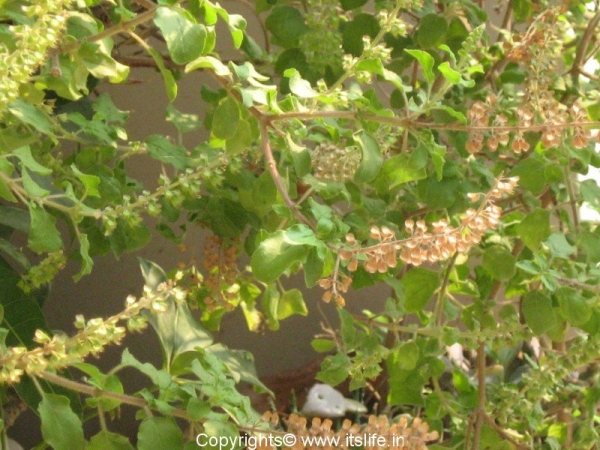 The plant can grow up to 4 feet tall. The stems are hairy with simple opposite green leaves. The leaves have an unmistakable aroma. Flowers are light purple and extremely tiny, which bloom on elongate racemes in close whorls. There are two types of Tulasi plants cultivated and they are Rama Tulasi, which has Green leaves and Krishna Tulasi, which has purple leaves.

Tulasi leaves are used in auspicious rituals and to worship god. Vedas mention that God does not accept any offering if it does not include Tulasi leaves. Puranas describes Tulsi as the consort of Lord Krishna. 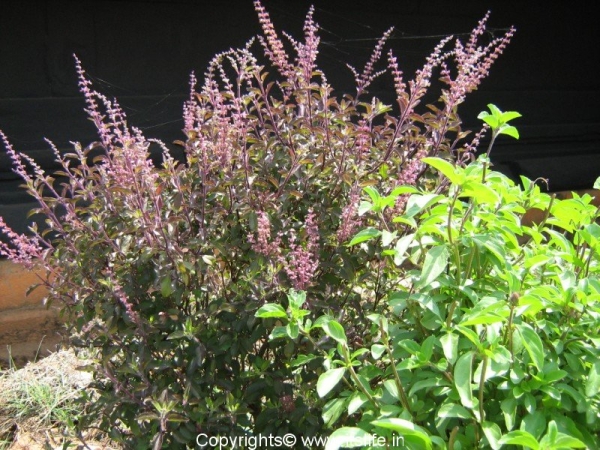 Tulasi can be grown throughout the world tropics and is cultivated for religious and medicinal purposes. It can be propagated through seeds or through saplings. It is used in Ayurveda to treat many ailments. Tulasi is used to prepare Kashaya / Herbal tea and it is used for cooking in Italian and Thai cuisine. 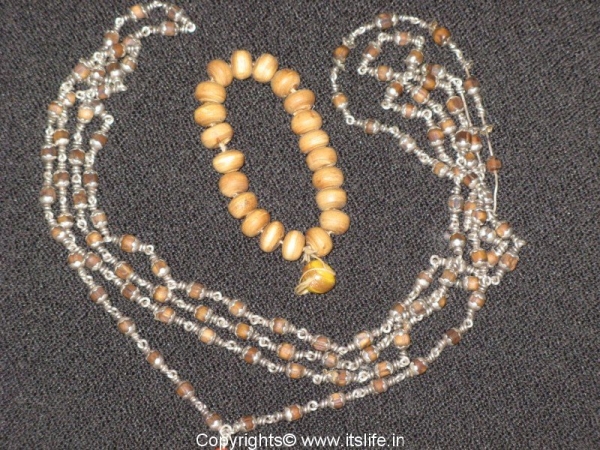 Japa malas / rosary beads made from Tulasi stems or roots are considered sacred. These beads are also worn as a necklace as it is considered auspicious for the wearer.

Tulasi is offered to Lord Ganesha during the 21 patra (leaves) pooja while chanting the below mantra: “Om Gajakarnaaya namaha, Tulasi Patram Samarpayaami” 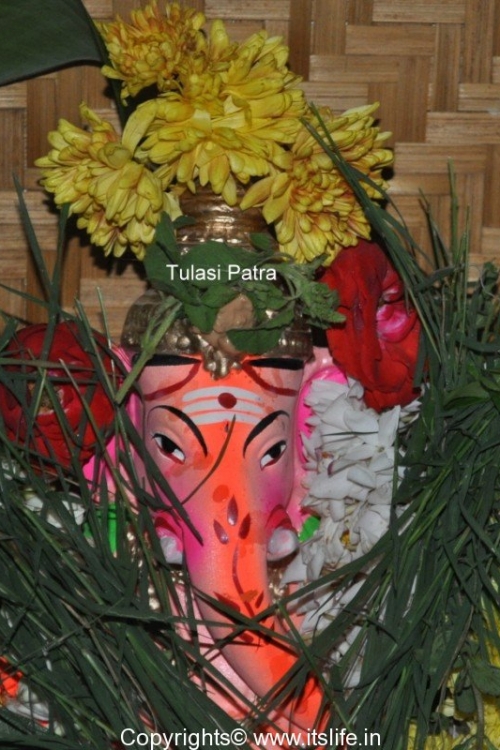 Medicinal Use:
In India Tulasi has been used in Ayurveda to treat many ailments since thousands of years. In this modern age, Tulsi extracts are used to treat simple ailments like common colds, headaches, stomach disorders and inflammation to more complex diseases like diabetes, blood pleasure and cholesterol. Because of its anti-bacterial properties, it is used in herbal cosmetics and to treat skin diseases.

The cure is possible using Tulasi because it contains hundreds of beneficial compounds known as phyto-chemicals. These phyto chemicals possess strong antioxidant, antibacterial, antiviral, adaptogenic, and immune-enhancing properties that promote general health and enhance the body’s immunity against stress and diseases.

Legend of Tulasi
The story of Tulasi is written in the Padma purana and in Brahma-vaivarta purana. King Kushadvaja had a daughter named Vrinda, who was married to Jalandara the demon king. Jalandhara accused Shiva of being a hypocrite as he was with a wife when he posed as an ascetic. This infuriated Shiva, but he could not kill Jalandhara as he was protected by his wife Vrinda’s virtue and chastity. Jalandhara became powerful due to this blanket of protection and committed many misdeeds; this worried the gods and goddesses. They approached Lord Vishnu to solve the situation.

Lord Vishnu took the form of Jaladhara and broke Vrinda’s chastity. Taking advantage of this situation the gods killed Jaladhara.

Vrinda was furious when she became aware of the reason of her husband’s death and cursed Lord Vishnu to turn into a stone. Lord Vishnu became the saligrama stone found in the Gandiki River. Goddess Lakshmi consort of Lord Vishnu was shocked at the curse and went to Vrida and requested her to take back her curse. Goddess Lakshmi, Parvathi and Saraswathi gave three seeds to Vrinda. Vrinda rolled back her curse and sowed these seeds. She entered her husband’s pyre and gives up her life. 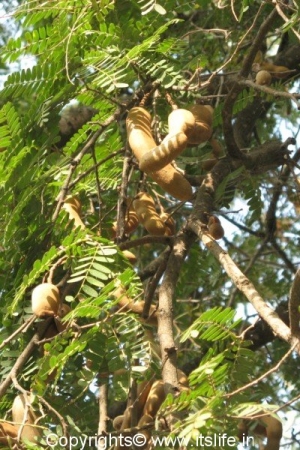 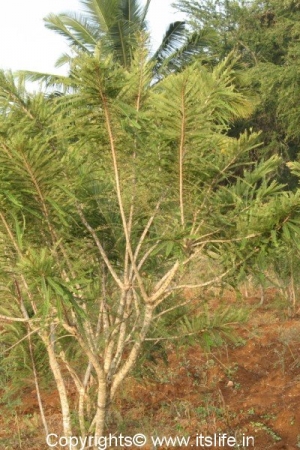 The three plants that grow from the three seeds are Tulasi, Tamarind and Indian Gooseberry. Lord Krishna was seen in the Tulasi plant; hence it is believed that Lord Krishna resides in the Tulasi plant. Lord Vishnu blessed Vrinda, that the plant Tulasi that grows would represent her and would be worshiped every day by one and all and this plant will be the most sacred and auspicious thing that can be offered to him.

Hence Tulasi is offered to Lord Vishnu and Krishna without fail during pooja / rituals.

Tulasi Festival
A festival dedicated to Tulasi is celebrated known as Uttandwadashi or Tulasi Vivah in India. This festival falls in the Hindu month of Karthika.  On this day, a branch of Indian Gooseberry and a branch of Tamarind tree is stuck next to the Tulasi plant and worshiped.

I require Tulsi stems for Mala making. Could you please inform me if it available ? You can contact me at
0 9880770558 and I am at Bangalore.