“Eat onions in March and garlic in May –
Then the rest of the year, your doctor can play”. This Old Rhyme sums up Garlic for Health. Although, Garlic is known for its distinct odor, the flavor produced by it is simply divine. 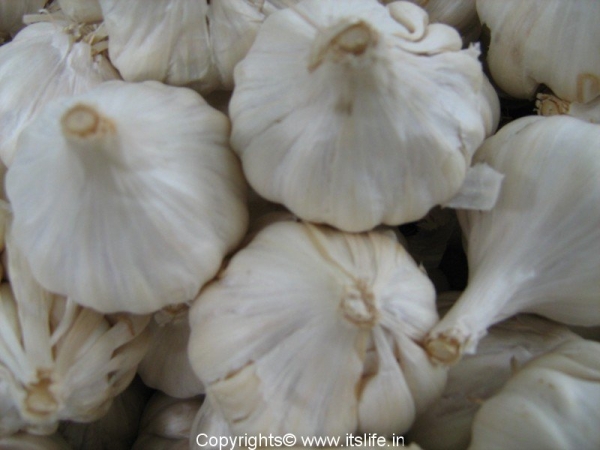 The botanical name Allium sativum belongs to the mother of all cures: Garlic. The name Garlic is of Anglo-Saxon origin, being derived from gar (a spear) and lac (a plant), in reference to the shape of its leaves. The leaves are long, narrow and flat, like grass. The bulb is the edible portion of the plant, which grows underground and is of a compound nature, consisting of a dozen or more discrete cloves.

Some of the types of Garlic, that are cultivated, are Crow Garlic, Ramsons and Field Garlic. Garlic was worshiped by the ancient Egyptians and largely consumed by the workers employed by King Khufu, who built the pyramids to keep them strong and healthy. The Greek Olympian athletes ate Garlic for stamina and the Lebanese used it widely in their cuisine. The Roman soldiers, sailors and rural classes also consumed Garlic. Alexander Neckam a writer of the 12th Century recommends it as a palliative of the heat from the sun for the field laborers. It was believed that a Garlic clove worn on one’s person would ward off any evil and keep the vampires at bay.

When Garlic is crushed, chewed or finely chopped, enzymes stored in its cells trigger the breakdown of several sulfur-containing compounds stored in the cell fluids. This is responsible for the sharp taste and strong odor of Garlic. It yields allicin, a powerful antibiotic and anti-fungal compound phytoncide. Garlic also contains alliin, ajoene, enzymes, vitamin B, minerals and flavonoids.  Thus, Garlic for Health is the mantra of Doctors.

The compound Allicin is responsible for the healing powers of Garlic. Consuming Garlic has shown significant reduction of cholesterol, triglycerides and low-density lipoproteitn (LDL) cholesterol, lower blood pressure, stimulate the release of bile from the gall bladder and also used in the treatment for intestinal worms.

Its antiseptic properties have made it popular in the usage for skin care: athlete’s foot, acne and skin infections. Place a freshly crushed garlic clove in a piece of cotton gauze and rub it over the affected areas. In the war it was widely used to treat wounds and thousands of men have been saved. It is also pounded and employed as a poultice for scrofulous sores.

Garlic is a good expectorant and helps in colds. Syrup of Garlic is an invaluable medicine for asthma, hoarseness, coughs, and inflammation of the throat, chronic bronchitis, difficulty of breathing, and most other disorders of the lungs. To prepare the syrup boil cloves of Garlic in water and let it stand for 12 hours. Add Sugar and boil to a syrup consistency and let it cool. Add Vinegar and mix well and store in bottles.

To get relief from earache due to cold, crush garlic and wrap it firmly in little cotton wool and place it in the outer ear.

Garlic is a healthy antioxidant which helps to protect the body against pre-mature aging.

For acidity consume 7 – 9 cloves of garlic throughout the day, either with milk or crush and mix with butter and use as a spread. It works as a stomach relaxant and keep the acids calmed down. Crushed Garlic mixed with lard, has been proved to relieve whooping cough if rubbed on the chest and between the shoulder blades.

If after every meal, Garlic is consumed it has been considered a good effect in cases of epilepsy.

A clove or two of Garlic, pounded with honey and taken two or three nights successively, is good for rheumatism.

If the smell of garlic is repulsive then Garlic supplements in the form of pill or capsule can be taken. But, make sure that one pill supplies at least 4000 milligrams of Allicin, which is the amount of Allicin provided by one fresh garlic clove. A supplement that gives you 400 to 600 milligrams of garlic per day will help combat colds and flu.

From ancient days Garlic has been used as an important ingredient in a variety of cuisine. It is either cooked or used raw for its strong flavor, which is considered to enhance many other flavors. It is often combined with Onion, Tomato or Ginger. The outer skin has to be removed from each of its cloves before using. An easy way to remove skin is to microwave garlic pods for three seconds and the cloves will pop out of their skins in no time.

Because of the presence of strong smelling sulfur compounds in Garlic, eating it results in “Garlic Breath”. Due to its strong odor, Garlic is often called the “glorious stinking rose”.

Garlic bulbs are best preserved hung in a dry, dark corner of a room.

The annual Gilroy Garlic Festival is held to celebrate the palate-pleasing herb in the month of July in the USA.

Hence, enjoy Garlic for its taste and its cure-all property.