In Kannada, Cashew is known as Godambi or Geru beeja, Agnikrita in Sanskrit, Kaju in Hindi, Mundiri in Tamil, Kasu mavu in Malyalam. Botanical name is Anacardium occidentale and belongs to Anacardiaceae (Cashew) family.

Cashew tree is native to northeastern Brazil and the tree is called as Cajueiro and the fruit is called Caju.

Now, this tree is grown in all tropical countries for the delicious nuts. The Portuguese bought this tree to Goa and I have seen huge land covered with these trees in the coastal regions of South India. From India it spread to the rest of the world. India is the highest producers of Cashew nuts closely followed by Ivory Coast, West Africa. 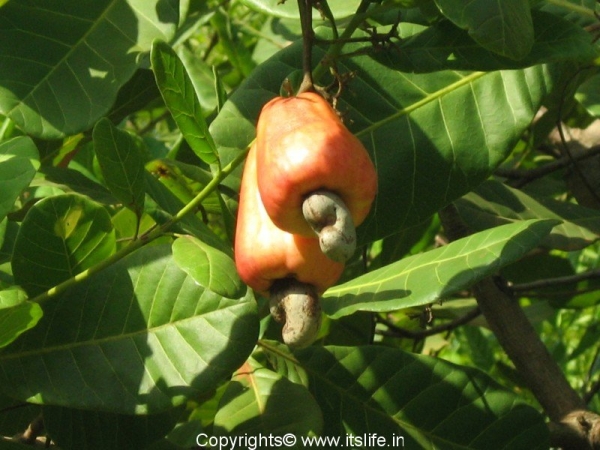 The tree is evergreen and grows to a height of 10 to 12 meters. The trunk is short and uneven shape. The largest Cashew tree in the world covers an area around 81,000 sq ft and is located in Natal, Rio Grande do Norte, Brazil. 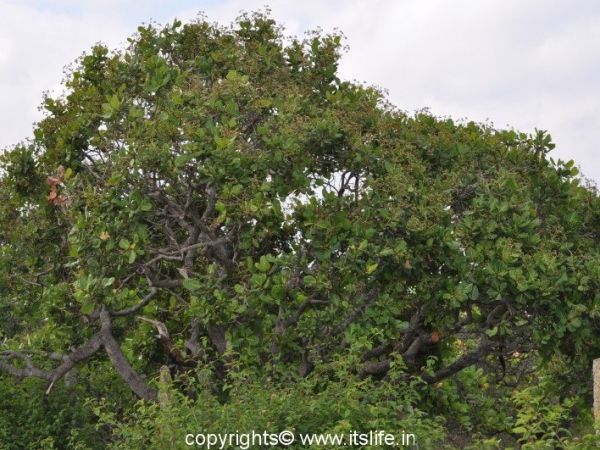 The leaves are green, thick and arranged spirally. They are 4 to 22 cm long and 2 to 15 cm broad with a prominent margin. 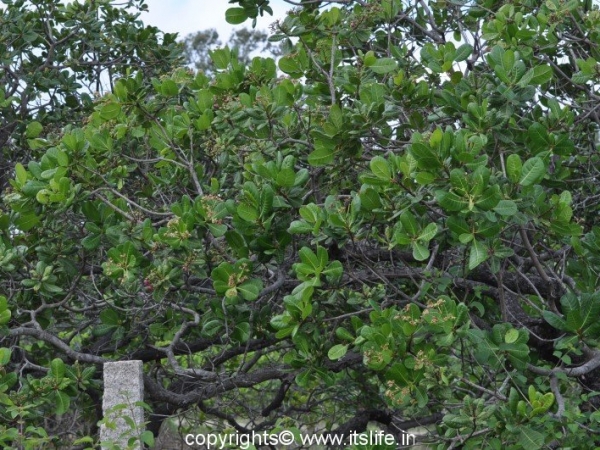 The flowers bloom on a spike, which is 26 cm log. Flowers are small, pale green when immature and turn red as they mature. They have 5 petals about 7 to 15 mm long. 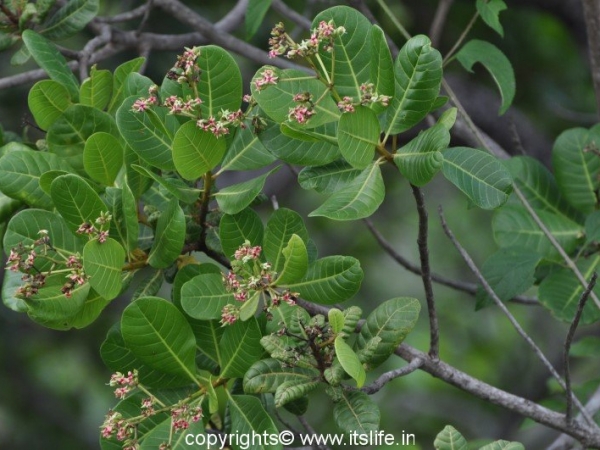 The pseudo fruit is known as Cashew Apple and is pear-shaped and is in shades of yellow, red, and orange. This is 5–11 cm long. Though the fruit is edible, it must be eaten in a certain way. 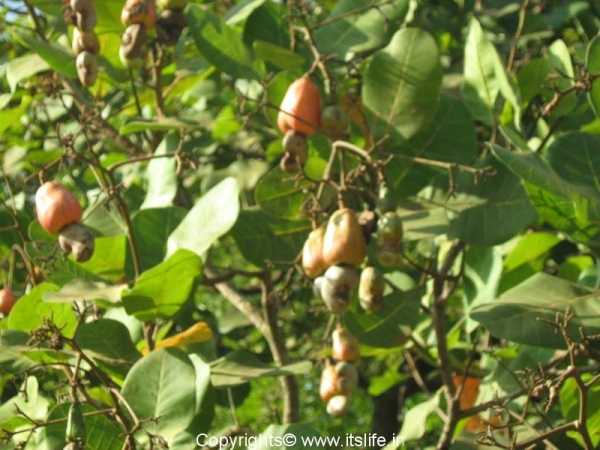 The flesh of the fruit should not be chewed and swallowed. You should just bite into the fruit and suck the juice.

The actual fruit is the kidney-shaped drupe that grows at the end of the colorful fruit. Within this is the seed known as Cashew nut. The seed is covered in two shells. The shells are removed in the processing units before being sold in the markets. 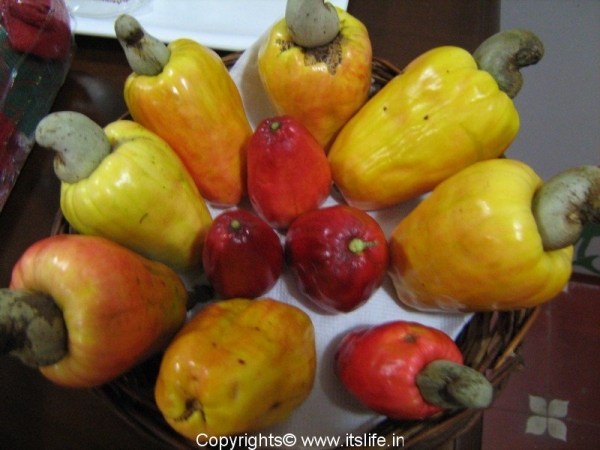 Length of the Cashew nut is 1 inch and 0.5-inch thickness at one end. 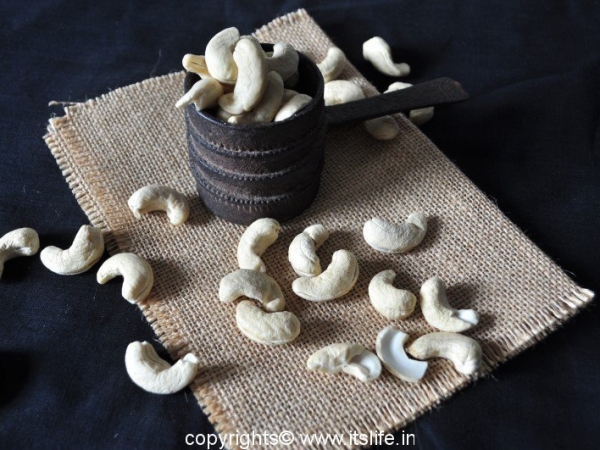 It is cream in color, smooth, shiny, and splits into two halves from the middle. Cashew nuts have crunchy, buttery texture with a pleasant sweet fruity aroma. 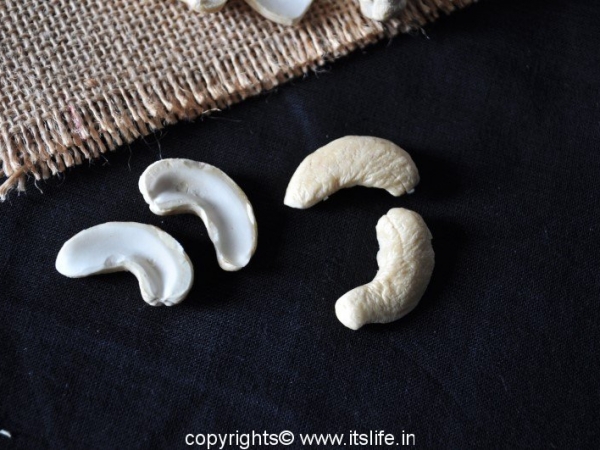 Juice is extracted from the pseudo fruit and it is also cooked and made into desserts.

The nut is eaten raw or roasted. It is used in Indian cuisine to cook gravies and make sweets known as Kaju katli. The nut is also used to cook side dishes along with other vegetables. The nut is roasted in Ghee and added to puddings. 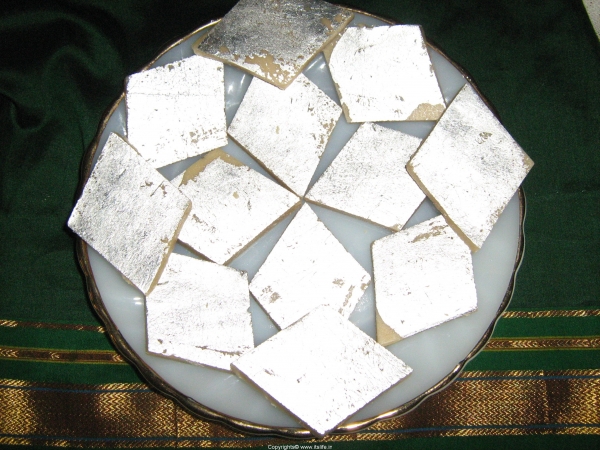 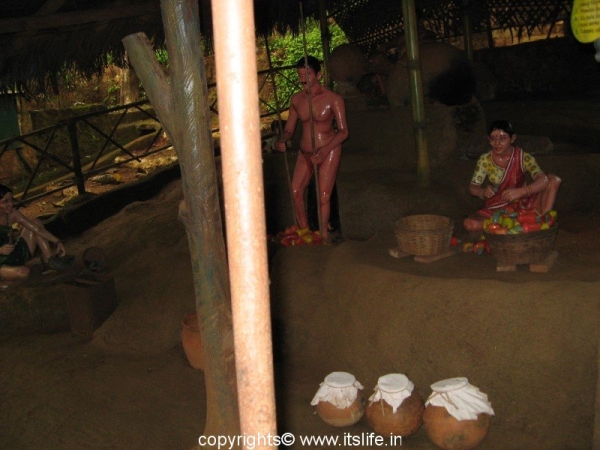 An oil is extracted from the Cashew nut shell and this is used in traditional medicine as an antioxidant.

The discarded cashew nuts unfit for human consumption, alongside the residues of oil extraction from cashew kernels, can be used to feed livestock.

Cashew nuts are rich in energy, antioxidants, minerals, and vitamins.

Recipe with Cashew as main ingredient: