Re-potting of plants becomes essential when the plant outgrows the pot that it was growing in.  The pots that needs to be re-potted can be identified by observing the following:

It is always good to re-pot during the growing season that is just on the onset of the rainy season or during the rainy season.  Avoid re-potting during winter, which is the resting season for plants.  Always choose a pot, which is bigger than the one that the plant was formerly potted in.  Remove the plant from the old pot carefully and shake off the excess mud stuck to the roots.  Follow the steps below for re-potting. 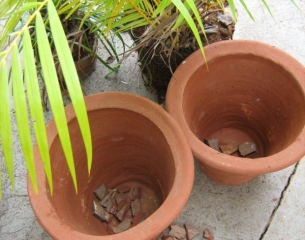 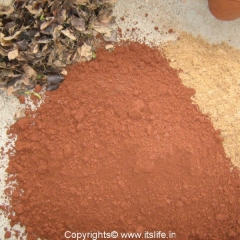 Method:
In the new pot arrange pot pieces near the drainage hole as shown in Picture1. 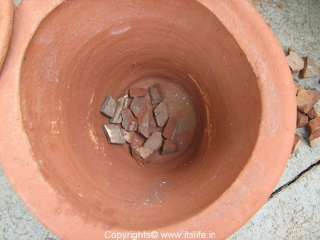 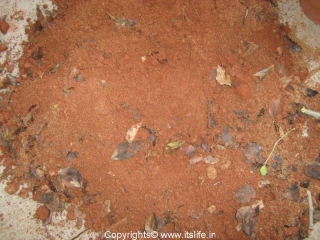 Fill half of the pot with the mud mixture as shown in Picture3. 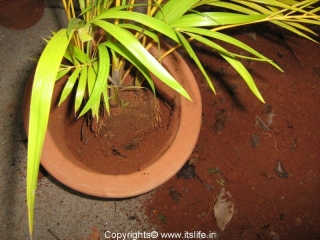 Keep the plant over the mixture and fill the pot leaving one inch space from the rim of the pot as shown in Picutre4. 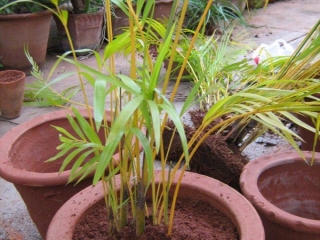 Press the mud firmly using both the hands near the plant.  Water the plant and keep it in shade for a day or two and then move it to the appropriate place.

Absolutely Love all the info on your blog, and I envy your garden. Thanks for all the wonderful posts……
Regards,
Roopa

Great article bout re-potting plants, but theres a harm on doing this thing, you must be very careful not to harm the roots of every plant.

and can we grow aloevera and doddapattre in pots?

Yes Nagashree, you can grow aloevera and doddapathre in pots.
Regards,
Shantha

Shantha, I couldnt find kempu mannu near by my home, so used soil that was digged in an empty site that wasnt red mud or kemmannu for growing daasavala, mallige etc.