The meaning of this Sanskrit dhyana shloka/meditation chanting is as follows:
I bow to Lord Vishnu, who is full of peace, who sleeps on a snake, a lotus sprouts from his naval, who is the king of gods, the one who is the earth itself, whose skin color is that of the condensed cloud, one who wishes good for the people, who is the consort of goddess Lakshmi, who is seen by the yogis through their senses, I bow to you Lord Vishnu, the one who drives away the fear of life and the one who rules the world. 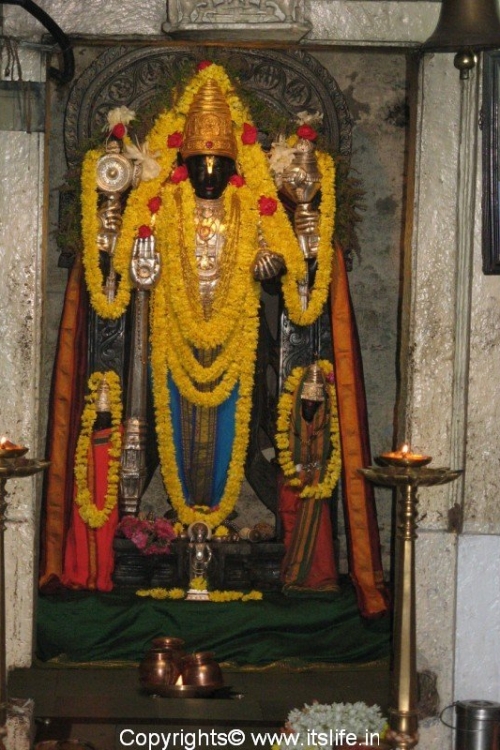 Our house was bang opposite a Srinivasa/Vishnu temple.  The temple reverberated with preparations to celebrate Vaikunta Ekadashi days before the festival. Decorations, serial lights, pendal/marquee, carpets, fountains and all the other paraphernalia would be put up in place.  On the break of dawn devotees in hundreds would be in the queue to have a darshan/ of the lord and to pass through the beautifully decorated Vaikunta dwara/Heaven door.  Vishnusahasranama/1000 names of Vishnu chanted by the famous carnatic singer Smt. M.S.Subbalakshmi would envelop the environs from the speakers. 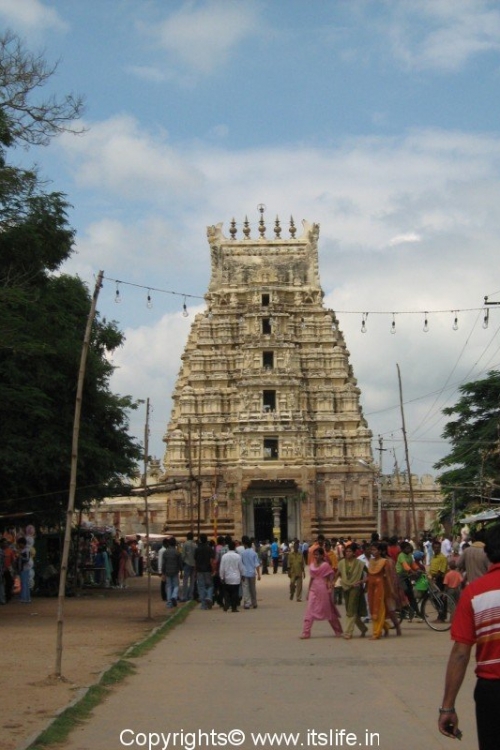 Ekadashi is the 11th lunar day of a fortnight in the Hindu month.  Vaikunta Ekadashi falls in the Hindu month or Margashira, which is around December-January according to Gregorian calendar.  This year (2015) it is on 21st December.  Hindus believe that on this day the “Vaikunta Dwara”/Heaven gates are opened.

People fast on this auspicious day, as it is believed to be equivalent to fasting on the remaining 23 Ekadasis that occur in a Hindu year.  Special prayers and elaborate rituals are performed in all the Vishnu temples in the world.

Legend Associated with Vaikunta Ekadasi
Lord Vishnu pardoned two wicked demons and opened the gate of “Vaikunta”/Heaven for them.  The demons asked for a boon from the lord that who ever listens to their story on this day and those who pass through the Vaikunta Dwara will find a berth in Vaikunta/Heaven.

In the great epic Mahabharatha the githopadesh/knowledge imparted by Krishna to Arjuna happened on Vaikunta Ekadasi day.

Celebrations in ancient temple of India
The three important Vishnu temples on the banks of river Cauvery i.e., Adi Ranga (Srirangapatna), Madhya Ranga (Shivanasamudra) and Anthya Ranga (Srirangam) celebrate the festival grandly.  The three idols are in the sleeping posture.  In Srirangam, the celebrations last for 21 days and the lord is bedecked with diamonds armour.  These jewels are bought from the northern gate known as “Paramapada Vasal”, which is opened only on this auspicious day.  In Tirupathi Thirumala temple, the celebrations are prominent and thousands of devotees make a beeline to the pilgrimage center on this day.

You’ve got an interesting site out there, Shantha. Glad that the sign-off is a writer from Bangalore.

Mr. Sharath,
Thanks for the encouraging words.
Regards,
Shantha

I am Sridhar
I maintain lot of religious website.

I want a copy of the Gadags Veeranarayana perumal , can you spare me one. I have taken the pic of other 4 Narayana prumal which our Acharya Ramanuja did ponar parthistai.

Hi Sridhar,
It is nice to know about your web project. I have mailed you the picture to your email id.
With Best Wishes,
Shantha

I visit your webpage itslife and the recipes tried some of your recipes also. It’s a great contribution from your side.

Have a query. Would like to know whether we can bake cakes and biscuits in microwave without convection. I have a Sanyo Microwave with Grill option. Can you please tell me which are the recipes I can make in this.

Thanks for visiting. I am so sorry, but I have’nt yet bought a microwave oven even though I use it at office to heat the food I carry from home. I have a Oven Toaster Griller (OTG), which I used extensively for Grilling, Baking, Toasting etc.,

When I buy a microwave oven I would like to start a category on Microwave cooking and hope it is soon!

Thanks for leaving the note Vibha. Happy Diwali.

Please check the link below:
http://www.itslife.in/travel/gadugina-veeranarayana-temple