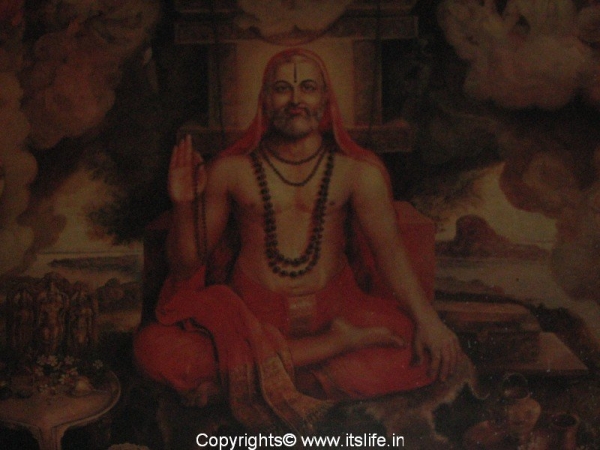 O divine Sri Raghavendra Swamy I salute you – the one who is the follower of true dharma and I chant the name of Kalpavriksha (the tree, which grants boons) and bow to Kamadhenu / Cow.

Sri Raghavendra Swamy lived in the 16th century (1595-1671).  He is one of the most popular of all Hindu saints who is eulogized as the most compassionate saint who fulfills all wishes like the Kalpavriksha and Cow Kamadhenu .  He was an ardent follower of dvaita principle promoted by Madhwacharya.  He is believed to be the reincarnation of Prahalada.  Prahalada was a great devotee of Vishnu who was saved by Lord Narasimha / incarnation of Vishnu from his notorious father Hiranyakashapu.  Sri Raghavendra Swamy was a devotee of Sri Rama and Sri Panchamukha Mukhya Prana Devaru / five faced Hanuman.  Affectionately people mention Sri Raghavendra Swamy as Guru Rajaru or Rayaru and the mutta is known as Rayara Mutta. 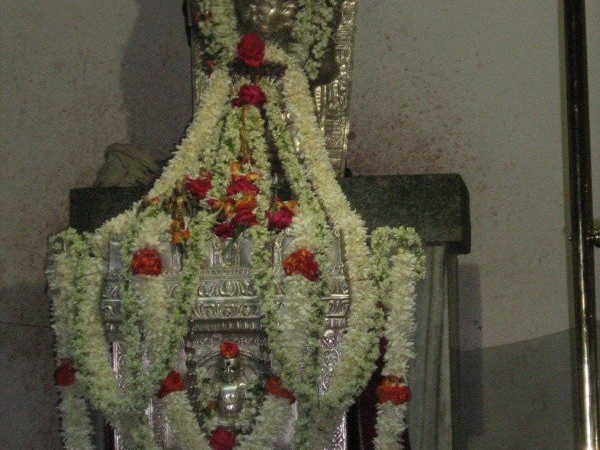 The day he entered samadhi at Mantralaya in Andhra Pradesh is celebrated in the Mathas all over the world as Sri Raghavendra Swamy Aradhane.  The Brindavana / sacred tomb is preserved in Mantralaya.  Aradhane is celebrated for three days and it falls during the Hindu month of Shravana, July – August according to Gregorian calendar.  The three days are known as Poorva Aradhana, Madhya Aradhana, and Utthara Aradhana, which is the day when Raghavendra Swamy’s last speech before he entered the Brindavana is remembered. 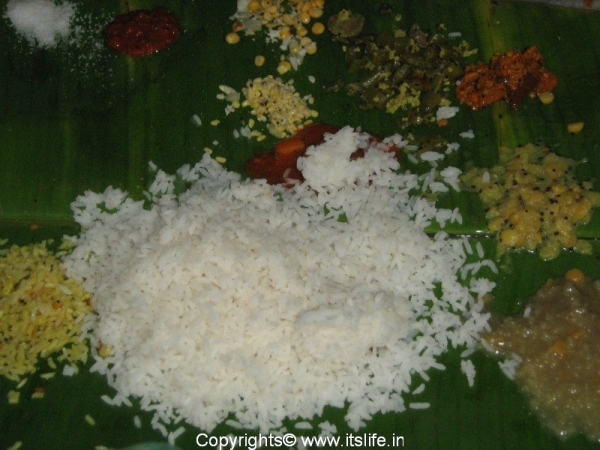 On this day special pooja like Rathothsava / procession in a car; Kanakabhishekha / showering of gold coins on the idol are performed and delectable Madhwa dishes like Anna, Kootu, Uppinakayi, Saaru, Gojju, Palya, Tovve, Kosambari, Chitranna, Payasa, Hayagreeva, Boondi Laadu, Khara Boondi, Ambode and sometimes Mysore Pak and Annada Kesaribhath are offered as Naivedya / blessed food.  All the devotees are served this mathada oota / meals served in the matha.  Special alankara / decorations are done on this day.    People throng the matha on this day to receive blessings from Rayaru.  On this day Shri Raghavendra Ashtotra (108) Shathanamavali is chanted and many more vedas and shlokas are recited.  In the evening discourses will be arranged on puranas / tales of gods and goddesses and sometimes music programs will be organized.

Good information on Sri Guru Raghavendra. I am a strong devotee of Raghavendra swamy and do social(bhakthi) networking

I happened to visit Mantralaya after many years, wish I can do it on aradhane also some year..

Thanks for the information..
i am a very religious man … in trust in god .

Came across your blog/website by chance. I find your work and your efforts inspiring. Who are you? and what do you do?
I have bookmarked your website. It’s helpful because I do Mangala Gowri Puja. Loved the pictures that you have posted.

Keep up the good work.

Thanks dear Preeti, I am so glad that the content here is helpful to you. I am another ordinary Indian woman living in Bangalore who enjoys juggling many things in life.
Keep visiting,
Shantha

Thank you for sharing the stories and the significance of the different Gods and saints and all the food too that goes with the celebrations. having grown up in Bangalore and now living abroad , my parents always told me the the stories about these and I always wanted a scientific reason for all the stories/ songs/ prayers and food. Nice full circle.

If, by any chance, you find the meditating posture of Guru Raghavendra swamy kindly post the same.. I found it in mantralaya… I am searching for that everywhere… I want to make a frame out of that and keep it….

who will forget mathada uta, one of the tastiest in this world ( as it comes from rayar ashirvad).

Thank you for your encouraging words.

Hope everything is fine with the blessings of guru rayaru…Thanks for the good information abt aradhane and also sharing about the significance ,celebrations in detail.
I had posted queries but no response from you recently.I asked some queries in shukravara pooja. pl share your answers.

Normally during Swamji’s aradhane time, me with family members visit, Raghavendra Swamy Temple at Honnali, where the aradhana mahotsava will be celebrated in a grand manner with holy touch. Kindly make your self convenient to attend the function.

Hi Gurudatta.G.S.,
Thanks for bringing to the notice about the temple at Honnali.
Hope you have a divine experience this time too.
Regards…