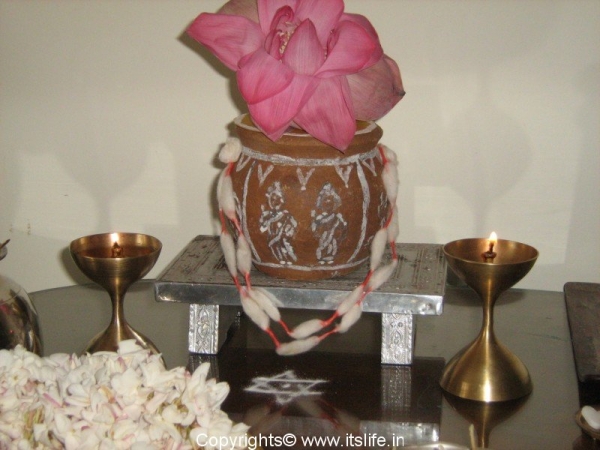 Shravana Shukravara Pooja is also known as Sampath Shukravara vratha.  This is performed in the Hindu month of Shravana, July – August in Gregorian calendar dedicated to Goddess Lakshmi / Gowri.  This pooja / vratha / religious observance is performed on all the Fridays of Shravana.  For the pooja dates click here.

On this day women are supposed to take an oil head bath early in the morning.   Divide a mud or copper or silver pot into five pots and in each segment draw Shanka / Conch shell, Chakra / Disc, two Goddess Lakshmi / Gowri, Cow and Calf, Elephant as shown in the picture below. 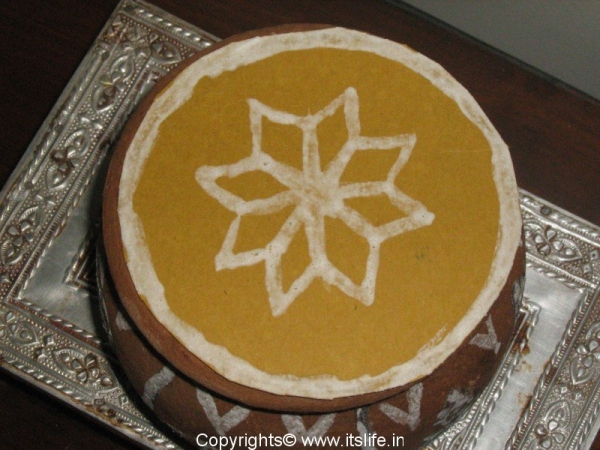 This is known as Sampath Gowri Gadige.  Put Rice, Dry Date, Turmeric Root, and Betel Nut inside the pot and place it in the shrine. 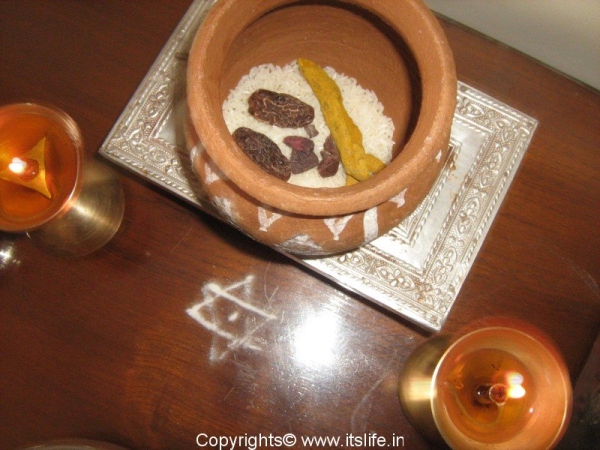 Perform Thambittu aarathi or Hooranada / lentil dough aarathi singing songs.  Shape into 5 small cups using the hoorana and keep a wick inside each cup and light it up. 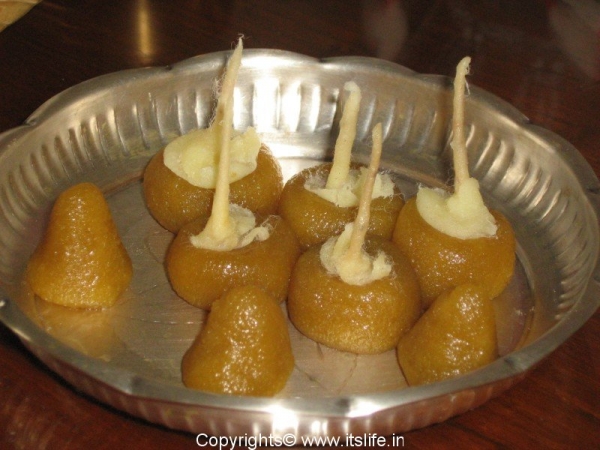 Invite a married woman home and serve her with festival food and just before she leaves give Mangala drowya and a Sampath Gowri pot. 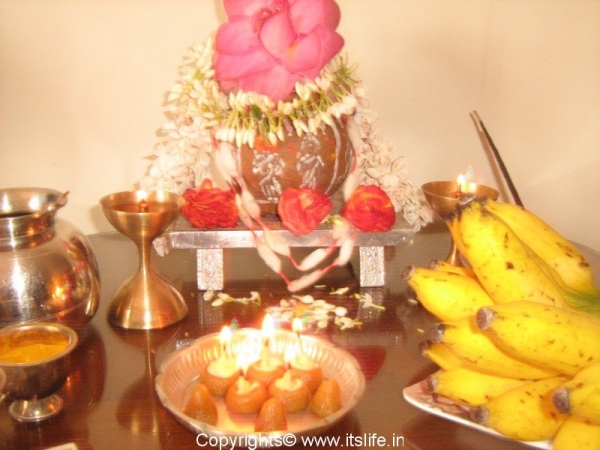 There is a story behind this vratha too and it is sung in the form of a song.  Once upon a time in a distant land lived a poor Brahmin, his wife, 4 sons and 4 daughters-in-law.    One day when he had gone out for begging he sees a grand celebration in a house.  He enquires about the celebration and they inform him that they were performing the Sampath Gowri  vratha and went on to explain how the vratha was being performed.  They gave him the Sampath Gowri pot along with alms.  On the way back home, due to the Sampath Gowri pot in his hands, people voluntarily called him home to give alms.  He was delighted and narrated everything that happened to his wife. 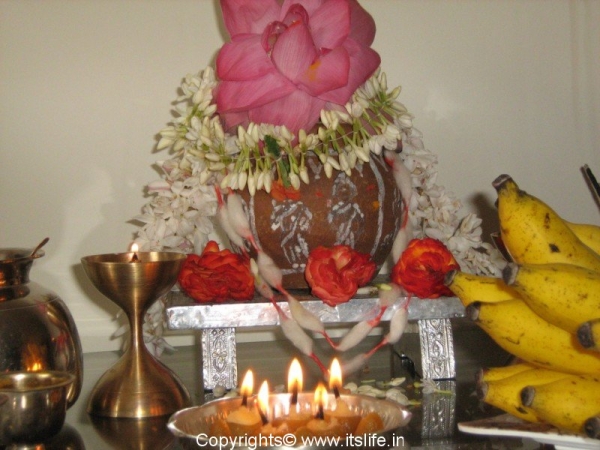 Immediately the Brahmin’s wife along with her daugters-in-law arranged a pedestal and installed Sampth Gowri and prepared naivedya / blessed food.  She sent her youngest daughter-in-law to invite a married woman home.  As she stepped out of home to invite with Kumkum / Vermilion colored powder and Oil, she saw a glowing married woman who approached her and said that she would come over for the pooja celebration and she took the Kumkum and applied on her forehead.  At home all of them waited for the lady till evening, but she does not turn up.  The same event happened to all the other three dautghters-in-law in the next three weeks.  The mother-in-law was frustrated and went out to invite and was met by the same woman and she accepted the invite voluntarily.  She informed that she will come in the evening.  Mother-in-law agreed and decorated the house with thorana / mango leaf festoons, and everyone took an early morning oil head bath and dressed themselves with Arishina / Turmeric Powder, Kumkum / Vermilion colored powder, bangles and flowers.  They prepared Holige, Payasa, Ambode and offered to the goddess and performed the pooja with many types of flowers and wait for the woman.

Suddenly, an illusion was experienced by the family members, it was as though light was entering into the darkness and in the background the sound of the anklets “Jhal Jhal” was heard.  A beautiful woman fully decked up with jewelry and flowers entered the room.  It was not an illusion but it was Goddess Lakshmi herself!   The couples are stunned and pray and take her blessings.  Wherever the goddess turned and looked treasure filled up the place and the family was endowed with wealth and prosperity.

What an excellent website! Great material put together…Please do keep up the good work.

This was my dream website and I am happy I stumbled accross it.

Thank You so much.
Rekha.

Dear Rekha,
I am so happy you liked the content here. Keep visiting and drop in lines of feedback to improve the content.
Regards,
Shantha

Its really a nice post, was wondering if u could also post the “SAMPATH SHUKRAVARADA HADU”….. it will really be helpful…

Once I get the lyrics, I will definitely post it.
Thanks for visiting,
Shantha

please paste sravana shukravara katha and sampath shukaravara and shanivara hadu in telugu script , and some more lakshmi and gowri arthi songs. Why I am asking you means my mother-in-law unexceptedly expired recently till now she only doing every thing what ever required for pooja but now we are finding the book of this pooja so kindly do favour for me. Once again thanks to you. Thankyou for reading my wish I think you fullfill my request.

Hi Neeraja,
I am sorry to hear about your mother-in-law.

I am sorry but I cannot fulfill your wish as I am not aware of Telugu script.

Hello Shantha,
Thank u very much for providing information regarding the shukravara puje. I am also searching for some website which I can get more info. You have written in detail abt the pooja. One doubt we have to keep mud pots seperately or can we keep one kalasha for all the fridays. Pl clear the doubt at the earliest. please post other good info.

Pl share all the rangolis which we can put before the god on all festival days and also tell important rangolis to put infront of god daily.

Hi Sudha,
Glad you liked the post. You can keep the same pot every Friday.

I will try to post most rangolis.
Regards,
Shantha

Thank you for your reply. I heard that this kalasha should be kept till the swarna gowri /jeshta devi pooja and make visarjan of both on the next day of pooja .. I am in confusion…pl anything give in detail…

The information regarding pooja vidhana about all the festivals has been given here is appreciated. I have searched in the festival blog regarding the puje will be done in magha masa pournima..(called as bharata hunnimi). Pl Shantha enanna info idre pl puje information tilisiri.

Hi Sudhabatni,
Thanks for visiting.
I have not yet researched on Bharata hunnime.
Regards,
Shantha

Thanks Shantha for the reply

Good.. Learnt how to do pooja on sampath shukravara pooja.. Tnk u

ellora
Reply to  The Untourists

What is done with the pot after Saturday? Is it reused the next week?

Wow was waiting for this story in English . We narrate this story during Yelashtami which comes during Ganesh 10 day festival. TQ .

I am very happy to hear your feedback.

You are most welcome, Padmavati.

Yes, it is reused the next week.

Glad you could find what you wanted. Happy festival season!

Hi. I wish to do Lakshmi Pooja from tomorrow… Anyone please guide me

Namaste madam very good information Thankyou so much
We are basically from shared of North Karnataka and currently we are staying in Bangalore
Every year we are performing puja of sharavana gowri with mud chattige
But this year due to covid 19 we are unable to go shared
Could you please help us with information where we will find mud chattige in Bangalore it will be of great help Thankyou
My contact : 9008772878

My mother says, you can use Copper bindige. You can try buying online too.
Hope you get something of your choice.