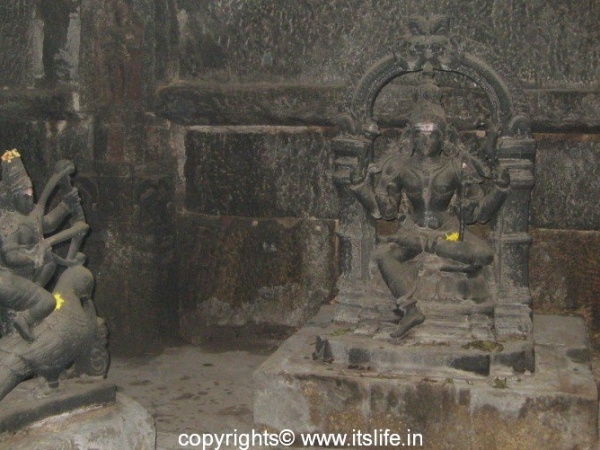 The story behind Kamadahana is as follows:
Dakshayini (Goddess Parvathi) gets married to Lord Shiva without her father King Dakshabrahma’s approval. King Dakshabrahma invites all his children except Dakshayini for a Yagna (fire ritual). Though Lord Shiva advices his wife Dakshayini not to attend the function, Dakshayini yearning for her parents’, attends the Yagna. Dakshabrahma shows disrespect to her and Dakshayini unable to bear the shame leaps into the yagna kunda (fire place) and gives up her life.

The same Dakhsayini is re-born as Uma to Himvad Parvatha Raja and Menaka. She grows up to be a beautiful girl. Sage Narada happens to visit Himvad Parvatha Raja and when he sees Uma he predicts that one day she will be the wife of Lord Shiva. Sage Narada also advises the Raja to send her to the place where Lord Shiva was in deep penance to serve and worship him. The Raja immediately accompanies Uma and her friends to Lord Shiva and after getting his permission, leaves the ladies to his services.

Demon Tarakasura after defeating the gods heads towards the heaven for a coup. The King of heaven Indra and the other gods get insecure and rush to the god of creation Brahma for a solution. As Lord Brahma had given the boon to Tarakasura and made him powerful, he was unable to help Indra. But, Lord Brahma tells them that if Lord Shiva who is in deep penance gets married to Uma, then the child born out of the wedlock would kill Tarakasura. Lord Brahma asks the Devas / Gods to apprise this to Lord Shiva.

Lord Indra concludes that the best person to tackle this task would be Manmatha / Kama. Lord Indra meditates Manmatha and immediately Manmatha appears before him.

Lord Indra tells Manmatha that the time has come for him to save the gods, but the task is going to be very difficult as the task is to bring back Lord Shiva who is in a deep penance to family life. Lord Indra asks Manmatha to take along his wife Rati and friend Vasantha (spring season). Manmatha, along with Rati and Vasantha take bows made of Sugarcane and arrows made of flowers and head towards the place of penance. Vasantha leads the group and wherever Vasantha enters, winter ends and new leaves appear on Mango trees, fragrant flowers bloom, Bees buzz happily, and Koel sings. In this setting, as usual, Uma takes fragrant flowers to worship Lord Shiva. With permission granted from Nandi (vehicle of Lord Shiva) who is standing guards, goes inside the place of penance.

Thinking that this was the right moment, Manmatha barges inside along with Rati and God of forests. Manmatha with fear sees that Lord Shiva is sitting on a Deodar Tree seat, wearing animal skin, sitting in a Veerasana (heroic pose), and in deep penance. God of forests encourages Manmatha and he hits Lord Shiva’s heart with the flower arrow. This provokes Lord Shiva and opens his third eye to reduce Manmatha to ashes in a second.

Rati is filled with sorrow and decides to give up her life by jumping into the fire. As she is heading towards the fire, Lord Brahma tells her not to give up her life, as on the day Uma and Maheshwara (Lord Shiva) get married, Manmatha will be re-born and will live forever on this earth without a form.

Thanks for visiting. You might more information in Purana books.Regards,Shantha