The above shloka/chanting is all about the three avatars/incarnations of Sri Madhwacharya.  Vayuputra/Son of wind god Hanuman in Ramayana was the first avatar, Bheema, one among the gallant Pandavas/five brothers of Mahabharata was the second avatar and the third avatar was that of Madhwacharya who served Sri Vedavyasa. 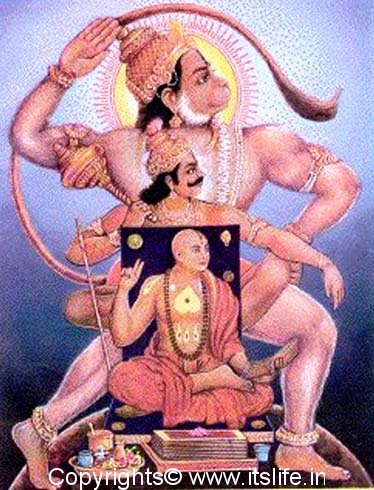 Madhwa Navami falls in the Hindu month of Magh, January – February in the Gregorian calendar. For the festival date click here. The day is celebrated as “Prayana”/Journey commemorating the journey of the great Indian saint and philosopher Sri Madhwacharya who left for Badrinath in 1317 A.D. to join his teacher Sri Vedavyasa never to return.  He is still believed to be living there with Sri Vedavyasa.

In Badrinath drive up to Mana village, which is the last Indian village on the India-China border.  A one-kilometer trek up the hill will lead you to the caves where Sri Vedavyasa performed his penance.

Sri Madhwacharya was born in 1238 A.D in Udupi and was called Vasudeva.  He took Sanyasa/renunciation when he was 16 and was called as “Poornaprajna” and when he was appointed the head of the mutha/organization, he was known as  “Anandateertha”.  After he completed the commentary on Bhagavat Gita, he came to be known as Sri Madhwacharya.  He was a good athlete and a master of the Vedas.  He believed in the philosophy of “Dwaitha Vedantha”/dualistic.

Sri Madhwacharya executed many miracles like lifting a huge boulder weighing around 50 tons and placing it across river Bhadra in Ambuteertha near Kalasa, this boulder is known as “Bheemana Bande”.  An image of Madhwacharya is carved on this rock with inscriptions in Sanskrit over it.  In another incident he saved a boat caught in a storm in the ocean.  Yet another boat  caught in an ocean storm was saved with just a wave of a shawl from the Acharya, the owner of the boat was relieved and was so thankful that he offered the Acharya all the goods that was on the boat, but Sri Madhwacharya asked for the big lump of gopichand and carried it back to the mutha.  The idol of lord Krishna was inside the gopichand and Madhwacharya installed this divine and beautiful idol in Udupi mutha.

The muthas/temples of Madhwa community celebrates Madhwa Navami by offering special pooja/ritual and the holy text “Madhwa Vijaya” is read.  The grand celebrations are concluded with the portrait of Sri Madhwacharya or the utsav murthy/a small idol taken around the temple in a ratha/carriage.

Please Paste this http://www.Madhwas.com Link in this Post.
This is not SPAM. It is 100% Related Link . Hope You dont Mind Linking this website Link

Thank you Nagendra Kumar for the link. I have added the link in the post. The website is very useful for people who want to know more about Madhwacharya and his philosophy.
Regards,
Shantha