New Year is celebrated all over India in different ways and is also called by different names. Some states follow the solar calendar and some follow the lunar calendar. In Karnataka and Andhra Pradesh it is known as Ugadi.

Celebration of Hindu New Year in different regions of India is as follows:

Assam
New Year in Assam is known as Rongali Bihu. It is a festival of harvest. It falls around April 15th every year and is the first day of the Hindu month.  It is celebrated for 7 days in the state with great fervor. The farmers prepare the fields for cultivation of paddy. People feast and make merry on all the seven days. 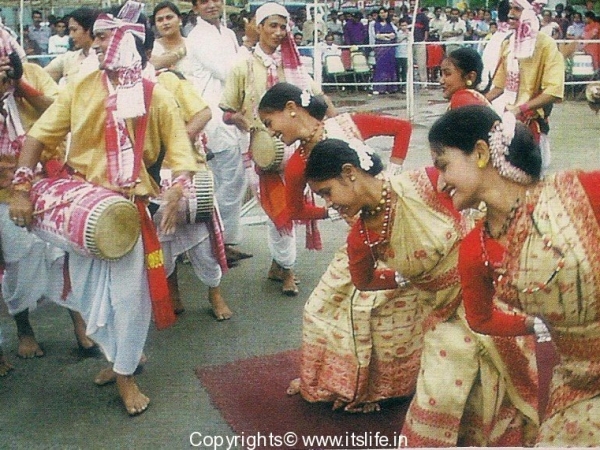 On this day Pitha/Rice Cakes and snacks prepared with Rice, Jaggery and Curd are served. Men and women sing Bihu Geet/ songs and enjoy themselves dancing known as bihu dance.

Jammu and Kashmir
Kashmiri Hindus celebrate New Year on the first day of the Hindu month, Chaitra. The festival is known as Navreh meaning New Year. This year (2010) it falls on 16th March. This day is very auspicious in Kashmir and is mentioned in Rajtarangini and Nilamat Purana.

Like in other parts of the country, the new jantaripanchanga / almanac is worshiped and read out.

On this day the Hindus visit the sacred spring Vichar Nag for a holy dip. Before breakfast they eat the Wye* herb along with rice powder cakes as Prasad / blessed food.

On New Year eve, a big plate is filled with rice or paddy, new almanac and Kreel-pach / sacred scroll, wye, sprouted grass, curd/yogurt, salt, silver and gold coin, cooked rice, wheat cake, walnuts, rice flour bread, dry flowers and fresh flowers. This plate is then covered with another plate. On New Year’s day, in the morning the youngest boy or girl will take off the covered plate and takes the plate with the goodies to the head of the family and then to the rest of the family members to have a look at it. This ritual denotes the prayer being offered to prosperity. The boy or girl who carries the tray is gifted with money. Every member of the family will pick some walnuts from the plate and drop it in the river. Devi Sahasranama, Indrakshi and other shlokas are chanted on this day.

People wear new clothes and visit temples like Hari Prabat. From this day, Nav Durga Puja commences in Kashmir. Festive food is prepared on this day and friends and relatives greet one another. People also enjoy going out on picnics and prepare the Kahwa tea with the special tea pot that they carry along with them.

*Wye, a special weed which resembles arabi in shape and  grows in marshes and is regarded to be very sacred and pure, is also kept on the thali.

Kerala
The first day of Malayalam calendar is celebrated as Vishu. It falls in the Malayalam month of Medam, April-May in Gregorian calendar. This year (2010) it is on April 15th. On this day Tulu speaking people in coastal Karnataka also celebrate their New Year known as Bisu. 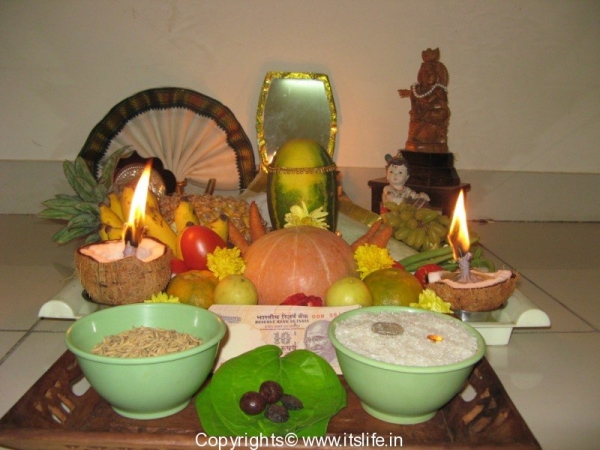 The highlight of this festival is the arranging and seeing Vishukkani . Vishukkani means “the first thing that is seen on Vishu day”. The vishukkani arrangement is made in the pooja room and it consists of idol of Lord Krishna, Mirror, Rice, Rice with husk, white kasavu pudava (Kerala style sarong with gold border), Cucumber, Betel Leaves, Betel Nuts, Holy text, Money, Fruits, Vegetables, gold coins or jewelry, Indian Laburnum flowers and lamp. Pleat a well-starched cloth like a fan and place it inside the brass kindi. Keep a pair of halved coconuts filled with oil along with cotton wicks. 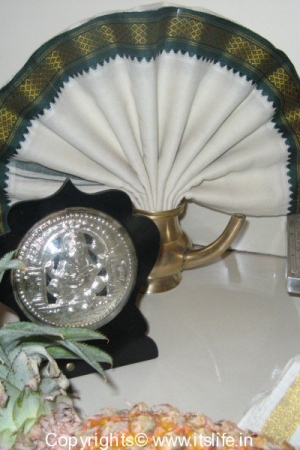 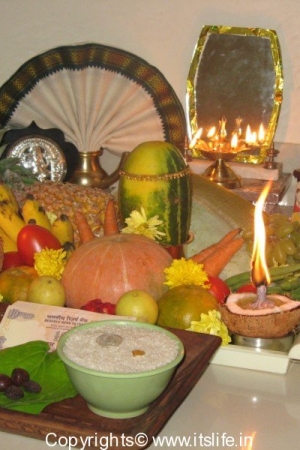 In the early morning the person who had slept near the Vishukkani wakes up and lights up the lamps and this person will lead all the other members with their eyes closed to the Vishukkani. This act on this day is believed to bring people good luck and prosperity. Later Vishukkani is shown to animals, plants and birds. 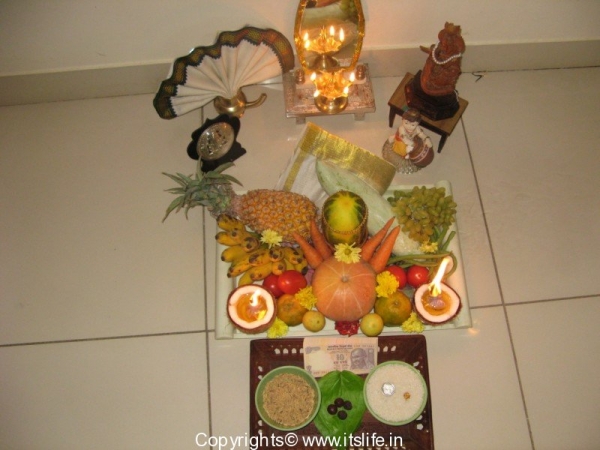 On this day new clothes are worn and the Hindu epic Ramayana is read. Money/gifts known as Vishukkaineetam is distributed to poor people, servants, and children. In the evenings children burst crackers.  A bitter neem dish is prepared known as Veppampoorasam, along with Kanji, Thoran and a Mango curry known as Mampazhapachadi.

Vishu is celebrated with great enthusiasm in Ayyapa Temple at Sabarimala and at Sri Krishna temple at Guruvayur.

Maharashtara and Goa
Hindus in Maharashtra and Konkan region celebrate New Year known as Gudi Padwa on the first day of Hindu month of Chaitra. This year it falls on 16th March. Gudi means Brahmadhwaj i.e, Brahma’s flag and this is worshiped and hoisted on the window or the right side of the gate of the house as a symbol of victory of good over evil. The Gudi is also believed to bring good luck and prosperity to the people. “Padwa” comes from the word Pratipada, which is the first day after Amavasya / no moon day. It is believed that this is the day Brahma created the world and the day is auspicious as it is known as Sade-Teen Muhuratha. On this day all good things can be started without actually consulting astrologers. 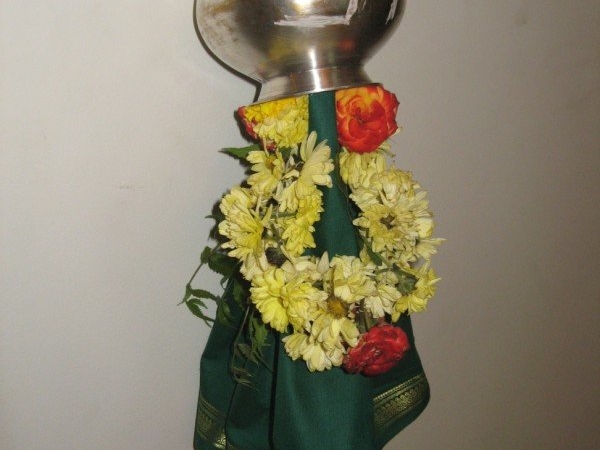 Gudi is prepared by tying a bright green or yellow cloth with zari border to a long Bamboo stick. Over the cloth neem leaves, a twig of Mango leaves and a garland of flowers are tied. Over this a silver or copper pot is placed over it in inverted position. Colorful rangoli is drawn in front of the Gudi.

The houses are usually cleaned for Gudi Padwa and everyone wears new clothes and festival food like Saunth Paak, Shrikhand and Poori is prepared. A paste of neem leaves, ajwain, jaggery and tamarind is prepared and offered to god and consumed by one and all at home as Prasad / blessed food. This Prasad also depicts the bitter and sweet things that one comes across in life.

Punjab
The state of Punjab celebrates New Year known as Baisakhi with a lot of enthusiasm. This is a festival of Harvest and for the sikh community it is on this day in 1699, that Guru Gobind Singh Ji founded the Khalsa Panth. It is celebrated on 13th April every year and 14th April every 36 years. On this day the Sun enters Aries, the first sign of Zodiac signifying the commencement of the New Year.

Considered a holy day, the devout wake up early in the morning and take a dip in the holy rivers. They wear new clothes. The farmers delightfully harvest the rabi / spring crops like Wheat, Barley, Mustard, Sesame Seeds, Peas and Oats. The farmers celebrate the day by performing joyful bhangra and gidda dance. 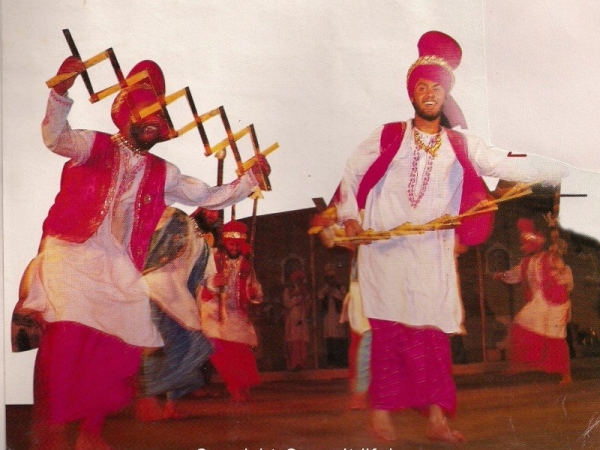 The Sikhs visit gurudwaras and the devotees receive Kara/Shira/Kesaribhath as Prasad / blessed food. A langar / community lunch is also organized in the Gurudwara.

In the evening people of Sikh community take part in the Baisakhi procession singing devotional songs. In villages Baisakhi fairs are organized where people take part in recreational activities and men compete in wrestling competitions.

Sindhi New Year
Sindhis celebrate New Year on the second day of Hindu month Chaitra and it is known as Cheti Chand. This year (2010) it falls on March 16th. This day is celebrated in honor of the birth of God of water, Ishtadeva Uderolal also known as Jhulelal who is a saint of the Sindhi community. Hence, water is worshiped today. They also observe what is known as Chaliho Sahab.

It is believed that for forty days and nights the followers underwent rituals and vigil on the banks of the Sindhu River. Sindhis take Bharana Sahib / thanks giving gifts to a nearby river or lake. The gifts include Oil Lamp, Misiri (candy), Cardamom, Fruits, Akha (a sweet made from rice, ghee, sugar and flour), Kalash, and Coconut. The tray is covered with cloth, flowers and leaves. They also carry an idol of Pujya Jhulelal Devta.

Tamil Nadu
Hindu New year in Tamil Nadu is known as Puthandu Pirappu also known as Varusha Pirappu. It is celebrated on the first day of Tamil month Chithirai. This year (2010) it falls on 14th April 2010.

On this day colorful Kolam/Rangoli are drawn in front of the house. A lamp is kept in the middle of the kolam called “Kuthuvillakku”. In the early morning the members of the house wake up and see the Kanni first. Kanni is similar to Vishu Kanni of Kerala, where Silver, Gold, Fruits, Betel leaves and nuts are arranged in front of the mirror.

People wish one another and exchange gifts. On this day new clothes are worn and delicious dishes are prepared. The panchanga / almanac is read out .The Manga Pachadi is prepared using Mangoes, Jaggery and Neem Flowers. Many temples organize car festivals on this day wherein thousands of people throng the temples.

Very nice and informative post Shantha, thanks! I am a regular visitor to your site and enjoy the different topics you blog on.

Thank you Nandini. Wish you a happy Ugadi.
Regards,
Shantha

Happy Ugadi to you too Shantha!

Mr. Hari, I do quite a lot of reading on the subject as well as talk to people belonging to the region before I write anything. And nowhere in the article have I mentioned that the Malayalis celebrate it as New Year. People from Tulunadu including my husband celebrate New Year on the day of Vishu. But nothing can take away the fact that it is the beginning of the first day of Malayalam calendar and the celebrations on this day. My friends who are Malayalis celebrate the day as New Year. Quote from http://en.wikipedia.org/wiki/Vishu “On the day of Vishu,… Read more »

Dear Shantha, I am so proud of you that , u r puted this for the public portal. I totaly agree with you and ur. thoughts.As a Bharatya we all should celebrate our new year in as per our customs. For Mr. Hari:,Dear mr Hari, that is way Ms. Shantha written this For the People , those are not even aware of our New year. Ham logo ko saram ana chahia , ham hamare culture ko bhul rahe aur english culture ko ……… AS A BHARATYA WE SHOULD CELEBRATE OUR NEW YEAR NOT JAN.1ST AS A NEW YEAR. WE ARE… Read more »

Dear Gopinath Panda,
Thank you so much for appreciating my work. By writing, I am learning a lot myself and it has been a wonderful experience interacting with a lot of people on this platform.
Regards,
Shantha

Wish you all a very happy Boghi and Maka[...]

Winter is the time for tender chikpea to[...]

Let us warm the winter nights with some [...]