Mahavir Jayanti is also known as Mahavir Janma Kalyanak and signifies the birth anniversary of the last and 24th Jain thirthankara Lord Mahavira.

Lord Mahavira was born in 599 BCE on the thirteenth day of Hindu month Chaitra in the Vira Nirvana Samvat calendar. March-April in the Gregorian calendar. This year (2016) it is on 19th April. 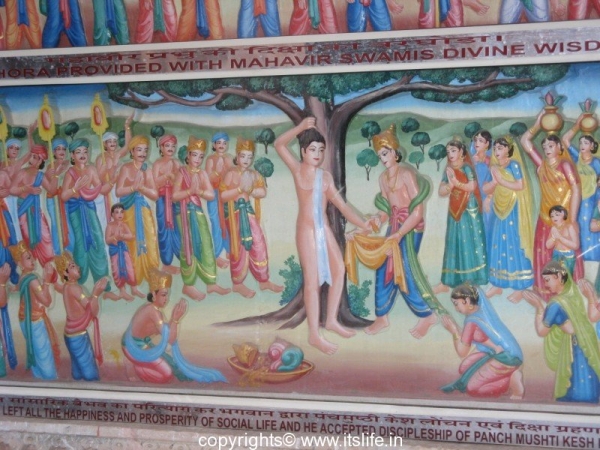 Picture taken in Osian
Mahavira was born to King Sidhartha and Queen Trishala in Bihar. The King and Queen were followers of the thirthankara Parsva. Queen Trishala is believed to have had a number of auspicious dreams during her pregnancy. Astrologers inferred the dreams to the child becoming either an emperor or a Thirthankara. The baby was named Vardhaman. Lord Indra bathed the new born with celestial milk, to signify that he would be a Thirthankara. At age 30 Lord Mahavira left the material world and sat in penance for 12 years. He attained enlightenment under the Ashoka Tree. He tore hair from his head and stopped wearing clothes as he was beyond pain, hunger, and need to cover his body. He traveled all over India in the next 30 years to teach his philosophy. Picture taken in Ranakpur
Mahavira preached ahimsa (non-violence), Satya (truth), Brahmacharya (bachelorhood), Astya (should not steal), and Aparigraha (detachment from people, places, and material). Mahavira left his body at the age of 72. He is not the founder of Jainism, but he was successful in spreading and reforming Jainism. On Mahavir Jayanthi, Abhisheka (ceremonial bath) is performed to the statues of Lord Mahavira. People visit temples and meditate and offer prayers. Jains in large numbers donate and take part in charitable missions like feeding the poor and saving animals from slaughter.