The main attraction of Mysore and the heritage building which gives the aura of royalty to the city is the grand Mysore palace also known as Amba Vilas. The majestic palace stands at the center and the whole city has evolved and spanned all around it. 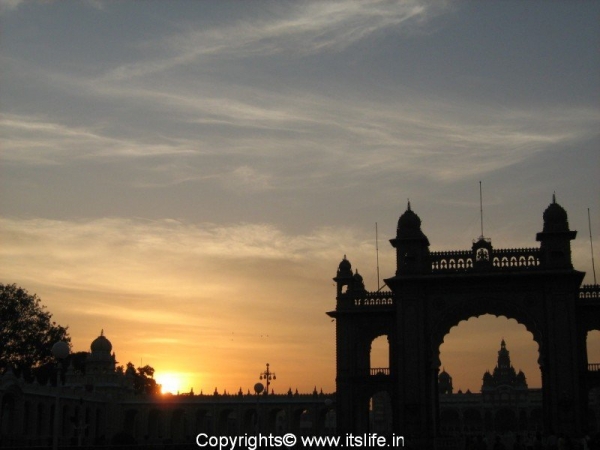 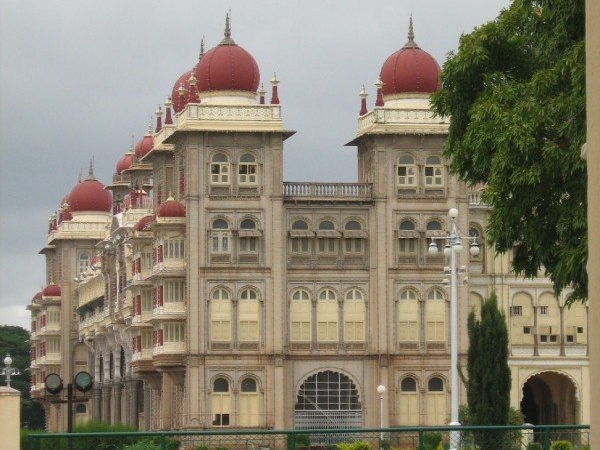 Brief History of Amba Vilas Palace
After the Wodeyars established their kingdom in Mysore, they built a palace in the 14th century. Amba Vilas is the third palace that the Maharajahs have built. The first one was built in 1638 and in the same place a new palace was built made of wood in 1803. The second palace built with wood was burnt down during the wedding of Princess Jayalakshmanni. A model of the burnt wooden palace is displayed inside the palace. 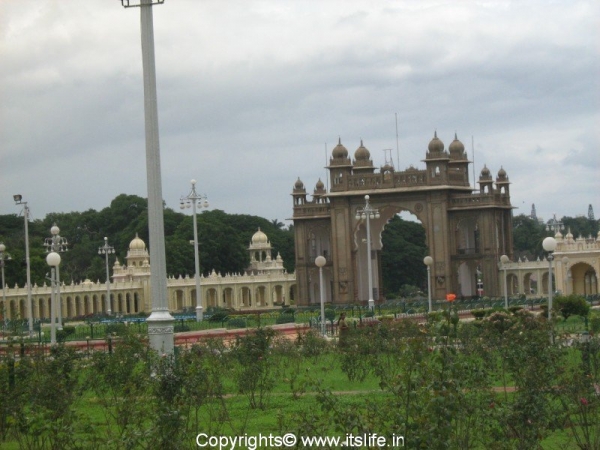 The third, which is the Amba Vilas palace was built under the guidance of British architect, Henry Irwin in 1897 and was completed in 1912 at the cost of 42 Lakh rupees. During the time the palace was being built Maharajah Krishanaraja Wodeyar IV and his family resided in Jaganmohan Palace.

Palace Architecture
The palace is a three storied building built in Indo-Sarcenic, Rajput and Gothic style surrounded by a beautiful sprawling garden. The building is built with fine gray granite with deep pink marble domes. The facade of the palace is the most eye-catching with seven expansive arches and two smaller ones flanking the central arch and these arches are supported by tall pillars. There are open courtyards in between the huge passageways. 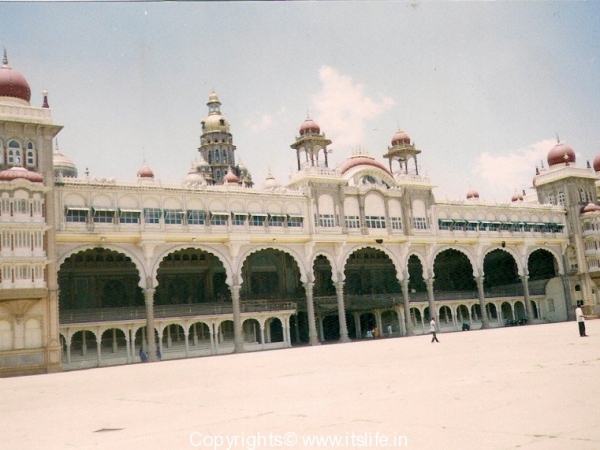 A sculpture of Gajalakshmi, the goddess of wealth flanked by elephants is carved on the central arch. 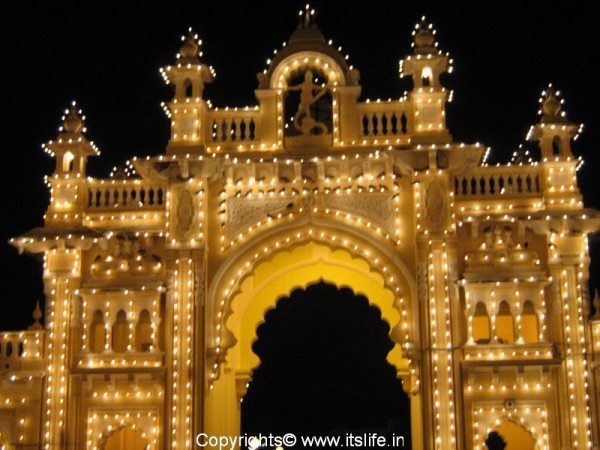 The highest point of the palace measures 145 feet with a dome, which is metal gilded with a red light and the total space occupied by the palace is 3.5 Sq. Km. The walls surrounding the palace is like a fort with majestic gates leading into the palace. Each of these gates is named as Jayamarthanda gate on the east, Balarama- Jayarama gate on the north, Brahmapuri and Karikalu Thotti gates on the west and Varaha Gate on the south.

Other attractions inside the palace
As you weave into the majestic corridors you are let into many rooms arranged with objects on display like the symbols of Mysore state, huge ivory tusks forming the frame of the Maharajah’s portrait, stuffed elephant heads with tusks intact, the golden howdah, the dolls that were part of Gombe habba during dasara, beautiful paintings on the wall bringing alive the royal pageantry of the past, paintings of royals etc.

As you climb up the stairs you are greeted with the life size statue of a seated H.H.Krishnaraja Wodeyar and huge mirrors arranged parallel as you can catch a glimpse of thousand or more images of yourself.

A room with silver and glass chairs is displayed. The teak wood intricately carved ceiling is a wonderful piece of art found nowhere in India.

Durbar Halls
There are two durbar halls in the palace one is Diwan-e-Aam / public durbar hall and Diwean-e-Khas / private durbar hall.

Dewan e Aam is the public durbar hall, which was added in 1940 and this hall is on the first floor and opens to the garden and the main gate Marthanda. The hall is very huge with pillars and arches, painted ceilings with chandeliers, high walls with paintings of gods and goddesses, the floor with mosaic and embellished with semi-precious stones. On the south and north of the eastern portion are the galleries for the courtiers. This was the hall where the common people would meet the king. The doors leading to this hall is inlaid with ivory and doors made of silver. 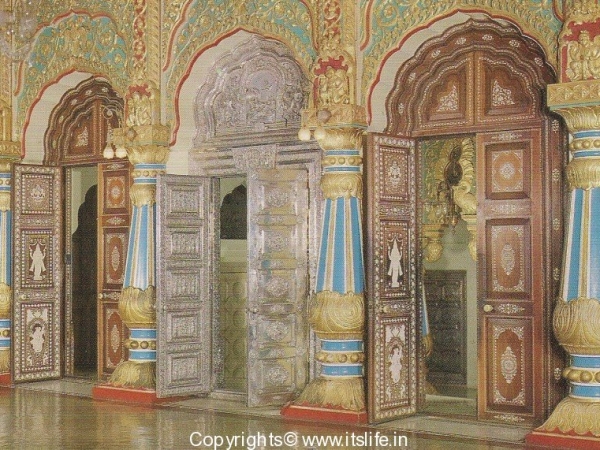 Dewan-e-Khas is the private Durbar hall is magnificent and this verb does not do any justice to the actual sight. The floor, wall, pillars are all painted and decorated with rich colors and to complement them is the golden throne placed in the middle.

The Royal Throne weighs 200 Kg made of solid gold throne consists of the main seat, a staircase and a golden umbrella. The royal throne according to legend belonged to the Pandavas and was in Hastinapur. Kampaliraya is said to have brought the throne from Hastinapur to Penugonda in Andhra Pradesh and it was kept buried. In 1336, AD Hrihara I, of the Vijayanagar Empire retrieved the throne and the throne was used by the Vijayanagar kings at Anegondi for more than a century. During the early 17th century, the Governor of Vijayanagar rulers at Srirangapatna obtained the throne. In 1609, the ailing Governor gave this throne to Raja Wadiyar, who ascended the throne with pomp and festivities during the inauguration of Dasara festivities in 1610. And thus the tradition of this legendary throne continues. It is displayed only during Dasara.

The room of armory contains a display of various arms used by the royal family from 14th century to the 20th century. 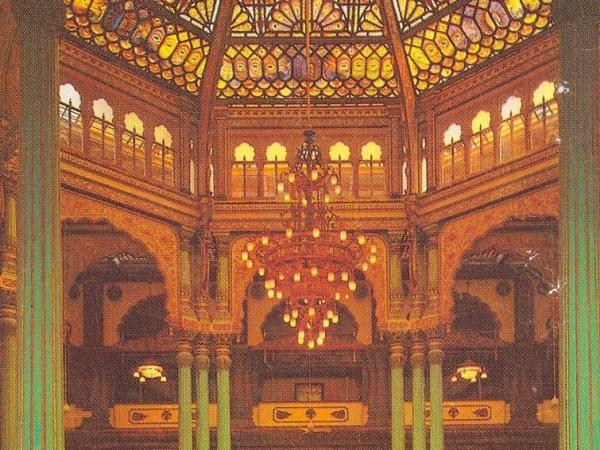 The Kalyana Mantapa / marriage hall is a beautiful octagonal hall with a high peacock themed stained glass ceiling imported from Belgium. As the sun rays hit the stained glass of different colors, it reflects many colors into the room making it look more beautiful. The floor is a combination of green and blue mosaic and these were imported from England. The pillars surrounding the mantap have small carved figurines representing the dasha avatar and other puranas.

Other attractions outside the palace

A pair of Bronze tigers in the garden is a favorite place to pose for pictures. 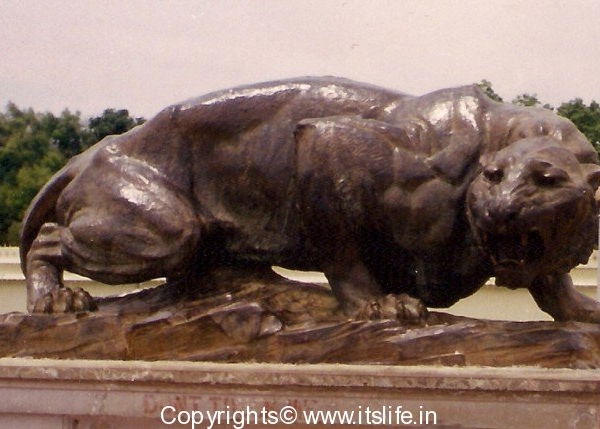 Palace Illumination
The palace is a sight to behold when the whole palace is lit up in the evenings. When the lights are turned on, it is an “aha!” moment for the people who have come for the first time and even for people like me who must have seen the lit palace a million times. 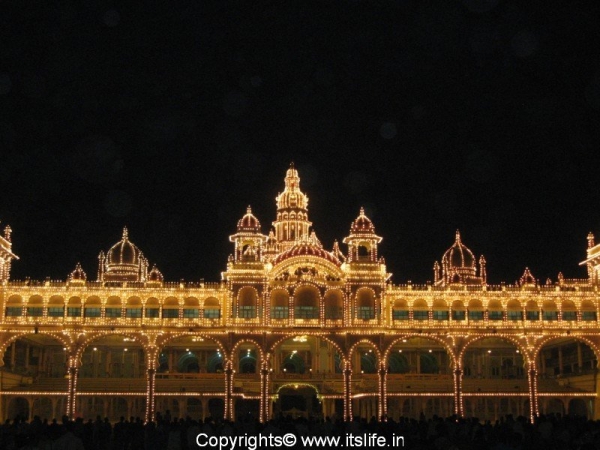 The shimmering palace looks like one out of a fairy tale book. It takes 96,000 bulbs to illuminate Mysore palace and in an hour 8,000 units of electricity is consumed. 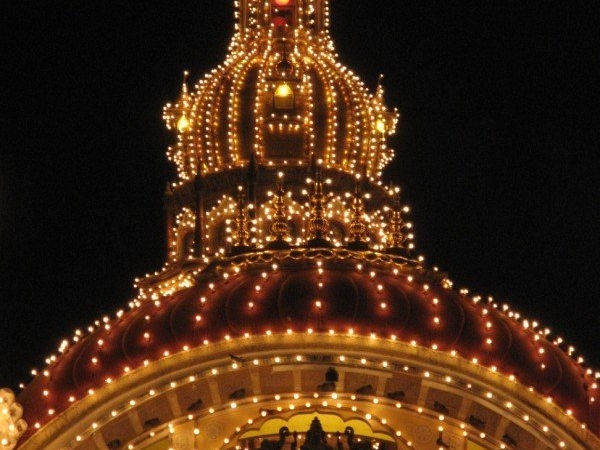 Private Residential Museum
Just behind the main palace is a building, which belongs to Srikanta Datta Narasimharaja Wodeyar, the scion of the Mysore royal family, who has set up a private residential museum, which is open to the public. The museum displays the living room of Krishnaraja Wodeyar with intricately carved and gold leaf painted doors and pillars, stained glass window panes, marble and tiled floors. On display are many priceless artifacts from the personal collection of Wodeyar dynasty. Some of the items on display are crystal chandeliers and furniture, silver thrones, furniture, crockery and exquisite paintings of the old Mysore school, palanquins, oriental furniture, Chinese inlay chairs, pooja items, costumes, uniforms, perfume bottles, trophies and the personal armory of the former rulers, replica of Dasara elephant, silver clock with a photo of Maharaja Jayachamaraja Wodeyar, ‘Vajra Mushti’ wrestling trophies of Maharaja’s stables of the period of 1824-1924, birthday (Vardhanti) throne, silver wedding throne of Krishnaraja Wodeyar IV, photos including polo championship of Krishnaraja Wodeyar IV and his brother Narasimharaja Wodeyar, 1940 Dasara procession, queen’s palanquin etc. 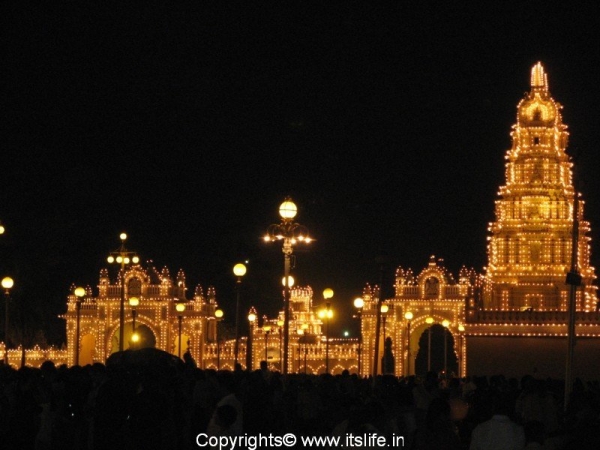 Palace during Dasara
Dasara festivities are held with great devotion, pomp and show both inside the palace and outside. The current scion of Mysore Sri Srikantadatta Narasimha Raja wodeyar performs all the rituals that his ancestors were performing during Dasara festival. The palace hosts musical recital from leading artists. The Dasara procession starts from the palace grounds.

Timings:
Palace Lights: On Sunday evenings, festival days and national holidays between 7 and 8 pm
The palace: Open daily from 10.30 am to 5:30. Visitors enter only through the south gate