Mysore or Mysooru is a place of interest for tourists, historians, archeologists, academicians and architects. There are innumerable heritage buildings in Mysore, which add a fairy tale touch to the princely state.  A tour dedicated to showcase the heritage buildings of Mysore is conducted during the Dasara festival celebrations.

Gandhi Square or Clock tower is always abuzz with business activity as it is situated in the heart of Mysore with major business arterial roads meeting at this point.  The eye-catching clock tower was built in the year 1927 to commemorate the 25 years rule of Mysore king Nalwadi Krishnaraja Wodeyar.  The clock tower is situated close to Town Hall and opposite to Chamarajendra Circle near Balarama gate of Mysore Palace.

The clock is 75 foot tall built in Indo Saracenic style.  The dome on top resembles the palaces in Rajasthan and adds beauty to the clock.  Kannada numerals are etched on the dial of the clock.   The clock has been serviced recently to start chiming again. 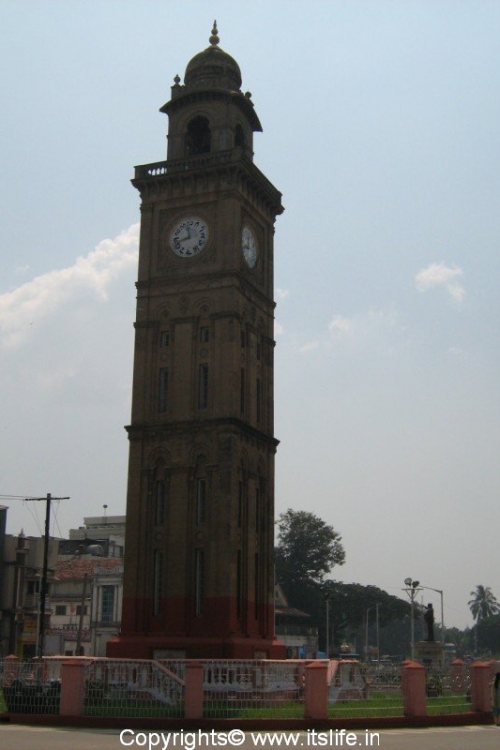 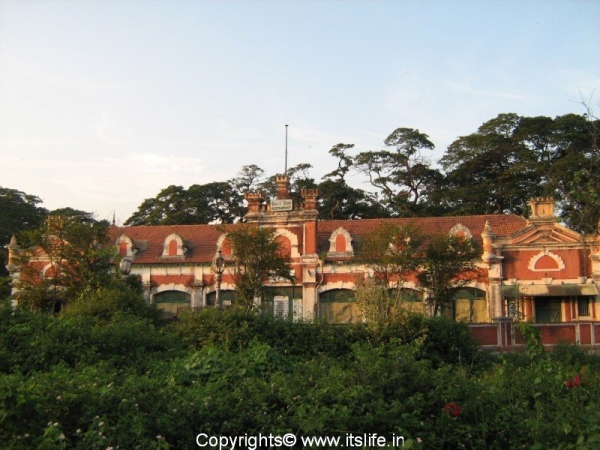 Gun house was built in 1910 as a “Gun-shed, Guard and office rooms”.  The architecture shows signs of a mixture of Tudor style of the 19th century with a notched parapet built on top of the wall, with alternating merlons and crenels for decoration or defense, which is known as battlement. 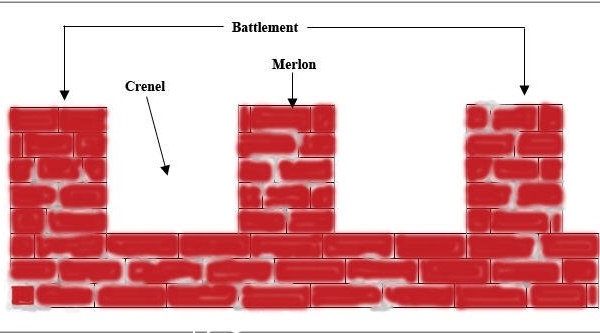 A turret i.e., a small tower projects vertically from the wall of the building similar to a medieval castle.  This small and elegant building also has some features of the 17th century baroque architecture from Italy.

Dormer windows, which are structures that protrudes from the plane of a sloping roof  line the central hall.  These windows are a source of ventilation for the top floors and also increases the height of the hall.   I wish this cute building was well maintained and housed a small museum showcasing the artillery used by the Maharajahs. 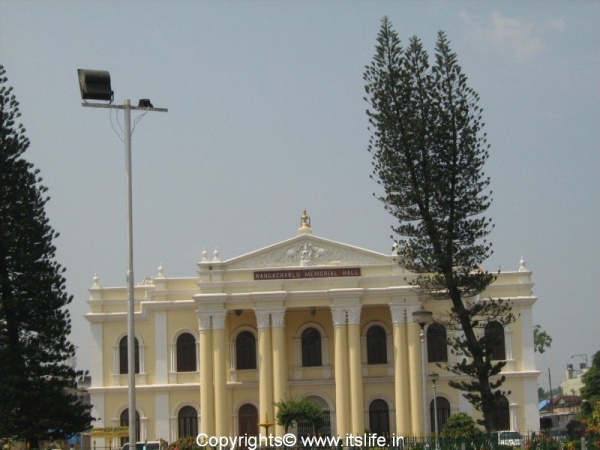 This elegant building with a sprawling garden in front and space all around was constructed in 1884 to remember the first Dewan / Minister of Mysore state Sri Chettipantam Veeravalli Rangacharlu.  The Christmas trees planted in the garden contrasts and adds charm to the building.

Roman architecture is reflected in the pediment (triangular section), which is supported by solid pillars.  This elevation adds a royal touch to the building.  Intricately carved designs with Goddess Gajalakshmi adorn the pediment.

Initially, this building housed the City Improvement Trust Board and City Municipal Offices.  Now, known as Town Hall hosts many cultural and political programs.  It is situated diagonally opposite to Mysore Palace Balarama gate. 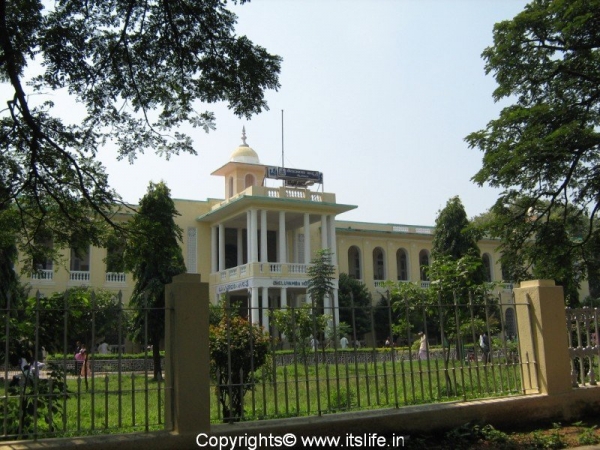 K.R.Hospital as it is popularly known was constructed at a cost of three and a half lakhs with 100 beds and Cheluvamba hospital known as Vanivilas Hospital was built in 1880 with 24 beds.  This hospital is one of the oldest hospitals in the country and the architecture bears similar stamps of all the other heritage buildings in the city.  Nalwadi Krishnaraja Wodeyar founded the Mysore Medical College in 1924 and this was the first in the Karnataka region and the seventh in India.

Dewan Poornaiah was a person with great qualities and served the yester rulers like Hyder Ali, Tipu Sultan and Nalwadi Krishnaraja Wodeyar.  He was appointed as the first Dewan of Mysore state.  He built this choultry / community hall for pilgrims to stay while touring Mysore and for students studying in the Maharaja’s Sanskrit College.  Unfortunately, only a small part of the building remains as the building was demolished for laying a road. 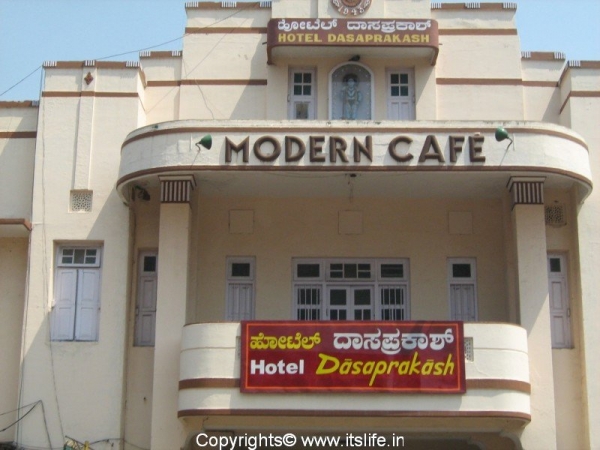 Dosa / Pancakes / Crepes at Dasaprakash was a treat not be missed by any Mysoreans.  It was in fact nicknamed as Doseprakash because of the tasty Dosas they churned out.

Dasaprakash means “Light of the servant of God” was founded in the early 1920’s by Sri Seetharama Rao.  The outlets are now spread far and wide across continents. 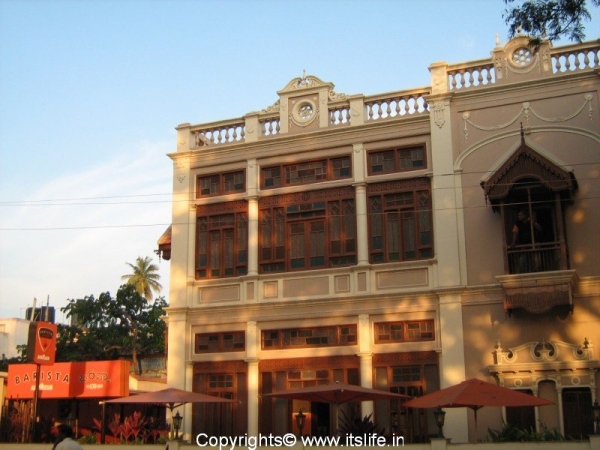 An extremely elegant quaint old house on the road leading to signal lights of 100 feet road from Agrahara is converted into a Barrista Cafe.  A cuppa there sure will take one down the memory lane.
0 0 vote
Article Rating

Thanks Sriram…Wish you a very Happy Dasara! I just came back from Mysore and all the heritage buildings are looking their best with a fresh coat of paint and illuminated with the right shade of lights in the night.