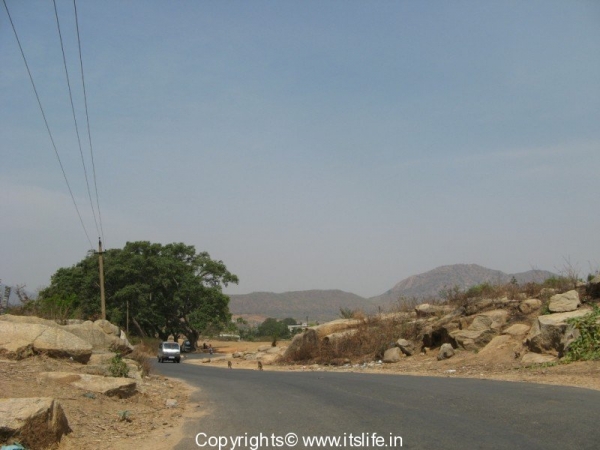 Lord Subramanya the god of snakes is also known as Saravana, Muruga, Shanmukha and Karthikeya. He is the younger son of Lord Shiva and Parvathi. 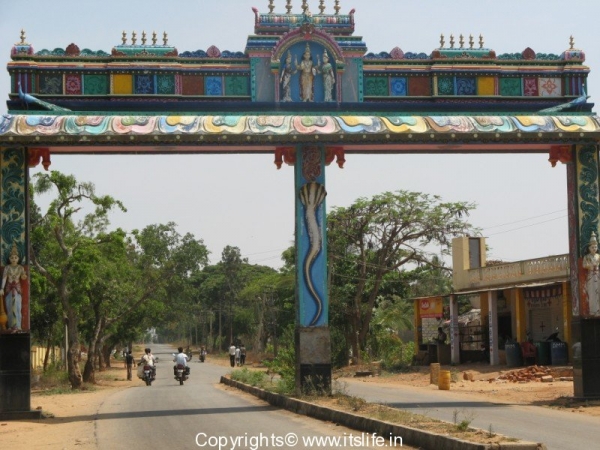 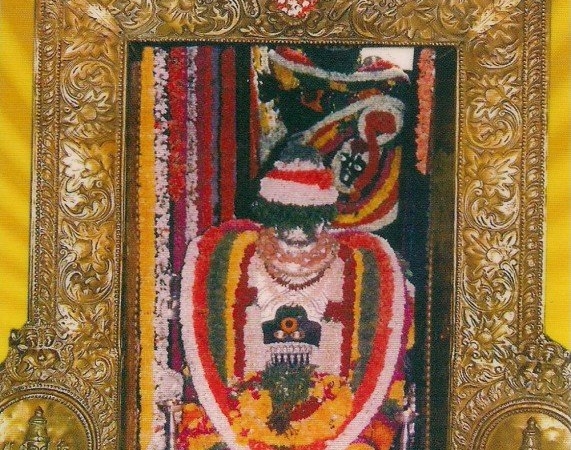 Special poojas are held on Pushya Shudha Shashti, Skanda Shashti, Vaikashi Vishakam and Narasimha Jayanti. Hundreds of people assemble to have a darshan of the Lord on these days. It is also believed that childless couples are blessed with children if they visit this place. 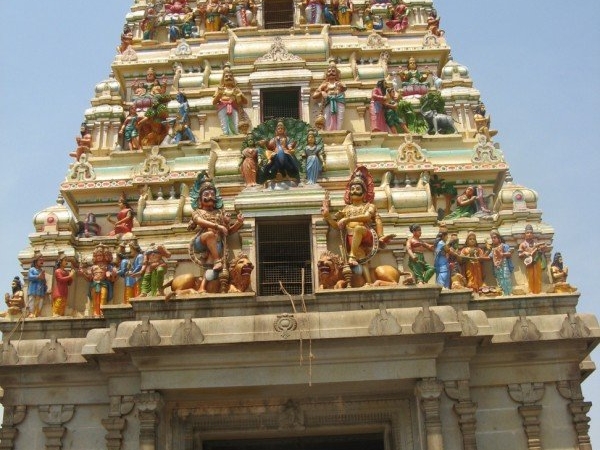 A hutta / snake mound / ant hill is present outside the temple to which people offer prayers and pour milk into it. 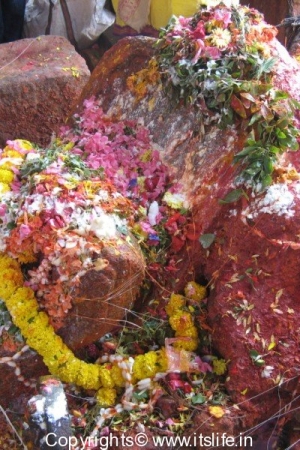 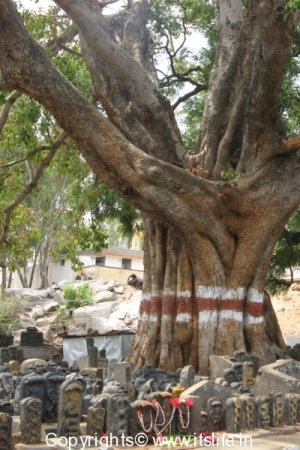 Under a huge Pepal tree many Nagappa / Snake carved on stone are installed known as Nagara Prathishte by devotees asking for favors. 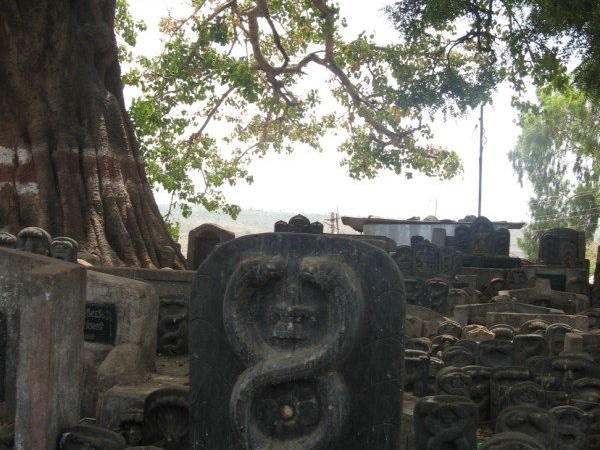 During the Hindu month of Magha on the day of Shashti a fair is held, which is attended by many people. 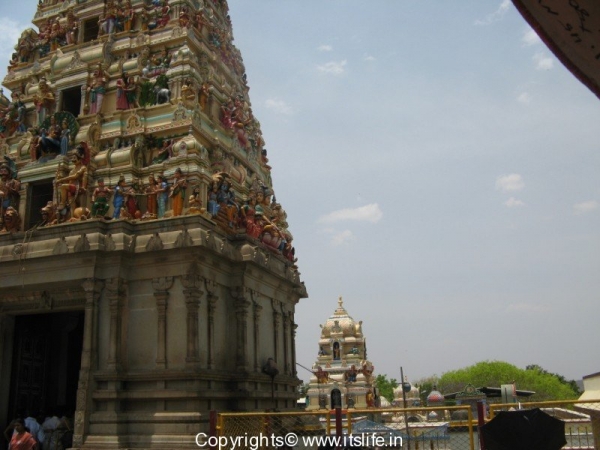 Nearby places to visit are Nandi Hills, which is 30 Km away and Nrityagram, which is also 30 Km away. 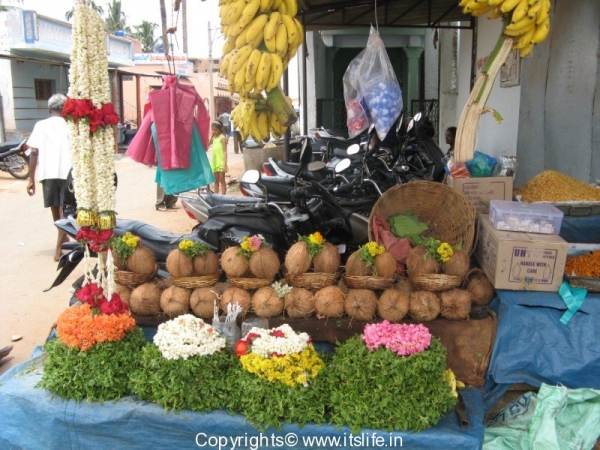 Found ur site to b informative.. great work.. keep it up!

Will be visiting ur blog now n then, I appreciate ur prompt n clear responses for every post/queries by readers unlike other recipe blogs.. I think u n lakshmi[TOM] are only two ppl who reply promptly to user’s posts..

Dear SN,
Thanks for the lovely words. Readers and their response are the motivation for writers to provide and share relevant, accurate and educative information.
Regards,
Shantha

Can you provide me the contact details of Ghati Subramanya temple

Ramesh, The details are already given in the post.

VEry useful and relevant info…very good job …keep it up…

Very informative. Just read your Blog. On my way to Ghatti Subramanya. Thank you for sharing Pictorial information about the place.

Hey Deepak,
Glad to know you liked what you read here. Hope you had a great time at Ghati.
Regards,
Shantha

Hi Uma,
Thanks for your feedback. I had not heard about the Shani temple, I will write about it if I visit the place.
Regards,
Shantha

hi nice blog. Any idea if Thulabara is available in Ghati subramanya temple. pl mail me if u know any contact no of temple office.

Thanx a lot for ur information . Mostly will plan this weekend. Take care.

Thanks for ur info.

You are welcome Naveen.

Hi Chandramouli,
Please call up the temple to find out about the poojas 080-27657131.
Regards,
Shantha

plz give me the addres for to send DD to ghati subramanya?

The address is already given in the blog post. Please check again Mamatha.
Shantha

Hi Shantha,
Could you provide driving directions after the new airport? Does it come on the highway.

You could e-mail me the details.

HI Rajith,
The route is – Bangalore-Airport road(BIAL)-Yeshwanthpur-Doddaballapura-Ghati Subramanya.
Have a nice trip.
Shantha

Dear Shantha,
Very informative & useful site.
Im planning to visit this temple, I need information regarding the train availability to this temple.

My query is whether is there any stoppages in this station or we need to get down in Doddaballapur station. How much is the distance from railway station to this temple?

Since im allergic to bus travel / do not own my own transportation as of now. Could you please help me???

Yes it is Jayaraj.

When I googled Info about Ghati Subramanya Temple a couple of days back, I found your blog, Thanks for very Informative explaination, Yestarday we visited n witnessed maha abisheka and found the place very holiest n visit was meomorable and n Had lunch at Dasoha.

Thanks angain for your awesome work,
Regards,
Nagareddy

Hi Nagareddy,
I am very happy that you found the information informative and helped you plan your trip.
Thanks for visiting and the feedback.
Regards,
Shantha

We have a carried an article, a personal account about Naga Dosha- Ashelsha Bali Pooja on our site. We have added link to your blog article on Ghati Subramanya. Thank you.
http://goo.gl/Qi2RE

Thanks for the detailed information. Great work!!!

Thanks for visiting and appreciating Vijay.

it is intersting to seen the details of the temple

May You get best blessings of God for giving such a helpful information to the devotees.

Thank you so much for your kind words.

I should say a bunch of thanks to you. A click away for the complete information about Ghati Subramanya. really doing good job. Appreciated.

Shantha,
Phone number proided on this site 080-27657131 is not working. Is there any other alternative phone number?

I went with all my Family to give Birth Hair (Mudi) For my Twin boy babies who was 2.5 yrs old and we went on Wednesday and It was very easy for us to take mudi and Bath – water coming from the tap and a good Darshana and also we had Annadanam food with all of my family members and It is great a temple and very powerful.

Maybe the number has changed. I will let you know if I visit the place again.

Glad to know about your visit to the temple and your experience.

Can elders visit this place? how many steps to climb or vehicle can go all the way up? Thanks

Yes Kumaran, elderly people can definitely go. Vehicles go right up to the entrance. Please avoid weekends and Shashti days, as these days are crowded and you have stand in the queue.
Hope you have a comfortable darshana.
Regards,
Shantha

Last Sunday and Monday, me and couple of my friends went driving for a pilgrimage to a couple of temples in western ghats; Dharmastala and Kukke Subramanya. Enroute to these places, we visited a small wind farm and the historic temple of Belur. I shall write in detail about the trip some other time. But here i am writing about an unique place we visited on the second day of the trip. This was a temple in the town of Ujire in Dakshin Kannada district, about 15 Km north of Dharmastala. On sunday evening at Dharmastala, my dear friend Kiran… Read more »

May i know the history behind ghati temple?

Hi Harinath,
Whatever I know, I have written in the post. The next time I visit, I will try to unearth more details about the place.
Regards,
Shantha