O you shaggy-headed banyan tree standing on the bank of the pond, have you forgotten the little child, like the birds that have nested in your branches and left you?

Do you not remember how he sat at the window and wondered at the tangle of your roots that plunged underground?
The women would come to fill their jars in the pond, and your huge black shadow would wriggle on the water like sleep struggling to wake up.

Sunlight danced on the ripples like restless tiny shuttles weaving golden tapestry.
Two ducks swam by the weedy margin above their shadows, and the child would sit still and think.

He longed to be the wind and blow through your rustling branches, to be your shadow and lengthen with the day on the water, to be a bird and perch on your top-most twig, and to float like those ducks among the weeds and shadows. 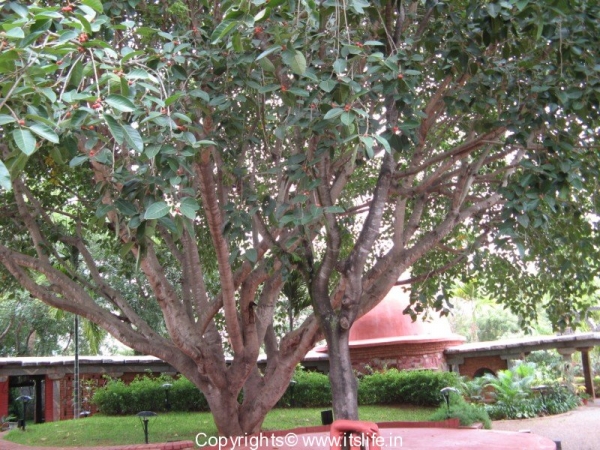 There were many Banyan trees lining the Jhansi Lakshmi Bai Road in Mysore and I remember our teacher while walking on that road from school to the pavilion for a sports meet would ask us what those roots are called? Prop roots we used to reply in chorus! Many  boys would use the prop roots to merrily swing around a la` Tarzan. 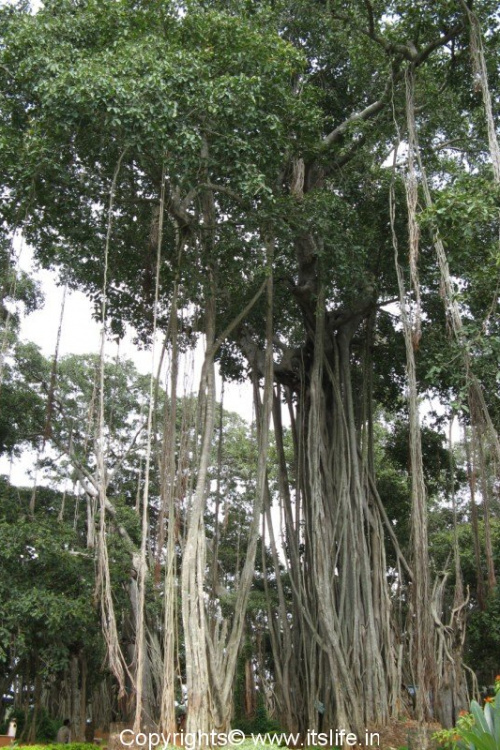 Plant Summary:
Banyan tree is India’s National tree and grows all over India. It belongs to the family Moraceae*. It is known as “alada mara” in Kannada, Vata Vriksha in Marathi, and generally known as Kalpavruksha / wish fulfilling tree. This evergreen tree is considered sacred and is worshipped by Hindus and in Maharashtra married women worship the tree during Vata Savitri Vrata / festival. The tree grows spreading into acres of land with each prop root becoming an independent tree. 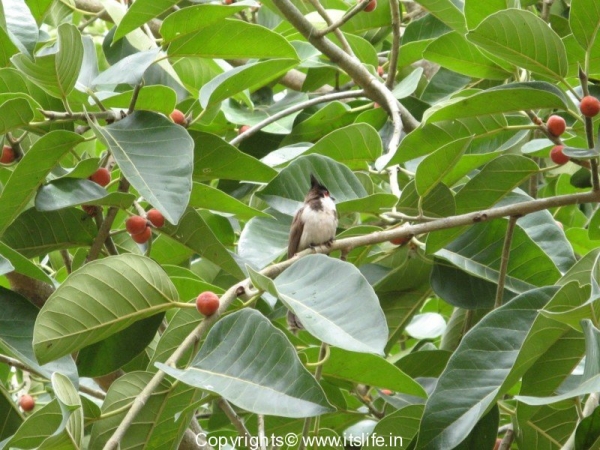 It was under the Banyan tree that Gautham Buddha attained enlightenment. Hence Buddhists consider it as a tree of knowledge and tree of life.

The Portuguese named this tree Banyan, as they found out that in Gujarat the Bania / merchants community would sit under the tree and conduct their business. The name was passed on to the British and the tree came to be known as Banyan tree. There are many species of the Banyan tree. 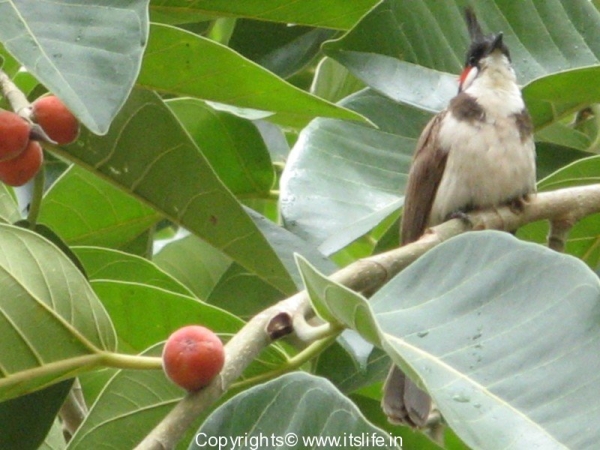 The seeds of banyans are dispersed by fruit-eating birds. If a seed gets embedded between rocks or crevices, it germinates into a tree and becomes an epiphyte on other trees, buildings or rocks. 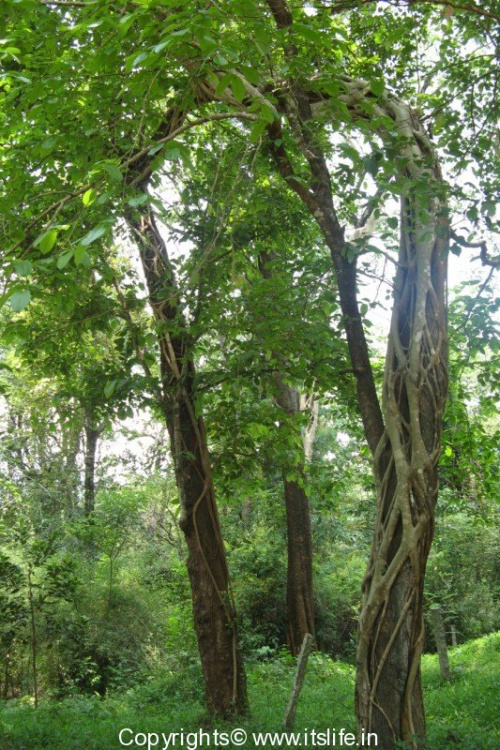 Sometimes the tree, which grows on other trees, kills the host and hence is known as strangler fig and this can be seen in the Western Ghats. 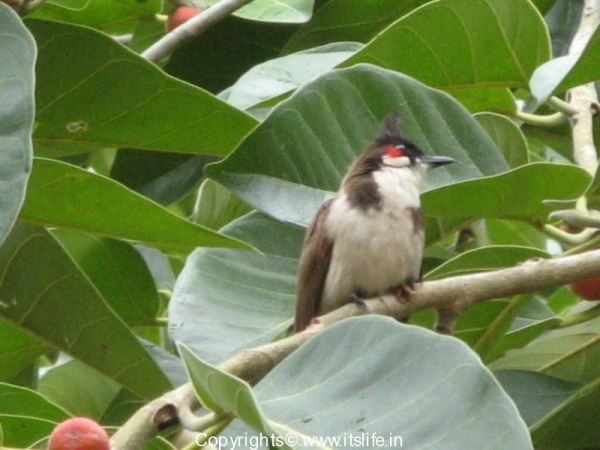 Banyan tree grows to a height of 21 meters. The leaves of this tree are 15 to 20 cm long, shiny, broad and oval. When the leaves are broken a white sticky fluid oozes out of the stems. 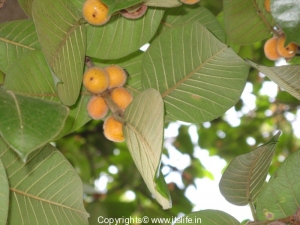 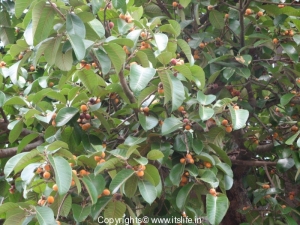 The tree does not bear any flowers and the fruits are either red or yellow with tiny seeds covered with fiber. 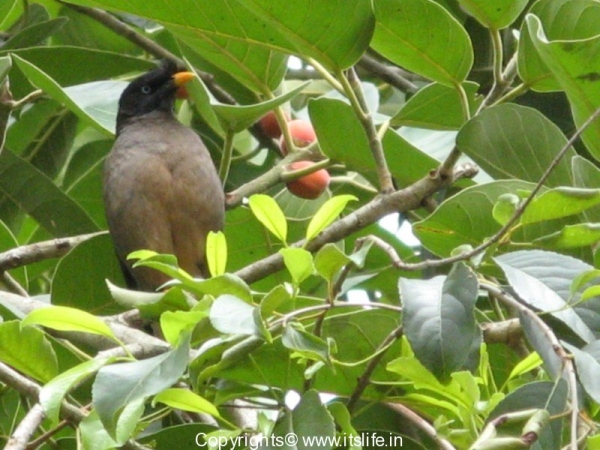 The Banyan is the most preferred for making bonsai. The oldest living Banyan bonsai is 240 years old. 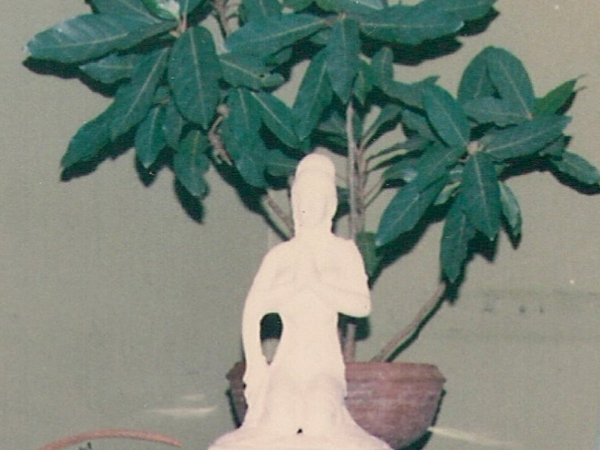 The two biggest and oldest trees in India are in Bangaluru and Kolkota. The Angkor Wat temple in Cambodia is famous for its 900 years old temple as well as the many huge towering Banyan trees growing over the temple.

The leaves of this tree are used to make plates to serve food. The trees are good for soil conservation and the wood of the trees are used by carpenters to make useful things.

Propagation:
Banyan tree is easily propagated by root tip cuttings or the eye cuttings. It can grow in any type of soil.

Medicinal uses:
The Banyan tree has many medicinal properties. The leaf, bark, seeds and fruit of the tree are used to treat disorders like diarrhea, polyuria, dental, diabetes etc. The milky latex that comes from its leaves and stems is used in many Ayurvedic medicines.

Moraceae* often called the mulberry family or fig family  is a family of flowering plants comprising about 40 genera and over 1000 species.

Hi Pratap,
Thanks for leaving the note.
Regards,
Shantha

Namaskar
Liked all your Blog pics-
Enchanted with the Birds pics on the Tress -How do you take them and where are such birds seen -so nice and adds beauty ?
Pl join -visit/ share on my Prakruti-Mother Nature Blog at –

Something I have been working through per emails -in a small circle years ago- then on FB —but felt a Blog was more suited in this area; so from 15th Dec–Abt 30 blog posts added from my diary & archives-
Added 5 Sankaranti Goals setting also-
Swagatham
Rgds
CaptTR

Thank you for liking the pictures. Having a good zoom helps in taking pictures of birds, else at the slightest movement they fly off.

Your blog is extremely inspiring. Please keep up the good work.
Regards,
Shantha

Hi Captain,
I have used Canon powershot A710, 7.1 Mega pixels with 6x Optical zoom to capture the birds here. It is a very easy to use and nice camera. I have also bought Nikon 5000 SLR camera. The pictures come out well in Nikon but I need to buy telephoto lens for more zooming power. My brother-in-law who is an avid birder suggested 100 X 200 lens. I hope to buy this lens someday.

Thank you Vidya for your encouraging words.

Thanks for visiting Naina.
Regards,
Shantha

Is thr someone who can tell me where i can find Banyan Tree in bangalore nearby Banaswadi area.

we cant get information in marathi?

Hi Vipul Chaudhari,
Thank you for your visit. This website supports only English. I wish I knew all the beautiful languages of India and could publish in all languages.
Regards,
Shantha

it was too gooooooood.

BANYAN TREE IS NOT ONLY THE NATIONAL TREE OF INDIA BUT ALSO REPRESENTS LIFE AND ITS CONTEMPLATION. GOOD TO TACKLE AND PLANT BANYAN BONSAI. IT CONTAINS NATURE
IN IT AND SUSTAINS LIFE AND EARTH.

Thanks for the note, Pradip.

Where I can get a Bonsai plant of the Banyan for the birds.

Check with a nursery nearby.

The author of this post has undoubtedly done a great job by shaping this article on such an uncommon yet untouched topic. There are not many posts to be seen on this topic and hence whenever I came across this one, I didn’t think twice before reading it. The language of this post is extremely clear and easy to understand and this is possibly the USP of this post.

Thank you Sophia for your kind words.