The meaning of the above Sanskrit verse is – I bow to the great Ramanujacharya who knows nothing else but devotion to lord Vishnu and who is immersed in the worship of the lord’s  feet.

Sri Ramanujacharya was the founder of the Visishtadvaita/Srivaishnava system of philosophy in Southern India. He was born in 1017 A.D in a village near Perumbudur in Tamil Nadu to father Kesava Somayaji and mother Kantimathi.  This year Sri Ramanujacharya Jayanthi is on 21st April 2018.

Sri Ramanujacharya was a brilliant student and mastered the Vedas.  He traveled the length and breadth of the country and wrote his commentary on the Brahma Sutras known as the Sri Bhashya.  He greatly differed from the Shankara philosophy. 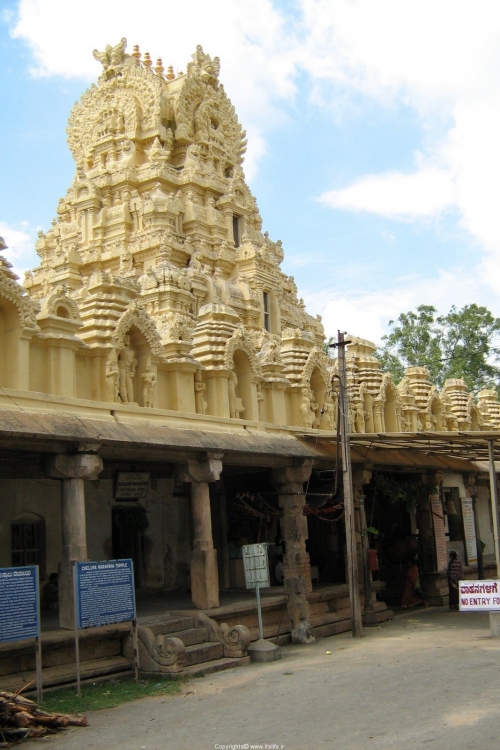 In the state of Mysore he converted the Hoysala king Bittidevaraya into the Visishtadvaita sect.  He was the architect of Tonnur Kere/lake and has installed a Vishnu idol in one of the ancient temples situated there.  He traveled to Melukote then known as Thirunarayanapuram and lived here for 14 years spreading the Srivaishanva philosophy.  Many people converted to this sect in this region are referred to as Mandyam Iyengars.  Now, Melukote is an important piligrimage centre for Srivaishnavas.

On his birthday, an utsava/procession of Sri Ramanujacharya is taken out in many Srivaishnava temples.  Works of the great saint like Ramanuja Noottandadi, Sri Bhashya and Yathiraja Saptati etc. are read.  Special pooja/rituals are held in temples in honor of this great saint.

He attained Samadhi in Srirangam, Tamil Nadu in 1137 A.D.  The Ramanuja sannidhi/shrine is inside the Sri Ranganathaswamy temple.  An idol of the Acharya is installed in the sannidhi and the robes on the idol are those that were worn by Sri Ramanujacharya when he was alive.

Your site is very informative carrying loads of information.. Keep it up 🙂