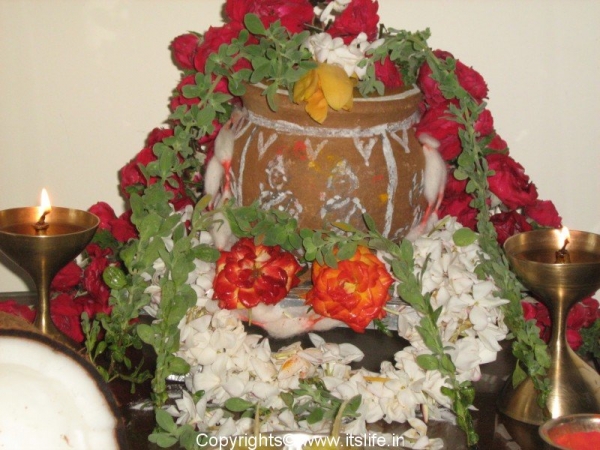 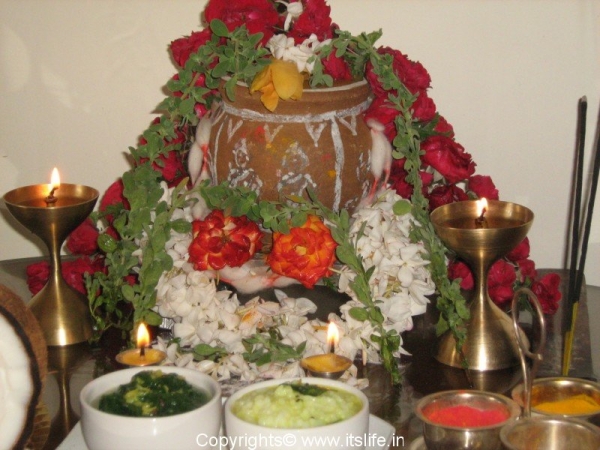 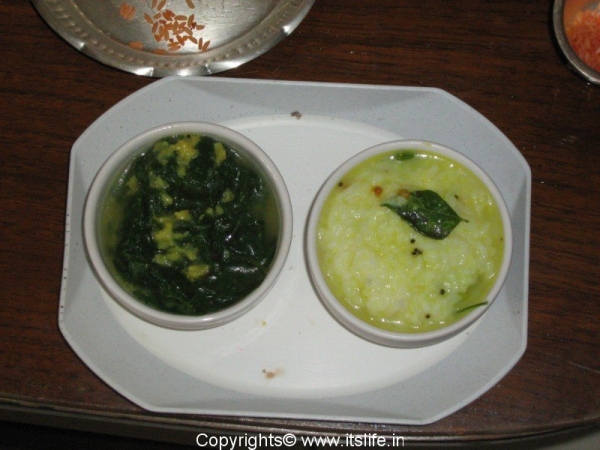 Legend associated with this festival:

Once upon a time there lived a Brahmin called Somesha Bhatta with his wife and sons.  The queen visited their house one day and as it was Sampath Shanivara Pooja day they had prepared Ambali and Soppina palya.  The Queen sat through the pooja and saw them offer the humble dishes of Ambali and Soppina Palya as Naivedya to god.  She laughed and mocked at them and left the house.  In a few days time, the neighboring King waged a war against them and tried to imprison the king.  The King and Queen ran away from the kingdom into the forests.  The queen who was 9 months pregnant got into labor and delivered twin girls.  She placed the babies on a banana leaf and prayed to god to take care of them and followed her husband.

Somesha Bhatta had come into the forest to pluck flowers and was surprised to see the babies.  He took them home to his wife who was pining for girl children.  They name them Sayakka and Dhyeyakka.  They take care of them lovingly like their own children.

Rich Sayakka forgot to do the pooja and hence her husband lost his kingdom and the King was held prisoner.  With four sons she lived in penury and was extremely worried and sad.

Dhyeyakka continued to follow her parent’s advice and performed the pooja every year and was living happily.  Sayakka sent her son one by one to Dhyeyakka’s house.   Dhyeyakka treated them lovingly and gave them money and sent them home but every time the careless sons lost the money.    At last Sayakka herself came to Dhyeyakka’s house.  That day was Shravanan Shukravara Pooja, they performed the pooja together with a lot of devotion and did aarathi and feasted on holige and payasa.  They chatted and caught up with one another and slept peacefully.

The next day being Shravana Shanivara Gowri / Lakhsmi pooja,  Dhyeyakka was busy preparing Ambali and Soppina Palya.  Sayakka peeped into the kitchen and was extremely angry seeing the humble food being prepared and assumed that as she was poor, her sister was preparing poor man’s food.  Seeing her sister’s displeasure Dhyeyakka reminded Sayakka that it was Shravana Shanivara Gowri / Lakshmi pooja and reminded her about the procedure of the pooja.

Sayakka realized her flaw and apologized.  Both the sisters prayed to goddess Lakshmi / Gowri for forgiveness.  Sayakka went back home and started performing the pooja without fail.  Gradually her imprisoned husband was released and they got back their kingdom.  They also meet their real parents and all of them live happily ever after by the grace of Goddess Lakshmi / Gowri.

Dear Shantha,
Great Blog. congrats on the superb work. I want to bring to your notice that your pooja details and and pictures are just copied and pasted in this blog here without any credit to you. check the link here
http://meerasubbarao.wordpress.com/2010/08/26/sampat-shravan-shukravara-shanivara-pooja-details/

Hi Radha,
Thank you for your encouraging comments and the information regarding the copied post.

About the copied information in a PDF being posted by Mrs. Meera Subbarao, I can only say that she was misled by a reader Roopa sree. I admire Mrs. Meera’s blog and have given many link backs from my blog.

As expected by her, she has removed the information from the blog as soon as you have notified her about the existence of the original content.

Thanks once again and keep visiting,
Shantha

hello Shantha,
Your is very helpful for amateurs like us and living in mumbai,
As mentioned in the site the vratas observed is it mandatory to invite married or girls to celebrate and if most of them keep the vratas ,how is time managed on the same day please elobarate?
Or those who have not kept the vratas invited or ladies from the belonging to the same community invited,
Its very difficult to commute in mumbai because of distance hence though not from same community usually neighbors can make
Thanks again for this site with recipes , traditions,and rituals

Thanks for visiting. No comments regarding caste and communities. Please consult your elders for the rituals that needs to be performed in your family.

hello shantha,
in my earlier reply i have already apologizsed to you
our concern is of security aswell . as you are able track the addresses while we are at disadvantage ,can using different names create confusion when chatting people use this precaution if you didnot like it you should have mailed instead giving my location on the net for it to be viewed i am no threat to you or your family but in usa IT industry comprises of many indians

Hi Seema,
Please check your comments, in one your comments you yourself have mentioned that you live in Atlanta.

Please check the following blog written by an Indian living in US, who performs all the rituals at her home: http://meerasubbarao.wordpress.com/about/