Rakhsha Bandhan festival is a celebration of the brother-sister bonding, celebrated mainly in North India. It falls on Poornima / full moon day in the Hindu moth of Shravana.  August – September in Gregorian Calendar.  The festival falls on the same day as Nariyal Poornima. For the festival date click here.

The sister keeping her brothers style in mind carefully selects and buys the amulet from the market. Varicolored Rakhis of different shapes and sizes are available in the market during the festival. On the day of the festival, the sister ties a rakhi (amulet) around the right wrist of her brother and applies vermilion, and colored Rice on his forehead. She offers sweets to him and in turn the brother gives gifts to his sister and assures her of his full support and care. 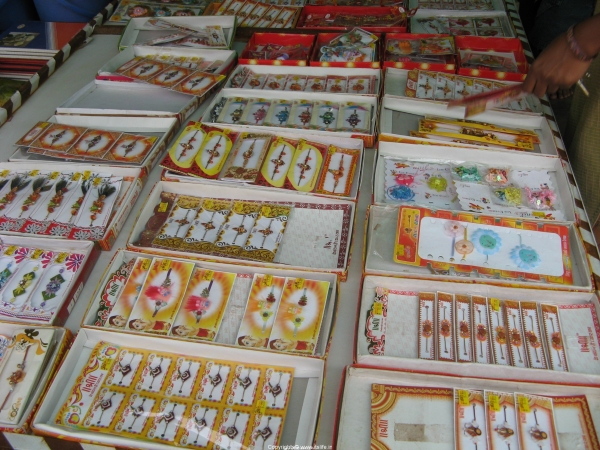 According to Hindu mythology, the demons and the gods were fighting with each other. The gods were over powered by the demons, which worried Indra, the king of gods. His wife, Sachi Devi equally worried prayed and tied an amulet on Indra’s wrist to protect him and again sent him to the battlegrounds. Indra won the battle on that day and returned triumphant due to the amulet. Since this incident took place on Shravan Poornima day, it has become a tradition to celebrate it on this day every year.

As this amulet was powerful in protecting the one who wore it, it was called as “Raksha Sutra” and the ceremony shifted from wife tying it to her husband to a sister tying it to her brother and the festival itself came to be known as “Raksha Bandhan”.