Onam is celebrated in Kerala with a lot of enthusiasm. It is their biggest harvest festival and it falls in the Malayali (Malayalam is the language spoken in Kerala and hence the people of Kerala are fondly called as Malayali) month of Chingam. This is around August – September according to Gregorian calendar.  For the festival date click here.

According to Kerala mythology, on this day it is the homecoming of their beloved king Mahabali affectionately called as Onathappan. Mahabali was an asura (demon), but he was a good, kind and just king. The only weakness he had was his big ego. His popularity had reached to such an extent that the devas (male gods) were worried and upset so they approached Vishnu to find a solution for this. Vishnu aware of Mahabali’s generosity came down to earth disguised as Vamana a Brahimin Boy.  He then went to the king and asked him whether he would be able to donate three feet of land. King Mahabali readily agreed. Vamana then grew tall to reach the sky and began to measure his space. His first step covered the sky, the second measured the earth and when there was no space left for the third, King Mahabali offered lord Vishnu his head to place his foot.  Lord Vishnu did just that and pushed him into pathalam (deep into the earth) and that was the end of his ego. But for being an able king Lord Vishnu granted him a boon that he could visit the earth and see his prajas/people once a year. So the people to welcome the king and show him that they are happy and prosperous celebrate Onam/Thiru Onam. 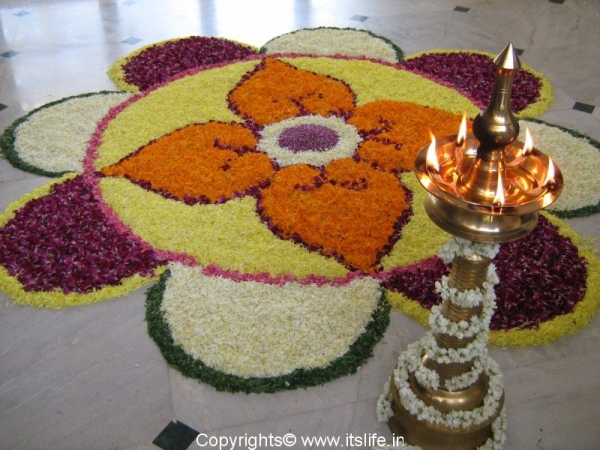 Onam is celebrated for 10 days. During these days women wear Mudum Neriyathum/Mundu and make designs on the floor using flowers known as Pookalam. Around the Pookalam women perform the Onam dance known as Thiruvathira Kali. The lunch on Thiru Onam day is known as Onasadya comprises of 11 to 13 delicious dishes served on a plantain leaf. In earlier days the Onasadya comprised of 64 dishes served on 3 plantains leaves.

Some of the dishes prepared during Thriu Onam are listed below,

Many outdoor activities take place during the festival like the exciting Snake Boat Race on Pampa river called as Vallamkali, Kaikottikkali folk dances and traditional games known as Onakalikal are played. Women and children on swings tied to trees around the village completes the good times of Onam festival.

The grand and royal procession of elephants bedecked in gold in Thrissur with beating traditional drums draws the curtains over the celebrations.

Onam festival attracts a lot of visitors and tourists to the state of Kerala, which truly lives up to its tag line “Gods own country”.