“I bow down to the ferocious and heroic like Lord Vishnu. He is burning from every side. He who protects. He is auspicious and the death of death personified.” 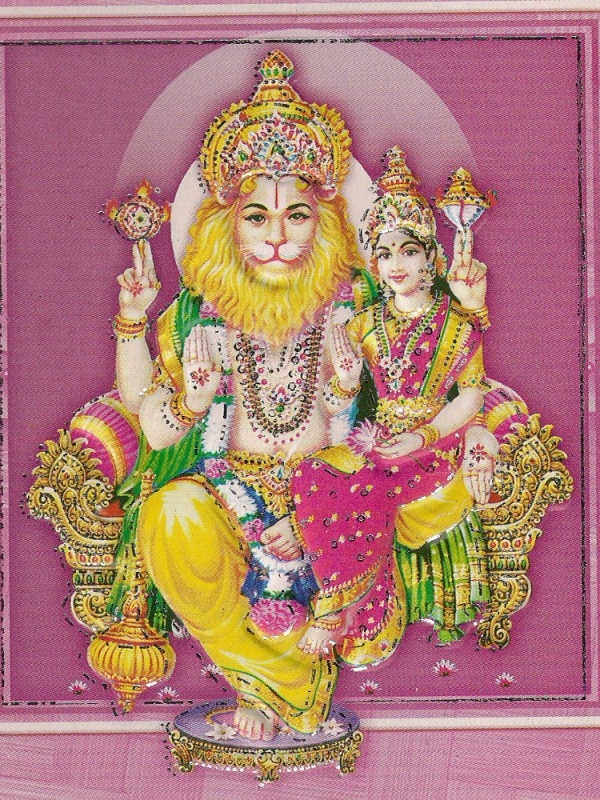 Narasimha is one of the avatar / incarnation of Lord Vishnu. Nara means human and simha means Lion, hence Narasimha is one with the body of human and head of a Lion. This festival is in honor of the birth of Narasimha and it falls in the Hindu month of Vaishakha, May-June in Gregorian calendar. This year (2018) it falls on April 29th.

Lord Vishnu had to take this avatar, as he had to destroy the wicked king Hiranyakashapu, who had a boon that no man on earth could destroy him. His ego and arrogance had reached such a peak that he wanted everyone to chant his name instead of any other gods or goddesses. His son Prahalad was a devotee of Vishnu; Hiranyakashapu was extremely angry with Prahalad for chanting Vishnu’s name and forbade him to chant any other name than his. Father and son used to argue and fight regarding this and Hiranyakashapu even tried to poison his son but his devotion to Lord Vishnu saved him.

The other gods requested Vishnu to do something about this before innocent people were killed for praying to other gods. So, Vishnu in the avatar of Ugra / angry Narasimha appeared from a pillar and killed Hiranyakashapu.

On Narasimha Jayanthi, Lakshmi and Narasimha are worshipped with flowers, leaves and wheat grains and you can chant “Sri Lakshmi Narasimha Karaavalambam Sthotra”. On this day people do not eat anything made with rice and prepare Sajjige, Huli Avalakki, Kosambari and Rasayana as prasada / blessed food.