One of Lord Shiva’s statues in Nanjanagud is Kiratha Arjuna – Shabara Shankara statue. The character of KiraAthaArjuna is introduced in the Aranya Parva (forest section) of the great epic Mahabharatha. 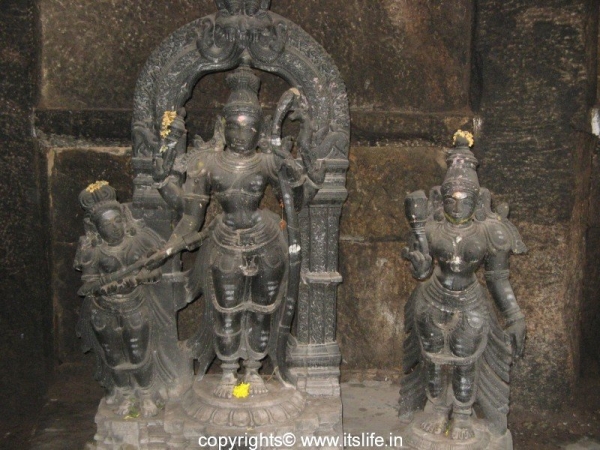 During the Pandavas tenure in the forests, they get the opportunity to meet Sage Vedavyasa.  The sage tells Dharmaraja (eldest brother) the greatness of Lord Shiva and asks him to send Arjuna (third brother) for Shiva’s penance to get the “Pashupathasthra” (weapon).  With this weapon Vedavyasa assures that the battle with Kauravas can be won easily.

Dharmaraja then advises Arjuna with the Beeja manthra (chant) provided by Vedavyasa and sends him for penance.  Arjuna reaches Indra Keela Parvatha (Mountain) and with great devotion goes into a deep penance.  The energy emanating from his penance affects the other Rishi and Muni (Saints and Sages) living in the mountain.  The saints and sages approach Lord Shiva and tell him that an unknown young man with many weapons around him is in deep penance in the forests. They ask Lord Shiva to investigate and provide a solution from the energy emanating from the young man’s penance.  Lord Shiva using his divine (jnana/knowledge) vision understands it is Arjuna.  To test Arjuna, Lord Shiva dresses up like a Hunter (Kiratha) and immediately his consort Girija /  Parvathi also dresses up like a huntress. 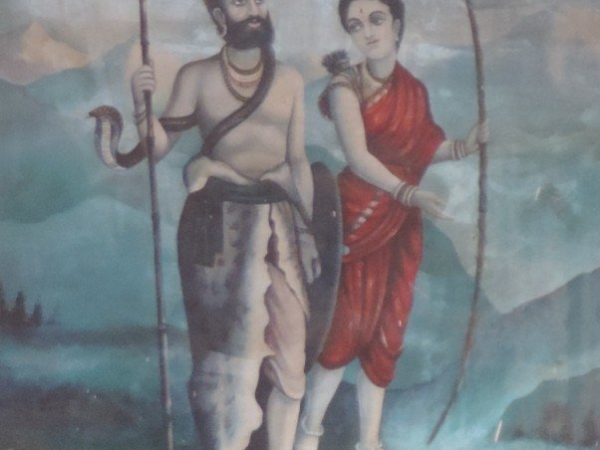 Ganesha, Nandi, Shanmuga and all the other Ganas (rakshasas/demons) also dress up like hunters.  With nets and a band accompanying them, they arrive at Indra Keela Parvatha. 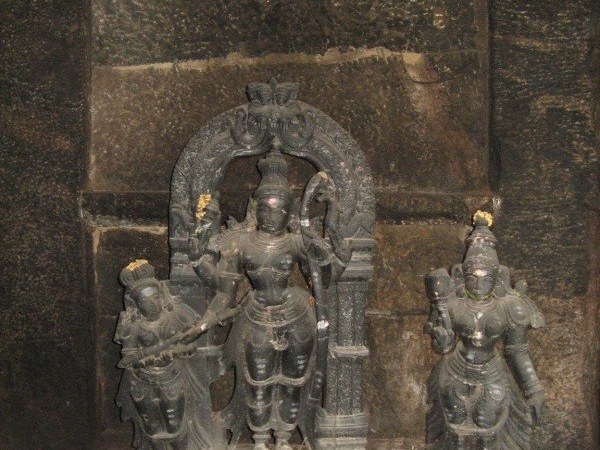 A demon in the forest named Mookadaanava hears the din and gets very angry.  He takes the form of a Wild boar and attacks Lord Shiva’s group.  Lord Shiva hits the Boar with an arrow.  The Boar wounded runs and comes across Arjuna in deep penance and starts to roar loudly.  Arjuna disturbed by the roar immediately takes the Gandeeva Arrow and using the Bow hits the Boar with the arrow killing it instantly.

Following the boar Lord Shiva’s group arrives and claims the Boar, but Arjuna argues that the Boar died due to the hit from his Arrow and says that the Boar belongs to him.

The Arguments continue and erupts into a war.  Both of them use all types of weapons and none used by Arjuna has any effect on Lord Shiva.  Lord Shiva was gulping all the powerful weapons that Arjuna used along with the powerful mantra (chant).  Arjuna was baffled as he knew he had the power to overcome even the gods and goddesses and here was an ordinary hunter he could not defeat.

Arjuna thought that there must be something wrong with him and made up his mind to worship Shiva and ask him to take care of this hunter.  He made a Linga using sand and started worshiping the Linga with wild flowers and prayers.

Arjuna looked up at the hunter and saw all the flowers that he had offered to the Linga were resting on the head of the hunter.  Realization hit Arjuna that the person standing in front of him was not just a hunter but Lord Shiva himself! Arjuna repents the arguments and battle that he had with Lord Shiva and prays for forgiveness.

Kind Lord Shiva pacifies Arjuna and hugs him and blesses him.  He tells Arjuna that he disguised himself to test him and shows his true form along with his consort Parvathi / Girija and gives him the “Pashupathasthra” and blesses him with victory.  Parvathi / Girija similarly blesses and gives Anjanaasthra.  Ganesha, Shanmuga and others give Arjuna a weapon each and disappear.
Arjuna feels blessed and grateful for the kindness bestowed on him by Lord Shiva’s group.