Vijayadashami being the last day of the celebrations, a grand Jamboo Savari/procession passes through the streets of the city. The main attraction here is the idol of the goddess Chamundeshwari placed in the golden howdah on top of the Ambaari aane/elephant seat. The golden howdah is made using 80Kgs of gold. In the glorious past, when the kings ruled the state of Mysore, the kings used to sit in the howdah during the procession.

The procession will be inaugurated in a traditional way by worshipping the Nandi Dhwaja (a sacred pole) at the Balarama Gate of Mysore Palace.  A 21 gun salute booms at the palace grounds. 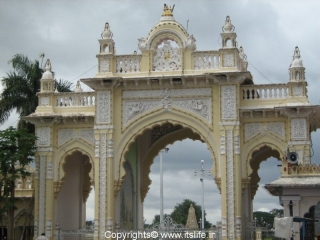 The Chief Minister and the scion of the royal family, Srikantadatta Narasimha Raja Wodeyar in the palace grounds, shower flowers on goddess Chamundeshwari atop the ambari. 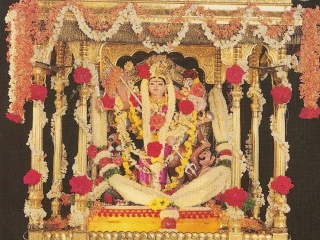 The procession starts from the palace and proceeds towards Bannimantap. A distance of roughly 4 kilometers is covered and ends at the Banni/Shami tree in Bannimantap. 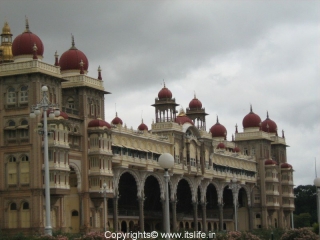 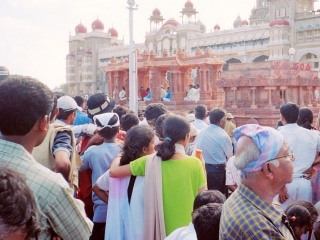 Picture4 – Tableau in the procession

Silver carriage, band carriage and other traditional objects are also part of the procession. War equipments like cannon carriages are also showcased in the procession. The erstwhile kings used these to carry equipments like swords, shields and cannon carriages to the battlefields. Naupath and Nishane Elephants carry the erstwhile Mysore empire symbols. 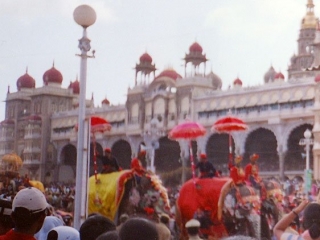 Lakhs of people throng the route of the procession to catch a glimpse of the bygone era. The rural people enjoy it the most and plan days ahead to witness the “nota”/procession along with their family.

A brief Description of some of the cultural troupes commonly participating in the procession is given below:

People climb on trees and buildings to catch a glimpse of the procession.  Tickets can be bought to view the Dasara procession sitting inside palace grounds.  Purchase of Gold cards is another option for the people, which allows the card holders the privilege of viewing the Dasara procession from a special enclosure and visit other places of interest around Mysore without entry fees for the duration of the festival.

After the procession reaches Bannimantap, the Banni/Shami tree/Prosopis spicigera is worshipped with great devotion and it is believed that the tree blesses the devotees with shakthi/power.