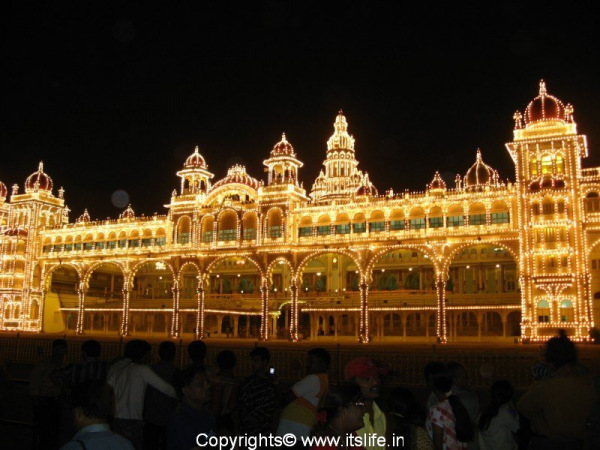 Mysore Dasara procession during the Maharajah’s rule used to be on a larger scale and grander.  My grandparents and parents generation go on and on narrating the grandeur of the procession during “those days” when the Maharajah would sit on an elephant in the golden howdah.  A 21-gun salute would be sounded just before the start of the parade.  The paintings in Mysore palace also brings alive the pageantry of Dasara procession celebrated during the royal bygone era.  The procession was known as Jamboo Savari, “Jamboo” means elephant and “Savari” means to ride on an elephant. 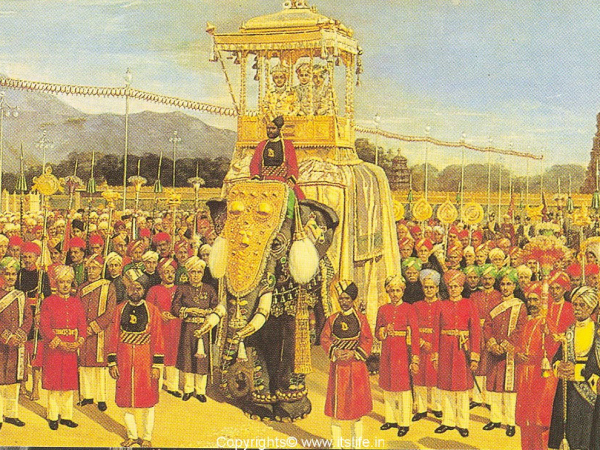 The dasara procession would mark the end of the 9-day festivities in the city.  Households in Mysore would host a multitude of guests from different places to witness the procession.  The procession route was through Doddapet/Ashoka road during that time.  The dewan/minister would receive the king near the elephant gate and offer a garland.  The durbar bhakshi had the honor of walking in front of the elephant with the howdah.  Bhakshi used to be the master of ceremonies.  My grandfather’s uncle was a bhakshi in the Mysore palace and hence my grandfather would narrate about how the Mysore royals celebrated Dasara.

The Dasara elephant used to march elegantly, with the Nadaswaram playing in the background and the encouraging crowds behind – it used to be a magnificent sight to behold, one that belonged to another age.  Ambari Aane/royal elephant, carrying the Maharaja in the splendid golden howdah was a symbol of royalty and fairy tale pageantry. The honor to sit in the howdah belonged to the kings and his close relatives.  It seems during the days of Krishnaraja Wodeyar, the fourth Yuvaraja Kanteerava Narasimharaja Wodeyar would sit on the rear in the golden howdah.  Later, when Jayachamarajendra Wodeyar became the Maharaja, his maternal uncle Dalvoy Devaraj Urs would take the rear seat. 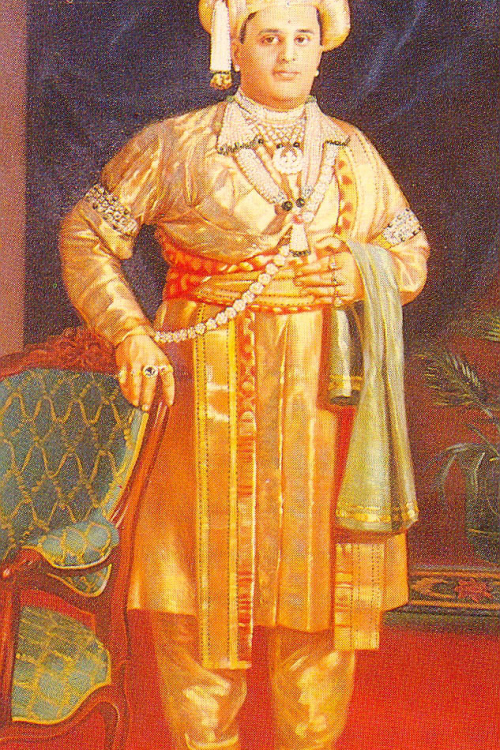 In the procession Maharaja’s body guards, the palace infantry, the artillery force, two battalions of the cavalry known as the Mysore Lancers and the Mysore Horses, three battalions of Mysore infantry would participate.  Guns drawn by bullocks also would participate along with decorated elephants mounted with wooden howdahs; camels and decorated horses.  All the participating personnel would wear different and distinct colored ceremonial uniforms.  The band carriage, silver carriage, state cow, horse and elephant would march majestically along with soldiers carrying the symbols, titles, banners and flags of the royal State of Mysore.

The policemen and other officers on duty would also be in dignified uniforms.  Similarly the European and Mysore state bands would be dressed in ceremonial uniforms.  The palace officials and dignitaries would also wear the traditional uniforms.  All the titles, banners and flags would be carried on either side of the ruler and behind too.

The Durbaris who included non-official gentlemen would be in front of the royal elephant.  It was tradition that the Deputy Commissioner, the Superintendent of Police and the Municipal Commissioner (who was also the Municipal President) would go on the horseback in the procession.

There used to be many pendals/marquee put up all along the procession route to facilitate people to witness the procession.  The biggest pendal would be the one put up by the Municipal Council.  The Vice President from this pendal would present a garland to the Maharaja.  Dr. Annajappa on Dhanvantri Raod would put up the next biggest pendal; he was highly regarded and was an important citizen of Mysore city.  He had the highest respect for the Mysore kings.

Torch light parade was held in the parade grounds.  The Maharaja would change to his riding clothes and make an entry on horse back to the parade ground to receive the salute by his military units.  As it would be dusk, lights would be lit up to welcome the king and the military officials.  Only military units would participate in this organized parade.  The main purpose of this parade was to instill confidence in the people and also to showcase the military capability of the ruling king to the unknown enemies.

The show with lights, colors and royalty was in a class of its own and much appreciated by the visiting dignitaries and foreign tourists.  The grand finale would be the military band playing the national anthem of then State of Mysore.

After the completion of the torch light parade the king would change into his traditional clothes.  The king would offer prayers to the Banni tree at Bannimantap and to all the weapons that would have been sent earlier to Bannimantap along with the state horses and elephant.  The Maharaja would perform puja to the Banni tree, and carry a branch of this tree back to the palace. 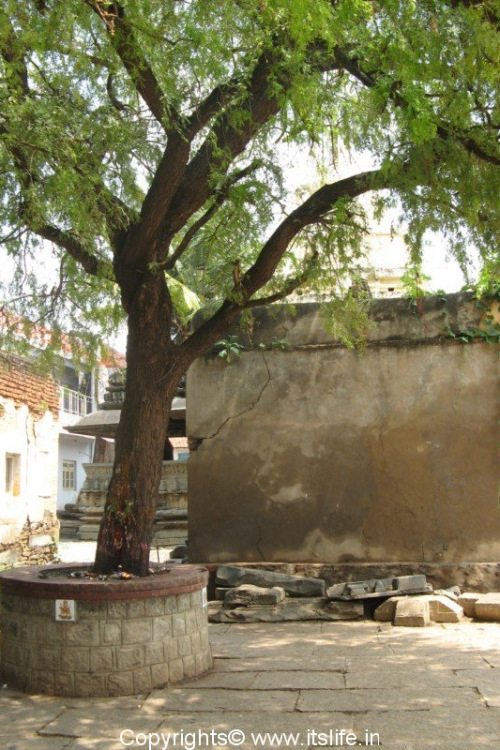 Ol Team…Thanks for the comment. I will check your blog soon.

Thanks Rajachandra, the readers are greatly benefited by your feedback.

Thanks once again.
Shantha

Dear Shantha,
Your information is of much help to me as I came to Mysore specially for this yearly event. Do you know of any photoshops/photographers in town who might still have old photographs of the Dessara procession of for instance before Independance? Such pictures would give me perhaps also a good insight of possible changes of the Dessara in the past decades.

Hi Rene Brus,
Greetings from Karnataka and a warm welcome to Mysore. Thank you for visiting the website. Please access the following link to view some old pictures of Mysore Dasara – http://mysoresamachar.com/dasara_photos.htm, please contact them to buy the pictures.

Also please visit Mysore Palace, the paintings there brings alive the pageantry of the procession during the reign of the kings.
Wish you a pleasant stay at Mysore,
Regards,
Shantha

[…] Connoisseur King Also see this for a nice account of Dasara…. nostalgia Dasara Procession and Torch Light Parade during the reign of the Wodeyars | itslife.in Attached […]

Hi this is manadhii……
dasara procession and torch light parade during the reign of the wodeyers…..
so nice of you to write about this…..

I had witnessed the Dasara jamboo Savari in 1967 when HH Sri Jayachanaraja Wodeyar was the Maharaja of Mysore.At that time I was doing some course in St.Mary’s institute just opposite Bannimantap gardens.I witnessed the program held in Bannimantap gardens as how Maharaja was performing the torch light parade there.Even witness jamboo Savari which started from the Palace at 3 pm
It was nice to watch as how people of Mysore adore their Raja Jayachamaraja Wodeyar as their house God.
I miss all these now

Thanks for sharing your experience. I hope you can revisit Dasara celebrations in Mysore.