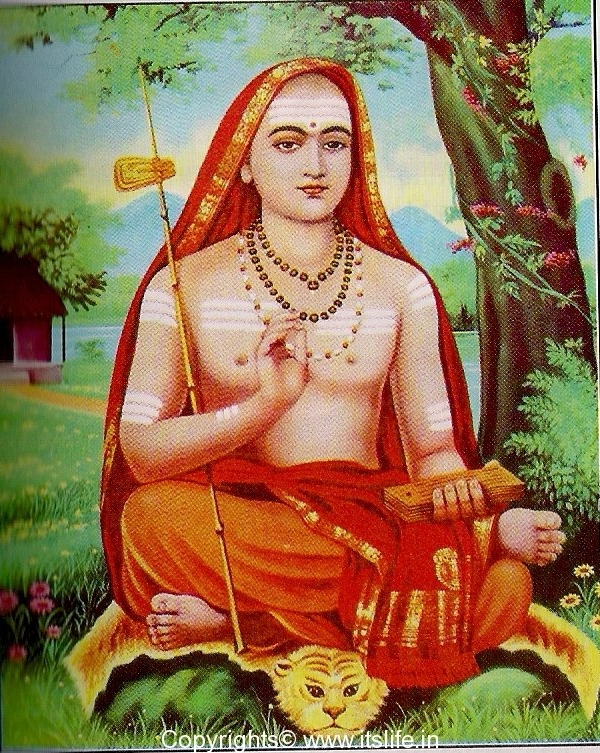 Adi Shankaracharya the founder of the Advaita philosophy begins his Gurustotram or Verses to the Guru with the above  Sanskrit shloka (verse) and the meaning of this shloka is – “Guru/Master is the creator Brahma, Guru is the preserver Vishnu, Guru is the destroyer Shiva, Guru is directly the supreme spirit and I offer my salutations to this Guru”. 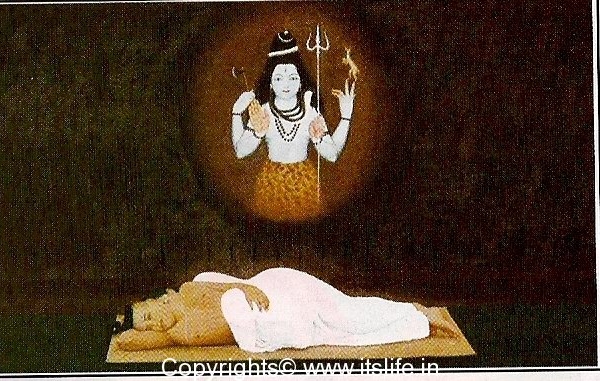 Picture –  Shiva appeared in the dreams of the childless couple (parents of Adi Shankara), and offered them a choice: a mediocre son who would live a long life, or an extraordinary son who would not live long.  Both of them chose the later.

Adi Shankara was born in 788 CE in Kalady, Kerala to father Kaippilly Sivaguru Nambudiri and mother Aryambya Antharjanam.  Adi Shankaracharya Jayanthi falls on the 5th day of Hindu month Vaisakh.  May – June in the Gregorian Calendar.  This year (2020) it is on April 28th.  On this day his works are read with meditation and special pooja to Adi Shankaracharya, one of the greatest philosopher.  He is considered as the incarnation of Lord Shiva/Shankara. 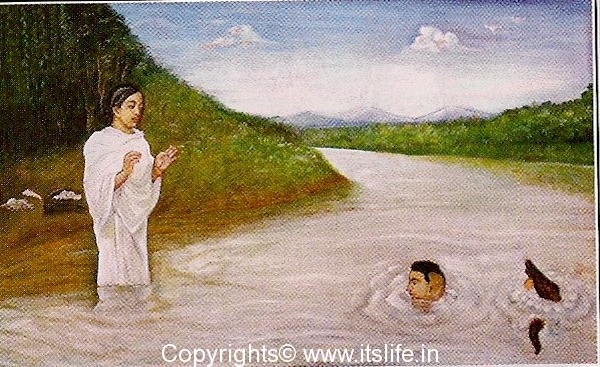 Picture – A crocodile caught hold of Adi Shankara’s leg in river Poorna when he was 8 and he pleaded his mother to grant him  permission to become a sanyasi. His mother gave him the consent and the crocodile let go of his leg.

When Shankaracharya was a young child he yearned to be a Sanyasi and was detached from all worldly matters.  His thirst for spiritual knowledge made him renounce the world and master the vedas, puranas and the epics. 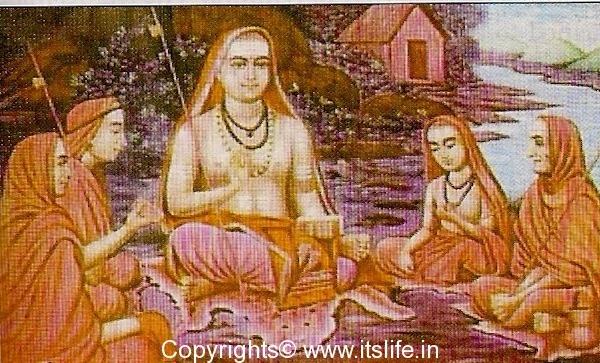 In his pursuit to spread his philosophy he traveled all over India and established four mathas/religious institutions in the four corners of India. The mathas established by Ādi Śankara are: 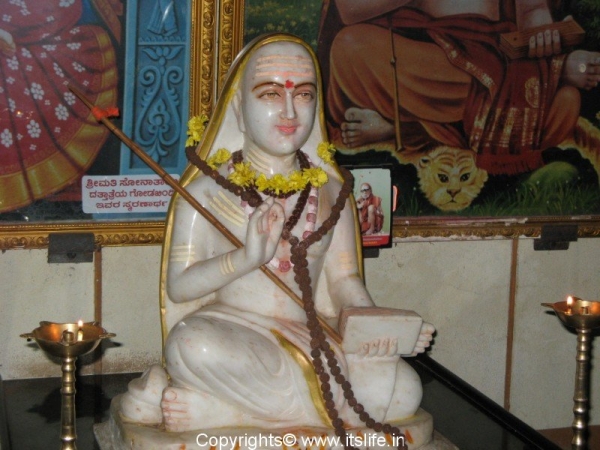 The heads of these above four institutions are considered the principal Shankaracharyas.  Govinda Bhagvatapada became his Guru and under his guidance he learnt all forms of Yoga and Brahma.  He was known as Adi Shankaracharya, the person who would be responsible to spread the Brahma Sutras all over the world.

Adi Shankara is believed to be the founder of the Dashanami monastic order and the Shanmata tradition of worship.  He has written many commentaries on the Vedic Canon (Brahma Sutra, Principal Upanishads and Bhagavadgita) in support of his thesis.

Adi Shankara travelled to the Himalayan area of Kedarnath-Badrinath and attained videha mukti/freedom from embodiment. There is a samadhi mandir dedicated to Adi Shankara behind the Kedarnath temple in Uttaranchal.

I respect your desire to talk about your religious beliefs. I was mostly interested in your blog as a foodie blog and will unsubscribe.

Just thought I would let you know 🙂

Namaskara/Salutations Phil,
Let me clear few things –
1. The blog was never meant to be a food blog
2. I don’t write about my religious beliefs – I write about festivals that includes festivals of all religions. For Example – http://www.itslife.in/2008/12/christmas
3. Thanks for following till now and thanks for unsubscribing
Regards,
Shantha

Pranams Shantha,
Thanks for the write up on the AcharyaJI, We would have been deprived if Adi Sankara would not have been born, The world would have lost the essence of Brahma Sutras, Upanishads, etc., Please keep up the good work,
Regards,
Krishna V
http://www.samatabooks.com

Namaskara Krishna,
Thanks for your comment….I feel the least that we can do is remember the great saints and their work on these special occasions.
Regards,
Shantha

Namaskarams Shantha,
Yes we should remember the great saints India has produced. The whole world is basking in the glory of Adi Sankaracharya. We have a rich cultural heritage. No Wonder People from Other countries are interested to learn a lot from the teachers here.
Regards,
Krishna

I would like to reproduce the statue of Shankara in a text book for Australian students. Could you provide contact details so my publisher can contact you; and tell me where the statue is.

hi Shantha…
do you have any idea about kumbha mela??
what is the reason of functioning it and wats the thing going on during it..waiting for ur reply!!have many questions to ask u!!

Hi CBSK,
I have never attended a Kumbha mela and I do not know much about it as it is held in the northern parts of India. The only thing I know is that as Garuda was flying with Amurtha Kumbha / Nectar pot, few drops of the nectar fell into the River Ganges. The muhurtha / time when this nectar fell into the river is the day that the Kumbha mela is held.
Regards,
Shantha

The kirtan or bhajan that you have mentioned has been created by someone using the different names of Hindu Gods like Shiva the destroyer, Brahma the creator and Vishnu (Shyam / Krishma and Rama) the protector prefixed by Omkara.

You are right! I am not sure whether it is a kirtan or a bhajan. In the late 50´s or 60´s the Swami Guru Devanand Saraswati Ji Maharaj brought to America an LP with this beautiful and inspiring sacred song. When the Guru was alive I did not think to ask him about the song. Now that he is not around I do not have anyone to ask. Once I was told that the song was interpreted by the Jyotirmath swamis. I have the recording in cassette, but the sound quality is very poor and now I want to get… Read more »

Hi Manuel, I really am not an expert to comment on this. We have been bought up listening to many Carnatic, devotional and Aarathi songs. When we worship god it is always accompanied by shlokas, bells ringing and many times ends with a bhajan. We also do Japa / meditate by constantly chanting the names of god in the mind using a japa mani / rosary. The other type of meditation where you sit closing your eyes, not thinking of anything and deep breathing that the Gurus preach is not something we follow. I suppose your questions can be answered… Read more »

The description you make about the type of meditation we do is correct, except by the fact that we do think about something and that is the Mantra that is given to each one of us by our Guru.

I really thank you for the effort you did to give me a tip about the song´s issue.

I will be visiting your site often. Namaste.

I would like to use this photo for a Yoga website please. Its beautiful and will be used for non-commercial purposes in the bio of a Yoga teachers Dhananjay Pandey – I will email the link as soon as its done…. can I use it?

Sure Rajati you can use the picture.
Regards,
Shantha

Thank you so much to publiish this. It is inspiring to note about Adi Shankara & ave visited the Sringeri Math. It is amazing. Please also let me to know more about the teachings of Adi Shankara. Thanks

Hi Raj,
Thank you for leaving this note.

I am too small to write about teachings of Adi Shankara. There are many books available written by experts, please try to buy them or rent from libraries.
Regards,
Shantha

Good article.. Keep the sanatana Dharma going mate. Nothing to worry about some threatening to leave the blog!

Hi Kalyan,
Thanks for the encouraging words.
Regards,
Shantha