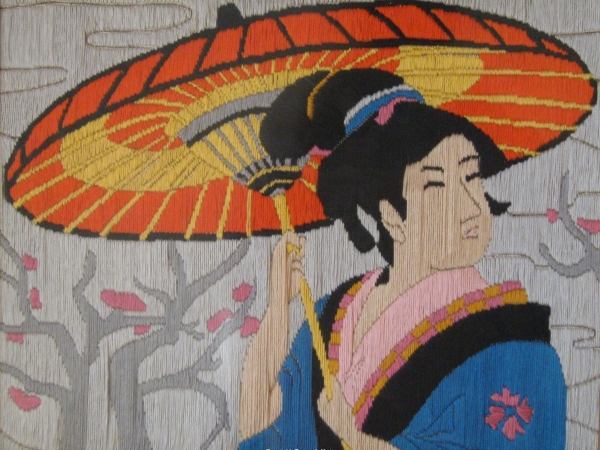 History of Ikebana
During the early part of the 7th century, the message of the Buddha kindled a new flame in the hearts of the nature-loving Japanese. The emissary of Prince Shotuko, returning from China brought back with him the idea of offering arranged flowers to Buddha. Thus, Ikebana began as a kind of ritual flower offering made in Buddhist temples in Japan as a means of achieving tranquility of soul. In these arrangements, both the flowers and the branches were made to point toward heaven as an indication of faith. The emissary – a gifted painter and sculptor named Ono-no-imoko – was so deeply affected by the idea that he retired to live beside a lake(Ike) in Kyoto and became a priest(bo) dedicating himself to the task of recreating the soul of nature in his offerings at the shrine of the Buddha. 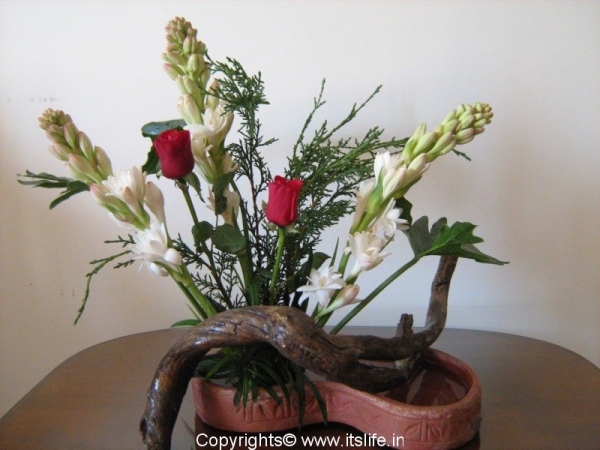 This was the foundation of what subsequently became the famous “Ikenobo School” and the beginning of Ikebana in Japan which influenced the nation and added spirituality which so often moved even the most warlike Samurai to rare acts of gentility. For almost 800 years the art was passed on from individual to individual and it was only in the 15th Century that the 31st Ikenobo meaning “Priest By the Lake” organized a school and made the art available to the public. The headquarters of this school is at the same spot where the first Ikenobo lived.

A more sophisticated style of flower arrangement, called Rikka i.e., “Standing Flowers” was practiced in the 15th Centruy. This highly stylized form was popular for temple arrangements, which “through its massiveness and elaborateness re-enacted Nature’s grandeur, might and majesty”. This technique has become obsolete.

In the 16th Centruy a more simple style was practiced called “Nageire” meaning to throw in or fling flowers in a tall container. This arrangement is used during tea ceremony and is also called “Cha-bana” – meaning tea flowers. 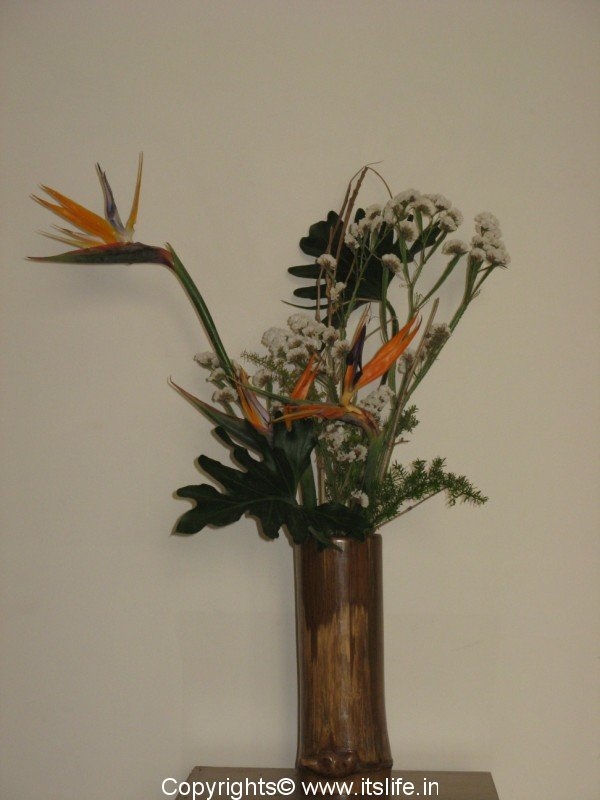 Ikebana in the 19th and 20th Century is more expressive and uses different kinds of material to form an arrangement.

This style is linear in composition. They emphasize on lines. It has form, rhythm and color combination. It is asymmetrical and against wall arrangement. One can express one’s own moods through Japanese style. They are also scenic and the arrangements are done according to seasons. There are many schools of Ikebana and the most popular one’s are “So-Getsu” and “Ohara“.

makes me smile for for i remember my teacher in high school teaching us to do the Japanese flower arrangement.

U attended any classes for IKEBANA is it? Terms are very new to me… But arrangement looks nice.. 🙂