Vata Savitri Vrata / ritual is observed by married women on Hunnime / Poornima / full moon day in the Hindu month of Jyeshtha, May – June in Gregorian calendar.  This year (2016) it falls on 18th June.  On this day it is believed that princess Savitri bought back her husband Satyavan from the clutches of Yama the god of death through her devotion and prayers.  Vata means “Banyan tree” in Sanskrit under which Satyavan got his life back.  This has been observed for the past 500 years in India. 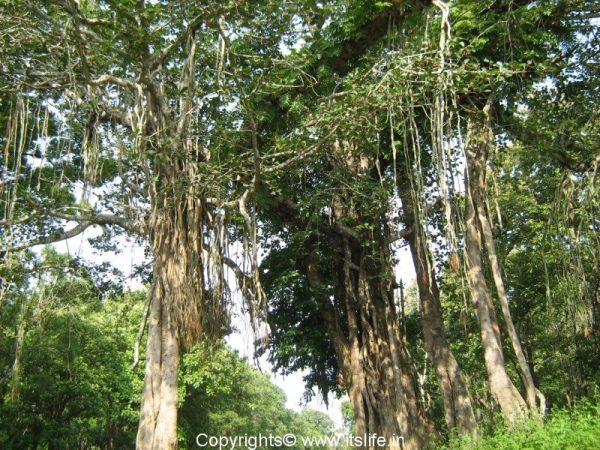 This festival is very popular in Maharashtra.  On this day women wake up early, take bath, fast and deck themselves up with bridal clothes and jewelry.  After offering pooja to Savitri in their home shrines for their husband’s long life, the women in groups go to the Banyan tree and worship the tree.  They go around the tree 5 times tying a red thread all around the tree and in the end water the tree.  Kheer / Rice pudding is prepared and offered to the tree along with fruits.  The women listen to the story of Satyavan Savitri with rapt attention.  After the rituals, fruits, clothes and other articles are given to other women along with auspicious items like Turmeric powder, Kumkum / Vermilion colored powder etc.,

Legend associated with this festival:
A king named Aswapati once ruled the region between Northeast India and Nepal.  He had a beautiful daughter named Savitri.  The princess fell in love with the handsome Satyavan living in exile in the forests with his blind father Dyumatsena and mother.  Satyavan was known for his truthful virtues and generosity.

When Aswapati got to know of his daughter’s choice, Narada, the revered sage of the gods and goddesses appeared and informed Aswapati that Satyavan’s life would end in a year.  Love struck  Savitri defends Satyavan and insists on marrying him.  They get married and live happily for 11 months and 29 days.

Savitri was tense and aware as the day of Satyavan’s death came nearer.  On the day he was supposed to die she fasts and prays with atmost devotion.  She accompanies Satyavan on that day into the forests for woodcutting. Savitri waits under the Banyan tree as Satyavan goes around cutting wood.  After sometime Satyavan comes and lies down with his head on Savitri’s lap and expresses tiredness.

Few minutes later, Lord Yama, appears and informs that he has come to take Satyavan’s soul as his time of death has come.  Savitri pleads to spare her husband’s life but Yama firmly takes Satyavan’s soul and startsto walk away, Savitri follows him and Yama irked by this reprimands Savitri to go back.  Not to be intimidated by Yama, she continues to walk behind Yama, asking him to take her too as she could not bear to live without Satyavan.  Yama pleased with her devotion gently asks her to ask for three boons, anything except for the life of Satyavan.

Savitri asks that the eyesight of her father-in-law be restored, Yama grants the boon…next she asks for her father-in-law’s kingdom be restored back to him…Yama smiles and grants the boon….then she asks for children…Yama grants this wish too without batting an eyelid.  Savitri then asks Yama how she can have children if Satyavan dies! Yama relents and sets Satyavan’s soul free.  Savitri runs back to the tree where Satyavan was sleeping.  After sometime, Satyavan wakes up as though from a deep slumber.  They are overjoyed and live happily ever after.

Yoga in Himalayas, Thanks for visiting,
Regards,
Shantha