I remember guests who would visit us at Mysore would always wish to take away a Sandalwood article as a memento and we would take them to Cauvery handicrafts to take their pick. Sandalwood is synonymous with Karnataka as it grows in abundance in the wild. The tree is known as Shreegandha in Kannada and Chandan in Hindi. The forest area on the Karnataka, Tamil Nadu and Kerala borders contributes the maximum of the world production of Sandalwood tree. The wood grown in the Mysore region is considered the best quality of wood. The state tree of Karnataka is undoubtedly the Sandalwood Tree.

Other species of the same wood are grown in Australia, Indonesia, and the Pacific Islands. 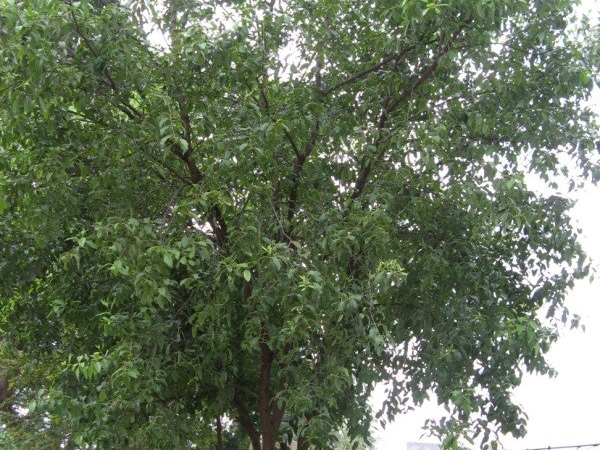 The botanical name is Santalum Album more commonly known as Indian Sandalwood. The wood and roots of this tree is the most expensive of all trees due to its medicinal and fragrance properties. Due to this, smuggling of Sandalwood trees has been very common in the Sandalwood growing regions.

The wood of mature Sandalwood trees is used in handicrafts, to make incense sticks, and to extract Sandalwood paste and powder for cosmetic purposes. Sandalwood is a natural body coolant. From the roots is extracted the precious Sandalwood Oil, which is used in Ayurveda, Soap industry, Aroma Therapy and for production of perfumes. The tree grows in places with cool climate, moderate rainfall, and copious sunshine. The tree is a root parasite as the plant latches on to the roots of another tree for nourishment. A Sandalwood tree is growing opposite our house in Mysore latched on to a Honge / Indian Beech tree. I hope both the trees adopt the saying “Live and Let Live!” The color of the bark is a variation of Yellow and now known as Sandalwood color. All the heritage buildings in Mysore are painted in the Sandalwood color.  The flowers of the tree are very tiny and maroon with flecks of white in the middle. This is the only wood, which retains the fragrance for many years. A Sandalwood piece is present in all Hindu households. This piece is rubbed on a stone known as “Sane Kallu” with water to extract the Sandalwood Paste. This is applied on the idols of gods and goddesses after the abhishekha / washing of gods. In Kerala and the coastal region of Karnataka, a small piece of Sandalwood paste is distributed to all the devotees. Prayer beads / rosary are also made using Sandalwood. Buddhists light Sandalwood incense sticks while praying. Parsis feed their sacred fires in the temple with Sandalwood pieces.

Please enquire in nurseries for saplings.

I need sandalwood plants. please let me know the details.

please send the details of plantation of chandan plants.ranchi (jharkhand) climate and soil issuitable or not suggest me.

Please contact the nearest nursery around your region and consult a horticulturist who is familiar with your region.

i see that many have asked for plant / saplings of sandalwood.

suggest you visit the following website… they are doing lot of work in this space and you will get plants.

Hi Ashok,
Thanks for visiting and sharing the link.
Regards,
Shantha

i have many innovative ideas regarding theme-based and customized tree-plantation , call me if sincere, sumit 91-9425605432, nature-lover and English to HINDI translation Freelancer

Hello anybody happens to know which host plant seems to be the best for growing sandalwood plant? Thanks.